Coca-Cola Amatil fears its secret bottled water source in the NSW Southern Highlands is under threat from a major sand mine proposed for neighbouring land.

The beverages giant — which manufactures popular brands Mount Franklin and Pump — is alarmed at the quarry's potential to pollute its pristine water source and stress water supplies in the area. 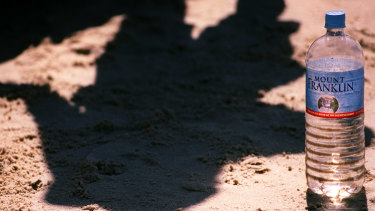 There are fears springs that supply the country’s most popular bottled water brands are in jeopardy. Credit:Virginia Star

In a submission to the NSW Department of Planning, Coca-Cola Amatil expressed concern that more than nine million cubic metres of fill would need to be sourced from “thousands of sites” across NSW to fill the void left by the quarry at Sutton Forest.

This could lead to "potential future contamination of the regional aquifer given the contents of future fill", the company warned.

Its closest drinking water bores are two kilometres from the western boundary of the proposed quarry, about 15 kilometres south-west of Bowral.

"The availability, consistency, reliability and quality of the water extracted at all of our sites is integral to our business and our customers," a Coca-Cola Amatil spokesperson told the Herald.

Until now, the location of Coca-Cola’s drinking water source has been a closely guarded company secret.

“These operations have been conducted continuously over the past 10 years and we consider such operations to continue over the long-term,” its submission said.

Sutton Forest Quarries Pty Ltd is seeking approval to mine 29 million tonnes of sand from 47 hectares of privately owned land near the Hume Highway.

The company is a joint venture between Tulla Resources and Sydney businessman Patrick Hallinan.

An environmental impact statement said the quarry would have a 45-year life span, with disturbed areas progressively rehabilitated.

The EIS attracted seven letters of support and 426 objections, including concerns about its location within Sydney’s drinking water catchment.

The NSW Office of Environment and Heritage warned there was insufficient detail over how an Aboriginal rock art site would be protected. It also argued the project should be referred to the Commonwealth because of its nationally significant impacts on threatened species, including koalas.

The EIS deemed such a referral unnecessary.

Wingecarribee Council warned about 20 months of data used for the groundwater modelling was potentially erroneous, putting the "highly productive" aquifer at risk.

The NSW EPA said the full range of water pollutant risks from crushing sandstone had not been properly considered, while NSW Health warned about the potential for excessive dust emissions at a nearby monastery.

The proposed quarry lies next to Tennyson Park, a property where Coca-Cola Amatil sources water for its bottling plant at Northmead. 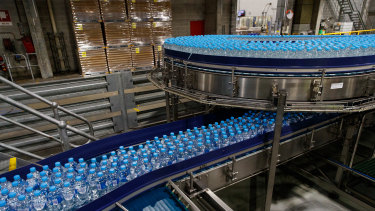 Coca-Cola is concerned the proposed mine would affect water quality

Coca-Cola Amatil said its bores were too deep to be directly compromised by the quarry’s operations.

However, in addition to its concerns about contamination, it was worried the quarry would put pressure on local groundwater supplies, which are harnessed by farmers for irrigation.

"These concerns were based on the results of an independent environmental assessment of impacts on our property," a company spokesperson said.

He said “unending” groundwater pollution issues had followed the closure of the nearby Berrima mine.

“They were probably one of the first miners closing down a coal mine to be held accountable and years later they’re still working on it,” Dr Wright said. “It really shows it's actually a problem that you can never fully solve.”

Sutton Forest Quarry’s experts said the operation would employ 20 people and was needed to satisfy the Sydney construction market’s voracious appetite for sand, with about 6 million tonnes used annually.

They found no evidence the quarry would lead to any significant change in local groundwater quality and said a strict monitoring regime would be in place.

They rejected suggestions the quarry would place unacceptable demands on the water table, finding it would drop less than half a metre at the most affected bores.

However, a risk assessment noted a “medium” chance dirty or contaminated water could escape the quarry into local creeks.

The Herald’s questions regarding the quarry were directed to Hi-Quality Group, which recently assumed management control of the project.

A spokesperson said it was working on a response to the submissions, likely to be finished early next year.

“An extensive review of the project has been undertaken,” the spokesperson said.

“Consequently, the project is currently being redesigned via the response to submissions process to minimise environmental and community impacts, including groundwater and biodiversity impacts.”

The Department of Planning will make a recommendation before referring the project to the Independent Planning Commission for a final decision.