On Thursday evening, amid a fairly typical burst of presidential Twitter activity, President Trump retweeted two recent posts from the account of Angela Stanton-King, a Republican congressional candidate who has repeatedly used her social media feeds to promote content related to QAnon and other fringe conspiracy theories, including wildly implausible internet rumors about sex trafficking of children.

Trump has also flirted with QAnon memes on social media, although his retweets of Stanton-King were not related to the loosely knit group whose followers have been described by the FBI as “conspiracy theory-driven domestic extremists.”

In the first tweet, which was originally posted last week, Stanton-King describes herself as “a proud Black woman who supports @realDonaldTrump” and is “done with the Democrat Party lying to my community.” Stanton-King is running in the Georgia congressional district that was represented by the late John Lewis.

Trump also passed along her tweet citing recently reported police data showing that Chicago experienced a 139 percent increase in murders this July compared to the same month last year. “Barack Obama, Joe Biden, and every single NBA player are silent,” Stanton-King charged in the second tweet. “They don’t care about black lives. They care about capitalizing on black lives!”

Stanton-King, who served over two years in prison following a 2004 conviction on federal conspiracy charges related to her role in a vehicle theft ring, was pardoned by Trump earlier this year and has since appeared at the White House along with a handful of other Black Trump supporters.

“I have never run for office, and I don’t have political experience,” Stanton-King told the Atlanta Journal-Constitution Back in March. “But I do have life experiences.”

According to the Atlanta Journal-Constitution, Stanton-King, 43, is a native of Buffalo, N.Y., and the goddaughter of former Georgia state Rep. Alveda King, a niece of Rev. Martin Luther King Jr. and an antiabortion advocate. She said she would fight against what she calls “a Democratic war in support of abortion,” and that criminal justice reform would be a big part of her agenda, noting that during her time in prison she gave birth to a daughter and lost both her mother and grandmother.

Like the president, Stanton-King — who also dabbled in reality TV before pursuing a career in politics —  is prolific on social media. Besides parroting many of Trump’s favorite talking points, she has frequently repeated ideas related to QAnon, thepro-Trump conspiracy theory centered on the belief that Trump is secretly working to  dismantle an international child sex trafficking ring run by a cabal of “deep state” actors and global elites. 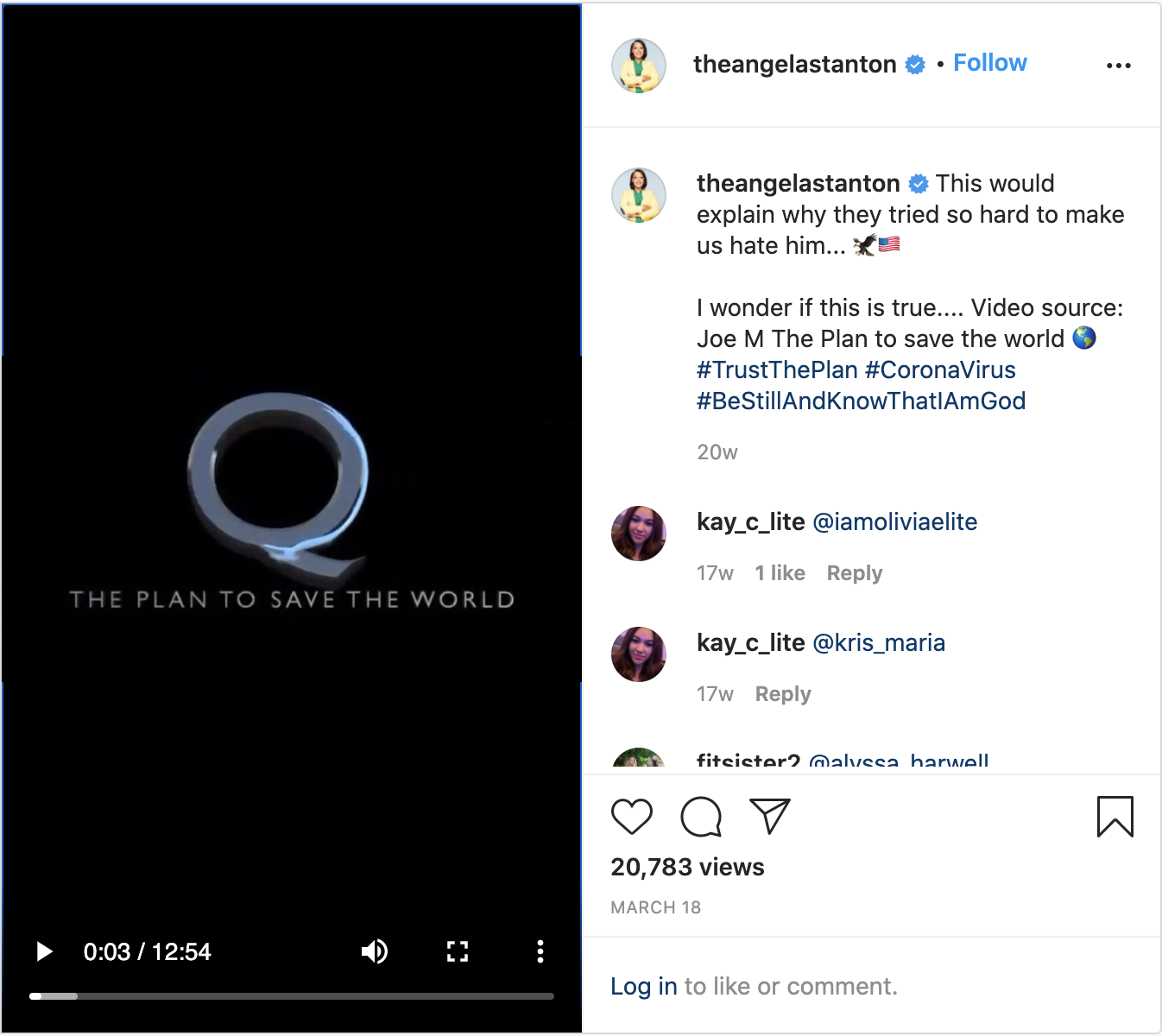 The FBI has warned that QAnon’s growing network of believers poses a potential domestic terrorism threat. In an intelligence bulletin first reported by Yahoo News last year, the bureau warned that the threat of conspiracy-theory-driven violence would likely increase leading up to the 2020 election, noting that “the advent of the Internet and social media has enabled promoters of conspiracy theories to produce and share greater volumes of material via online platforms that larger audiences of consumers can quickly and easily access.”

In June, Stanton-King ran unopposed in the Republican primary for Georgia’s Fifth Congressional District, which had long been represented by the late Democratic Rep. John Lewis, who died on July 17.  Georgia State Sen. Nikema Williams has since been selected by the state Democratic Party to replace Lewis on the ballot in November and is favored to beat Stanton-King in the heavily Democratic district, which includes most of Atlanta.

Still, while her chances of getting elected to the U.S. House of Representatives in November may be small, Stanton-King is among a growing list of QAnon-linked congressional candidates who’ve managed to secure a spot on the general election ballot this year. According to federal election records, Stanton-King’s campaign has received $2,200.00 from the Republican National Committee and $2,800 from the Georgia Republican Party. 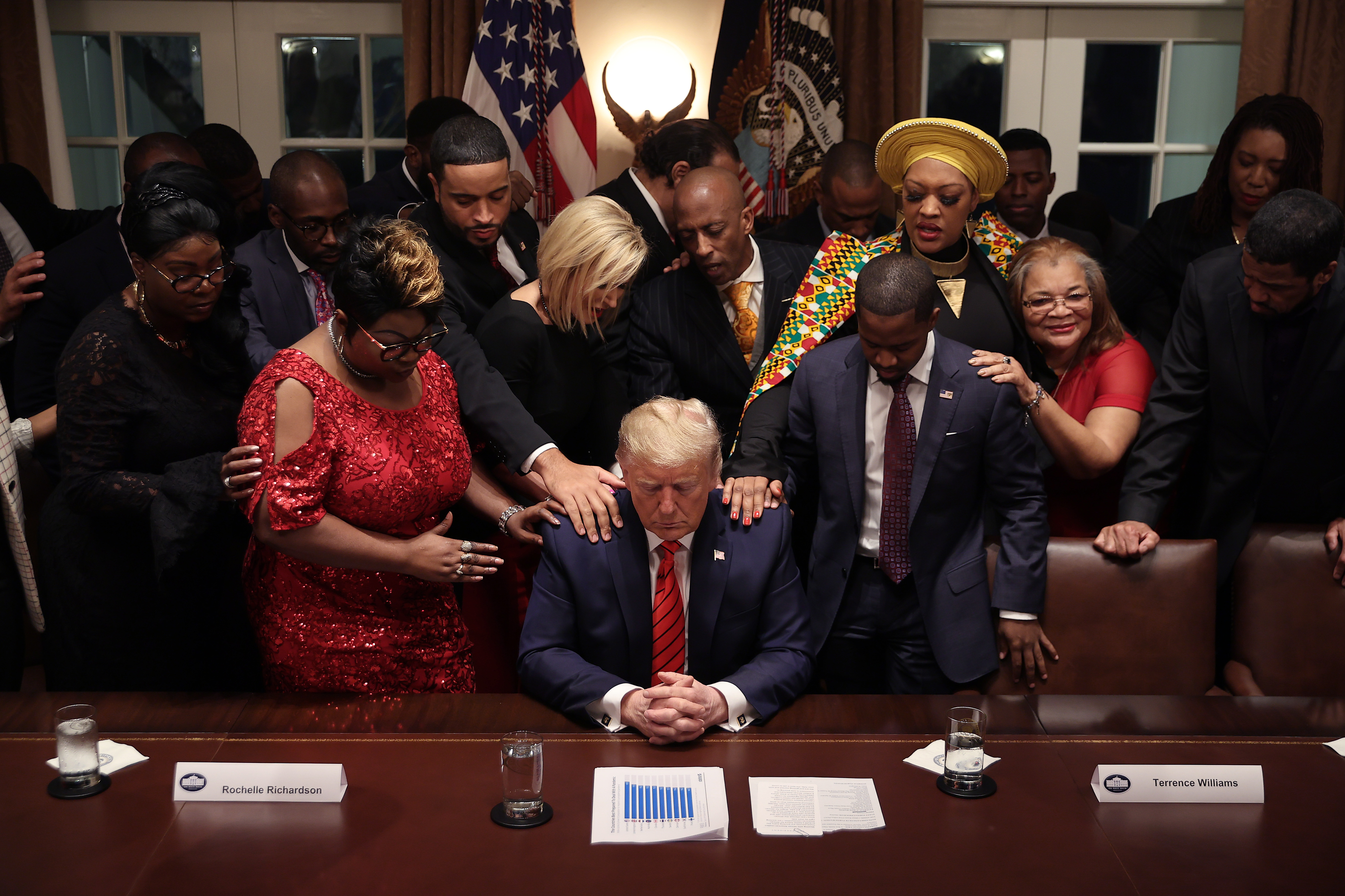 On Twitter and Instagram, Stanton-King has posted QAnon-related videos as well as the movement’s well-known hashtags and slogans, such as “Trust the Plan” and “Where We Go One We Go All,” or #WWG1WGA. In a statement to the Associated Press last month, Stanton-King disputed the notion that such posts are evidence that she is an adherent of the movement, suggesting instead that she’s used the QAnon hashtags “to extend her reach” on social media.

Nonetheless, Stanton-King has continued to promote the core beliefs and language used by QAnon followers, tweeting on July 11, for example, about “Globbal [sic] elite pedophiles trafficking children.” On Thursday evening, after Trump’s back-to-back retweets had already brought Stanton-King to the attention of his 84.8 million followers, she tweeted in all caps, “THE STORM IS HERE,” a popular QAnon rallying cry. In Q parlance, “the storm” refers to the highly anticipated moment when former presidents and other members of the “deep state” and global elite are rounded up for their alleged involvement in pedophilia and child sex trafficking rings.

In an emailed response to questions from Yahoo News Friday, Stanton-King again denied having any association with QAnon, writing, “I am familiar with the name only. I am not familiar with the group, movement or any of its core principles or beliefs.

“I have an obligation to listen to my constituents,” Stanton-King continued in her statement to Yahoo News. “It is their right to express their concerns and my job [to] look into them.”

QAnon isn’t the only fringe conspiracy theory Stanton-King’s social media posts have touched on. Other recent tweets have included references to an older, thoroughly disputed internet rumor known as Pizzagate, which claimed that prominent Democrats including Hillary Clinton and John Podesta were running a child sex ring out of a Washington, D.C., pizza parlor. She has also made reference to a current, thoroughly debunked rumor that  the  online furniture retailer Wayfair is a front for child prostitution.

“Did Ghislane Maxwell tip authorities off about #Wayfair?” Stanton-King tweeted on July 10. Maxwell, a British socialite and longtime companion of the late Jeffrey Epstein, was indicted earlier this year by the U.S. attorney for the Southern District of New York for her alleged involvement in Epstein’s recruitment and sex trafficking of underage girls. Trump, who has known both Maxwell and Epstein socially for years, has said of Maxwell, who is in jail awaiting trial, “I wish her well. … Let them [Department of Justice] prove somebody was guilty.”

With regard to her posts about the Wayfair conspiracy, Stanton-King told Yahoo News, “There are major concerns of pedophilia and child trafficking.  For me, if there is an implication of danger towards children anywhere, no matter the source, I’m on the front lines against it.”

According to a report by the Washington Post on the rapid online spread of the baseless Wayfair claims, “An increase in calls prompted by the [Wayfair] conspiracy theory is straining the National Human Trafficking Hotline, which provides emergency help to victims.”

Yahoo News sent requests to spokespeople for both the White House and Trump’s reelection campaign for comment on this story. Neither has responded.