An immunisation expert has said Australia should congratulate itself for achieving a day without new local cases – even though we know that run will end today.

On Sunday, although NSW Health flagged they had detected a new case after the reporting cut-off, all states and territories recorded no new local cases during their 24-hour reporting period.

The last time the stat was recorded was June 9, before Victoria's second wave.

"It's absolutely fantastic, it's something to be proud of – different governments have achieved it in different ways, but we have to congratulate them," Professor Robert Booy, immunisation expert at University of Sydney, told Ben Fordham on 2GB.

"If we had the same rate of disease, we would be having thousands of cases every day," he said, advocating for a reopening of the economy with strong contact tracing and social distancing.

"We've got to find that sweet spot."

Hundreds of Victorian disability homes are still without COVID safety plans, fuelling concerns outbreaks in the sector could quickly escalate into soaring numbers of coronavirus cases, in a repeat of the aged care crisis.

Health reporter Melissa Cunningham says a survey conducted by the Health and Community Services Union of more than 900 Victorian disability workers found more than one in five of the state's estimated 1400 disability homes are yet to enact COVID-safe plans.

Staff at more than 20 Victorian homes reported in a recent audit that they still did not have access to personal protective equipment such as masks. Ninety-five per cent of disability workers also voiced distress and anxiety about their working conditions.

The union has also sounded the alarm on a mental health epidemic among disability workers, after three suicides among Victorian disability workers in the past six months. All were women, including two aged in their 20s.

"It's frightening," the union's state secretary Paul Healey said. "This has never occurred in such a short space of time before and we are really concerned about the mental health stresses and the wellbeing of workers due to the pandemic." 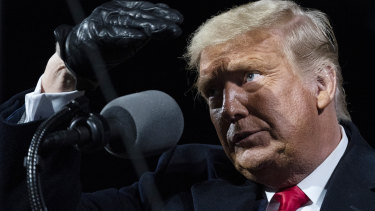 Nearly 87,000 cases were reported on Saturday, with 909 deaths and record hospitalisations for the sixth straight day in the Midwest, according to a Reuters tally. In October, 31 states set records for increases in new cases, 21 for hospitalised COVID-19 patients and 14 for record increases in deaths.

President Donald Trump, the Republican seeking re-election against Democratic challenger Joe Biden on Tuesday, downplays the virus and has accused Democrats of overblowing the pandemic that has killed more 230,000 Americans, more than any other country.

Biden and fellow Democrats have hammered Trump as a poor leader who failed to contain COVID-19 in the United States, which also leads the world in the daily average number of new cases.

Trump's false accusation Friday that doctors were profiting from COVID-19 deaths drew harsh criticism from the governor of the election battleground state of Wisconsin.

"We have a president that believes that the doctors are at fault, they're messing with the numbers and he believes that it's over. It ain't over," Democratic Governor Tony Evers told CNN's State of the Union on Sunday.

"We have hospitalisations going through the roof," he said. "We absolutely need somebody that understands that this is an issue, it's a thing. People are dying."

"These people have been risking their lives since the beginning of this crisis," she said on ABC's This Week.

Good morning and welcome to the COVID-19 blog

Hi there and welcome to our live coverage of the coronavirus pandemic for Monday November 2.

I'm Ashleigh McMillan and I'll be with you on the blog until mid-afternoon. Feel free to get in touch via email or on Twitter.

Australia's fight against COVID-19 chalked up a major win yesterday, with zero cases of local transmission recorded across the country.

But while Health Minister Greg Hunt said the country was 'on track' to have all internal borders open by Christmas, newly re-elected Premier Annastacia Palaszczuk stood firm on keeping Sydney and Victorian residents out of Queensland until at least December 1.

More than 1.2 million people have now died from the virus across the world.

Stay with us for rolling coverage of COVID-19 news throughout the day.