THE SECOND wave of Covid-19 has claimed the lives of 17 victims under the age of 40 as the elderly face the greatest risk from the killer bug, new data has revealed.

The virus is now 100 times as deadly for the elderly as it is for the young and experts have stated that “age is overwhelmingly the most important factor”, when it comes to the illness. 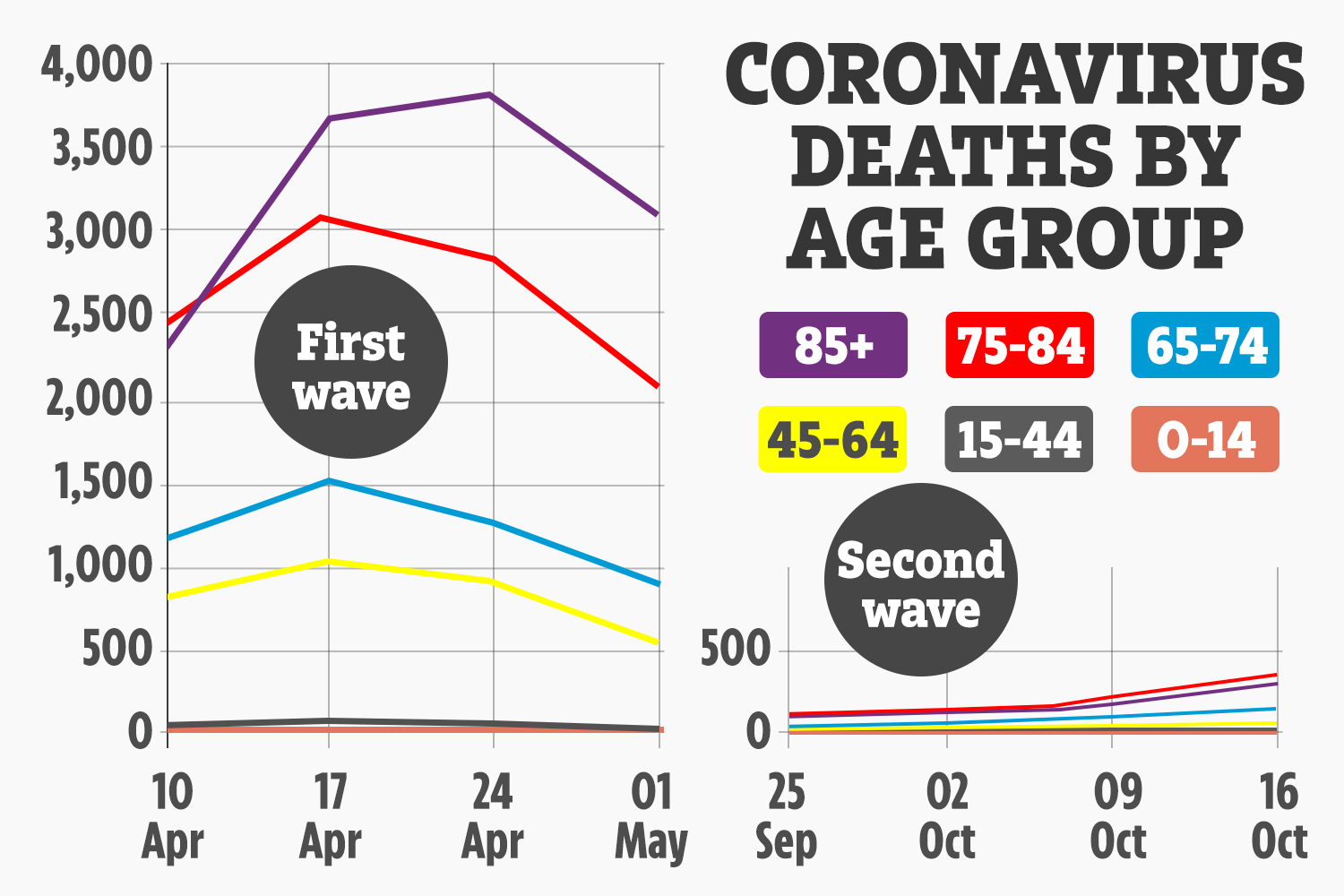 Yesterday it was reported that another 310 Brits lost their lives to the virus – while a further 24,701 people tested positive overnight.

A further 367 people were reported to have died with the virus on Tuesday – the highest number in more than five months.

The NHS data shows that including all deaths in private homes as well as hospitals, just 17 people under the age of 40 died between the end of August and the middle of October in England.

The elderly account for 94 per cent of hospital deaths.

Speaking to the Daily Mail statistician Professor David Spiegelhalter, of Cambridge University said that while young people have always got the virus more than the elderly – this hasn’t translated into hospital deaths.

He added: “Age is the overwhelmingly most important factor when it comes to the risk of dying from Covid.” 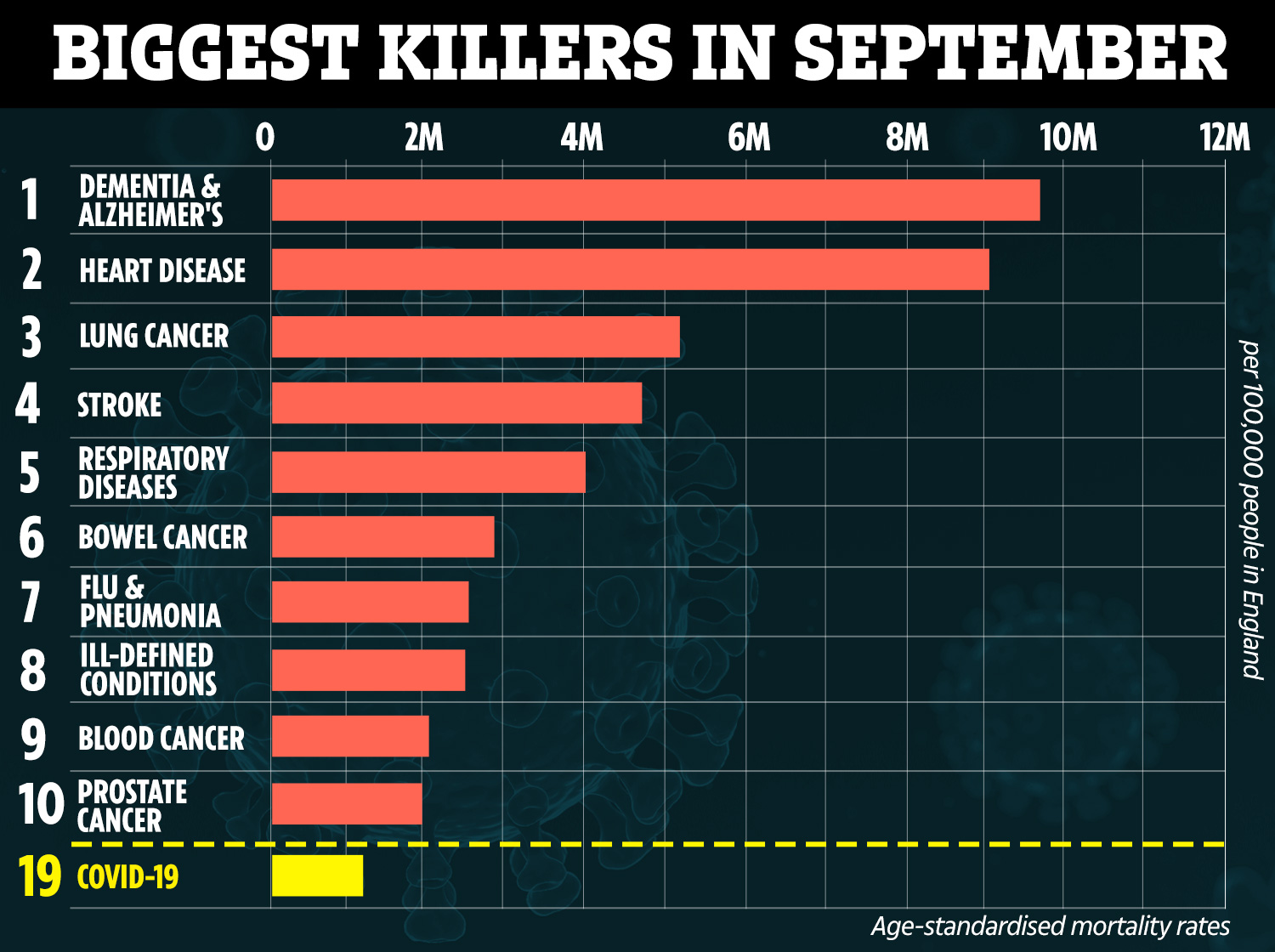 Last week it was revealed that Covid was the 19th most common killer in September, accounting for just 1.7 per cent of all deaths.

Figures from the Office for National Statistics (ONS) also revealed that most causes of death were lower than the five year average.

Comparing ONS stats with NHS data and and the ONS states that there were just 247 deaths among working-age people since the end of summer – this in comparison to 2,026 among pensioners.

Shielding had previously been introduced at the start of the national lockdown in March in order to protect the elderly.

As new Tiers have been introduced people have been advised to follow tailored guidance for their specific Tiers – with the new restrictions not being as harsh as the national lockdown.

Prime Minister Boris Johnson is set to be facing pressure from the Scientific Advisory Group for Emergencies (Sage), to impose another national lockdown in order to curb the spread.

Professor Karol Sikora last night said that “it’s a matter of balance” when it comes to imposing further restrictions.

“It's really important we don't throw all the resources at Covid”, he added.

When the pandemic first hit in the spring, deaths were low amongst younger generations.

The ONS states that with deaths in private homes as well as hospitals there were just 17 people under for those who died with Covid between August 28 and October 16.

Government scientists have predicted that the second Covid-19 wave could be even more deadly than the first with a "lower but longer peak."

Analysis from the Scientific Advisory Group for Emergencies (Sage) has caused government advisers to push Mr Johnson to take more drastic measures to control the virus.

Sage analysis also suggests the highest level of restrictions, Tier 3, may be needed across all of England by mid-December putting Christmas plans into chaos.

A projection by Government scientists suggests the toll could remain high throughout the winter and result in more fatalities than in the spring, which have now topped 61,000, according to further analysis provided by Sage.

The Sun has also revealed that the ­latest government modelling overseen by chief scientist Sir Patrick Vallance shows more than 25,000 will be in hospital with the virus by the end of November.

Cases are rising in most areas in the UK, with some areas such as Nottingham being forced into Tier 3 restrictions as infections climb.

At the peak of the pandemic more than 3,000 people a day were being admitted to hospital in the UK.

Admissions are nowhere near what they were at the peak, and are graduation rising – doubling every two weeks.

To put this in perspective, in normal times around 1,000 people are admitted to hospital a day due to respiratory issues.