Back of the (wrong) net! Over-excited defender scores spectacular goal from saved penalty… but he’s at the wrong end of the pitch

This is the hilarious moment an overzealous defender ruined their chances at a grand final win by scoring an own goal in the final seconds of the match.

The grand final match in Hornsby, Australia had come down to a vicious stalemate, with the scoreboards showing two all.

Moments before the shot a member of the audience cries out: ‘The pressures on mate, come on!’

As quiet settles over the audience the white team takes their shot, only for it to be saved with ease by the red team’s goalkeeper.

The crowd erupts into cheers as the blockage prevents a win moments before full-time is called.

As arms raise in celebration one defender takes a moment to release some of his pent up tension. 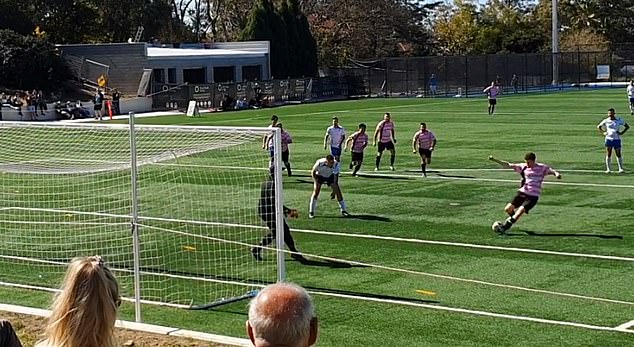 Celebration time: The defender charges at the ball delivering a poweful kick that will ultimately spell doom for his team

He rushes at the ball, no doubt to send it flying into the elated crowd, discarding it as a would be souvenir.

But disaster strikes as a momentary twitch causes him to end the ball hurtling into the back of his own team’s net.

Cheers turn to scream of disbelief and betrayal as the defender crumples as the nightmare unfolds before his eyes.

Finally the whistle is blown and the resounding disappointment echoes from the stands as the final score is settled at 3-2 to the white team.