Veteran eco-warrior ‘Swampy’ has again returned to campaigning – to sit in a 30 foot tall bamboo tower in the middle of a river to protest against the HS2 rail line.

The activist, 47, re-emerged in October this year following a ‘quiet ten years’ out of the limelight.

He is currently perched in the bamboo tower in the middle of the River Colne in Denham Country Park in Uxbridge, west London.

HS2 contractors were scheduled to start building a bridge across the river today (Mon), to connect a temporary haul road, constructed on one side of the chalk stream, to the other side.

But HS2 Rebellion campaigners have constructed the bamboo tower in the middle of the river to highlight the ‘needless and brutal destruction’ of Denham Country Park in the midst of a climate and ecological emergency (CEE).

Activists are calling on the government to act now and stop HS2 immediately.

Swampy said: ‘We are blocking this bridge from crossing the river as they cannot fell the ancient oaks on the other side without it. 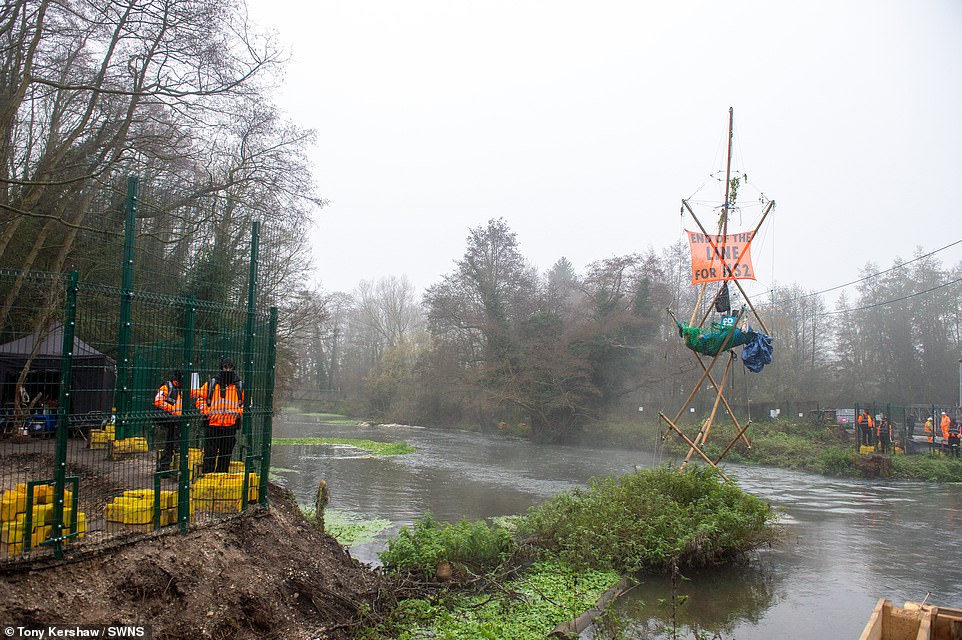 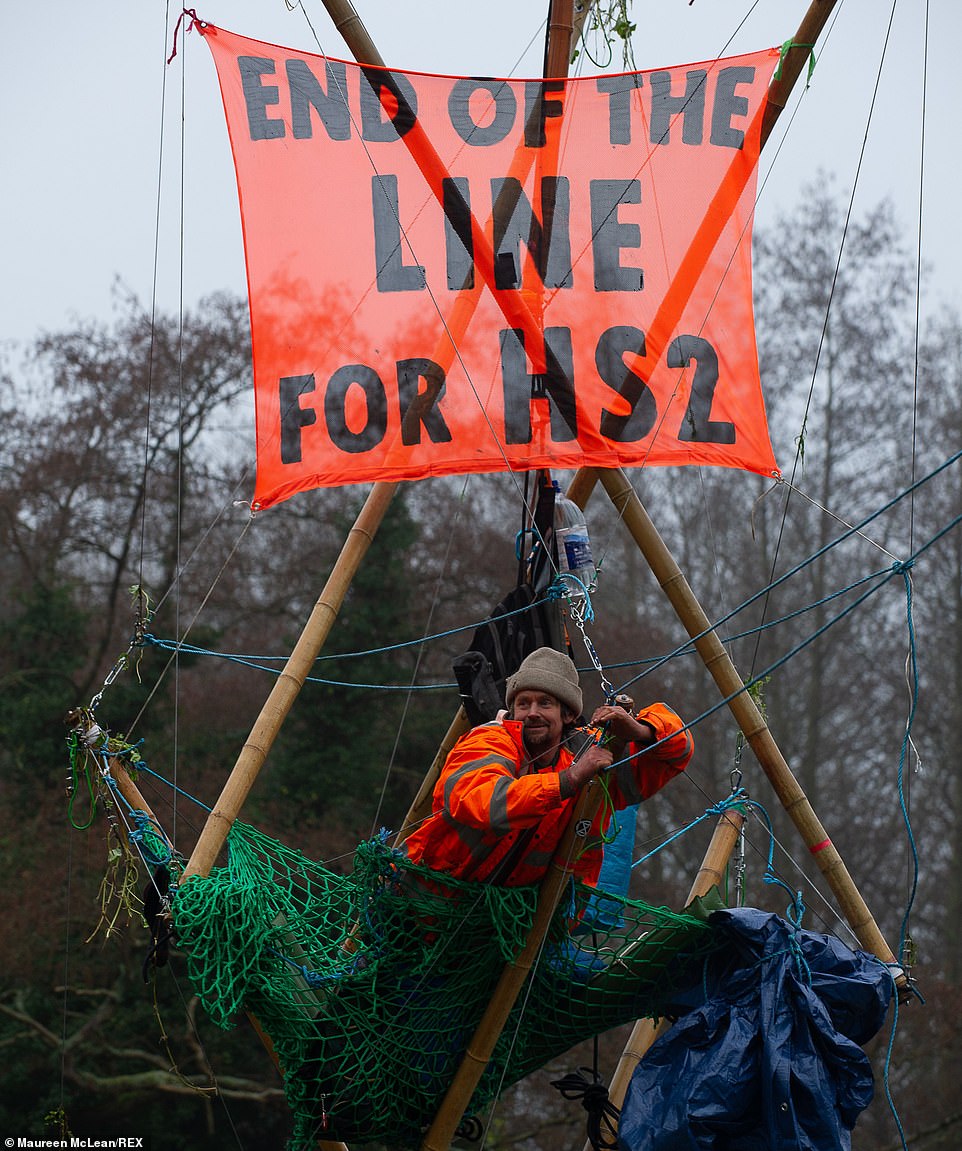 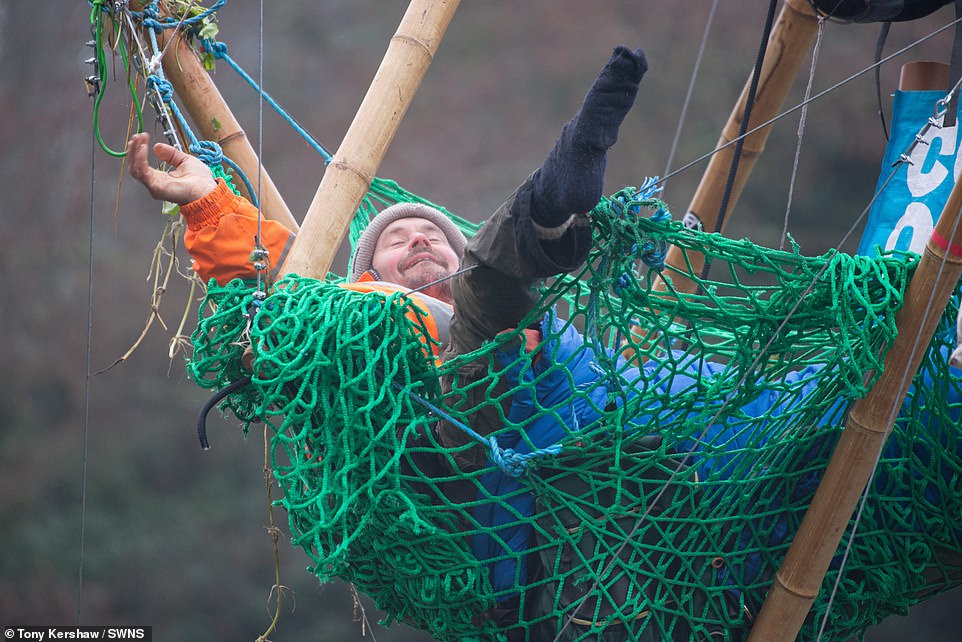 Despite the height, Swampy appeared to be enjoying himself as he placed himself in front of the path of the projected line

‘HS2 is causing devastation throughout the land and is wasting over £200 billion of public money. We are living in times of climate emergency and we will not stand for it.’

It comes just two months after he staged a sit-in for more than a week up a 70-foot tall tree in Jones’ Hill Wood in Aylesbury, Bucks. – in a protest which saw his 16-year-old son arrested.

Swampy, son of middle-class Berkshire parents Peter and Jill, was first involved in environmentalism when he became the poster boy for protests against the A34 Newbury bypass in 1996.

He then spent seven days and seven nights living in a tunnel dug by campaigners to stop the £50 million A30 dual carriageway link road in Devon a year later.

Anti-HS2 activists have also set up a protection camp on the opposite side of the river to halt woodland work and destruction of priority habitat wet woodland, campaigners say.

The public nature reserve is a designated site of scientific interest (SSSI), vital to biodiversity and home to approximately 2000 different wild species.

Sam Smithson, environmental protector, said: ‘Every single day we are witnessing the landscape drastically changing, HS2 is felling trees and irreparably destroying nature before our eyes.

‘We’re in a global climate emergency. HS2 Ltd. and the UK government are implicit in mass ecocide crime being committed. 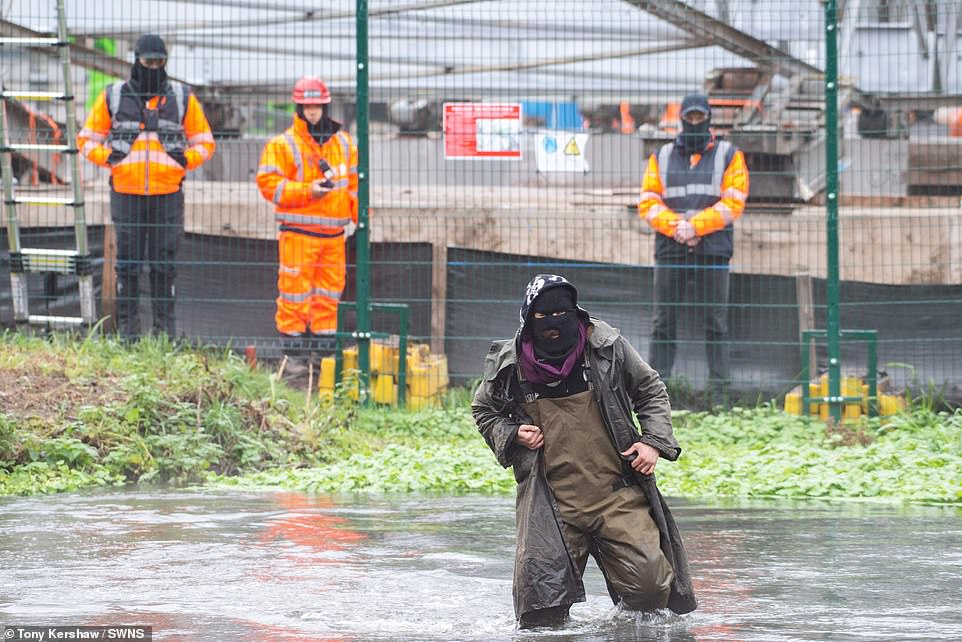 A balaclava clad activist, dressed in waders and a waterproof coat, gets into the river to help with the protest tower 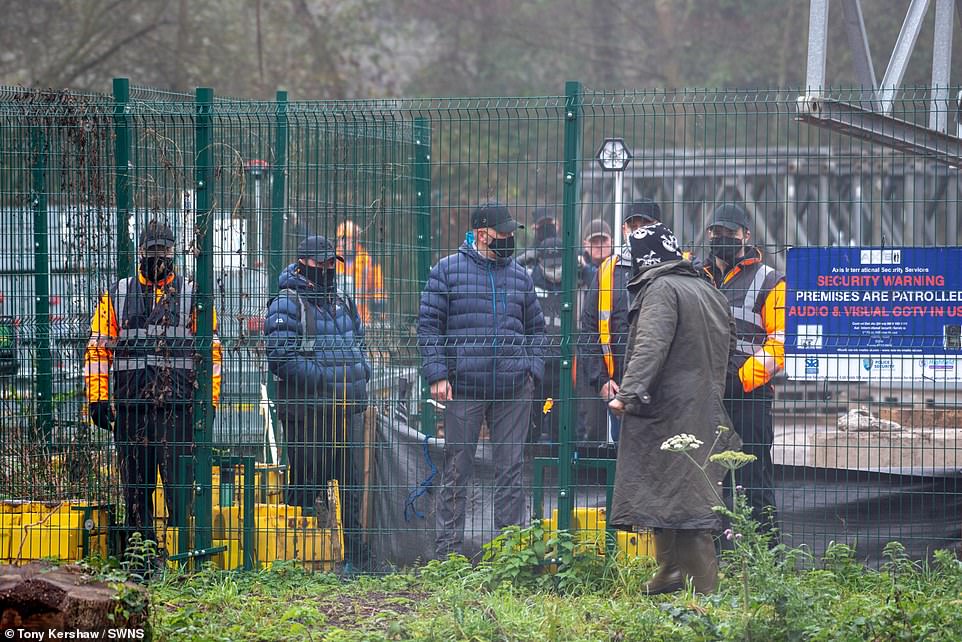 ‘This is a non-violent peaceful protest and we will continue to do this until the government takes its own advice by acting now to stop biodiversity loss which means stopping HS2.’

The HS2 Rebellion group claim that the ‘needless destruction’ of ‘irreplaceable habitat’ is ‘totally avoidable’, as it is happening over a mile away from where the High Speed rail line will be built.

An alternative plan for the relocation has been highlighted to HS2 which would avoid destroying the wet woodland, be cheaper for the taxpayer and better for the environment, they say.

Denham Country Park is a flood mitigation area, and the temporary access road will increase flood risk for downstream communities in Uxbridge and Staines.

Campaigners are urging local authorities to call HS2 to account, and are pleading with the government to ‘lead by example’, back the CEE Bill, and stop HS2.

The protest coincided with the arrival of the first two giant tunnelling machines to arrive in the UK. 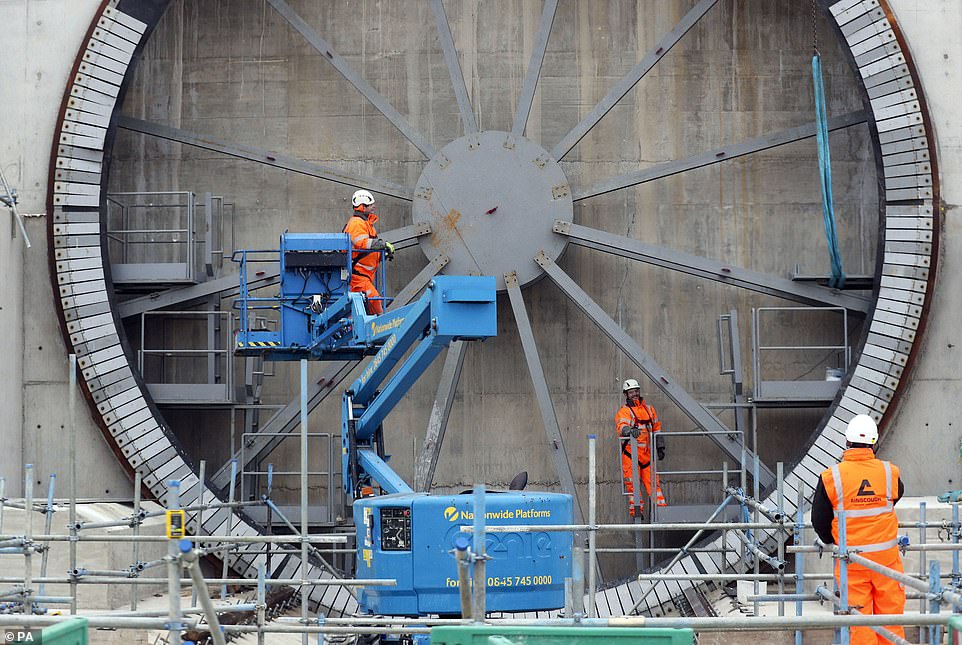 The protest coincided with the arrival of the first two giant tunnel boring machines, or TBMs, to arrive in the UK from Germany 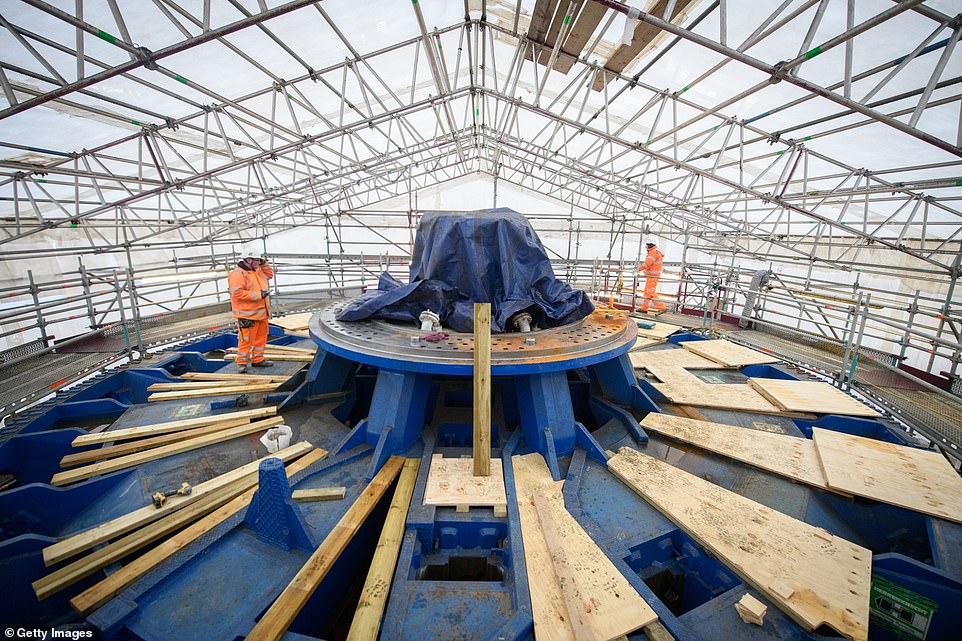 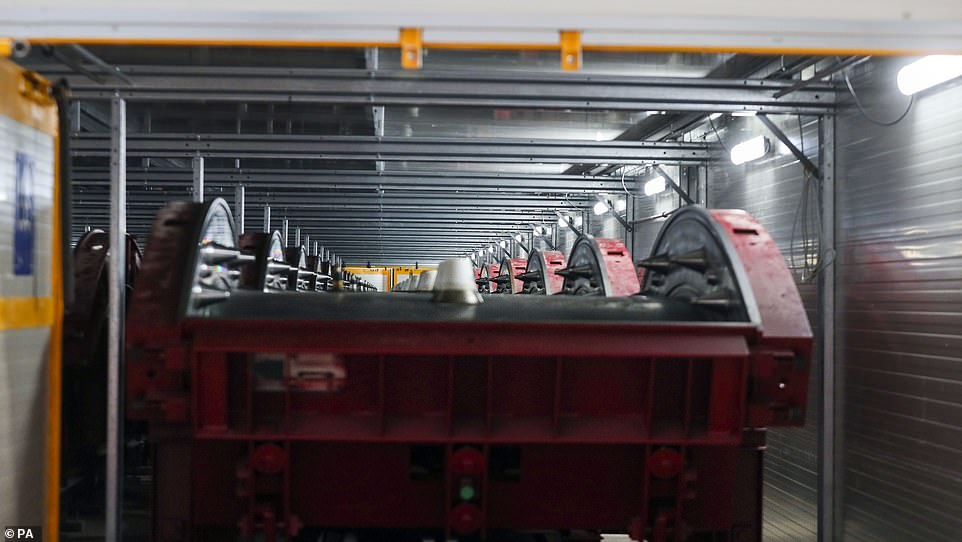 The 2,000-tonne TBMs were built by specialists Herrenknecht in Schwanau, south-west Germany, before shipping to the UK

Both 170-metre-long contraptions were transported from Germany to a construction site in Hertfordshire near the M25 in more than 1,000 parts.

They will be assembled over the coming months before they start digging the high-speed railway’s Chiltern tunnels in spring next year.

To dig the 10-mile long tunnels – the longest on HS2 – the tunnel boring machines (TBMs) will work non-stop for about three and a half years.

The two tunnels will go as deep as 80 metres below the ground to reduce the impact of the high-speed trains on communities and countryside on the route.

Their internal diameter will be 9.1 metres, providing enough space for emergency walkways on both sides of the track.

The material dug out will be converted into slurry by the TBMs, pumped back out of the tunnels and used for landscaping at the site.

The 2,000-tonne TBMs were built by specialist firm Herrenknecht in Schwanau, south-west Germany, before being taken apart and shipped to the UK.

They each cost tens of millions of pounds and were designed specifically for the mix of chalk and flints under the Chilterns.

The TBMs are named Florence and Cecilia following a public vote from a shortlist of suggestions by local schoolchildren.

Cecilia is named after Buckinghamshire-born astronomer Cecilia Payne-Gaposchkin while Florence is inspired by Florence Nightingale, the founder of modern nursing, who spent many years in the county.