New York: In explosive testimony to the impeachment inquiry into US President Donald Trump, the US ambassador to the European Union confirmed there was an explicit "quid pro quo" linking a White House visit to politically motivated investigations.

Gordon Sondland, a Trump appointee and donor, said the highest levels of the White House and State Department were involved in the push for Ukraine to announce investigations into the family of potential 2020 rival Joe Biden and debunked conspiracy theories about the 2016 election. 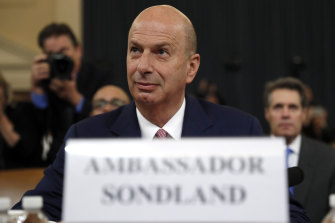 US Ambassador to the European Union Gordon Sondland says there was an explicit quid pro quo between a White House meeting and Ukrainian investigations. Credit:AP

"They knew what we were doing and why," Sondland told the House Intelligence Committee on Wednesday (Thursday AEDT). "Everyone was in the loop. It was no secret."

Sondland's testimony was highly anticipated because, unlike other witnesses who have appeared so far, he was in regular contact with the President during the period in question.

Last week he amended his previous testimony at a private deposition where he claimed there was no quid pro quo.

"I know that members of this Committee have frequently framed these complicated issues in the form of a simple question: Was there a 'quid pro quo?'" Sondland said in his opening statement on Wednesday.

"As I testified previously, with regard to the requested White House call and White House meeting, the answer is yes."

Sondland said he also came to believe that almost US$400 million ($587 million) in vital security aid would not be released to Ukraine until the investigations were announced.