Ex-Ukip leader Paul Nuttall became the latest to walk away from the party over the hiring of Tommy Robinson as an advisor today.

Mr Nuttall said he made the decision after ‘much soul searching’ but warned current leader Gerard Batten was dragging Ukip to the right in a way that would damage Brexit.

He quit as Ukip leader after the 2017 election after a poor performance and wrongly claiming he lost friends in the Hillsborough disaster.

Mr Robinson – whose real name is Stephen Yaxley-Lennon – founded the extremist English Defence League and is a convicted criminal.

Nigel Farage quit Ukip on Tuesday warning the party he has led repeatedly was unrecognisable under Mr Batten. 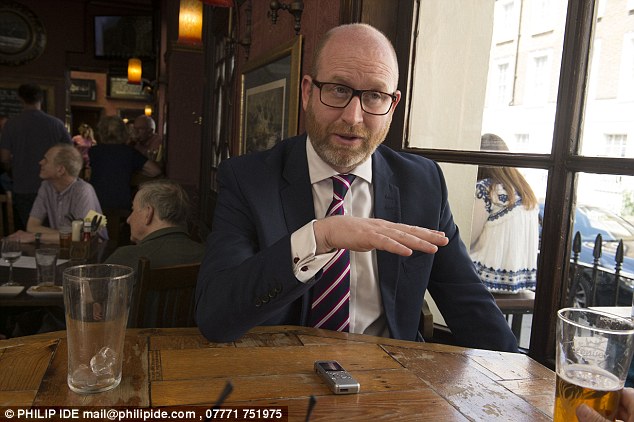 Gerard Batten appointed Mr Yaxley-Lennon as an adviser on rape gangs and prison reform. They are pictured in an undated photo

Mr Nuttall said: ‘I am resigning because the party is being taken in a direction which I believe is harmful to Brexit. The association with Tommy Robinson will simply appal many moderate Brexit voters and inevitably be detrimental to the cause.

‘The Tommy Robinson issue should have been shelved and debated within the party following Brexit; in line with the sensible decision taken by the National Executive Committee last month. The party leadership and my MEP colleagues have been aware of my views on this issue for some time.

‘Putting Tommy Robinson front and centre, whilst Brexit is in the process of being betrayed is, in my view, a catastrophic error. To conflate Brexit and Robinson at this crucial moment is to put the Eurosceptic cause in danger and I cannot and will not be party to that.

‘I will continue to serve the North West of England in the European Parliament until my term expires.’

After quitting on Tuesday, Mr Farage accused Mr Batten of ‘turning a blind eye to extremism’ and attempting to turn the party from an ‘electoral’ force into a ‘party of street activism’.

Mr Batten has described Islam as a ‘death cult’ and called for possible policies including Muslim-only prisons.

Ukip’s national executive committee (NEC) met at the weekend to consider his future as leader, but it voted against a motion of no confidence in Mr Batten.

Mr Batten has previously defended his decision to give English Defence League (EDL) co-founder Mr Robinson a role advising him on rape gangs and prison reform, describing him as ‘courageous’.

But Mr Farage said Ukip had been successful in the past because it had a policy of ‘excluding extremists’. The ex-leader has previously warned the appointment of Mr Robinson, whose real name is Stephen Yaxley-Lennon, would turn Ukip into the BNP. 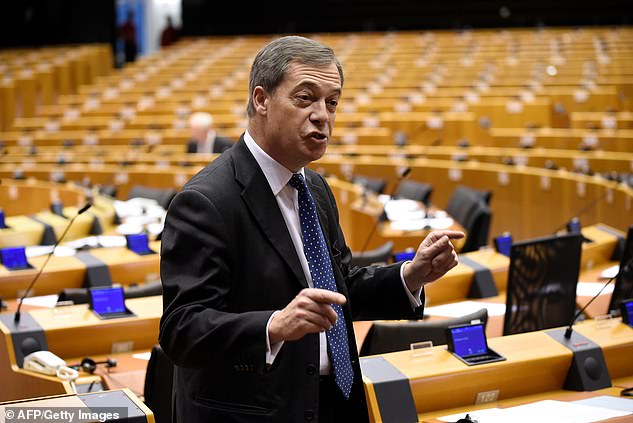 Nigel Farage (seen speaking at the European Parliament on November 29, 2018) has long opposed the appointment of Tommy Robinson, whose real name is Stephen Yaxley-Lennon

On Monday Suzanne Evans, the former deputy chairman of Ukip, quit the party in protest at the leadership of Mr Batten and his association with Mr Robinson.

She said she had become ‘increasingly alarmed in recent months by the perverse direction’ Mr Batten had taken the party in.

MEPs including Patrick O’Flynn, Bill Etheridge and William Dartmouth have also all quit the party in recent months over the direction of travel within the party.

Ukip said the upcoming demonstration on Sunday (Dec 9) – at which Mr Batten is due to speak – has not been organised by the party, but a spokesman added: ‘Members are free to attend should they wish.’

Mr Batten denied moving Ukip to the extremes or opening its doors to racists, and told the BBC that Mr Robinson would help him turn the party into a ‘mass movement… a party for ordinary people’.

But in a statement released on Sunday, Ukip said it ‘does not endorse the appointment of Tommy Robinson in any advisory role’. As founder of the far-right EDL, current rules prevent him from joining the party.

Born in Luton in 1982, the former aircraft engineer lost his job in 2003 after a drunken brawl with a police officer and drifted into becoming a central figure in British far-Right extremism.

As a petty criminal he was in and out of prison for football violence and mortgage fraud, but claimed he was turning his back on criminality and violence in 2013 after being jailed for travelling on someone else’s passport to visit EDL fans in America. 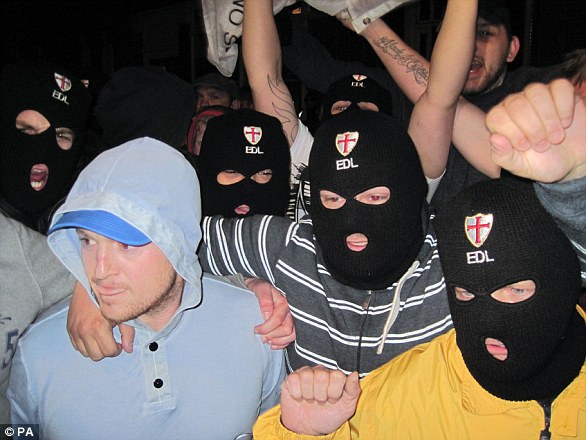 Mr Farage has said the appointment of Robinson to Ukip signals the party has become a ‘party of street activism’. Mr Yaxley-Lennon is pictured at an EDL rally in London on May 22, 2013

He dramatically quit his anti-Islam mob group, claiming he would be a peaceful activist with the help of counter-radicalisation group the Quilliam Foundation but instead stepped up his poisonous rhetoric against Muslims.

He hit global fame after being locked up for contempt of court earlier this year – sparking an international ‘Free Tommy’ campaign backed by former Donald Trump strategist Steve Bannon, with a White House envoy lobbying the UK to release him.

Bannon branded Robinson ‘a solid guy’ and the ‘backbone’ of Britain and campaigned for him to be released from jail – sparking a rift with his ally Nigel Farage.

Robinson had been arrested outside Leeds Crown Court and jailed for 13 months after filming defendants on trial for rape while already on serving a suspended sentence for a similar offence.

He was later released on appeal, despite warnings he had risked collapsing the trial into evil Huddersfield grooming gangs.

But Robinson, 35, defended his actions, saying: ‘If I believe I’m morally right then I’m not bothered about what your law says.’

Farage told The Mail on Sunday: ‘I think if you had to find a working-class hero, this is not it. This is not it. Repeat prison sentences, etc.’