Ex-Team GB boxer Louis Adolphe, 28, is spared jail after SPITTING at a bus driver in road rage fury – but is ordered to attend anger management course

An Olympic boxer who spat at a bus driver in a road rage incident has been spared jail and ordered to attend an anger management course instead.

The driver flashed his lights at Adolphe, who was blocking his route after he changed his mind about turning right, Wimbledon Magistrates’ Court heard on Thursday.

The 2012 ABA light-welterweight champion was traced by a DNA swab of spit taken by the driver when he returned to the bus depot.

Adolphe’s solicitor earlier said his client was going through a ‘mad phase’ at the time, due to paranoia from being stabbed last year. 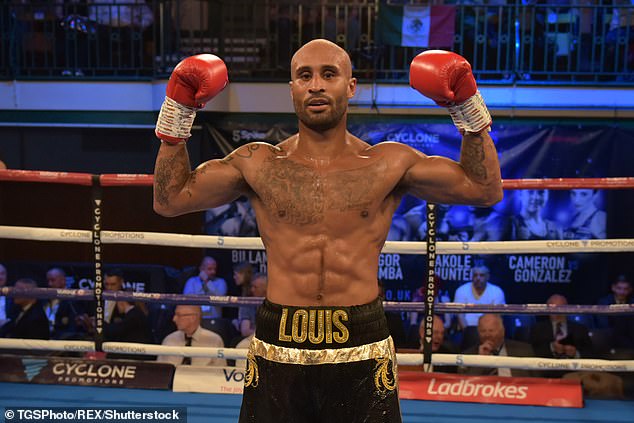 Former Team GB boxer Louis Adolphe has been ordered to take an anger management course after spitting as a bus driver. Pictured: Adolphe after winning a fight in London on October 2018

Adolphe accepted he had ‘underlying issues’ to deal with and complained publicity about the incident made him too embarrassed to return to work with children.

Mr Rana had been driving a 131 bus along Worple Road in Wimbledon at around 8.40am on January 22 this year.

Norleen Ibe, prosecuting, said: ‘When the victim reached the traffic light the defendant pulled into the other side of the road, in oncoming traffic.

‘He was shouting but the driver could not hear because the window was closed, he asked him to open the window.

‘He asked: ‘Why did you flash your lights at me?’ ‘Because you’re blocking me that’s why’.

‘He said he made a mistake, he didn’t want to turn right, the victim then asked ‘Why did you break harshly?’

‘At this point he spat and shouted ‘you f-king bastard,’ he was leaning across to the passenger side window.

‘Spit landed on his face and work jumper, he’s then driven off, contacted his controller and returned to the bus garage, a swab of spit was taken off his face.’

‘I feel this is disgusting, this has made me upset, feel like a bit of rubbish.

‘As I was driving after it made me feel like crying, I did not ask to be treated this way.’ 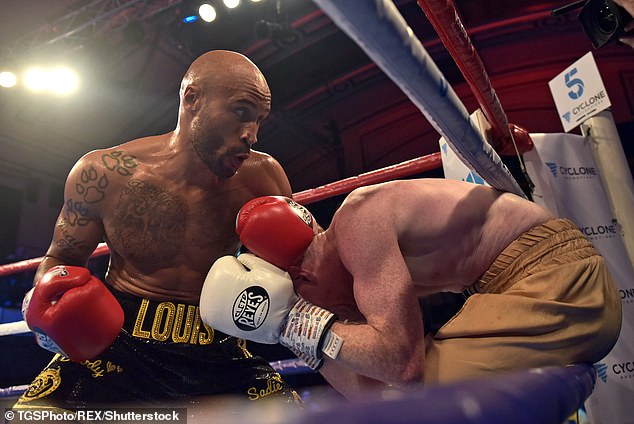 Pictured: Adolphe hitting opponent William Warburton during a Boxing Show in October 2018. The prizefighter said his road rage incident may have been sparked by ‘issues’ he was dealing with after being stabbed last year

Representing himself, Adolphe told magistrates: ‘The last time I was in court everything I said ended up in The Sun newspaper because I was a professional fighter, this has affected me.

‘I’m a professional fighter, I had a very outstanding career, unfortunately I was stabbed.

‘After that I then moved my career to work with children.

‘This going into the paper affected my work, would you want your own children to be around someone with these characteristics?

‘They spoke about my personal issues and personal life.

‘I’m suffering now, this is enough punishment, I can’t work with children now.

‘I’m too embarrassed to go into my working space. 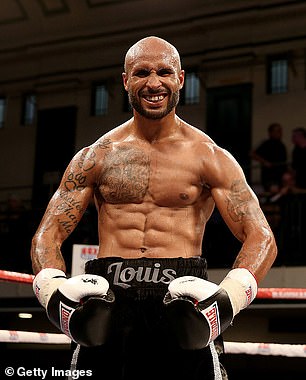 Adolphe was sentenced to an 18 month community order and ordered to pay a total of £275 including £100 in victim compensation. Pictured: Adolphe celebrating his victory in a July 2014 fight in London

‘I’m happy to take any punishment you give me, because I done wrong.

‘Maybe I do have underlying issues to deal with and I could do some sort of course.

‘I never want to be back in here again.

‘There was a lot of trauma, a lot of pain in the last year.

‘I was in work but with the Covid thing things have slowed down.’

Magistrate Margaret Pretty said: ‘Well Mr Adolphe, this was a road rage incident when you forced a bus to stop, you abused the driver and spat at him through an open window, causing distress.

‘If you wish to avoid court again you need to address your anger and temper, we have decided a community order is the best way to do this.

‘The probation service will decide how those 20 days are spent, we’re hoping that will include an anger management course so you can deal with those situations better, and also a thinking skills [course].

‘See this as an opportunity.’

The fighter replied: ‘Thank you very much’.

Adolphe, of Poleston Gardens, Wimbledon, admitted assault by beating and was sentenced to an 18 month community order with 80 hours unpaid work, 20 days of rehabilitation activity requirement including anger management and thinking skills courses.