Father, 28, is jailed for four months after shining £7 laser pen he bought off eBay at police helicopter to ‘test what his new toy could do’

A reckless father who endangered the life of a pilot when he shone a laser pen at a police helicopter to ‘test what his new toy could do’ has been jailed for four months.

Alexandru Gheorghe, 28, from Redditch, Worcestershire, dazzled the occupants of a police air service helicopter with a £7 laser pen he had bought off eBay as it was flying over Stratford on its way back to its base.

The pilot had to take evasive action to manoeuvre away from the beam after the cockpit was bathed in bright green light at 10.30pm on May 16, a court heard.

Gheorghe was arrested at the scene of his workplace at Maxi Haulage Limited in Stratford-upon-Avon, Warickshire, after the pilot directed officers on the ground. 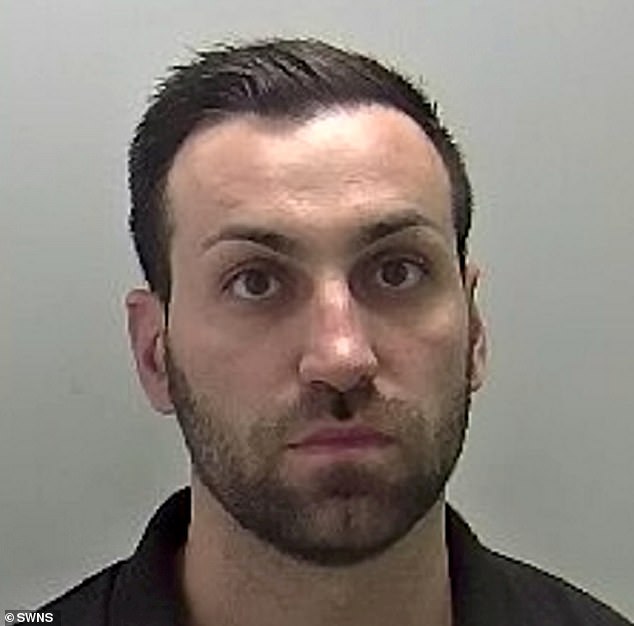 Alexandru Gheorghe, 28, from Redditch, Worcestershire, shone a £7 laser pen at a police air service helicopter as it was flying over Stratford back to its base on May 16

He admitted he had been playing with his new gadget and shone it at the helicopter to ‘see what it could do’ in a moment of ‘sheer, reckless, crass stupidity’.

Gheorghe pleaded guilty to shining a laser at an aircraft and was jailed for four months at Warwick Crown Court on Wednesday.

Sentencing, Judge Sylvia de Bertodano said: ‘At 10.30 at night you were at your workplace, and you were playing, for want of a better word, with the laser you had bought online.

‘What you were doing was shining it up at a police helicopter. I don’t suggest for a minute you had any idea of the consequences you were causing.

‘But the statements of those who were in the helicopter made it clear there were very serious consequences indeed.

‘The pilot describes having to manoeuvre away because he was in danger of being dazzled, as others in the cockpit with him were dazzled, and as he manoeuvred away he describes the beam continuing to follow the helicopter.

‘This was not momentary, because what the pilot said was that even though the aircraft was moving position, the laser continued to follow it. 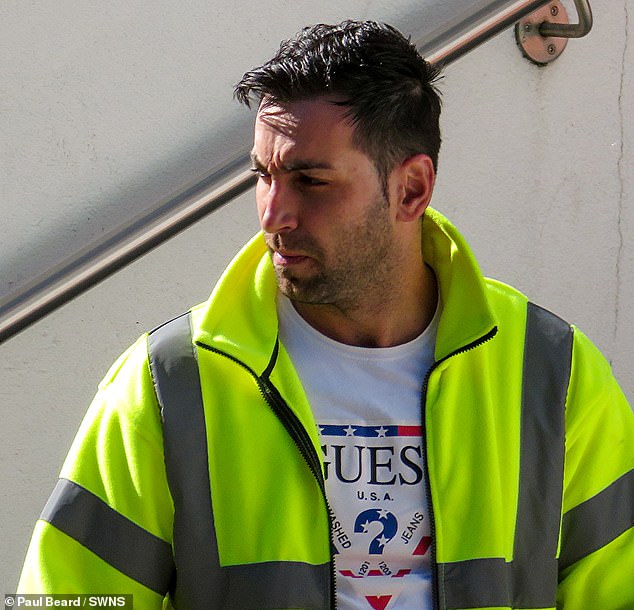 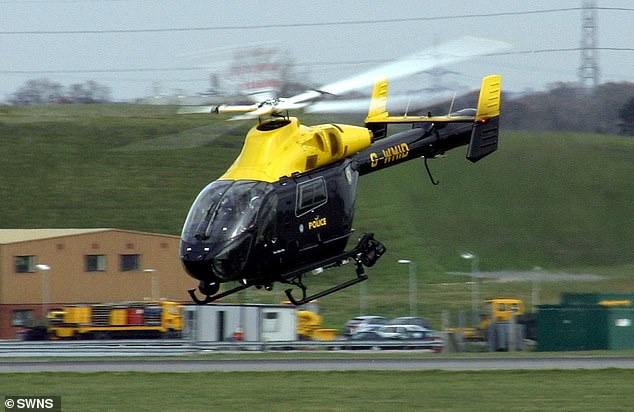 In 2017, the Laser Misuse (Vehicles) Bill, stated those caught shining a laser at a pilot could face up to five years in jail. (Stock image)

‘When you shine a light at an aircraft of any kind in that way it endangers the lives of those in the helicopter, and potentially other people on the ground if it had had an accident.

‘I accept you are very sorry for what happened, I don’t suggest you pose a risk to the public, no rehabilitation is required, and you have strong personal mitigation.

‘But against all that I have to weigh the very serious nature of this offence and its possible consequences.

What are the current laws on laser pens?

Owning a laser pen is not illegal but a person caught using it to dazzle others in the eyes is committing an offence.

In 2017, the Government toughened penalties on those caught targetting transport operators or drivers with a laser device.

The Laser Misuse (Vehicles) Bill expanded the list of vehicles beyond just planes and meant those caught shining a laser at a transport operator could face up to five years in jail.

Drivers of trains and buses, captains of boats and even pilots of hovercrafts are among those protected by the law.

Offenders may also be liable to a Community Protection Notice for anti social behaviour.

The Health Protection Agency suggests that laser pens that are more powerful than Class 2 should not be sold to the public.

In 2017, the Government called for evidence into the regulation of laser pointers after a survey of UK ophthalmologists reported more than 150 incidents of eye injuries involving laser pointers since 2013.

The Civil Aviation Authority has also reported a rise in lasers being pointed at helicopters and planes on take-off and landing.

‘These items are readily available, and the effects if they are used in this way are potentially catastrophic.

‘I have an obligation to send out a very strong message that if you purchase an item of this sort and use it in this reckless way, you must go to prison.’

Prosecutor Marcus Harry said the police air service helicopter was flying over Stratford with the pilot and two officers on board when the incident took place.

He said: ‘The pilot saw a green light sparkle, which he recognised as a laser beam, and he manoeuvred in an evasive action.

‘He opted to obtain goggles in order to minimise the effect of any such light, and asked one of the police officers to retrieve them for him.’

As the officer was attempting to get the goggles, he was dazzled by the beam and had to close his eyes momentarily.

Fortunately by then the pilot had successfully manoeuvred the helicopter so the cockpit was pointing away from the light.

The pilot was requested to assist by remaining in the area so the officers in the helicopter could locate the light source using an infra-red camera.

As a result, they were able to direct officers on the ground to the Maxi Haulage site where Gheorghe was working at the time.

The pilot, who had more than 30 years’ experience, said he had been attacked many times by laser beams.

He described how they diffuse on contact with the plastic screen, ‘bathing the cockpit in bright light,’ which was particularly dangerous at night.

Nick Devine, defending, said: ‘As far as the offence is concerned, I can’t really mitigate the offence beyond saying it was a few moments of sheer, reckless, crass stupidity.’

He said Gheorghe was ‘not a man given to any kind of poor behaviour’ and was normally a responsible hard-working man with a young family.

He added: ‘Then on this evening, for reasons even he can’t explain, he did something he would never normally have done.

‘He bought it planning to put some sparkly things on it and make it into some sort of toy.

‘He decided to see what it did. He had absolutely no idea of the effectiveness of it, or the potential consequences.

‘He was not shining it with any malicious intent.’