‘Hatton and Mayweather are at it again!’ Flailing fighters fail to land punches as they bob, weave and end up rolling around on the ground in bizarre street scrap

A rotund man has been sarcastically compared with professional boxers after bizarre footage showed him squaring up to another man in the street and scrapping.

The clip shows the unidentified man throw a sucker punch which misses and then go through a routine of ‘boxing’ moves.

But instead of a heavyweight fist fight, the two men ending up rolling around on the road in the Bon y Maen area of Swansea. 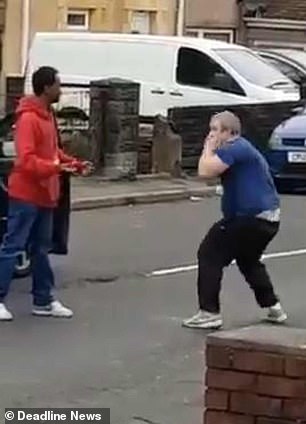 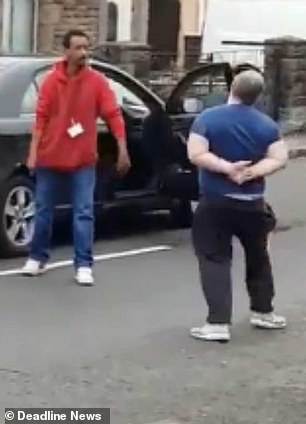 The man in a blue t-shirt puts his hands up as if he is boxing (left) before putting them behind his back (right) in the street scrap in the the Bon y Maen area of Swansea, Wales

The clip begins with a man in a red jumper appearing to push away the other man, who is wearing a blue t-shirt and swinging his arms.

Suddenly, the man in the blue t-shirt takes a swing at his rival, but completely misses him and briefly stumbles out of shot.

He then squares up to his opponent swinging from side to side in a fashion similar to that of Muhammad Ali.

Loud laughing can be heard throughout the video as the man in the t-shirt then runs at the man in red before putting both his arms behind his back.

He then appears to place one of his hands on his cheek, as if he is asking for a punch.

The man in the jumper then put his fists up and manages to throw his heavier opponent to the ground and kicks at his face. 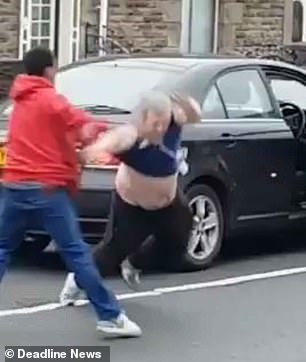 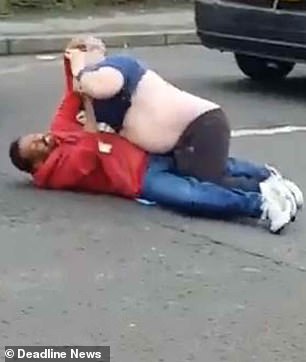 He also appears to give him a couple of kicks as those in the background can be heard saying: ‘Go on f*** kick him.’

Suddenly, the man in the t-shirt fights back by grabbing the other man’s legs and he consequently comes crashing to the ground.

Bizarrely, a horse can then be heard neighing out of camera shot.

The man in the t-shirt then climbs on top of the other fighter with his stomach clearly on show and the pair try to grab at each others faces before someone shouts to ‘break it up.’

The clip was posted yesterday, has been watched more than 700,000 views. It was taken by James Davies and posted with the caption: ‘Meanwhile in Bon y Maen.’

Online, Jamie Daw responded: ‘See Hatton and Mayweather are at it again.’

Another user took a screenshot of the moment the man places both hands before his back and said: ‘*Watches one Conor fight.’

Mark Thompson said: ‘He been watching Mike Tyson do the old bob and weave!’

There were also a couple of comments on the bizarre situation of a horse arriving on the scene.

One Twitter user said: ‘Incredible footage taken by a horse!’ and another said: ‘So where did the horse neehhhh come from lol.’