There’s something both sinister and comical about being tailed by a mysterious black sedan in a country that essentially has only one road.

My 60 Minutes team, including reporter Liam Bartlett, had just arrived in Kiribati to report on a number of Pacific countries that had recently switched diplomatic recognition from Taiwan to the People’s Republic of China. 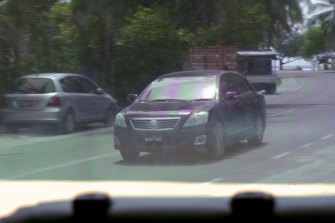 Kiribati, we were to discover, is no island paradise. Rather, it’s a secretive state which represses the media, as well as being central to China's aim of establishing a secure sea lane through the South Pacific, which it benignly calls a "blue economic passage".

Which might explain why on this tropical morning in Kiribati we were being tailed by a government car – registration GOV158C. The events that followed would make front pages in Australia and internationally. Many in the Australian media criticised 60 Minutes for entering Kiribati without a filming permit, but the real story is rather darker.

Ahead of our visit to Kiribati, we’d twice emailed Tearinibeia Enoo-Teabo, the communications officer for President Taneti Maamau, and on the eve of our departure for Kiribati, he finally replied. He said a "filming permit" was required to work in the country, but in the course of a half-hour phone call said we could apply for it on arrival if we paid the required $3000 fee in cash. Then I sat down to read the paperwork Mr Enoo-Teabo had sent.

To describe the "Kiribati Filming and Research Agreement Form" as draconian is an understatement. Thirteen densely written pages that could have been taken out of George Orwell’s 1984. My only encounters with anything similar have been press permits for Soviet-era communist countries and various dictatorships.

The permit’s killer clause is the right of the Kiribati government to censor all recordings and reportage “to retract the contents that contradict and are not aligned with the current Government’s policies and priorities”. The punishment for reporting without fear or favour in Kiribati? The government will “confiscate all recording materials”.

This condition alone cuts through every internationally recognised standard for fair and free reporting. Hoping this censorship clause was only a paper threat, we decided to fly out as planned.

Our first morning in Kiribati was to have begun at the President’s Office negotiating our filming permit. But – and you cannot make this stuff up – another member of our team, former US Navy Intelligence Officer Captain Jim Fanell, was bitten by a dog on an early morning walk. The occupants of GOV158C were likely mystified as they followed us on a mercy-dash to the hospital. 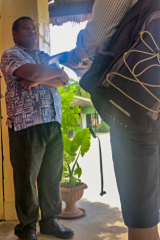 When we returned to our hotel, immigration officials were waiting and ordered us to accompany them to the President’s Office.

There transpired a most curious meeting, primarily about the cost of the filming permit, which had risen mysteriously in two days to $5000. I asked if they’d accept a Visa card for the difference. There was a vague consideration of that by the president’s man, Mr Enoo-Teabo, who then just as vaguely agreed to try to fast-track our application that day.

We were returned to our hotel where Immigration Department chief Uering Iteraera set up a guard at the entrance. Letters were handed to us saying if we tried to leave we would be “transferred to another designated accommodation".  When I asked Mr Iteraera to clarify, he replied: "A cell".

As the afternoon unfolded, our plight became international news. None of our critics had seemingly read the Kiribati Filming and Research Agreement Form and its censorious conditions – which their own media organisations would no doubt reject out of hand.

But under house arrest in Kiribati, we were finding allies to our cause, including no lesser figure than Sir Ieremia Tabai, Kiribati’s founding father and first president. A revered figure in Kiribati, he’d heard of our predicament and came to visit us, over-awing our guards and the ever-present Mr Iteraera. 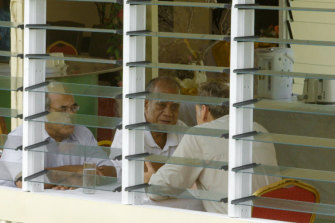 Sir Ieremia was accompanied by Kiribati’s current Opposition Leader Titabu Tibane. They told us they were deeply upset by our treatment and the stain they perceived it put on Kiribati’s reputation. They asked to be interviewed, to, in Sir Ieremia’s words, “take our message to the world.”

Said Mr Tibane: “This is the action of a communist country changing us around. This is a sad day for democracy.”

The President’s office released a statement after our departure, claiming we’d been thrown out for lack of a filming permit, saying “Normally, we encourage and strongly recommend international media to visit Kiribati and to cover events and issues going on in our small nation.”

That is a straight-out untruth.