A former police officer in Florida has been sentenced to 25 years in prison after being convicted in the shooting death of a driver whose car had broken down.

Circuit Judge Joseph Marx issued the sentence Thursday to Nouman Raja,41, a former officer in Palm Beach Gardens who was found guilty of killing of 31-year-old Corey Jones on Oct. 18, 2015.

"This has been a heartbreaking case," Marx said. "I think it has had a profound effect on every single person who sat through this trial." 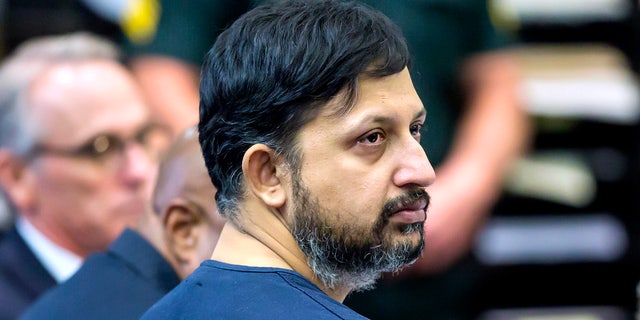 Prosecutors said Jones, who was a member of a reggae band, was heading home from a performance at a nightclub when he pulled off to the side of the road after his car broke down.

Raja, who was dressed in plainclothes and driving an unmarked white van as a part of an auto burglary investigation team, approached Jones but never properly identified himself as a police officer, prosecutors said.

Jones had a concealed-weapons permit and was carrying a handgun.

At the time of the encounter, Jones had been on his phone, talking to a tow-truck dispatcher and the call was recorded. But police were not initially aware of the recording.

"You good?" the police officer is heard asking Jones.

Suddenly, Raja shouts at Jones to raise his hands, using an expletive. Jones replies, "Hold on!" and Raja repeats his demand.

Prosecutors believe Jones pulled his gun and tried to run away, Raja fired three shots and Jones ran down an embankment.

Jones then threw his gun, but Raja fired three more times, 10 seconds after the first volley. One of the bullets pierces Jones' heart while other shots hit him in both arms, according to prosecutors.

Raja was charged with manslaughter and attempted murder. His sentencing marks the first time in 30 years that a Florida law enforcement agent has been convicted and sentenced for an on-duty killing.