‘Binary sex matters!’ Former Olympic swimmer Sharron Davies sparks another transgender row after tweeting about the need for males and females for procreation

Sharron Davies has sparked another gender-based row that has led followers to accuse her of transphobia.

The former Olympic swimmer posted about an end-of-the-world type scenario to explain why she thinks ‘binary sexes matter’.

Ms Davies claimed that the only way for humanity to survive on a deserted island, if reduced to two humans, would be for a man and a woman to procreate. 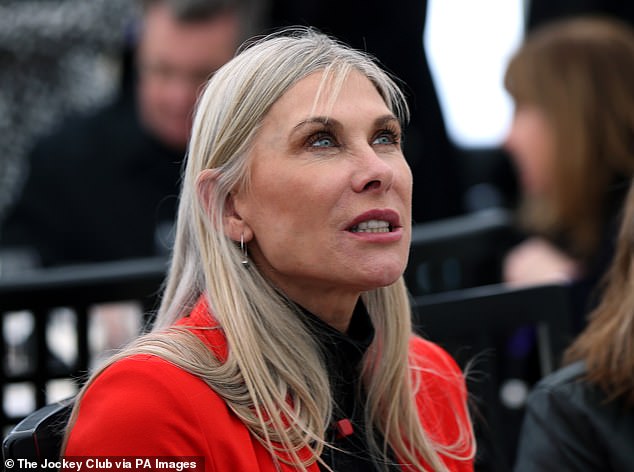 ‘But if u put a male & a female there we might stand a chance! Providing they can fish of course. Binary Sex matters.’

The fresh row comes months after she argued the female athletes needed to be protected from transgender competitors ‘with a male sex advantage’. 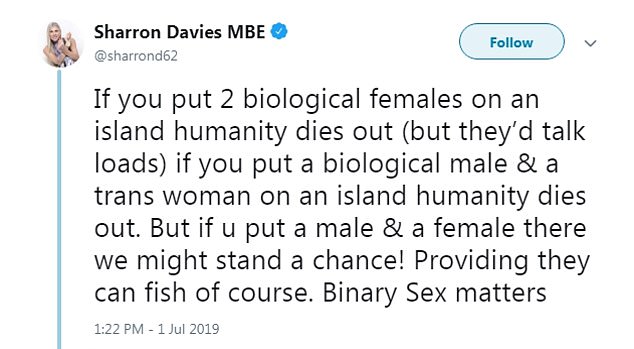 While some agreed with Davies’ analogy, others were quick to take it apart, claiming she had manufactured a scenario to prove her point.

Pandora Sylvana replied: ‘And? I don’t know if you’ve notice but we’re not exactly running short of homosapiens on this planet. This is also one of the standard arguments made by homophobes.’

Another commentor hit back at Davies by saying her argument meant post-menopausal woman would not count as a female in the scenario.

‘Sharron, you’ve 56. You’re not going to be having kids on a desert island either. And yet you’re still a woman. Gosh, it’s almost as if identity isn’t defined by fertility or something.’

Steve Foster defended Davies, saying he ‘couldn’t believe you are having to teach basic biology to so many.

‘Its also amazing the fact that they don’t accept it. On behalf of humanity I salute your time, patience and resilience.’

As some accused her of being a TERF (trans-exclusionary radical feminist), Davies tried to explain that the idea of two people stuck on an island was just an analogy for her point.

‘Didn’t think we were going to deliberately maroon chosen specimens at the end of the world after armegeden as an experiment?’.

The two-time Commonwealth Games gold medallist is one a number of high profile names to give their opinion on the divisive issue.

She said that male athletes ‘self identifying’ as female to compete is unfair and even went as far as to say it is ‘cheating’.

The tennis legend, who is gay, is a long-term campaigner for LGBT rights but claimed that male athletes ‘self identifying’ as female to compete is unfair. 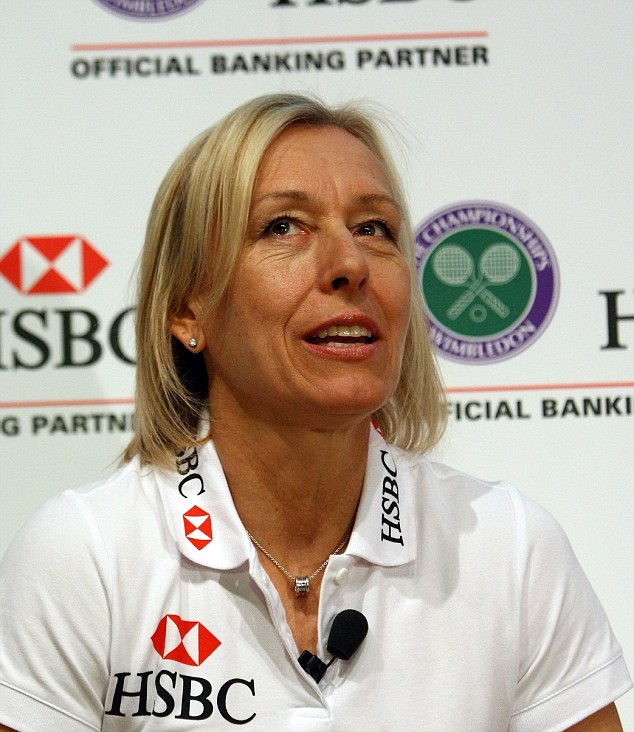 Former Wimbledon champion Martina Navratilova had to apologise for calling transgender competitors in female competitions ‘cheats’. She posted a lengthy blog post on her website

She was called out by Canadian academic and cycling champion Dr Rachel McKinnon, who is the first transgender woman to win a female world cycling title.

McKinnon, 35, still has her male anatomy, but has lived as a woman since she was 29.

She accused Navratilova of transphobia and demanded an apology.

Following an article on the subject that Navratilova wrote for The Times Athlete Ally, an LGBTQ athlete advocacy group, removed her from their advisory board, stating her comments ‘are transphobic [and] based on a false understanding of science and data.’