Paris: France has had 10,561 new confirmed COVID-19 cases in the past 24 hours, health authorities said on Saturday, a new daily record as the number topped 10,000 for the first time.

The latest daily count, surpassing the previous record of 9843 new infections reported on Thursday, highlights a resurgence of the disease in France. 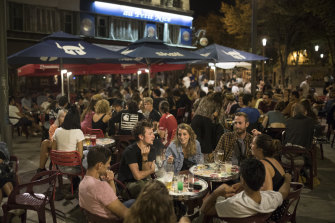 Friends have a drink together at a bar in Marseille, southern France, on Saturday, September 12, as new daily cases of COVID-19 passed 10,000 for the first time. Credit:AP

The rise led the government to outline additional measures on Friday to avert a return to the general lockdown put in place earlier in the year. Prime Minister Jean Castex promised steps to speed up tests and toughen local measures in high-infection zones. On Friday he said his government was not planning a nationwide lockdown.

The Prime Minister himself came out of isolation on Saturday after testing negative for COVID-19, a week after being in contact with someone who had a positive result, his office said. Castex had already tested negative for COVID-19 since sharing a car last weekend with the director of the Tour de France cycle race, who later tested positive. 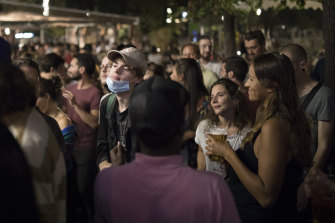 People gather at a bar in Marseille, southern France on September 12 as French Prime Minister Jean Castex warned that the virus situation is “obviously worsening” in the country.Credit:AP

In its daily update, the French health ministry also reported that 772 clusters were being investigated, an increase of 86 in the past 24 hours.

Over the past week, there had been 2432 arrivals in hospital for COVID-19, including 417 entries into intensive care units, the ministry said.

The death toll since the start of the COVID-19 outbreak this year in French hospitals and nursing homes has reached 30,910, with 17 deaths recorded in the past 24 hours, it added.