This is the dramatic moment huge rocks suddenly collapsing from a mountain and smashing into a highway road with busy traffic in China.

Heart-stopping footage shows the enormous stones tumbling down the slope before smashing into a stream of cars in south-western Chinese province Sichuan.

Three people suffered minor injuries from the incident triggered by recent heavy downpours in the region, the officials said. 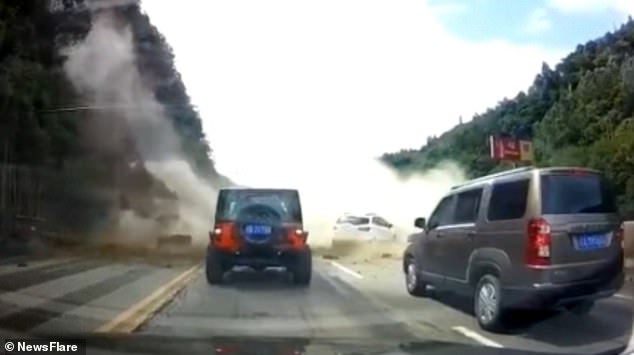 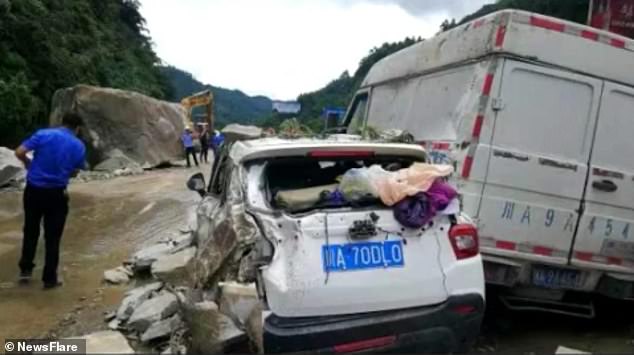 The terrifying accident occurred around 10:55am on Saturday on a highway road in the city of Yinbin, according to a notice released by the local traffic authorities from Sichuan province

The terrifying accident occurred around 10:55am on Saturday on a highway road in the city of Yinbin, according to a notice released by the local traffic authorities.

Dashcam footage shows multiple giant rocks rolling down the hill and smashing into the cars moving along the highway.

Three people were injured and three cars were said to have been hit by the stones.

Other clips shows a man, appearing to be injured, covering his head with a cloth while two wrecked vehicles can be seen parking on the side of the road.

Yibin traffic authorities said that the rocks collapsed from the mountain due to recent heavy rain in the area.

Officials have sealed off the road and launched an emergency response to repair the traffic link, according to the official statement.

The news comes as another shocking video sees a giant sinkhole suddenly opening up on a street, swallowing two pedestrians in south-western China.

Dramatic footage shows the two female residents walking on the footpath next to a main road before tumbling into the deep pit as the pavement ripped in half in Chongqing on July 27.

Both women survived the accident with minor injuries after being rescued by firefighters, according to reports.

Regions across China have been hit by floods and heavy rain since June.

More than 45million people have been affected since flood season began in June, with at least 142 people dead or missing, according to official figures.