Washington: Swedish teenager Greta Thunberg, who shot to global fame for inspiring worldwide student strikes to promote action against climate change, took her mission to US President Donald Trump’s doorstep on Friday with a protest outside the White House.

Thunberg, wearing a blue hooded sweatshirt with her hair loosely pulled back in a ponytail, was greeted with a hero's welcome by hundreds of mostly young people carrying signs reading "If you did your job, we would be in school" and chanting "This is a crisis, act like it!" and "Business as usual is not enough." 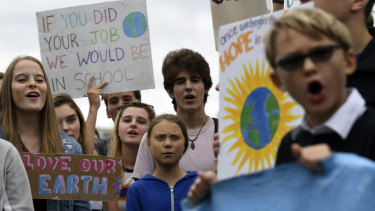 Greta Thunberg, centre in blue, joins other young climate activists Friday for a climate strike outside the White House in Washington on Friday.Credit:AP

"This is very overwhelming," she said softly into a megaphone after a march in front of the White House in which she walked amidst the other activists instead of in front. Sometimes it was hard to hear her over the cheers.

"See you next week," she said toward the end of the event, referring to a planned September 20 global "Climate Strike" in which youth and adults are encouraged to walk out of school or work to urge more action on climate change.

The demonstration marked the first high-profile event of Thunberg's six-day visit to Washington, intended to pressure the Trump administration and Congress ahead of a United Nations climate summit, where world leaders will be asked to ramp up their carbon emissions cutting to fend off global warming. 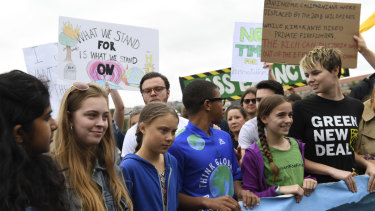 Trump is among a small minority of global leaders who has openly questioned the science of climate change. He has announced his intention to withdraw the United States from the Paris Climate Agreement – a global pact to stem the rise in global temperatures – and has a policy of maximising American production of fossil fuels.

Thunberg has said she does not believe she can convince Trump or other climate change doubters that global warming is real, but hopes they will take briefings from “actual scientists and experts in this area.”

The 16-year-old activist gained attention last year, when she started skipping school every Friday to demonstrate outside Sweden's Parliament. After arriving in the United States in August by sailboat to reduce her carbon footprint, she is bound for New York later this month, where she will take part in the UN climate summit.

While in Washington, Thunberg will address Congress on climate change and later join Democratic politicians and plaintiffs in the Juliana v the United States case – in which a group of young people sued the government for failing to address climate change – at the Supreme Court.

Thunberg was nominated for a Nobel Peace Prize earlier this year after the number of students taking part in her strikes – dubbed “Fridays for Future” – broke 2 million across 135 countries including Australia. She was named one of the world’s most influential people by Time magazine in May.

Jennifer Morash, a doctoral candidate in plant science, brought her daughter Adeline, 9, to the rally to see Thunberg after getting permission from her school in Maryland.

"I just want to make sure we all have a happy future and for people to take climate change seriously," Adeline said.