Guatemala’s constitutional court has upheld a request from indigenous campaigners to suspend operations at one of the largest nickel mines in Central America, in a battle over the facility’s environmental impact.

The court found in favour of an appeal brought by campaigners who claim the ministry of energy and mines failed to carry out a full consultation with local people when it decided, in 2016, to extend the licence for the Fenix mine.

Fenix, which is owned by a company headquartered in Switzerland and with large operations in Russia and Ukraine, had lain dormant for decades before being reopened in 2014.

The shock court ruling comes one month after the Guardian joined a group of 35 media organisations in 30 countries to investigate Fenix as part of the Green Blood project, a series about the dangers faced by journalists reporting on the environment.

It is understood that the court will shortly issue a written order demanding an immediate halt to further activity at the opencast mine and refinery.

Fenix is near the town of El Estor, on the shores of Lake Izabal, Guatemala’s largest expanse of fresh water. The lake is an important breeding ground for wildlife including crocodiles and manatees, a freshwater mammal suffering population declines across the region. The lake’s fish are a source of food and income for local people.

In the hills above Izabal, there are about 20 Mayan villages, some of which do not appear on official maps, within the 250,000 sq km area covered by the Fenix licence. Those nearest the mine have complained of water shortages and crop failures. 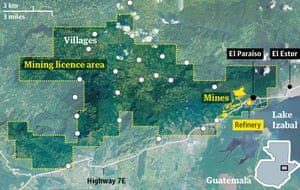 The mine’s owner, Solway Group, says it carries out impact studies before digging, that it obeys all applicable environmental laws, and that there is no scientific evidence of harm to the local environment.

Responding to the ruling, the Swiss group said: “Solway’s operational activities are always performed in accordance with the law. We will certainly follow the constitutional court’s decision. However, as an employer responsible for the lives of over 2,000 staff members and their families, we will take all possible measures not to halt our operations to the extent that this is possible within the legal framework.”

An appeal against a decision by the Guatemalan ministry of energy and mines to extend the Fenix licence, in 2016, was brought by members of the fishermen’s union, who began protesting against the mine in 2017. The appeal was upheld in February this year.

In a statement on Friday, the constitutional court said it had decided to uphold a further demand from campaigners to temporarily halt operations until the conclusion of the legal battle over consultation.

Solway, based in the Swiss town of Zug, is appealing against the ruling that it should consult the community. A hearing on the issue is scheduled for 25 July.

In the interim, the court said its intention was to “grant provisional relief in favour of the applicants; temporarily suspending, pending the processing of the appeal, the licence of the mining exploitation right called Fenix”.

Judges cited Guatemala’s commitment to the 1989 Central American Commission on Environment and Development, which committed the country to the “rational” use of natural resources, pollution control and restoration of ecological balance.

The disputes between Solway and local communities began in May 2017 after the waters of Lake Izabal turned red for a period of weeks. Government studies blamed an algae bloom caused by sewage, and denied any link to the mine. But campaigners remained concerned and continued to take direct action, erecting blockades near the gates of the mine and barricading the families of workers inside a residential compound.