Harvey Weinstein once claimed he was the victim of child sexual abuse as allegations about his own abusive behavior toward women mounted in 2017.

The movie mogul, who has since been convicted of rape and sentenced to 23 years, made the claim during a text conversation with AJ Benza – a gossip columnist who was once on the payroll of Weinstein’s studio.

The conversation was unveiled in court documents collected by New York prosecutors that were unsealed after Weinstein was sentenced this week. 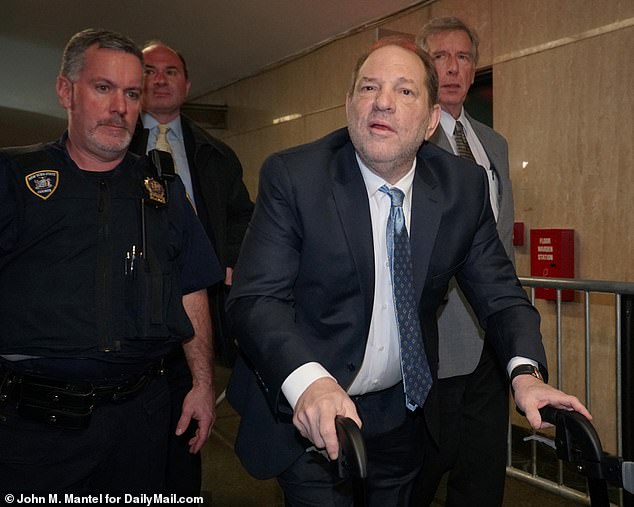 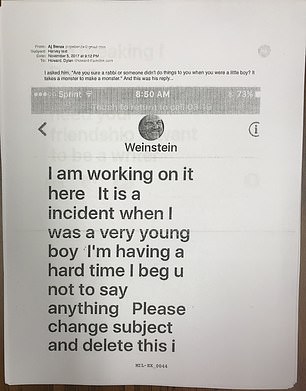 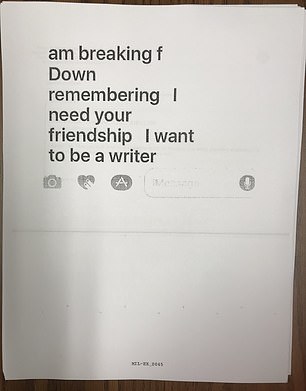 Weinstein texted gossip columnist AJ Benza saying he was ‘working on’ an ‘incident when I was a very young boy’ in therapy, but then asked him to delete the message

They show that Benza had messaged Weinstein late in 2017 as he faced a tide of negative press, suggesting that he could have been abused as a child.

‘Are you sure a rabbi or someone didn’t do things to you when you were a little boy?’ Benza said. ‘It takes a monster to make a monster,’ he added.

In a rambling response, Weinstein wrote: ‘I am working on it here [in therapy]. It is a incident when I was a very young boy.’

He then added: ‘I’m having a hard time I beg you not to say anything, please change subject and delete this, I am breaking down remembering.

Benza had initially messaged Weinstein suggesting he may have been abused, saying ‘it takes a monster to make a monster’

‘I need your friendship, I want to be a writer.’

The information did not appear in any subsequent story about Weinstein.

Benza is a former New York Daily News gossip columnist who was accused of taking money from Weinstein in 2004 to collect stories on other celebrities for his PR team to use as bartering chips to kill off negative coverage of the Miramax boss.

Weinstein denied the claims when they first appeared in 2017, saying only that Benza was paid for ‘PR work’.

Weeks after the text conversation, court documents show Weinstein’s PR team crafted a never-published statement attempting to paint himself as the victim.

‘Three months ago I could never say the following words, nor even think them to myself: I’m an addict. I’m a sex addict. I’m an anger addict,’ the statement said.

‘To medicate, I comfort myself with bad food. My mind sees despair. My body has trauma. Vets tell me I have PTSD.

Describing himself as ‘suicidal’, Weinstein’s statement continued: ‘The #MeToo movement is powerful. Hurtful, but deserved.

‘I read what Gwyneth Paltrow, Angelina Jolie, Salma Hayek, Ashley Judd, and so many others have written. While there are two sides to these stories, truthfully, I don’t know how to tell it without being crucified. 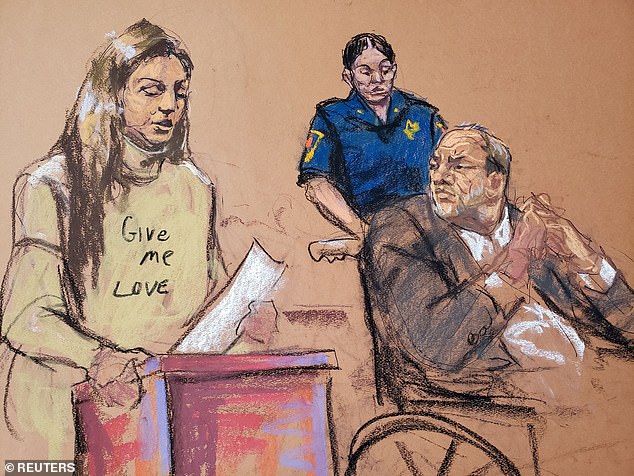 Weinstein was sentenced to 23 years in jail Wednesday for rape and sexual assault, meaning he will likely die behind bars (pictured in a court sketch listening to accuser Jessica Mann speak)

Weinstein was convicted of third degree rape and criminal sexual assault on February 24 for raping actress Jessica Mann in 2013 and forcibly performing oral sex on production assistant Mimi Haleyi in 2006.

He was acquitted of rape in the first degree and of two counts of predatory sexual assault which related to the two incidents.

On Thursday he was sentenced to 23 years in jail – 20 years on the criminal sex act charge and three years for third-degree rape.

The disgraced Hollywood producer’s defense team slammed the punishment as ‘obscene’ and have vowed to appeal.

The 67-year-old, who is in poor health and will not be eligible for parole for 20 years, could potentially spend the rest of his life in prison.

He is currently being held in a medical facility having complained of chest pains after his sentence was handed down.