Ramallah, West Bank: As the sun began to set over his home city of Jericho, veteran Palestinian peacemaker Saeb Erekat was laid to rest after a memorial ceremony and funeral attended by hundreds.

Erekat, 65, died on Tuesday in Jerusalem – the city whose eastern half he had claimed throughout a lifelong struggle for a negotiated Palestinian state that he never lived to see. 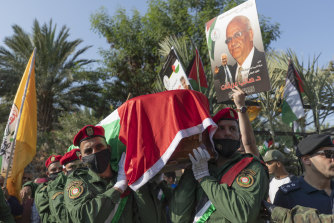 A Palestinian honour guard carries the body of Saeb Erekat into the cemetery during his funeral in the West Bank town of Jericho on Wednesday.Credit:AP

"To all the Palestinian people, my father is also your father and the father of the Palestinian cause," his daughter, Dr Salam Erekat — her first name means 'peace' in Arabic — said by his graveside in the Jordan Valley, her voice breaking.

A long-serving member of the nationalist party Fatah, Erekat was secretary-general of the Palestine Liberation Organisation and a confidant and adviser to its former leader Yasser Arafat and his successor, Palestinian President Mahmoud Abbas.

He announced a month ago he had contracted the coronavirus, and died on Tuesday after three weeks in a coma in an Israeli hospital in Jerusalem. 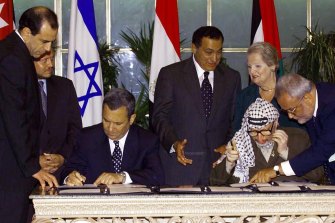 Doctors said that treating him was a "huge challenge" because he had undergone a lung transplant three years ago and had a "weakened immune system and bacterial infection, in addition to coronavirus", the BBC reported.

Erekat led the Palestinians in peace talks with Israel for many years until negotiations collapsed in 2014. In the final year of his life he was the main public face of Palestinian opposition to US President Donald Trump's blueprint for the Middle East, which would leave Israel in control of large parts of the occupied West Bank where Palestinians want a state.

He was among the most critical voices of the US-sponsored "normalisation deals", which saw the United Arab Emirates and Bahrain establish full diplomatic relations with Israel. Erekat described the deals as "the birth of Arab Zionism", accused the US, the UAE and Israeli leaders of "killing the two-state solution", and called the agreement "a poisoned dagger stabbed into the Palestinians' back".

As a fluent English speaker, Erekat often briefed international diplomats and journalists and, for many, he became the public face and voice of the Palestinian cause. Most of the time he remained optimistic about the future. "I think," he would often say, "Palestinians and Israelis are destined to live in peace… one day the occupation will end and the Israelis will stop being our occupiers and become our neighbours and there'll be a Palestinian state next to the state of Israel… That's what I commit my life to achieve."

Erekat was the author of eight books including Life is Negotiations, about his experience as a lead negotiator with Israel on what became the Oslo Accords.

Erekat's memorial took place on the anniversary of Arafat's death in 2004, marked in a separate ceremony earlier in the day.

In Ramallah, a procession of Palestinian soldiers carried Erekat's coffin through an outdoor plaza in Abbas's presidential compound. A military honour guard laid a wreath over his coffin. Abbas and other senior officials waved goodbye as the body was driven to Jericho for burial.

A large crowd gathered outside Erekat's Jericho home as his coffin was carried inside and his family privately bade him farewell.

Hundreds of mourners waving Palestinian flags and chanting "God is greatest" later joined in the funeral as he was buried in a palm tree-lined cemetery. Soldiers fired a rifle salute as a prayer was recited over the grave. 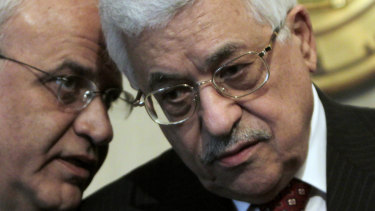 Abbas said Erekat’s death was a “great loss for Palestine and our people," and ordered flags to be flown at half-mast for three days.

Although he didn't succeed in achieving his main aim, Erekat told Reuters last year his vision would prevail. "The idea of the two-state solution will never die," he said. "There is no other option."