This is the shocking moment a HGV driver overtakes a lorry on double white lines before having a roadside scrap with another trucker.

Dashcam footage shows the vehicle racing past traffic before pulling in to the left hand lane on the A75 near Castle Douglas, Dumfries and Galloway.

A driver of another HGV then jumps from his cab and within seconds the pair slug it out in front of other motorists. 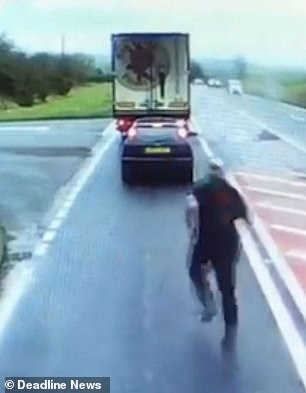 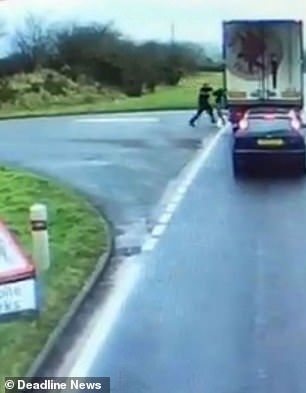 A lorry driver runs towards the white HGV after it overtakes, left, and the two drivers start to fight, right, at the side of the A75 near Castle Douglas, Dumfries and Galloway

The video was posted online by D & W Agriculture and the firm claimed one of their drivers was involved in the incident yesterday, which caused tailbacks on the road.

The clip begins with a white lorry, which has the logo of Netherlands-based Van Vliet Flower Group on the side, overtaking another HGV that has a dashcam.

The lorry begins to turn back into the left lane but is blocked by a car, so continues forward and overtakes before getting into the lane and blocking a junction.

Suddenly, a man runs from the right hand side of the lorry with a dashcam to the HGV ahead.

The male driver of the overtaking lorry then comes out and the two men start to tussle on the side of the road.

The drivers go back and forth before the driver who ran over grabs the other man and pushes him towards the vehicle.

He then appears to retaliate, and at one point can be seen in a fighting stance before he swings at the other man who then starts to back off.

The white lorry driver then walks away, with the other man following him for a few seconds before picking something up from the floor. 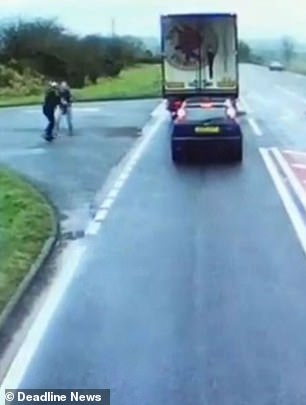 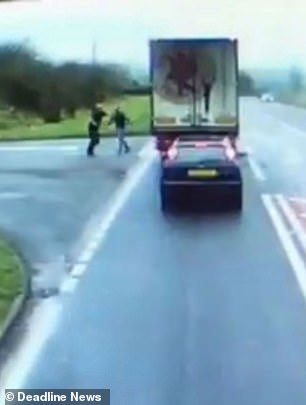 The two men push each other, right, and throw their arms up, left, during the angry incident

But as he is doing so, the white lorry driver runs up and appears to try and punch him, causing him to duck.

The two men then go back to their lorries before the lorry driver parked in front reappears, taking photographs of the other vehicle.

D & W Agri wrote a caption above the video, saying: ‘Well today this happened to one of our drivers and vehicles.

‘First I would like to thank the driver in question for not hitting back in defensive.’

Derek Templeton commented: ‘Never a dull moment on the A75.’ 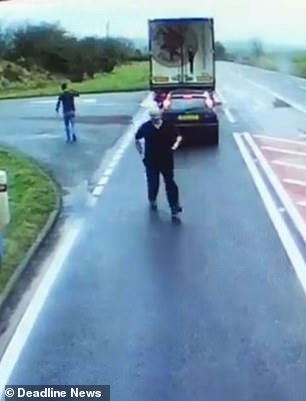 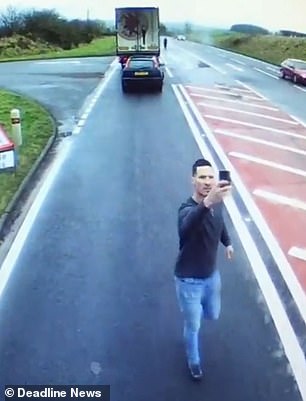 They walk back to their separate vehicles, left, before the white lorry driver, right, comes back to take a picture of the HGV with a dashcam

‘The incident occurred around 11:30 AM on Wednesday 6th February and involved the drivers of two HGVs.

‘We believe a number of vehicles waiting in a line of traffic will have seen the drivers fighting and are particularly keen to speak to the man who spoke to police officers when they initial arrived but left before giving his details.

‘As part of our investigation we are also keen to trace the driver of a blue/red Scania R580, described as 6ft 5, muscular build, short grey hair and bald on top with a long grey beard. He was wearing a black and grey shirt and jeans.

‘Anyone that can help should contact Police Scotland quoting incident 1271 of 6th Feb.’