Racist hipster, 45, is jailed for 14 months after attacking two nightclub bouncers for having short ‘p**i’ beards compared to his manicured facial fuzz 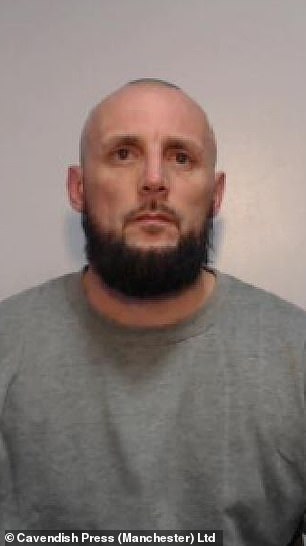 Father-of-two Damian Swain, 45, beat up a stranger at random and challenged two bouncers to a fight over the length of their beards in Greater Manchester

A father-of-two who beat up a stranger at random and challenged two bouncers to a fight over the length of their beards has been jailed for 14 months.

Swain – who has a manicured beard himself – berated Mr Wightman and flicked cigarette ash on his head after saying he had a ‘P**i beard’ – then labelled Badawed ‘a dirty brown’ when he noticed he too had stubble on his chin.

When a friend of the bouncers arrived at the club also sporting a small beard, Swain grabbed him by the face, with his fingers and thumb either side of his chin, and said: ‘What the f***’s that? You’re like these two idiots here.’

He then adopted a karate stance and told the bemused bouncers: ‘I’ll bang you. I’ll fight you both.’

Swain, from Stalybridge, was eventually thrown out of the Back to the 80s bar but attacked a man waiting for a taxi at a nearby rank.

He punched him ‘non-stop like a boxer.’ The victim had to be treated in hospital for severe bruising and swelling to his face and body.

Swain was later arrested and blamed his behaviour on changing his medication.

One witness said of him: ‘He just kept going on and on about how he didn’t like these men’s beards.’ 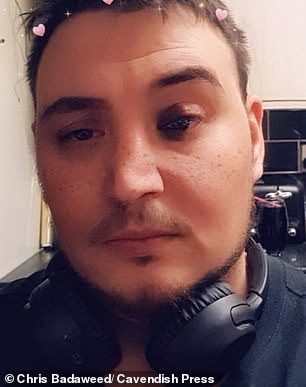 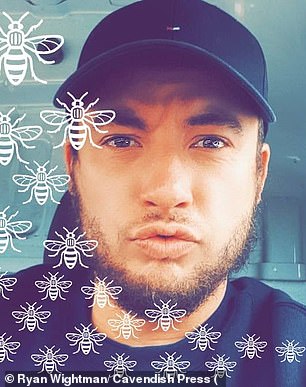 The incident occurred at 11.30pm on March 8 last year after Swain had been drinking heavily.

Prosecutor Andrew Evans said: ‘Ryan Wightman was working as a doorman and was on a cigarette break when the defendant approached him and greeted him in Arabic.

‘He expressed surprise at this but the defendant intimated that he thought Mr Wightman might be in his words “a P**i” because of what he saw as his “P**i beard”.

Wightman walked away and began speaking to a friend who had just driven up.

‘As he was talking to the friend through the driver’s window of the car Wightman’s colleague Chris Badawed shouted at him back by the door, saying the defendant was ‘flicking ash on his head’ from his cigarette.

‘Mr Wightman looked over to see the defendant grab his friend through the open car window. He grabbed him by the face, his fingers and thumb either side of his chin saying “What the f***’s that? You’re like these two idiots here” – which can only relate to the apparent issue that the defendant had with beards.

‘The grabbing hand was swatted away and the car driven off to a nearby taxi rank and Mr Wightman retreated to the door ready to bar the defendant should he try to re-enter the club. The defendant returned to them again, making more comments about “P**i beards” and was told to leave.

‘The defendant told Mr Badawed that “he wasn’t even a P**i but a dirty brown” and tried to push Mr Wightman, who stepped aside whilst Mr Badawed blocked the defendant him with an arm. The defendant then rounded on Mr Badawed saying he would “bang him” and “fight them both”.

‘Mr Badawed then says that “completely out of the blue” the defendant grabbed him by the chin with such force he suffered a cut to the interior of his lip.

‘He tried to restrain him and recalls the defendant “trying to do some sort of karate stance” whilst Wightman radioed for assistance from other door staff nearby. 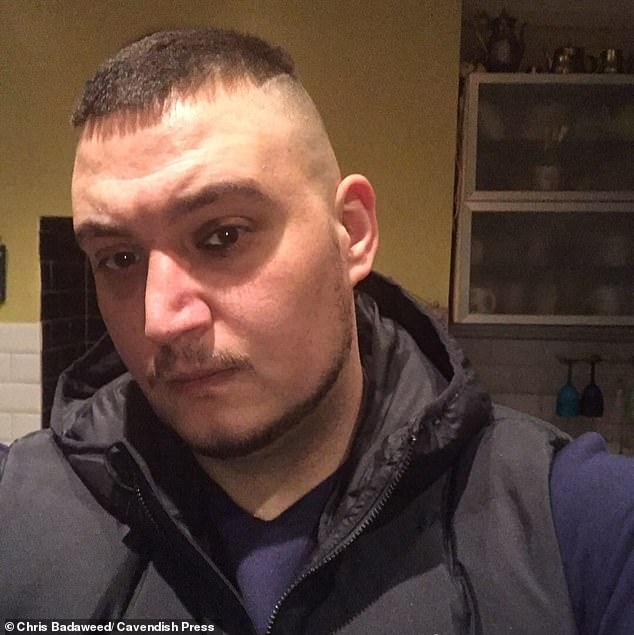 ‘Two other staff arrived from nearby bars and they all tried to calm the defendant down. One witness said he “kept going on about how he didn’t like the two men’s beards”. Eventually he moved off towards another pub, accompanied by a friend but an hour and a half later at around 1am, Mr Wightman spotted the defendant again, shouting at that friend near the taxi rank up the street.

‘He then watched as the defendant began to batter the door of the taxi rank demanding to be let in. What he was watching was the defendant attacking a total stranger, Steven Brown, who’d been waiting inside the taxi office with his partner.

‘Mr Brown recalls the defendant calling him a burglar and asking if he “knew the Garsides” before grabbing his shirt and punched him repeatedly in the face. A taxi driver described this assault as “hitting him non-stop like watching boxing” and said “he kept going out and coming back in hitting him again”.

‘Mr Brown was diagnosed with bruising and swelling to the left eye, slightly closing the eye, grazes to his torso and flank, his back and his shoulder.

‘There were swellings to his forehead and grazes to his sternum. He underwent a chest and head x-ray and a CT scan of his head and found to have no internal injury relating to the assault.

Swan had 51 previous offences on his record including GBH, assault on police and racially aggravated public order matters.

His lawyer Thomas Worsfold said: ‘This was a very serious assault and it was fortunate that no further serious harm was caused to other people. 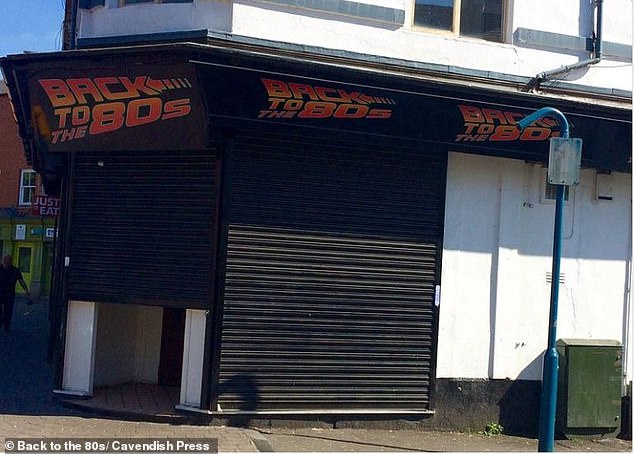 When a friend of the bouncers arrived at the club (pictured) also sporting a small beard, Swain grabbed him by the face, with his fingers and thumb either side of his chin, and said: ‘What the f***’s that? You’re like these two idiots here’

‘The defendant is genuinely remorseful and shows empathy for his victims in a report on him. The defendant was in drink and had changed his medication in the week before this offence to one which was double the strength of his previous medication.

‘His partner is present in court to support him and they have two children aged one and four together. He says it would have a serious and harmful impact on his partner and children if he were to go to prison.’

But sentencing Judge John Edwards told Swain: ‘Your behaviour was totally inexcusable and the comments you made are as vile as they are unacceptable. None of these people did anything to deserve this verbal and physical onslaught of abuse by you.

‘You landed no fewer than a dozen punches on the victim of your ferocious assault and you used a shod foot. It is more by luck than judgement that he has not ended up with extremely serious injuries. Your behaviour does not set a good example to your children.’