Holidaymaker wins £29,000 payout from TUI after violent tummy bug he caught while staying at five-star Turkish hotel caused him to lose 1.5 stone and suffer stomach cramps for five years 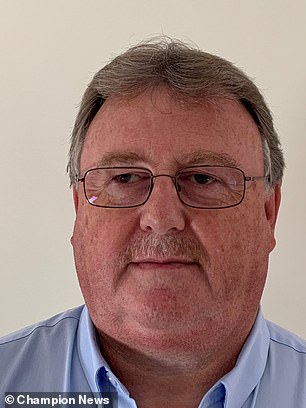 Holidaymaker Peter Griffiths, 58, (pictured) who lost 1.5 stone after contracting a violent stomach bug at a luxury five-star hotel has won £29,000 compensation from TUI

A holidaymaker who lost 1.5 stone after contracting a violent stomach bug at a luxury five-star hotel has won £29,000 compensation from TUI.

Peter Griffiths, 58, was staying at the Aqua Fantasy Aqua Park Hotel and Spa, in Izmir, Turkey, when he was struck down by stomach cramps, a fever and diarrhoea on an all-inclusive family holiday in 2014.

The IT worker spent two days in bed before he was able to get to a pharmacy.

But he was hit again by illness three days later and ended up on a drip and in hospital for the rest of his stay.

He blamed the food at the hotel for his illness, which saw him lose 21 lbs in weight, and sued holiday giant TUI. He said he still has stomach cramps more than five years later.

His case was originally rejected by a judge at Birmingham County Court last September, but after an appeal at the High Court, Mr Justice Martin Spencer awarded him nearly £30,000 compensation.

The judge said: ‘As a result of this illness he lost about 1.5 stone in weight, his appetite was affected for five to six months, and by the time of the trial he was still suffering with stomach churning and bubbling, cramping pains in his stomach, increased stomach bloating and increased frequency of bowel movements.’

The court heard Mr Griffiths, of Fleet, Hampshire, was on holiday with his 58-year-old wife and then 12-year-old son in August 2014 when he was struck down by the bug.

He said he took all of his meals at the hotel, which boasts six restaurants and nine bars along with a huge water park.

The only time he ate out was during his brief trip to a local pharmacy.

His lawyers said his hygiene concerns included food being left outside and not in fridges, sometimes being served lukewarm, as well as birds and cats frequently eating food left over from guests. 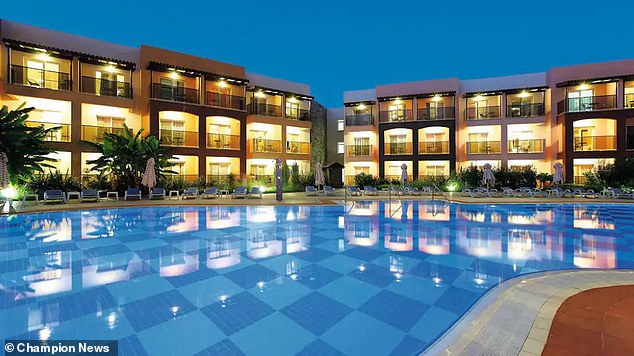 Peter Griffiths, 58, was staying at the Aqua Fantasy Aqua Park Hotel and Spa, in Izmir, Turkey, (pictured) when he was struck down by stomach cramps, a fever and diarrhoea on an all-inclusive family holiday in 2014

He first became ill on August 4, he said, and spent two days in bed before going to the pharmacy for medication on August 7.

He then fell ill again on August 10 and was hospitalised three days later.

Mr Griffiths was treated with intravenous fluids and antibiotics and was well enough just in time to fly home on August 16.

During the trial last year, TUI denied liability, insisting there were other potential sources of his illness.

It was impossible to establish the precise source, the court heard, and TUI’s lawyers pointed out that gastric illness is a ‘common feature of overseas travel’.

In Mr Griffiths’ case, he had eaten a burger while waiting for his flight out at Birmingham Airport, and defense lawyers suggested his meal out in Turkey might well have caused his second bout of sickness.

The county court judge rejected Mr Griffiths’ claim, saying she was unconvinced by expert evidence from a gastroenterologist who pinpointed the hotel as the likely source of contamination.

The expert said it was possible Mr Griffiths had contracted two separate infections, but thought it was probable that the illness was caused by ‘the consumption of contaminated food or fluid from the hotel’.

But the judge said it was unclear why the professor had dismissed eating out at the local restaurant as a source of infection and there was no ‘clear train of logic’.

However, Mr Justice Spencer at the High Court overruled her decision, pointing out that the professor’s report stood alone as expert evidence.

He said he ‘took the view that the court below was not entitled to reject the report because of its perceived deficiencies’. 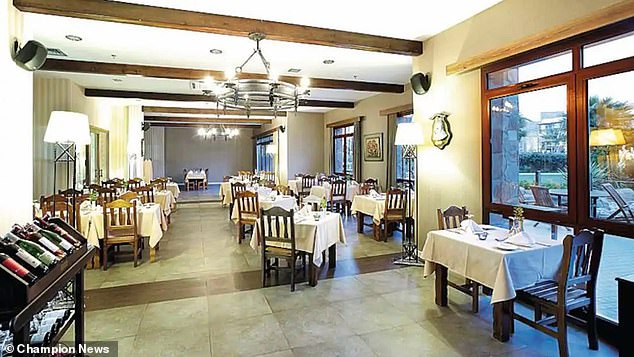 He said he took all of his meals at the hotel, which boasts six restaurants (once pictured) and nine bars along with a huge water park

‘By ascribing effectively nil weight to the report, the learned judge was ruling that the report did not meet the minimum requirements for it to be accepted as evidence in the case, and in that respect I take the view that she was wrong,’ he said.

He allowed Mr Griffiths’ appeal and awarded him £29,000 in compensation.

Speaking after the ruling, Mr Griffiths said he had been ‘really looking forward’ to his holiday, but it had been ‘completely ruined.’

‘It was the most unwell I have ever been, and I was worried that I wouldn’t even be able to fly home,’ he said.

‘Thankfully the hospital discharged me in time for our flight, but I had to take a lot of medication including antibiotics.

‘I went to see my GP several times after getting back home and I am still suffering to this day. It is concerning to think that this could affect me for the rest of my life.

‘To this day I still have a number of questions and concerns about how and why I became poorly.

‘Thankfully, my medical insurer stepped in to help me with the hospital bills in Turkey otherwise I really don’t know what I would have done. I would rather not be in this position but I felt that I had been left with no other option but to pursue my legal case.

‘All I wanted is to be given answers to the questions I have so I can try and put what happened behind me. This judgment means a lot to me and it finally gives me the answers I deserve and be able to move on with my life finally.’

His solicitor, Jatinder Paul, of Irwin Mitchell, later commented: ‘Going on holiday is meant to be an enjoyable time, but Peter’s time away with his family turned out to be anything but enjoyable.

‘The last six years have been incredibly difficult for Peter. He has had to cope with the ongoing effects of his illness while also striving for answers regarding the concerns he has about how he became ill.

‘We are pleased to have secured this important judgment for Peter which will bring greater clarity for holidaymakers who wish to pursue legal claims as to what is expected from the medical experts who assist in proving these claims.

‘This judgment is a major milestone in Peter being able to secure answers to an issue which has had a significant impact upon his life over the last six years and we will continue to support him in finalising the legal process.’