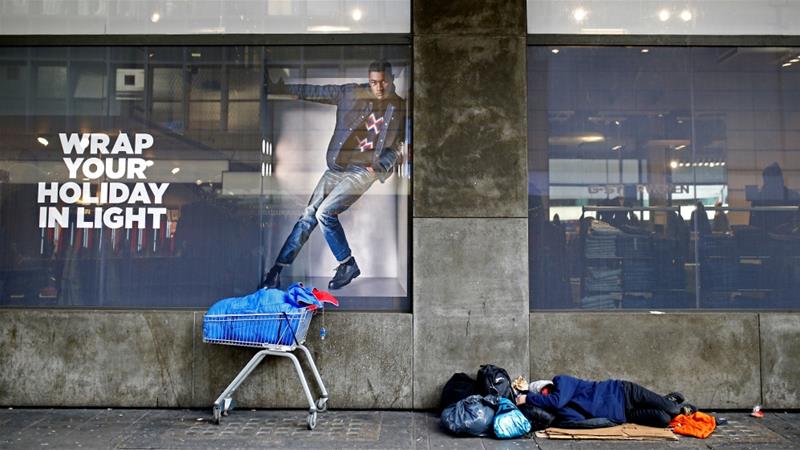 Nearly 600 homeless people in England and Wales died in the last year, an increase of 24 percent over the past five years, government figures have revealed.

Rising from 475 in 2014 to 597 in 2017, deaths among the homeless increased annually – barring a slight drop in 2013 – according to figures released by the UK Office for National Statistics (ONS) on Thursday.

The report came days after a 45-year-old man collapsed outside the UK parliament and died.

The ONS defines a homeless person as those recorded as “having no fixed abode, sleeping rough or using emergency accommodation such as homeless shelters and direct access hostels.”

Drug poisoning, suicide or alcohol abuse accounted for more than half the deaths in 2017 while these reasons made for just three percent of the fatalities among the general population in the UK last year.

Ben Humberstone, deputy director for health analysis and life events at the ONS, said the purpose of the study was to shed light on the pressing social issue.

“Every year, hundreds of people die while homeless. These are some of the most vulnerable members of our society so it was vital that we produced estimates of sufficient quality to properly shine a light on this critical issue,” he said.

Geographically, London and the North West of England show the highest mortality rates among rough sleepers.

In the northwest, Manchester and Liverpool experienced the largest increase in homeless fatalities over the five-year period, from 55 in 2013 to 119 in 2017.

In the northeast and Yorkshire, deaths rose by 71 percent and 58 percent respectively since 2013.

The ONS calculated the figures by checking death registrations in England and Wales for information that a person was homeless at the time of their death.

While the findings are the first official estimates of the homeless deaths in England and Wales, the figures are experimental and are yet to be assessed against the rigorous quality standards of National Statistics.

An UK government spokeswoman said in October that 1.2 billion pounds ($1.5bn) would be invested to tackle “all forms of homelessness” and end rough sleeping by 2027.

The British media also reported that the government pledged in October that local authorities would investigate all homeless deaths.

Yet, more than 24,000 people in Britain will spend this holiday season sleeping rough or on public transport, according to figures by the homelessness charity, Crisis.

Official figures collated by homelessness charities in the UK say rough sleepers have quadrupled, increasing by 169 percent since 2010, the Guardian reported in January.

UK housing secretary James Brokenshire said on Tuesday that homelessness is not a result of the government policy. Instead, he blamed the rise on the spread of psychoactive drugs such as spice, growth in non-UK nationals on the streets, and family breakdown,

Following the release of the ONS figures, Brokenshire said: “No one is meant to spend their lives on the streets or without a home to call their own. Every death on our streets is too many and it is simply unacceptable to see lives cut short this way,” he said.

“To stop people from becoming homeless in the first place, we’ve changed the law to require councils to provide early support for those at risk of being left with nowhere left to go, are boosting access to affordable housing and making renting more secure.”

But UK charities believe the government needs to do more to tackle the issue.

Greg Beales, campaign director at UK charity, Shelter, told Al Jazeera: “This appalling loss of life should be a source of national shame. There is nothing inevitable about homelessness or about these tragic deaths which are a consequence of a housing system which fails too many people.”

“Our crippling shortage of social housing and a threadbare safety net are at the root of this national emergency and we call on the government to make this year a turning point in the fight to ensure that there is a safe home for all those who need it.”

Rick Henderson, chief executive of Homeless Link, another UK charity, said it was “unacceptable” that so many homeless people are dying.

“Every time someone who is homeless dies, there should be a thorough investigation into the cause of death, so we can learn how to prevent them in the future.”

“But we know that it is preventable … The government must urgently look at solving the structural causes of homelessness by tackling poverty,  the broken welfare system and building more genuinely affordable housing.”