Year 12 student Iman Al Atassi has overcome bigger challenges than those thrown up in 2020, including fleeing Syria with her family five years ago.

Iman said this year's lockdown was crazy and challenging, from not being able to see friends or teachers face to face, to staring at screens for 12 hours a day. 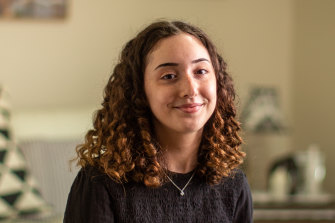 Iman, 18, has just finished year 12 at St Albans College. She and her family moved to Australia in 2015 after fleeing Syria.Credit:Scott McNaughton

"How did we get through it? Honestly, we just had to persevere and try our best, because it's year 12 and we have to work hard to get where we want even though everything was so disruptive," said Iman, who, like almost 65,000 other year 12 students, will get her results on Wednesday morning.

Iman said she tried to focus on the bright side of remote learning: being able to sleep in and eat during lessons, her family pitching in to provide a quiet study environment and the support of teachers.

The St Albans Secondary College student is hoping her hard work will lead her to a computer science degree at Monash University.

Iman is proud to have studied in English, a language she began learning just five years ago.

Iman and her family moved to Australia in 2015 after fleeing violence in Syria. Before arriving they lived in Turkey for 18 months and she attended a temporary school.

"We had to move there because Syria was not safe but it was really hard [in Turkey] – an unfamiliar environment and language," she said.

"Then coming to Australia, again it was really nerve-wracking."

Cheryl Kane, child safety and wellbeing co-ordinator at Aquinas College in Ringwood, said students had shown grit and worked out how capable they really were. 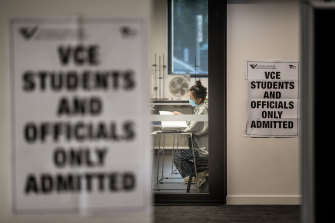 "It was rocky for some because not every child comes from a family that is focused on education. But kids, because they had to, they did," Mrs Kane said.

After spending more time learning from home than in classrooms this year, Victorian students will receive their VCE or VCAL results from 7am. This includes 50,284 who will graduate in VCE and a record 14,529 VCAL graduates.

Among them are 38 students who received an ATAR of 99.95, the highest rank possible. The average ATAR across all students was 68.14, the Victorian Tertiary Admissions Centre said.

This year, 98.3 per cent of student successfully completed their VCE, up slightly from 98.1 per cent last year, while 14,215 received a study score of 40 or above in at least one subject, putting them in the top 9 per cent in the state. 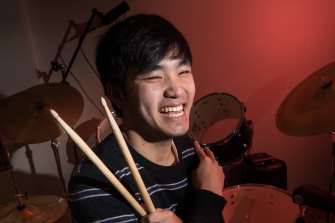 Khoa Tran, 18, is in year 12 at Victoria University Secondary College and has just made it through the VCE and the pandemic.Credit:Jason South

"I got a 31 and that was the top score for music performance at my school. I was really surprised when I got the result," Khoa said.

"I started playing drums in year 9. I have a drum kit at home because it relieves me from stress."

Khoa, who has autism, said the hardest part of lockdown in year 12 was missing friends and the difficulty he had with concentrating.

"It helped to talk to my friends because we all faced the similar situation of being confined to our homes," he said.

Though it took a lot to stay motivated throughout the year, Khoa is feeling good about receiving his exam results and hopes to study law next year.

"I'm looking forward to it being over," he said.

Mrs Kane said students had achieved beyond her expectations by showing up and doing their best.

"They missed out on lots of milestones, but the longer the pandemic went on, they more they grew with acceptance of that," she said.

In previous years, students at many schools would flock to school breakfasts to celebrate and commiserate.

But this year, school staff, including career counsellors, will interrupt their Christmas break to support students, mostly online, as they receive their results.

Mr Axup said while about 90 per cent of students tended to get into one of their top three university course preferences, the school's careers practitioner would be there for students who were disappointed.

"He's been doing most of the consultations with the year 12s during lockdown via Zoom anyway, so they're all used to it," he said.

"There’s probably a little bit of uncertainty, but not more than a normal year, quite frankly."

To compensate for months of remote learning, each VCE student has been assessed for special consideration. Tens of thousands of students also applied for a scheme that allows universities to effectively bump up students' ATARs if their ranking falls short of a course's minimum entry requirement.

Students have another five days to alter their preferences for university.

A post-results service for students looking for support and advice will run between results day and January 3, the day before the deadline for changing university preferences. It will be run by the Victorian Curriculum and Assessment Authority and Victorian Tertiary Admissions Centre.

"Congratulations to every VCE and VCAL student – this has been an incredibly challenging year but every student of the class of 2020 has shown outstanding resilience and commitment," Ms Tierney said.