London: Walking up the stairs at Mansion House, the Lord Mayor of London's spectacular home and office, I pass what is probably, judging by the hilariously medieval outfit, a yeoman.

I couldn’t tell you what a yeoman is, but I know one when I see one. 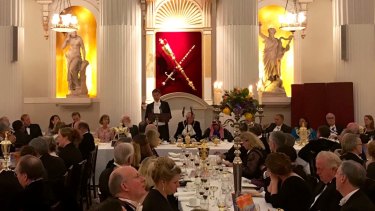 The 2019 Easter Banquet hosted by the Lord Mayor of London.Credit:Twitter/@citylordmayor

I turn a corner, past a small “salon” orchestra playing delightful classical music, into a big pillared hall.

Another chap in fancy dress glances at my invitation, winks and me and says “that’s an easy one”.

And with a piercing yell, he announces my presence. 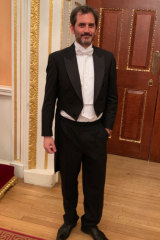 And in my smartest (hired) white tie and tails, I step forward.

This, I decide, is how I want to enter all rooms from now on.

For centuries the Lord Mayor of London’s banquets, held in this 280 year-old Grade-I listed building at the heart of the London’s Square Mile, have been among the fanciest do’s in the land.

The world’s oldest continuously elected local authority, more than 950 years old, uses tradition as a glove of finest velvet covering the iron fist of commerce that is the city’s true nature. The City is run by merchant bankers, but they call themselves aldermen and sheriffs.

And it’s all great fun.

The Easter Banquet each year is for London’s diplomatic corps and has been held annually for over 100 years. When it started there were only six ambassadors to entertain, dining alongside members of the royal family, the military and members of the judiciary. Guests would have arrived by sailing up the Thames.

There are now 270 ambassadors and high commissioners, who enjoy it as a networking event – and each year the Foreign Secretary preaches the virtues (and talks up the importance) of Great Britain.

I have no idea how I got on the list. Best clerical error ever. Clearly I’m pretty low on the pecking order, though I get my name shouted, and shake the Lord Mayor (and wife’s) hands on the way in.

The Lord Mayor is stood in front of a throne-like chair and surrounded by men in shiny helmets carrying huge pikes. One of them has a huge drum. He does nothing with it except give it one big whack when the Foreign Secretary arrives.

I circulate, knowing absolutely nobody here. Everyone looks super-confident. I’m seized by an irrational urge to go up to one of the obvious bishops and say “so, what do you do?”

Then it’s time to go into the lofty dining hall, known as the Egyptian Hall. The architect hadn’t actually been to Egypt, but he’d read about it in a book by Roman author Vitruvius.

Niches around the room hold lifesize statues of important people like Alexander the Great and Alastor, who I guess is one of the Avengers.

I’m sat next to the Serbian ambassador, who’s a hoot. I wonder who Serbia offended to be put next to a journalist, but she’s having a great time.

Then proceedings begin in earnest.

There are endless traditions that I have to catch up on as they happen.

Usefully you get a warning: some rather good looking yeowomen (I may have just made up that word) wearing rapiers come in and blare trumpets.

Then you have to do something: when the VIPs go in and out you have to clap in time, when the band up on the first floor balcony plays the national anthem you don’t sing.

There are toasts: “The Queen” (sip your port, fanfare), “The Prince Philip Duke of Edinburgh the Prince of Wales the Duchess of Cornwall and the other members of the royal family” (sip port, fanfare), “the sovereigns and heads of state of those countries here represented this evening” (sip port).

After the meal and some very nice wine it’s time for speeches. The dean of the diplomatic corps, Kuwaiti ambassador Khaled Al-Duwaisan, peppers his with corny jokes. The Lord Mayor talks about the digital revolution (the right kind of revolution, clearly, that leaves all the same people running things).

Then Foreign Secretary Jeremy Hunt gives a speech, which starts with banal praise of the British education system then abruptly, for no reason I could guess (apart from possible leadership ambitions) warned about the danger of “precision strikes by hypersonic missiles followed by swarms of unmanned aircraft” and the need to double defence spending.

The event draws to a close. We all stand up to clap out the VIPs.

Up above the band, in the vaulted roof, I notice, there’s a stained glass window depicting the ruthless quashing of the Peasants Revolt in 1381.