Paul Mitchell was derided as an “embarrassment” by his own family and friends after clumping Jack Grealish. 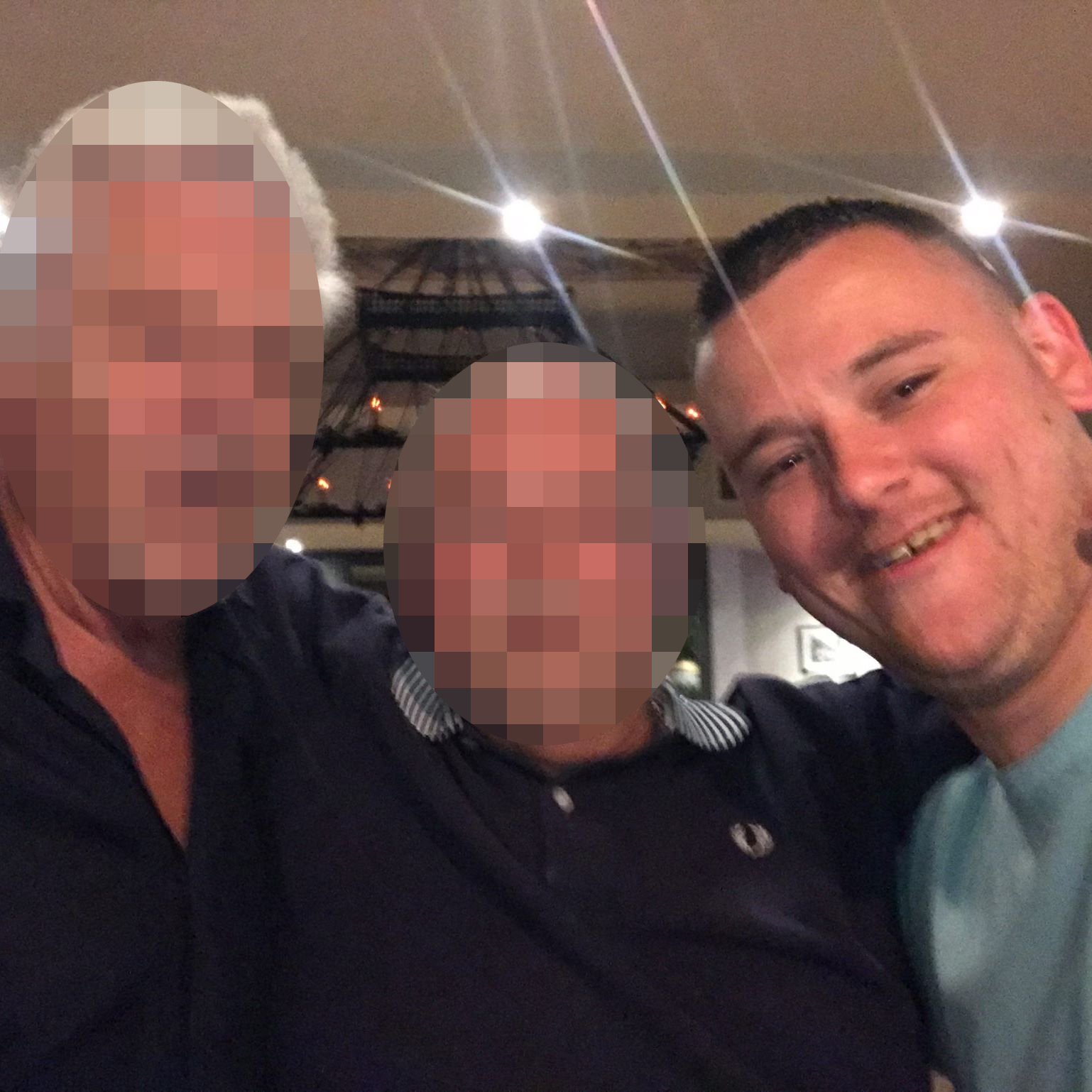 The father-of-one is facing a life ban from football after being arrested for his shocking outburst on live TV.

And jubilant Villa fans went online to suggest calling Mitchell’s place of work – a bar in Tamworth – to thank him for their win.

The meat-head’s target Grealish picked himself up to score the only goal in a 1-0 win in the Second City derby at St Andrew's.

Meanwhile, after the Villa star scored, he appeared to be kneed by a steward as he celebrated in the crowd with away fans.

The Championship game had not even reached the 10-minute mark when Grealish was assaulted. 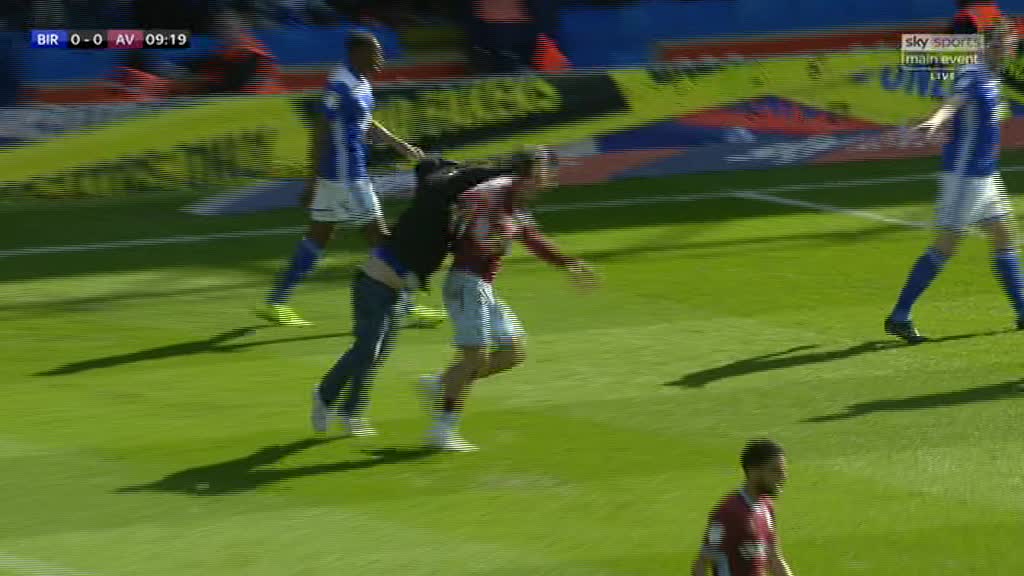 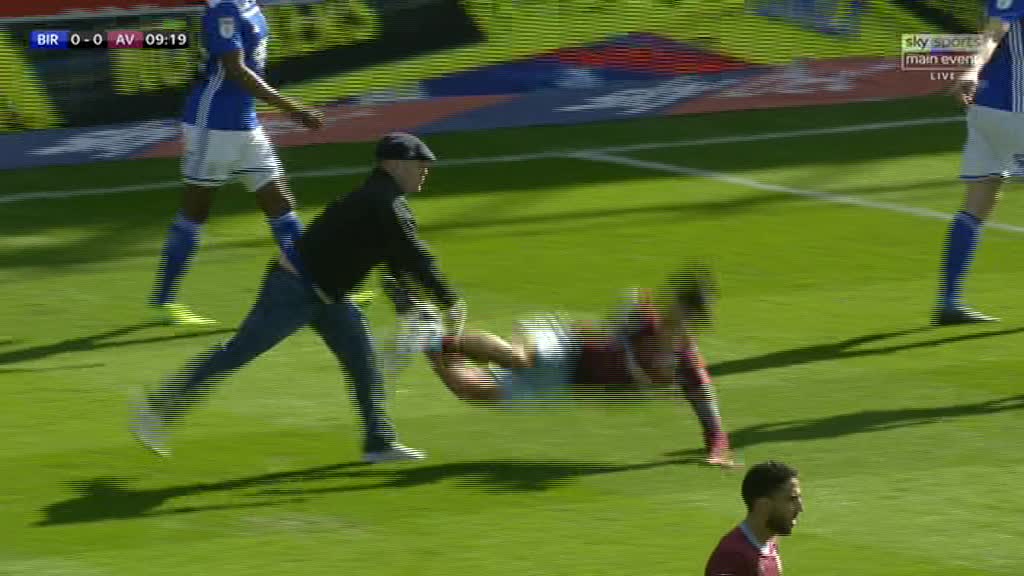 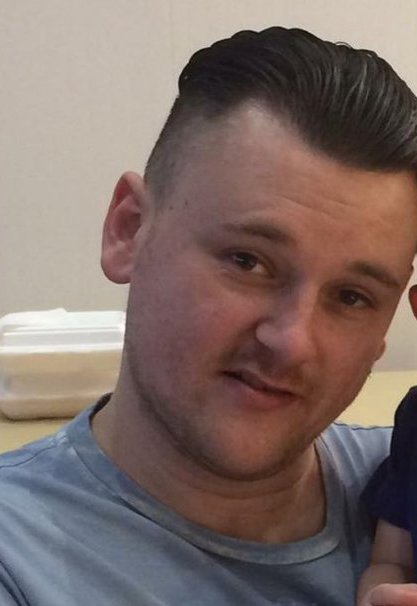 Players from both teams as well as a steward then ran towards the yob and managed to get him off the pitch.

Mitchell shockingly saluted his actions as he was being led away and fans were even heard CHEERING him off.

Speaking about the attack after the game Grealish, who incredibly ended up being the match-winner, said: "I was just unaware at the time.I think we had a corner or a throw-in and I was walking into position and I just felt a whack around the side of the face.

"There's rivalry in football but I don't think there is any place for that really. 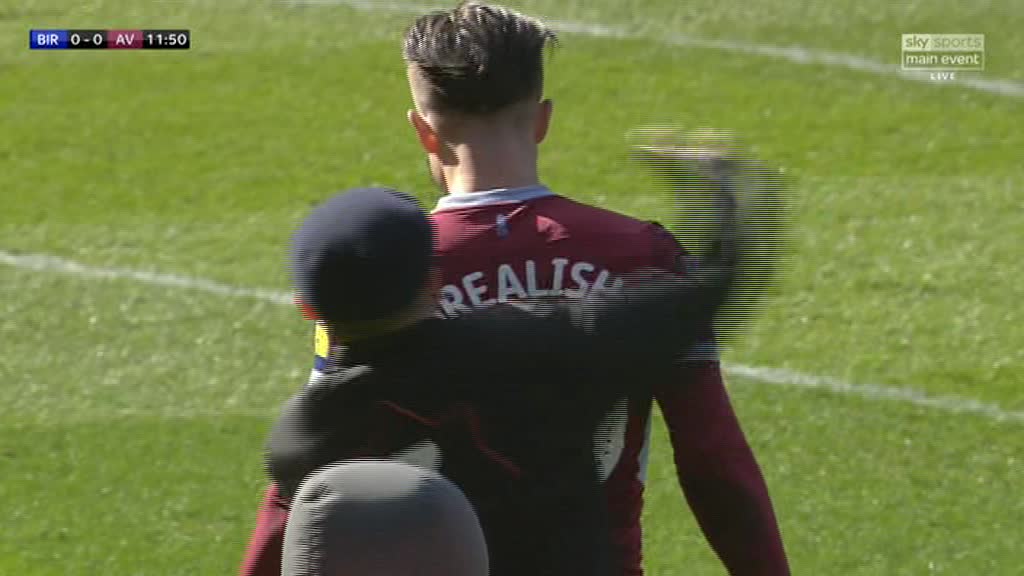 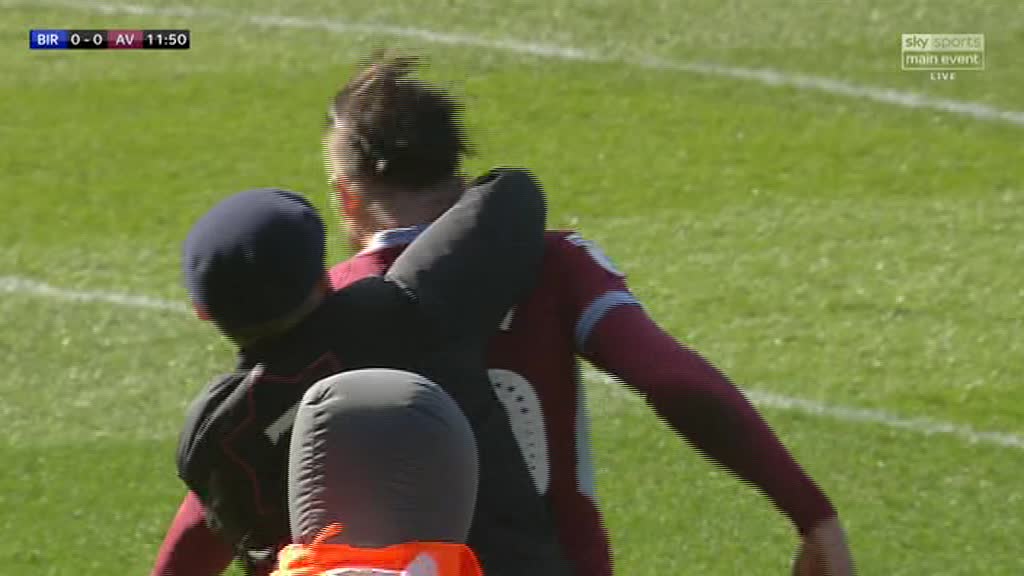 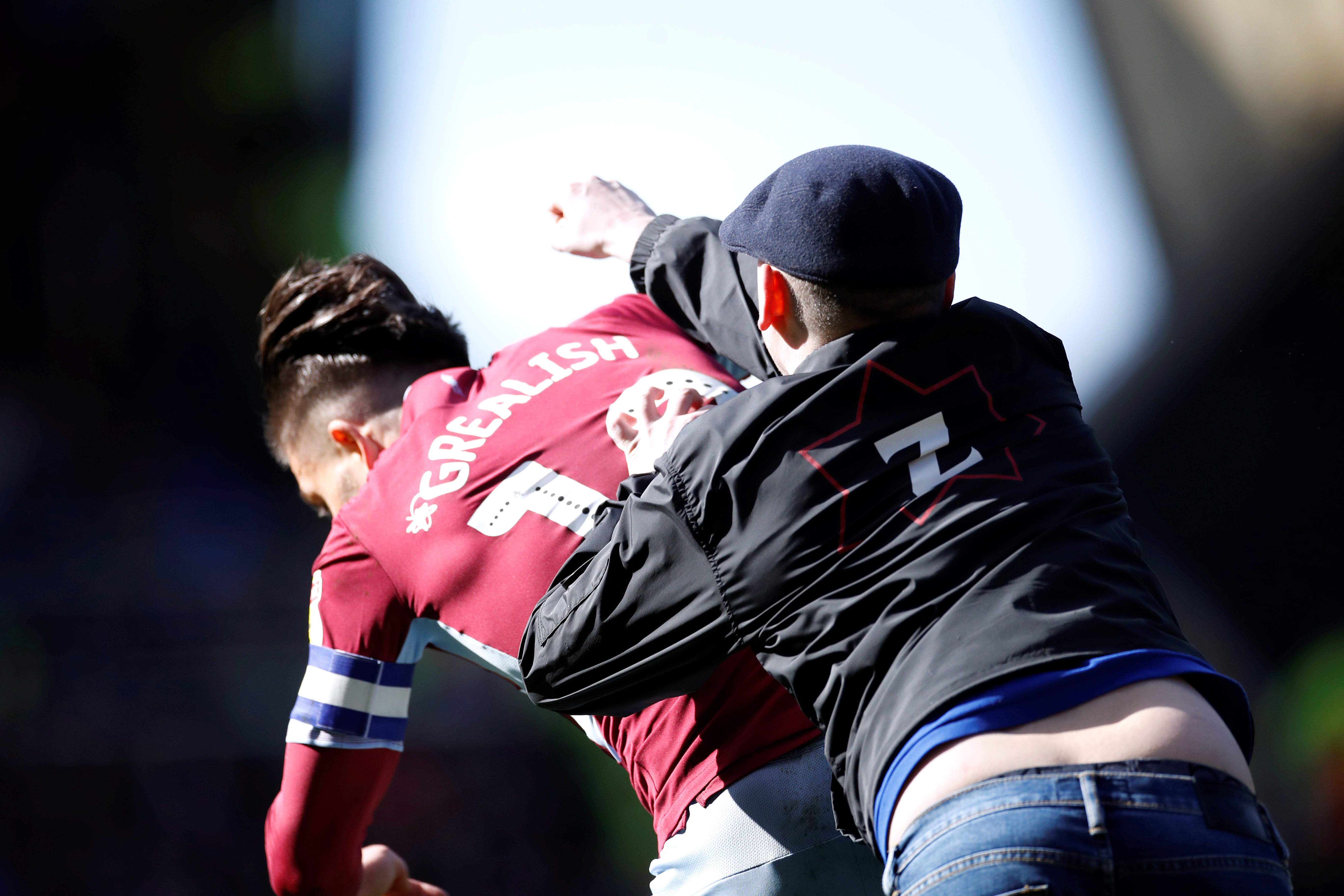 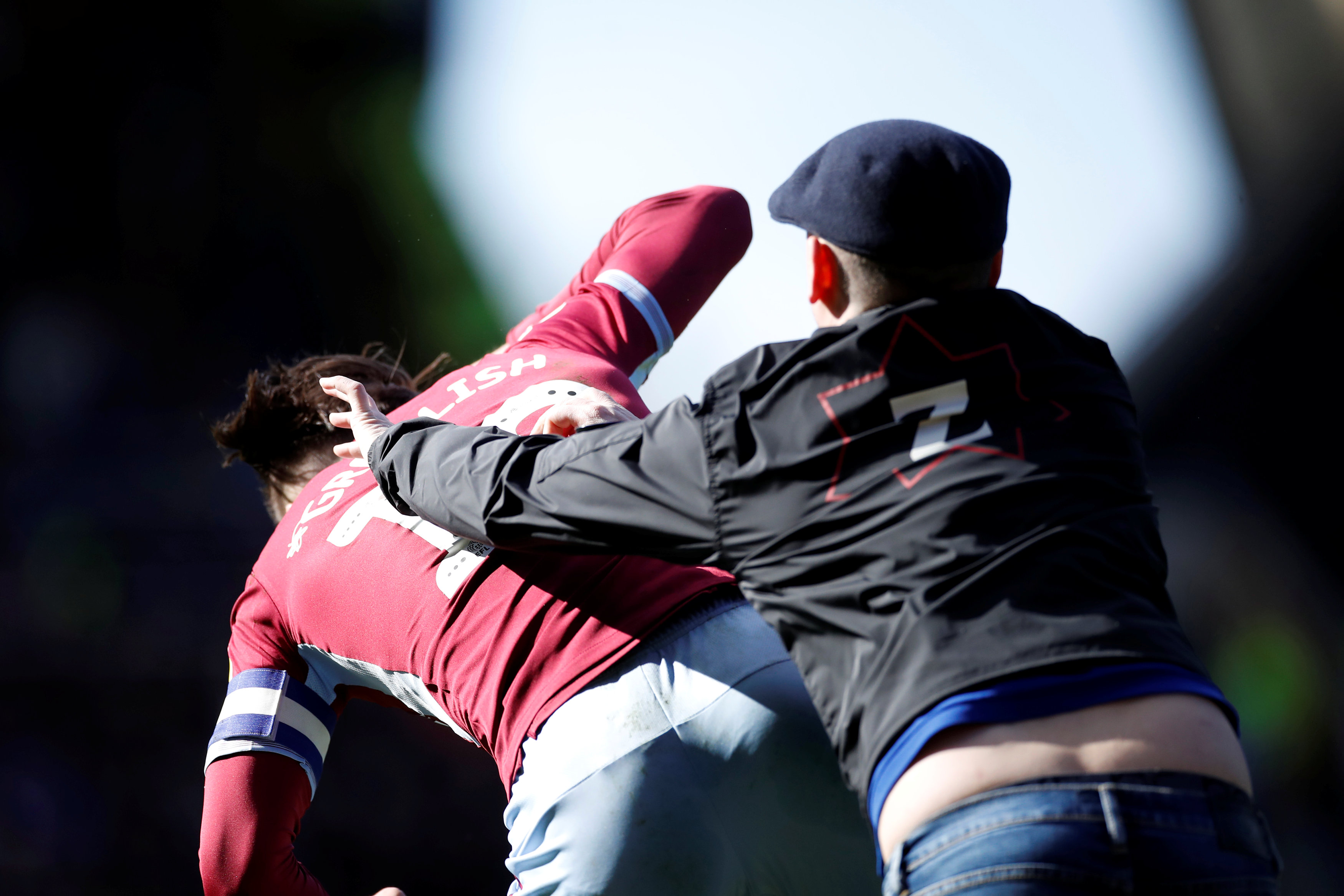 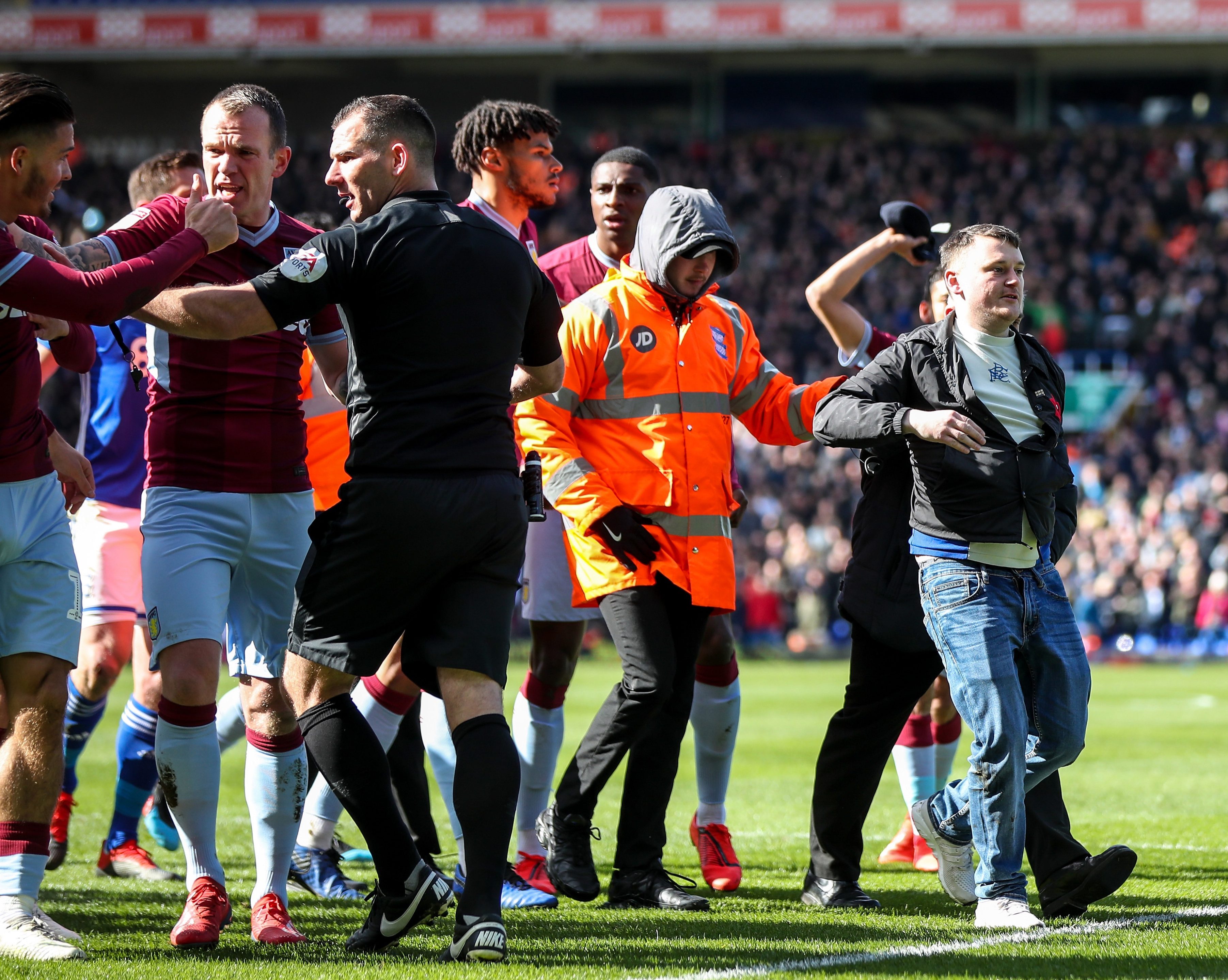 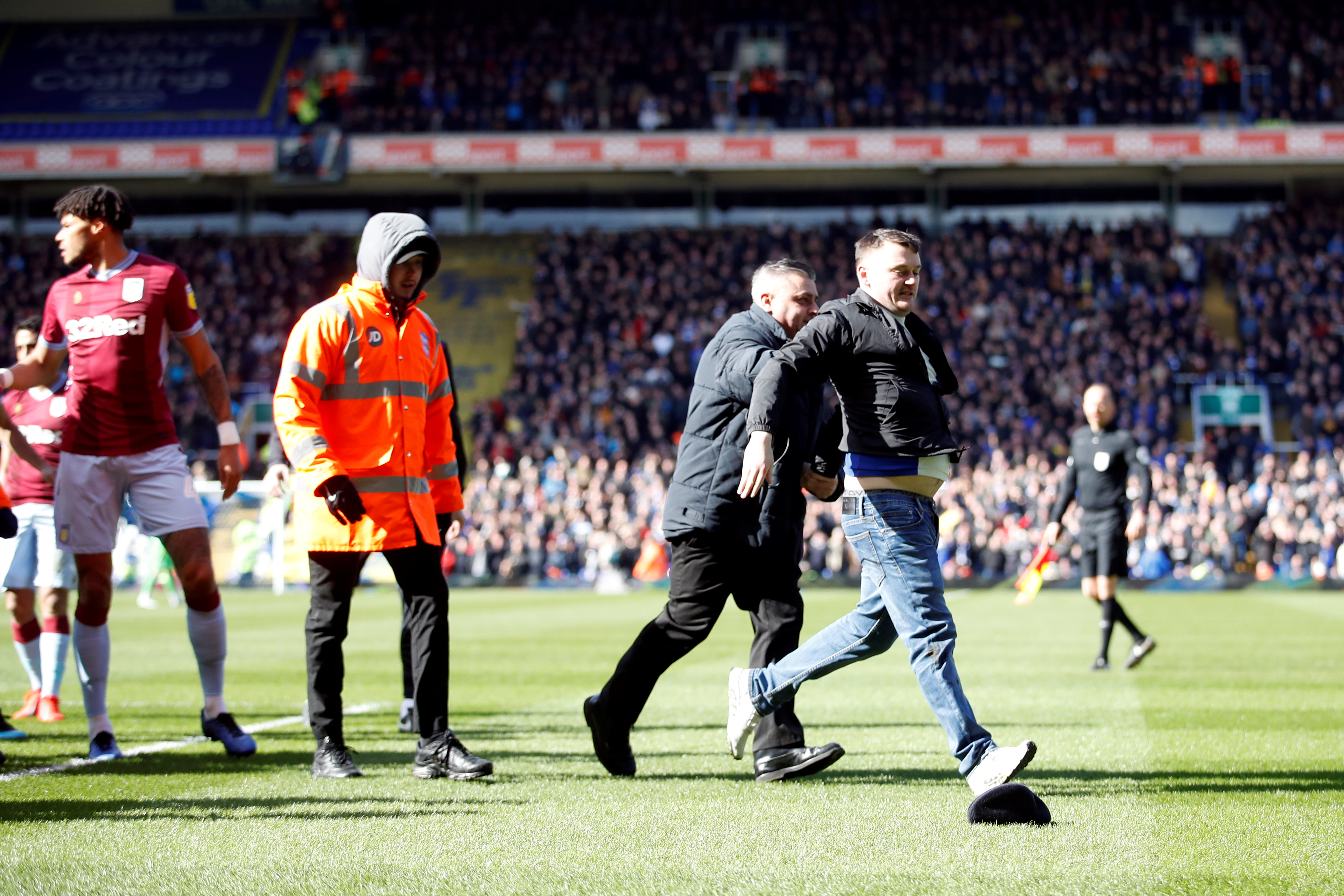 "But I just tried to get on with my job in the end and I think I did.
"I scored the winner and we've come away with three points."

Grealish, 23, is a Villa youth product and was captaining the side in the fiercely-contested derby game.

The toxic atmosphere was evident in the early stages of the fiery clash when Blues midfielder Maikel Kieftenbeld was booked for a foul on Grealish. 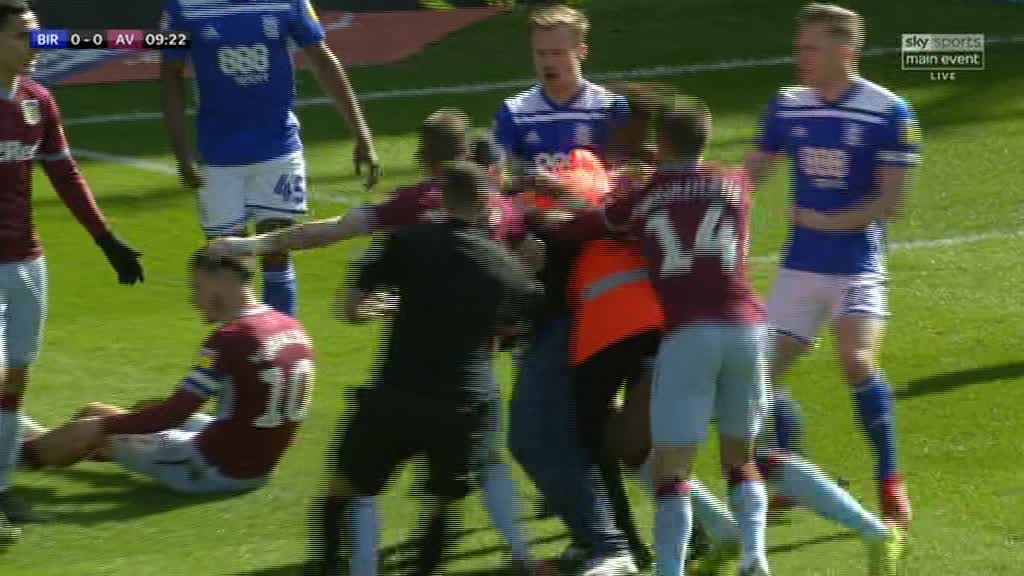 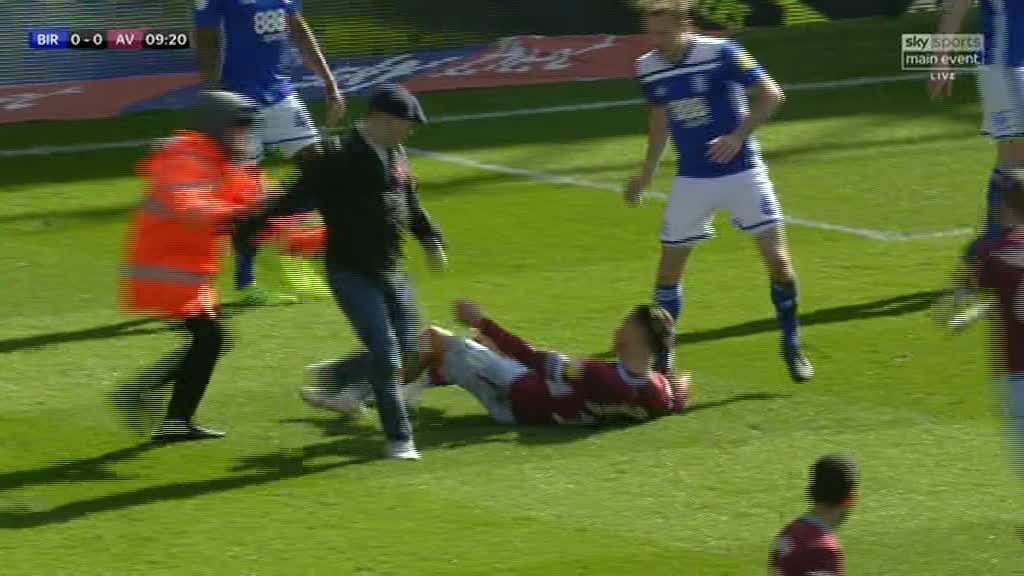 But one supporter took things totally too far, and is sure to have incurred a heavy penalty for the club he is supposed to support.

West Midlands Police have confirmed the man has been arrested.

They tweeted: "Following the incident on the pitch involving an attack on an Aston Villa player; a man has been arrested and en route to a custody block."

Fans have since taken to social media to praise Grealish for not reacting to being assaulted.

Some believe the footballer, who was a transfer target for Spurs last summer, should "sue" the attacker, while others are hoping he is "banned and jailed".

Former Manchester United and England footballer Gary Neville believes Birmingham will now be in big trouble thanks to the mindless actions of one individual.

He posted on Twitter: "The club are going have to take a huge punishment for this to act as a deterrent in the future.

"A points deduction or Empty stadium for 10 games!" 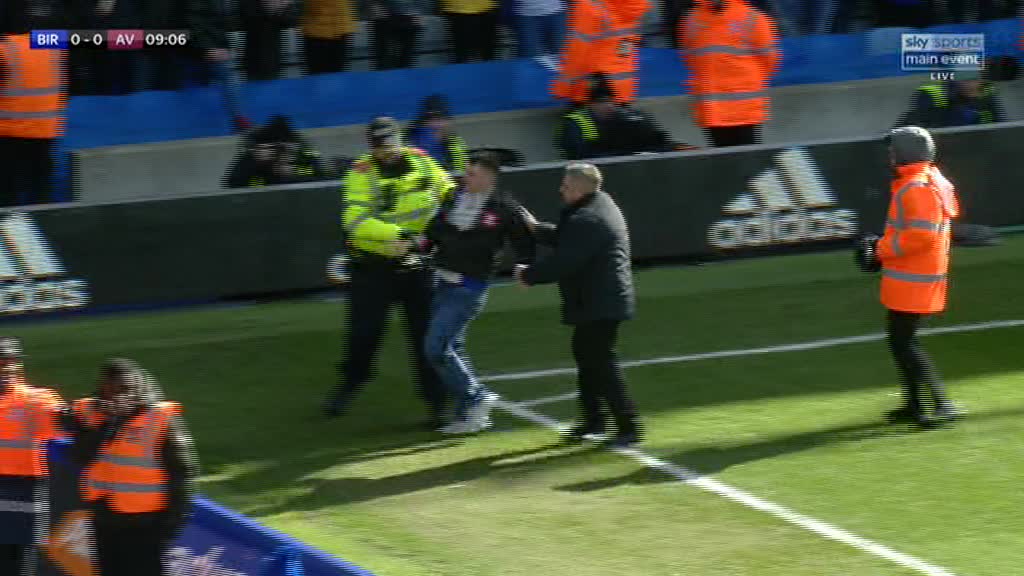 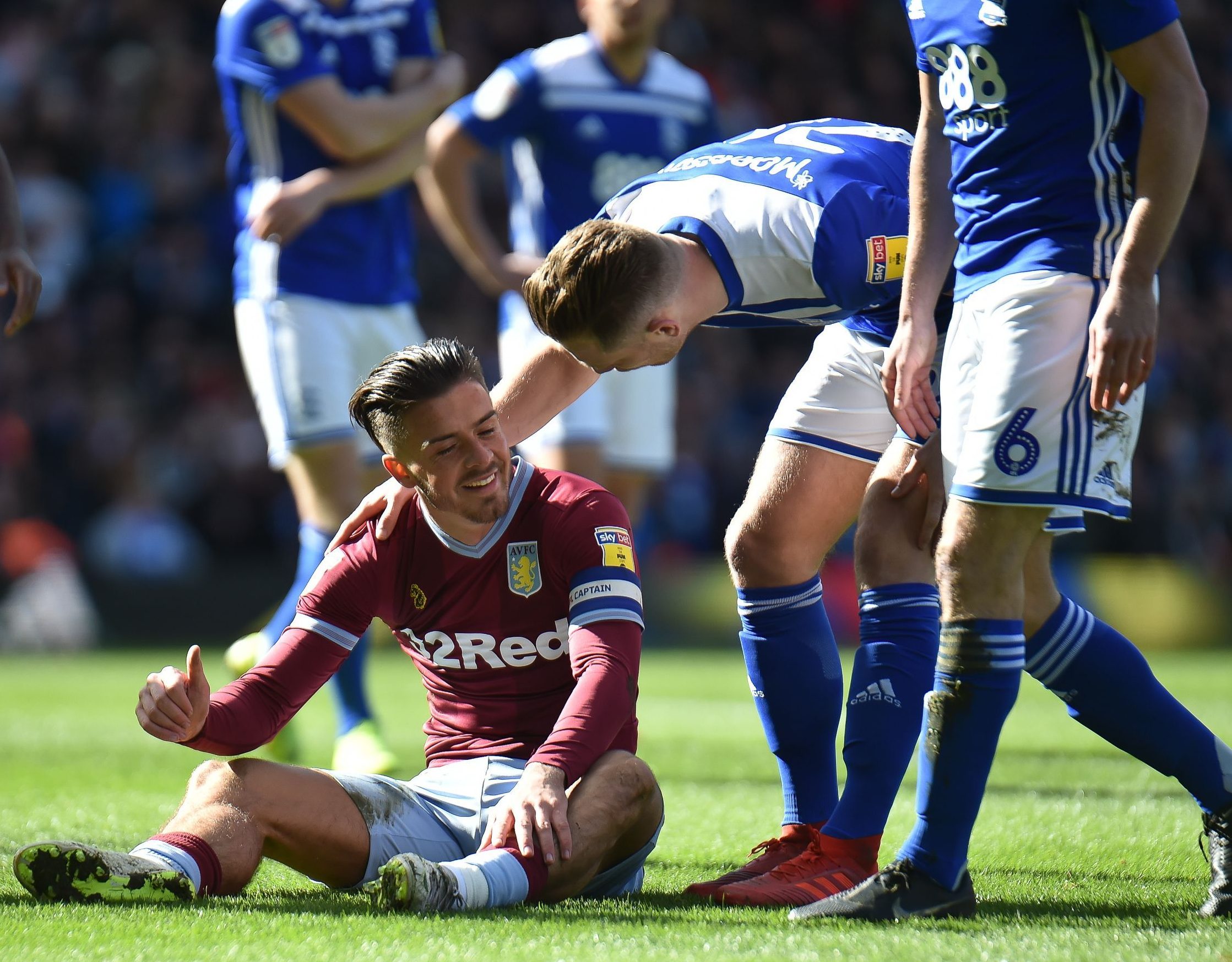 The EFL released a statement shortly after the incident.

It read: “The EFL condemns the mindless actions of the individual who encroached on to the pitch at St Andrews on Sunday afternoon.

“It’s a situation no player should ever be faced with.

“In all circumstances the playing surface is for players, not supporters and those playing in the game must be able to do so safe in the knowledge they will not be subjected to this type of behaviour.

“Whilst this incident falls within the remit of the Football Association, we will work with all the relevant parties to address the issue of player and match officials safety on the pitch and ensure the appropriate action is taken.” 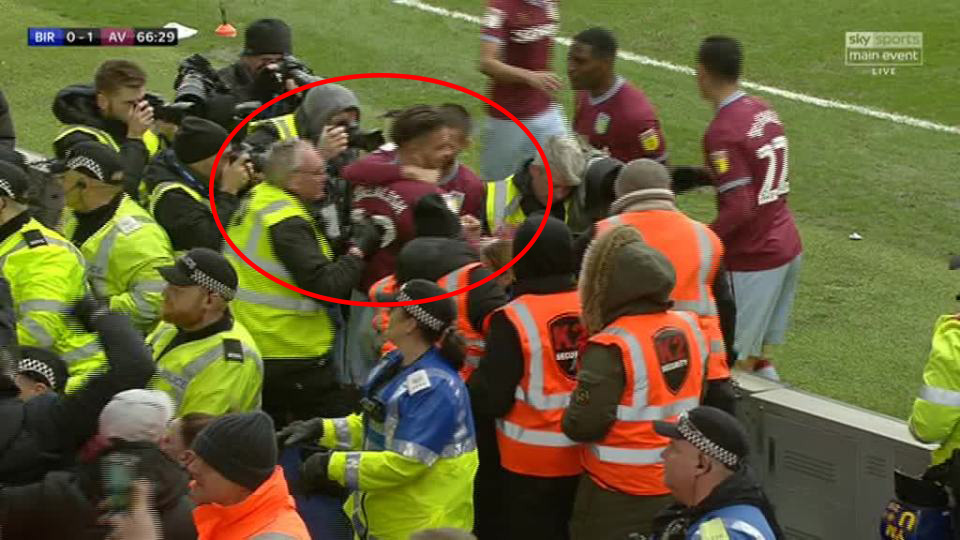 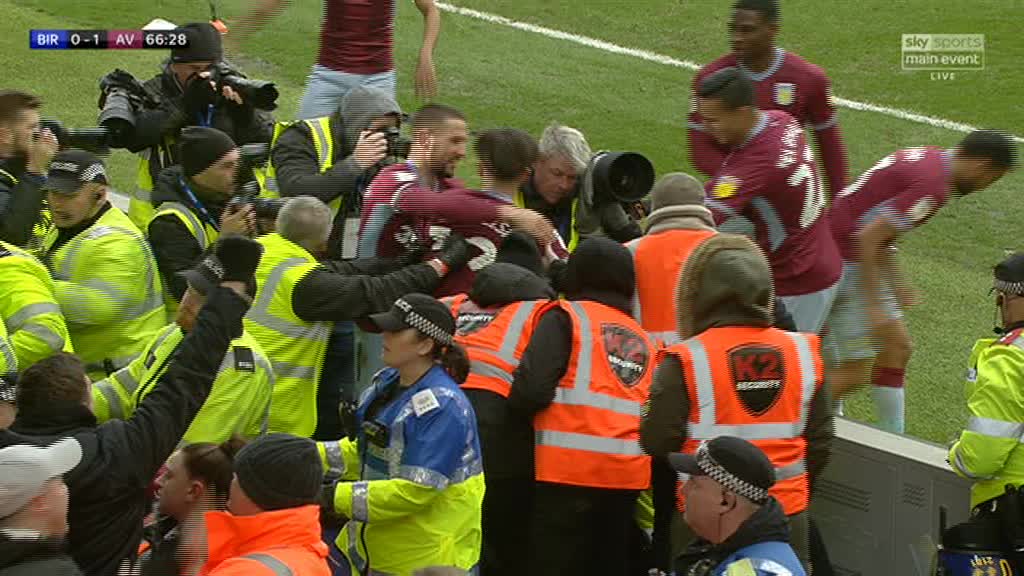 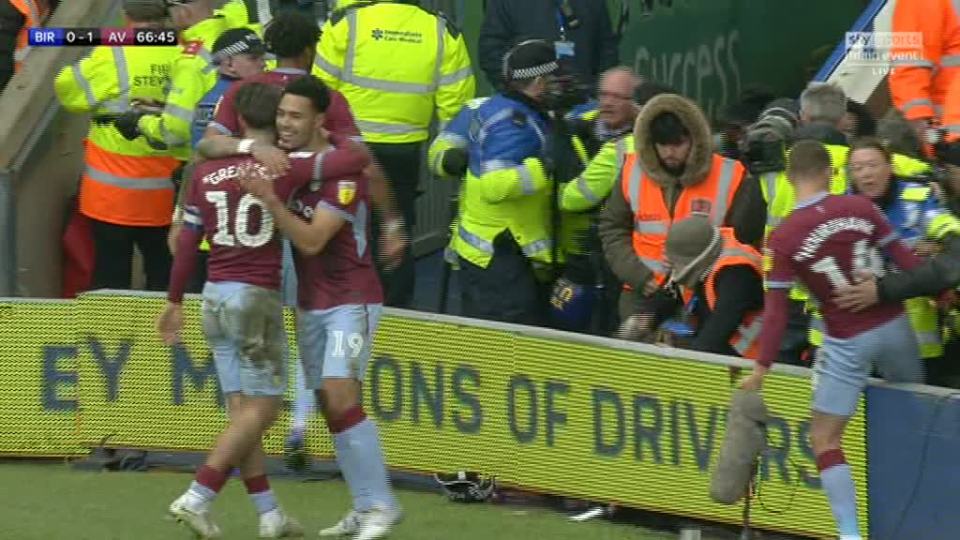 The match is renowned as being one of the most violent in British football.

Both clubs are followed by organised gangs of hooligans, and more than 400 police officers are on duty for the game.

In October 2017 there were 10 arrests at the infamous Clappergate clash at St Andrew’s, where hundreds of souvenir ‘clappers’ handed out by Birmingham City to their fans were thrown onto the pitch.

After the game Blues fans pelted police with bricks and bottles, prompting police to hold the Villa fans inside the stadium for 90 minutes as they attempted to clear the streets outside the ground. 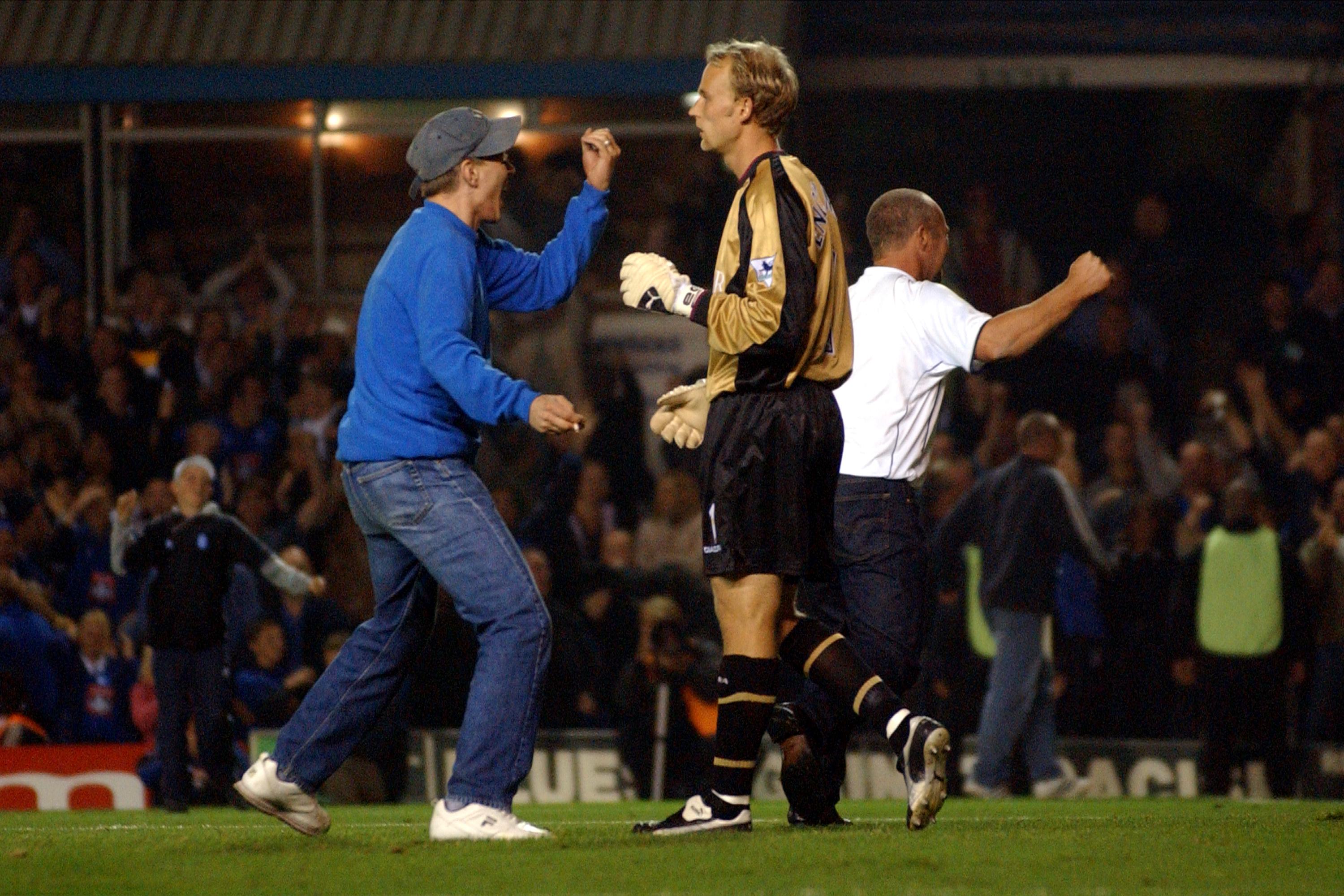 Violence flared at a pub near Villa Park in September 2015, leading to 28 fans being arrested.