India suffers world-record spike in coronavirus cases with 83,883: New infections continue to surge with a million in the space of two weeks

India announced a world-record 83,883 new coronavirus cases today with the outbreak poised to overtake Brazil as the second-largest in the world.

A million new infections in the space of two weeks have brought India’s total to more than 3.8million but many states are easing lockdown restrictions to ease the economic pain despite the contagion.

India’s death toll is also continuing to mount, with 1,043 new fatalities in the last 24 hours taking the total to more than 67,000. 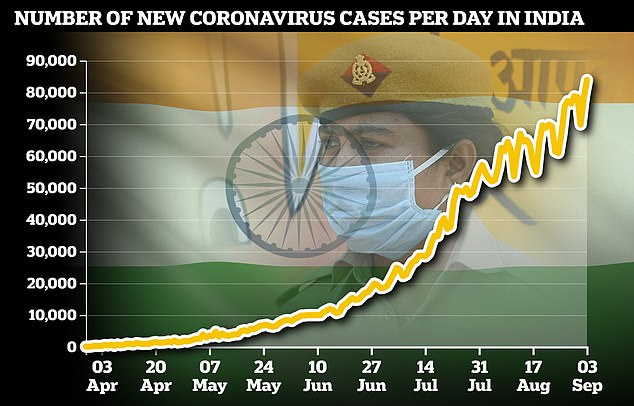 India’s coronavirus cases reached a new peak of 83,883 today – the highest one-day figure seen anywhere in the world so far 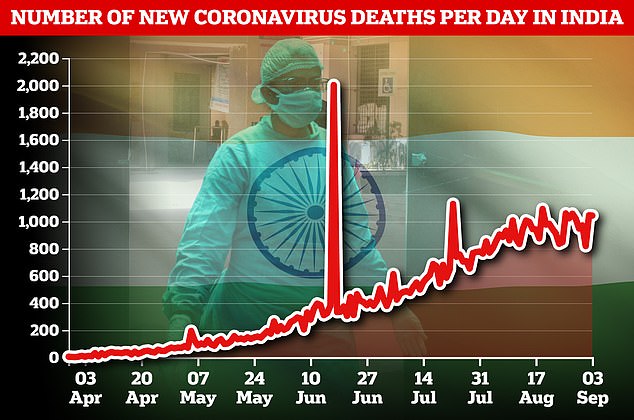 Several days have seen more than 1,000 deaths in India, which now has the third-highest death toll in the world after overtaking the UK and Mexico in recent weeks

India became the third country in the world to reach a million virus cases on July 17, after the United States in April and Brazil in June.

After that, India reached two million within three weeks, while the jump from two to three million took only 16 more days.

India’s total of 3,853,406 infections is now only narrowly behind Brazil’s caseload of 3,997,865, and cases are growing faster on the subcontinent.

More than 800,000 cases are currently considered ‘active’ in India and the worst-affected state, Maharashtra, has piled up more than 825,000 infections by itself.

India’s death toll is now the third-highest in the world at 67,376, having overtaken the UK and Mexico in recent weeks.

However, the fatality rate of 1.7 deaths per 100 people is lower than that in the US, Brazil or many European countries.

New surges are also being recorded in the country’s vast hinterlands, threatening to overwhelm their poorly-equipped healthcare systems.

However, authorities are also looking to re-open the economy after Monday’s announcement that GDP had contracted by 23.9 per cent from April to June. 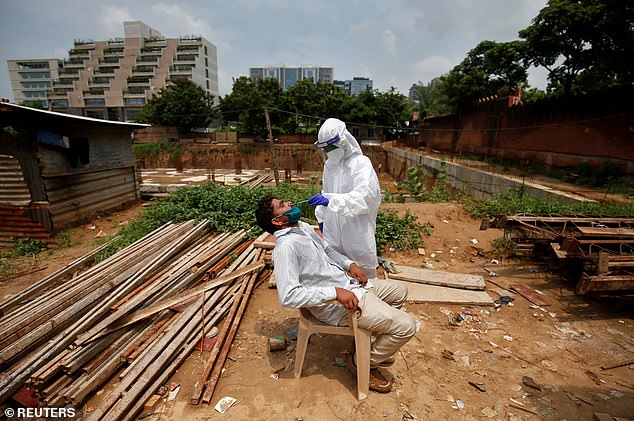 Unemployment is soaring with millions of people jobless, and the economic crash is the worst for at least 24 years.

As a result, India is gradually relaxing restrictions and has announced that urban metro trains can resume service from next Monday.

Up to 100 people will be allowed to congregate for events including religious and political functions later in September.

The state of Tamil Nadu says it will partially open public transport, allow shopping malls and places of worship to operate, abolish full shutdowns on Sundays and increase flights.

In Bengaluru, thousands of pubs were set to serve alcohol to customers starting from Tuesday following a nearly six-month gap, with 50 per cent seating capacity.

Some government decisions to reopen the economy and society have met sharp criticism.

On Tuesday, India held competitive college exams despite demands from students that they be postponed because of the pandemic.

Students and many opposition parties say they fear the exams will result in a surge in infections. The exams were earlier postponed twice. 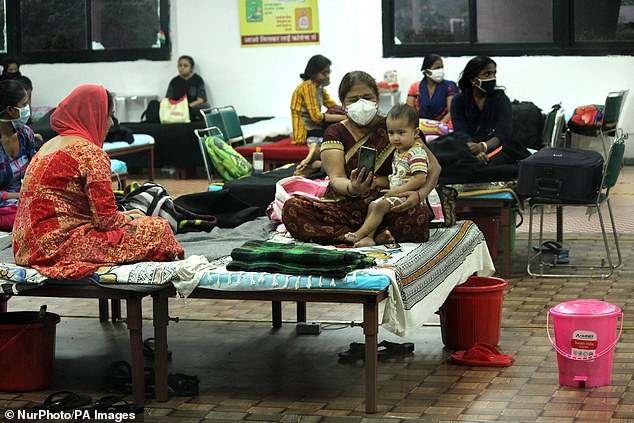 A ward for female Covid-19 patients inside the Commonwealth Games Village Sports Complex, which is attached to the Lok Nayak Jai Prakash Hospital in New Delhi

India announced a nationwide lockdown for 1.3billion people in March, which stalled the disease for a while before cases began to mount alarmingly in May and June.

‘This was to be expected,’ said Dr. Gagandeep Kang, an infectious diseases expert at the Christian Medical College at Vellore in southern India. ‘It was inevitable that the numbers would climb.’

Indian authorities have pointed to the recovery rate of virus patients, which is now more than 76 per cent, as evidence of the success of its policies.

‘A case becomes a case because you detected an infection. It doesn’t actually tell you about the disease,’ said Kang.

‘What we really need to be concerned about is the disease, whom is it affecting and how are we handling it.’

The virus has now spread even to remote areas such as the Andaman and Nicobar Islands, where members of a tribe tested positive last week.

Kumar Sanjay Krishna, the chief secretary of Assam, one of the worst-hit states, attributed the increasing cases to more testing, the opening of the economy and complacency.

‘People are not following precautionary steps and are violating the Covid protocols,’ he said on Twitter.