Iran has unveiled a new naval base in the Strait of Hormuz amid tensions with American forces in the region.

Senior Revolutionary Guards commanders opened the new base on Wednesday, saying it would help them project ‘dominance’ over the strategically important strait.

It comes after clashes between Iran and the US around the choke-point through which a fifth of the world’s daily oil supplies pass, which saw tankers attacked and a Navy drone shot out of the sky. 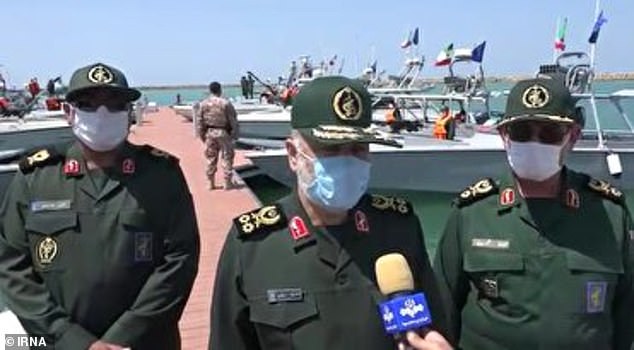 Iran has opened a new naval base in the strategically important Strait of Hormuz (pictured), saying it will help project ‘dominance’ in the region 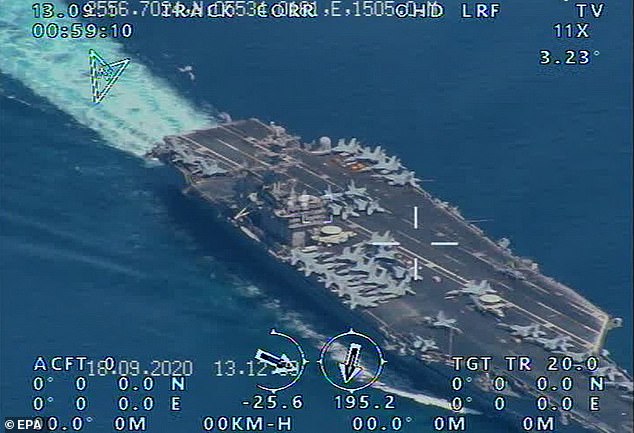 It comes amid tensions between the US and Iran in the region, and after the IRGC claimed to have successfully flown a drone over the USS Nimitz aircraft carrier in the Strait (pictured)

It also comes after the IRGC claimed to have flown a drone over the USS Nimitz aircraft carrier as it passed through the strait last week.

The semi-official Tasnim news agency published images of the Nimitz, saying they were taken by Iranian-made drones, in an apparent boast at Iran’s ability to get close to one of the US warships.

The US Navy’s Bahrain-based 5th Fleet, which oversees patrols across Mideast waters, declined to comment the Iranian report on Wednesday.

The ‘Martyr Seyed Majid Rahbar’ base lies in the southern province of Hormozgan, near the entrance to the strait, Iran said.

‘This base has been built with the purpose of total dominance over the entry and exit of extraterritorial aircraft and naval vessels’ at the entrance to the Gulf, Guards commander Major General Hossein Salami said on Wednesday.

‘This location is one of the country’s most strategic defensive points,’ he added, quoted by state TV’s website. 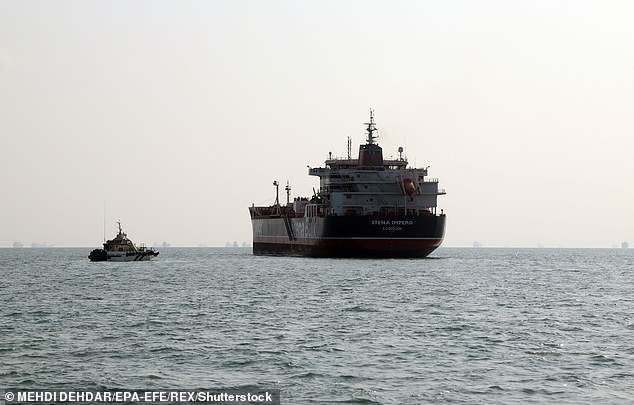 The Strait sees a fifth of the world’s oil pass through it each day, and was the site of clashes between Iran and western powers last year (pictured, British-flagged Stena Impero oil tanker which was stopped in the Strait by Iranian forces, then held hostage)

The Guards’ navy, which operates separately from the Iranian armed forces, ‘now has a very powerful naval base’ six years in the making, Salami said.

His remarks come days after a US aircraft carrier passed the waterway to enter the Gulf, amid Washington threats to enforce United Nations sanctions on Iran – a move other world powers have dismissed as legally void.

In June last year, Iran shot down a US Global Hawk drone over the strait after it allegedly violated the Islamic Republic’s airspace, a claim the US has denied.

The enemies have twice come to the brink of direct confrontation since then.

Washington has blamed Tehran for last year’s mysterious attacks against oil tankers in the nearby Gulf of Oman as well as an attack on Saudi oil facilities, with Iran denying all charges.