Irish lecturer stabbed to death in Paris had ‘insulted the Prophet Mohammed’, says his Pakistani killer

An Irish university lecturer stabbed to death by one of his former students had allegedly ‘insulted the Prophet Mohammed’, his killer has told French police.

The 66-year-old academic, named locally as John Dowling, was attacked and stabbed 13 times outside the Paris university where he worked on Wednesday.

Ali R., a 37-year-old Pakistani national, has confessed to the killing and told police he held a personal grudge against the teacher after failing his exams last year. 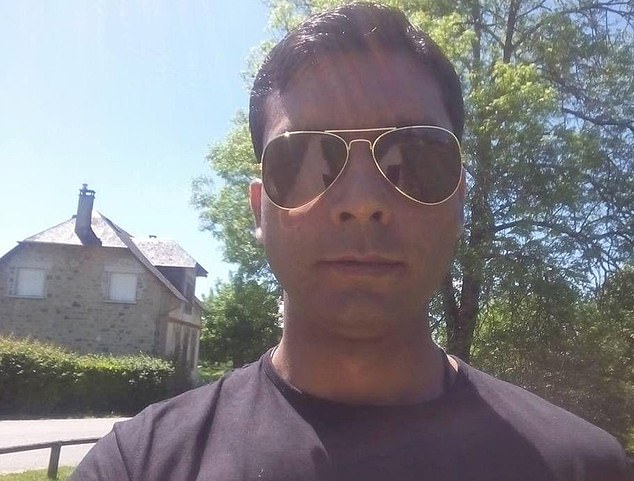 Arrested: Ali R. was arrested at the scene after stabbing Irish university lecturer John Dowling, 66, to death outside the Leonardo de Vinci university in Paris

Ali – whose surname has not been disclosed by the French authorities – is due to be indicted for murder in Paris today for the attack outside the Leonardo de Vinci private university in La Defense business district.

Catherine Denis, the Nanterre prosecutor involved in the case, said Ali harboured an ‘obsessive resentment’ against the university for kicking him out in September 2017.

‘He came to France two years ago to join the management school, but did not pass his first year,’ she said.

‘Since then he had been returning to the college, and had become unwanted to the point that he was not allowed in any more.’

CCTV footage shows Mr Dowling chatting calmly with Ali at around midday, before the attacker took out a steak knife and plunged it into the Irishman’s throat, and then into his chest. 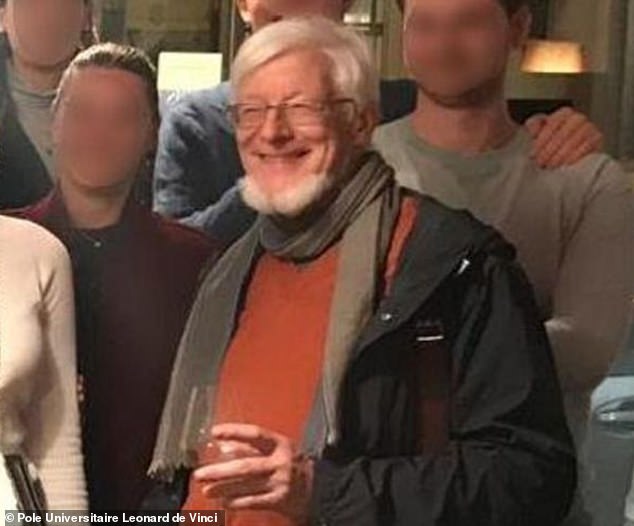 Ali R claimed that Mr Dowling, who had taught English and international relations at the university for two decades, had insulted Islam.

Ali has told police that the teacher had made fun of his Muslim religion during English classes at the university.

‘He produced a drawing, which he showed off in class, insulting the Prophet Mohammed,’ Ali said, according to Ms Denis.

Despite this claim, Ms Denis said ‘nobody remembers such an incident. ‘We don’t have proof of radicalization, but rather a feeling that we’re dealing with someone who is very religious, very pious, very practicing.’

Insulting the Prophet Mohammed is one of the gravest insults to Islam, and has directly led to terrorist atrocities in France.

In January 2015, two gunmen linked to Al-Qaeda murdered 12 people at the Paris offices of the satirical magazine Charlie Hebdo, after it published insulting cartoons of the Prophet.

Ms Denis said Ali R. was not known to the intelligence services, but was an ‘obsessive patriot’ from the Islamic Republic of Pakistan. 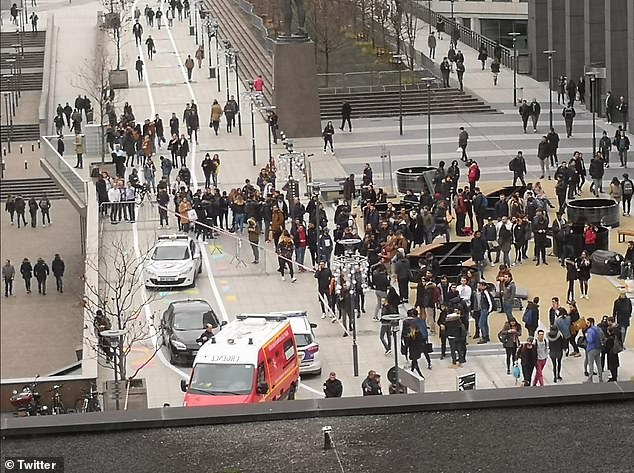 He had just renewed his residency permit to stay in France, and had bought the steak knife from a supermarket close to the university.

There are indications that he may have arranged to meet his victim, and police are combing through telephone and email records to try and establish a link.

He has confirmed that he enrolled in a bachelor’s management course for foreigners at De Vinci in September 2016, but was forced to leave in August 2017 after failing his exams.

Mr Dowling had taught English and international relations at the university for two decades, and had made numerous friends there, including plenty of overseas students.

La Defense – a concrete and glass suburb which contains the head offices of some of the biggest banks and businesses in France – has been a target for Islamic State terrorists since at least 2014.

Despite this, detectives have so far ruled out any links between the attacker and jihadi groups.

On Friday, tributes continued to pour in for Mr Dowling, who had been due to retire at the end of this academic year.

There was a minute’s silence outside the university on Thursday, before the Irish national anthem was played and a crowd gathered around a green-white-and-orange Tricolour.

Pascal Brouaye, head of the college, said: ‘Since yesterday, messages of friendship have overwhelmed us like a tsunami.

‘It shows how much John was appreciated by students and graduates. The minute’s silence was intense and it was followed by beautiful music, played on the piano by a student of the school.’