Jerusalem: This is the third time this year that police have urged that Israel's Prime Minister Benjamin Netanyahu face criminal prosecution.

The latest recommendation is that Netanyahu be indicted on bribery, fraud and other charges, accusing him of trading regulatory favours for fawning news coverage, in what is potentially the most damaging of a series of corruption cases against him.

It deals another blow to his teetering governing coalition, which narrowly averted collapse last month and is clinging to a one-vote majority in Parliament while edging closer to calling early elections. 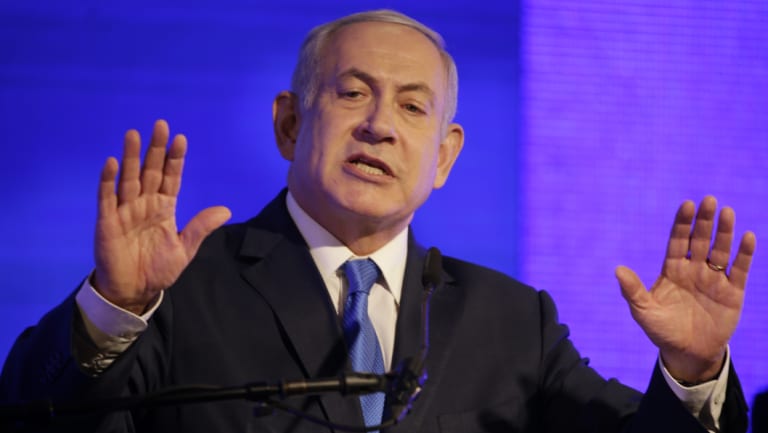 In the other cases, he is accused in the first of accepting hundreds of thousands of dollars in gifts in exchange for political favours, and in the second of trading influence for favourable coverage in a leading Israeli newspaper.

Netanyahu, a close ally of President Donald Trump's, called the recommendations in the latest case unsurprising because of previously published leaks, and repeated his contention in the previous cases that they would come to nothing.

"The witch hunt against us continues," he told a gathering of activists from his Likud party.

Noting that Sunday was the first night of the Jewish holiday of Hanukkah, he said, "We're celebrating the victory of light over darkness," adding that the light will always win out.

"A true Hanukkah miracle," he said. "What a beautiful present they gave us for the holiday."

Still, this latest blow to Netanyahu threatened to subvert his efforts to consolidate power and burnish his image as Israel's security czar and the country's indispensable, irreplaceable leader. If he remains in office next summer, he would overtake David Ben-Gurion, Israel's founding leader, as the country's longest serving prime minister. 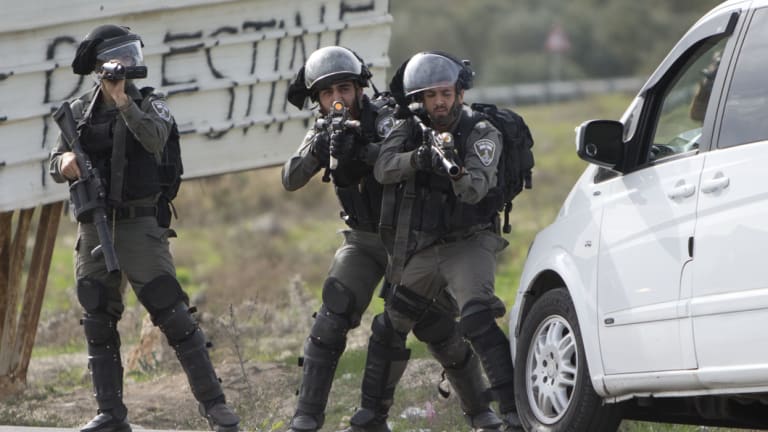 Israeli security forces take position during clashes with Palestinians after a demonstration against the arrest of members of Fatah in Jerusalem by the Israeli authorities, at Hawara checkpoint near the West Bank city of Nablus, on Sunday.Credit:AP

After his defence minister resigned last month over the government's handling of the simmering conflict with the Palestinian territory of Gaza, Netanyahu deftly won a power struggle with some members of his coalition. He appealed directly to the public in a televised address, warning that any attempt to topple the government at such a complex time for national security would be irresponsible.

In the new case against him, Netanyahu is not accused of getting rich himself, but of enriching the country's biggest telecommunications company, Bezeq, at the public's expense and for the sake of his own image and that of his wife and family.

Between 2012 and 2017, Netanyahu "intervened in a blatant and ongoing manner, and sometimes even daily," in coverage at Walla, a news website owned by Bezeq, police said. This ensured "flattering articles and pictures" were published and critical content about him and his family was removed. 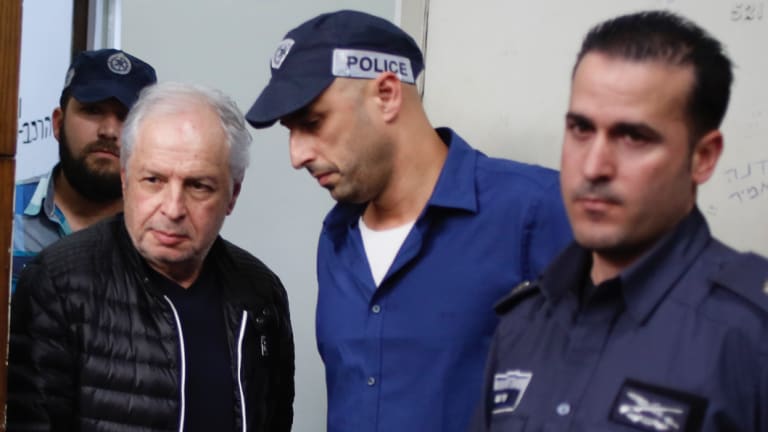 Bezeq telecom company’s controlling shareholder Shaul Elovitch arrives at the magistrate court in Tel Aviv, Israel, in February, 2018. Elovitch is suspected of involvement in a scandal in which Israeli Prime Minister Benjamin Netanyahu promoted regulation worth hundreds of millions of dollars for Bezeq in exchange for favourable coverage in the Bezeq owned Walla News site.Credit:AP

Police said Netanyahu and his associates sought to sway Walla's hiring of senior editors and reporters. In return, Netanyahu, who personally oversaw the communications ministry from 2014 to 2017, rewarded Bezeq with enormously lucrative concessions, police said. Those included approval of its merger with Yes, a satellite television company, despite the objections of lower-level ministry officials.

Police said they had seized about $US32 million from those involved during the investigation.

Tzipi Livni, the leader of the opposition in the Israeli Parliament and a former justice minister, called for immediate elections to replace Netanyahu.

"Bribery!" she wrote on Twitter. "Netanyahu has to go before he destroys the law enforcement authorities in order to save his own skin." 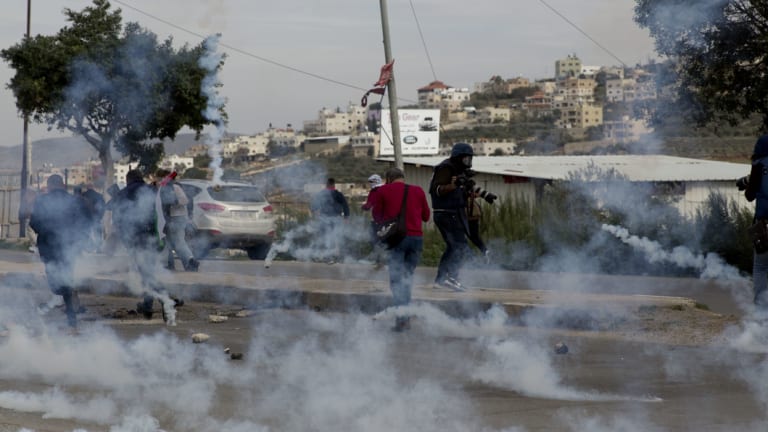 Palestinian demonstrators run from tear gas fired by Israeli troops during clashes after a demonstration at Hawara checkpoint near the West Bank city of Nablus, on Sunday.Credit:AP

Avi Gabbay, the leader of the centre-left Labor Party and a former chief executive of Bezeq from 2007 to 2013, called on Netanyahu to resign.

"A prime minister with so many corruption scandals surrounding him cannot continue," he said in a video. "A man motivated by such a sick obsession about what the media will say about him cannot lead Israel."

But experts said a prime minister need not necessarily resign even if formally charged.

Abraham Diskin, professor emeritus of political science at the Hebrew University of Jerusalem, said the police recommendations were unlikely to change many minds: Netanyahu's detractors would be satisfied, while his supporters would see further proof that he is being persecuted.

Diskin, echoing the prime minister, suggested that the police and news media were teaming up to blow the accusations out of proportion.

"Which politician does not try to sway the media?" Diskin said, adding that the allegations still had to be proved in a court of law.

The case was complex, involving a host of other suspects and dozens of witnesses. Besides Netanyahu, police recommended Sunday that his wife, Sara, be charged with bribery, fraud and breach of trust, along with disruption of investigative and judicial proceedings.

Police also urged the indictment of others on a variety of charges, including Shaul Elovitch, the controlling shareholder of Bezeq; his wife, Iris; their son, Or, an aide to his father and board member in some of their holdings; Stella Handler, chief executive of Bezeq; Amikam Shorer, a senior Bezeq officer; and Zeev Rubinstein, a businessman close to the Elovitch and Netanyahu families who is deputy chairman of the Israel Bonds corporation.

Benjamin Netanyahu was already facing likely indictment in two other scandals. One case alleges that he accepted gifts worth hundreds of thousands of dollars in exchange for potentially valuable political favours. Another involves an accusation that he negotiated with the publisher of Yediot Ahronot, a leading newspaper, for favourable coverage in exchange for using his influence to curtail a rival paper, Israel Hayom. In that case, the alleged deal never came to fruition. 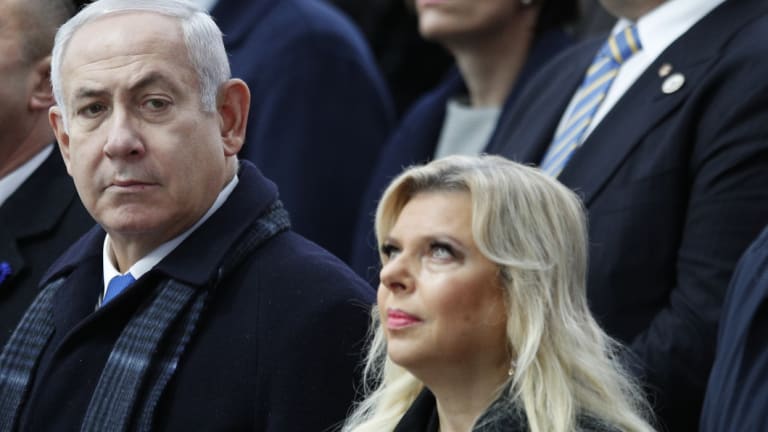 The attorney general, Avichai Mandelblit, once considered a Netanyahu loyalist, has indicated he was waiting for the completion of the investigation of the Bezeq case before making a decision on all three cases at once.

An indictment could come only after Netanyahu is given a chance to argue against it at a hearing.

Sara Netanyahu is already on trial on fraud and breach of trust charges over allegations that she improperly spent about $US100,000 of public funds, hiring celebrity chefs to cater private meals while covering up the fact that the prime minister's residence already employed a full-time cook.

In his response to the new police recommendations on Sunday, Benjamin Netanyahu faulted what he called "the transparent timing of their publication." Indeed, the announcement was something of a parting shot for Chief Roni Alsheich, whose term ends Monday and whom Netanyahu has frequently attacked over the corruption investigations.