‘I will sort this’: The moment a brave jewellery shop owner uses a ladder to protect his employees from a violent robber who broke his nose in vicious attack

A jewellery shop owner was caught on camera using a set of metal stepladders to protect his employees from a violent robber.

Craig Carruthers had been in his store in Carlisle, Cumbria, alongside both customers and members of staff earlier this year.

In the footage, Burtak, dressed in a grey hoodie and carrying a holdall, can be seen throwing punches at the owner, having vaulted the counter.

He frantically pushes Mr Carruthers to the ground before turning his attention to the stock in the window display.

But Mr Carruthers, who is dazed and has suffered a broken nose, then gets to his feet. 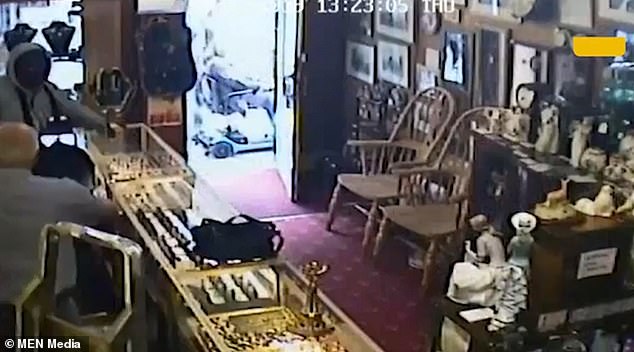 Craig Carruthers had been in the store in Carlisle, Cumbria, when career criminal Daniel Burtak vaulted the counter and began raiding the shop 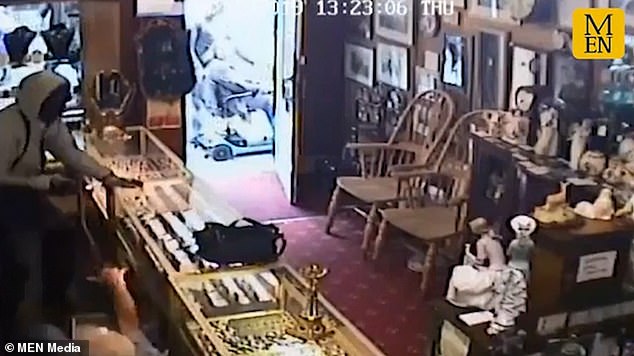 Burtak, dressed in a grey hoodie and carrying a holdall, grappled with the owner before frantically pushing Mr Carruthers to the ground. He then turned his attention to the stock in the window display

A second figure, dressed in all black, runs in through the shop’s front door and appears to gesture to Burtak to hurry.

In the meantime, Mr Carruthers looks down and picks up a metal stepladder that is resting on the floor, that had been knocked over in the previous scuffle.

He grabs the ladder with both hands and strides toward the thief before jabbing him with it.

The confronted robber then makes a bolt for the door with £25,000 worth of goods in his bag as Mr Carruthers launches the ladder in his direction.

The video ends shortly after. 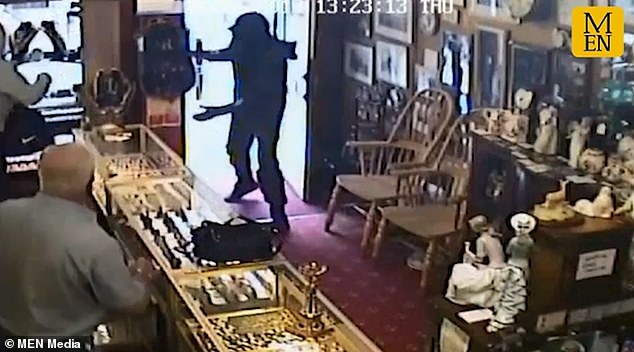 A second figure, dressed in all black, runs in through the shop’s front door and appears to gestures to Burtak to hurry 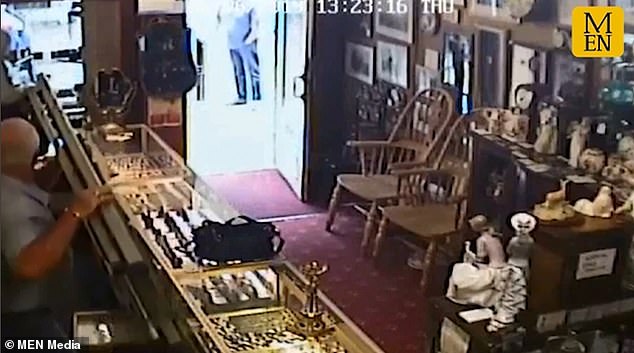 In the meantime, Mr Carruthers looks down and picks up a metal stepladder that is resting on the floor, that had been knocked over in the previous scuffle

Despite there being no audio on the clip, when the robbers first made their entrance, Mr Carruthers had shepherded one female employee out of the firing line and said: ‘I will sort this.’

The robbers fled in a Ford Fiesta that had been stolen by Burtak earlier that day in Lancashire before he drove it over 100 miles to the jewellery shop in convoy with an Audi A3 that was being driven by a friend.

Both vehicles had been fitted with false number plates and had been seen driving around the city centre minutes before the crime in what Carlisle Crown Court heard was a ‘reconnaissance’ mission. 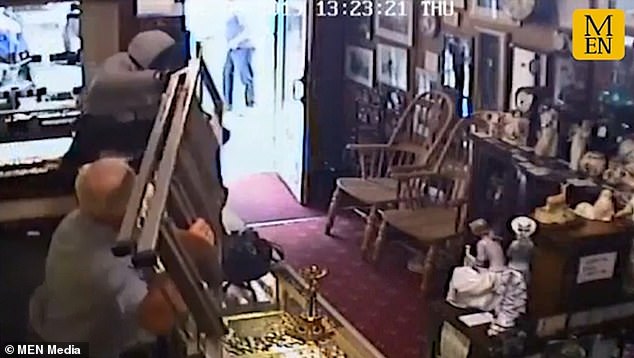 The shop owner strides toward the thief before jabbing at him as he makes a bolt for the door with £25,000 worth of goods in his bag 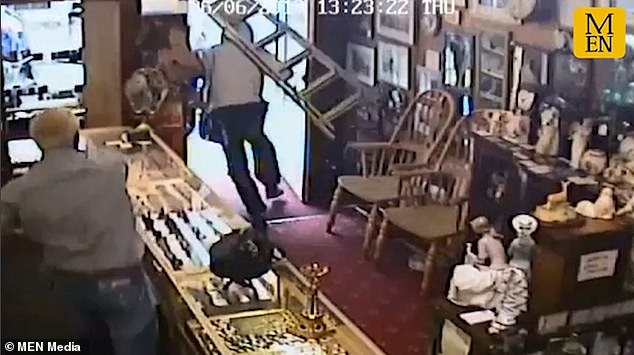 Prosecutor Antony Longworth said ‘this was clearly a professionally planned commercial robbery,’ in what was the second attack on the store in just a few months.

Burtak and his friend were arrested while travelling south in the Audi on the M6 later that afternoon.

Burtak, 32, from Bolton, was unanimously convicted of robbery following a trail by jury and was jailed for eight years.

Ashley Entwistle, 36, also from Bolton, had travelled to Carlisle in the Audi but had denied the robbery charge he jointly faced and was later acquitted. 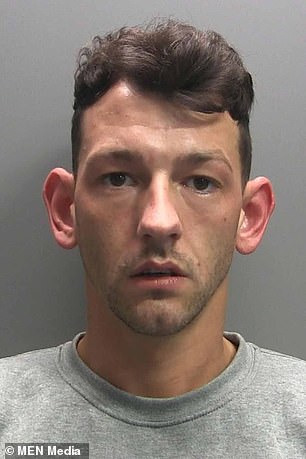 Daniel Burtak, 32, (pictured) was convicted of robbery and jailed for eight years

Speaking about the event during the trial, Mr Carruthers recalled: ‘[Burtak] came towards me and I kicked out. He kicked me back and I looked at his hands.

‘I looked at his hands to see if he had a weapon due to (the incident) previous. I just saw gloves and then I was hit.’

Mr Carruthers was floored by what he described as ‘intense’ force which ‘felt like a knuckleduster’.

He added: ‘I thought “he is not getting any more of my stock”,’ he told the jury.

Most of the jewellery haul was recovered but the effect on Mr Carruthers and his staff was immense with two employees since leaving the store.

Mr Carruthers said: ‘Both have told me that they cannot continue to work here due to the robberies.

‘They do not feel safe at work and kept having nightmares about what happened.’

Burtak had also been jailed in 2007 for his role in an armed smash-and-grab robbery of a Bolton jewellery store and sentenced again in 2016 for helping to burgle a food wholesaler in Penrith.

Andrew Scott, defending, said father-of-two Burtak’s partner had recently given birth to a baby he hadn’t yet seen.

He added: ‘He will soon be 33. He has got a terrible record. It is 20 years of offending. It has been extensive.

‘Hopefully this particular sentence and the present situation that he finds himself in will help him in changing his ways.’

But Judge Julie Clemitson concluded during sentencing that it was he who attacked Mr Carruthers and stole his stock.

She added: ‘The robbery, I am sure, must have been terrifying for those involved.

‘The impact that the offence has had on all of the people involved that day has been significant.’