Hong Kong: The pillars of Hong Kong’s establishment – business, the judiciary and the civil service – appear to be pushing back against Beijing’s insistence that Hong Kong chief executive Carrie Lam take a harsh line against democracy protesters.

As police continue cracking down on dissent, including the daily use of tear gas, the Court of Appeal released on bail Benny Tai, a leader of the 2014 Occupy movement. 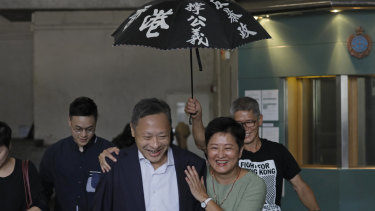 Protests are organised on social media and a public forum called LIHKG, with action taken on the most popular suggestions. But violent scenes at Hong Kong’s international airport on Tuesday, where two mainland Chinese men including a journalist were beaten on suspicion of being spies, highlighted the perils of actions directed in this way.

It led to fears that the movement might lose popular and institutional support, and on Wednesday protesters made a decision in an online vote to apologise to the public for their behaviour at the airport.

The release of Tai from jail has raised hopes that an experienced, calmer voice may also assist in curbing protester violence.

Tai said he would not comment on the violence until he had time to understand the situation.

“With so many Hong Kong people who love Hong Kong so much, even though the road ahead is very unclear and will be very difficult and tough, I still have confidence that the future of Hong Kong must be bright. The golden era of Hong Kong is yet to come,” Tai said.

Beijing labelled Tai a national security risk before his jailing, and his release on bail until his appeal can be heard next February is likely to infuriate the Chinese propaganda machine, which has been trying to cast protesters as akin to terrorists.

Hong Kong television stations have aired fresh footage of military trucks and hundreds of Peoples Armed Police inside a stadium in Shenzhen a few kilometres from Hong Kong’s border. 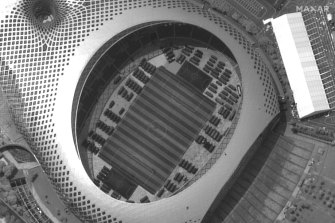 However, a letter from 350 executive officers in the Hong Kong civil service on Thursday asked for Carrie Lam to respond to the protesters, and rejected her comment they had no stake in society.

In the wake of the Hong Kong airport disruption that saw hundreds of flights cancelled as protesters occupied terminals, the peak Australian business group in Hong Kong, AustCham, also called for the government to respond to protesters' key demands.

“AustCham Hong Kong urges the Hong Kong government to formally withdraw the extradition bill, and supports calls for the appointment of an Independent Commission of Inquiry into the recent unrest, as a first step towards reconciling difference,” the statement said.

“Each day that this impasse continues, the risks and costs to both the government and people of Hong Kong increase. The chamber hopes that meaningful communications between the government and the wider community can be conducted in a way that recognises and addresses the concerns of all parties, focuses on peaceful resolution, and respects Hong Kong’s unique position.”

A prominent pro-Beijing Legislative Council member, Priscilla Leung, who represents business and professional groups in the parliament, called for mediators to step in.

“Don’t wait for our government … I am also pissed off with this kind of waiting attitude,” she said in comments carried by Radio Television Hong Kong and confirmed with her office by The Sydney Morning Herald and The Age.

Tai was released by the vice-president of the appeal court, Justice Andrew Macrae, on $100,000 bail because his 16-month sentence would have been served before an appeal against two public nuisance convictions could be heard next February. The District Court judge who jailed him in April had said the sentence was imposed because Tai expressed no regret.

A security net has descended on Hong Kong airport with squads of police patrolling past check-in counters and access to the terminals restricted to passengers who could show an air ticket. Flights resumed at one of the world’s biggest air travel hubs on Wednesday.