The tyres hit the tarmac of Bangkok's Don Mueang airport. The prince steps out in his army uniform. It has been a long flight from Perth, where he has been training with the SASR for months since completing four years at Duntroon, but his day is not over yet. The 24-year-old is off to temple on a political errand.

Crown Prince Maha Vajiralongkorn meets a saffron-robed figure, a monk who for 10 years was Thailand’s military dictator before being ousted. The sanctuary in the temple is a signal of royal support, and the meeting is a pointed one as political protests grow at the university campus nearby. It does nothing to quell the anger. It is October 2, 1976. Four days later the campus is the site of a massacre that haunts Thailand to this day. 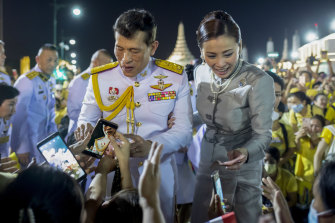 When King Vajiralongkorn flew in to Bangkok from Germany on October 9, 2020, he landed in a similar political storm. For all the social and economic changes over the decades, young protesters are similarly angry at the military’s dominance and thwarted democracy.

It is also personal: the King’s life in Germany, the women in his life and use of taxpayer money are all the target of criticism, satire and outrage. Yellow-clad supporters counter that the nation, religion and monarchy are core to the Thai identity.

Exiled academic and royal critic Pavin Chachavalpongpun says it is as if “somehow politics got stuck”.

“Almost everything, if you just close your eyes it seems like we go back to 1976,” Pavin says from Kyoto. “The source of the problem has remained with the monarchy, and in particular with the same figure [Vajiralongkorn]. And with the kind of tactics, building up vigilante groups, supporting hardcore royalists to come out, using both propaganda and violence to intimidate the pro-democracy movement.

“This is amazing that we have changed very little from that point to now.” 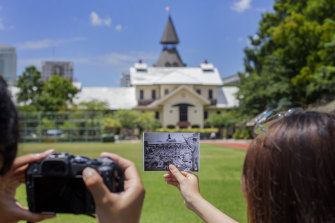 The massacre at Thammasat University on October 6, 1976, has been in focus as Thai protesters are asking questions about their history.Credit:AP

Vajiralongkorn was an important, if perhaps unwitting, figure in 1976. Actors in a student play were accused of staging a mock execution of the then crown prince and on October 6 a coalition of right-wing militia and police launched a pre-dawn assault on Thammasat University. Forty-three were killed, including five who were lynched. No one has been held accountable. The army seized power in the name of defending the monarchy.

In the past month, protest leaders have been arrested multiple times, flash mobs have sprouted across Bangkok and tear-gas and water cannon have been deployed. Riot police have been out in force but unable to stop protest tactics adopted from last year’s demonstrations in Hong Kong. The words “republic of Thailand” have appeared at protest sites and populate segments of Thai social media with alacrity.

The three official aims of the self-styled People’s Party, or Khana Ratsadon, are the resignation of Prime Minister Prayut Chan-o-cha, a rewrite of the military-backed constitution and reform of the monarchy. The royal reforms they want include greater transparency and accountability, and to rein in the use of taxpayer funds at a time when Thailand’s tourism-dependent economy has been hammered. The issue of the monarchy is the most contentious and has brought issues that have long been suppressed by harsh laws and media self-censorship to the fore.

The tensest moment came after a Rolls-Royce carrying the King’s youngest son, Prince Dipangkorn, and Queen Suthida strayed into a protest zone on October 14. British foreign correspondent Jonathan Miller described it on Channel 4 as a “major security lapse”. The more suspicious saw it as a ruse to turn public opinion against the young demonstrators.

Through it all, Vajiralongkorn has stayed in the spotlight. He has lived mostly in Germany since 2007 and had the constitution rewritten to make it easier for him to rule from abroad, but has postponed his return to Europe. Germany’s Foreign Minister Heiko Maas made pointed comments about Vajiralongkorn being unable to rule from Bavaria, which has complicated matters. “I think the King is wise to not go back now because at least they want the story to fade away,” Pavin says.

Vajiralongkorn has also been greeting supporters. Together with Queen Suthida, his Noble Consort Sineenat and his two daughters, the King has walked among them, posed for selfies and offered moral support. At one such event last Sunday, Channel 4’s Miller stood behind a staunch royalist former monk and scored a scoop. He asked the King what he would say to the protesters. 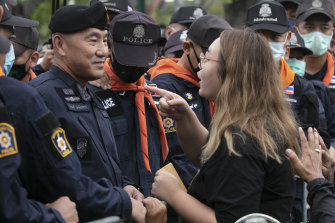 Protest leader Panusaya Sithijirawattanakul, confronting police on September 20, has been charged with sedition.Credit:AP

“Himself, two wives and his two active daughters are totally in sync, this is not coincidental,” Pavin says. “They have to defend the monarchy, that I understand, but if you read closely whatever these people say to the loyal subjects is the same thing. This has been calculated.”

As far as compromise goes, Pavin believes the King “did not mean what he said”. Talk of replacing the Prime Minister has been circling – there is often talk of a coup in Thailand, where there have been a dozen successful putsches in the past century.

Pavin says the fate of the Prime Minister could be a bargaining chip for the King, giving the protesters a victory. But it was more likely the monarchy and military wanted to exhaust protest leaders and outlast the movement.

“This is a tactic that the King has been adopting for some time now. I think eventually they just hope that the persistence on the part of the palace and the government would eventually win, meaning that as long as they can hold on to the status quo then they would emerge as the winner.”