Armed police shot a man dead after a suspected terrorist attack sent hundreds of people running for their lives in the heart of London.

This is what we know so far:

– Police were called at 1.58pm on Friday to a stabbing on a premises near London Bridge. 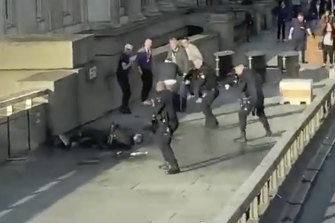 The suspect is surrounded by police on London Bridge.Credit:@HLOBlog via AP

– A video posted on Twitter shows about half a dozen men wrestling with someone on the ground on the bridge's pavement. One of them backs away from the scene carrying a knife.

– Officers shot dead the suspect and a number of other people had been stabbed; Sky News reported another person had been killed. No further details have been released.

– The attack has been declared a terrorism incident.

– The suspect was carrying a hoax bomb device and officers set up a cordon that would remain in place while they made sure there was no other threat to public safety.

– London's ambulance service declared a "major incident" in the area and London Bridge station was closed.

– Prime Minister Boris Johnson said he was returning to his office and being kept informed of developments.

– In June 2017, three attackers rammed a van into pedestrians at London Bridge, stabbing people in nearby bars. Eight people were killed and at least 48 injured. Islamic State said its militants were responsible.