Oldest Pearl Harbor veteran to have post office named after him

A California post office will be named after Ray Chavez, who was the oldest military veteran to survive Japan’s 1941 attack on U.S. forces in Pearl Harbor, Hawaii, when he died in 2018.

Two years after his death, the Navy veteran who became the oldest survivor of the Japanese attack on Pearl Harbor will have a post office named in his honor.

Chavez was the last living survivor of the surprise attack that catapulted America into World War II when he died in 2018. He was 106.

He joined the Navy in 1938 and was aboard the USS Condor, a minesweeper, before Japan attacked the Pearl Harbor on Dec. 7, 1941, the outlet reported.

Before dawn that day, the Condor crew spotted a Japanese submarine two miles from the harbor and summoned a destroyer to attack it, but it was considered an isolated incident. The massive enemy air attack soon followed.

FOR MORE THAN 7 DECADES, US SOLDIERS SERVE AS 'FATHER CHRISTMAS' FOR PERILED ORPHANS IN JAPAN

Chavez grew up in San Diego and worked as a groundskeeper at the University of California, San Diego after the war. He later started a landscaping business in Poway. 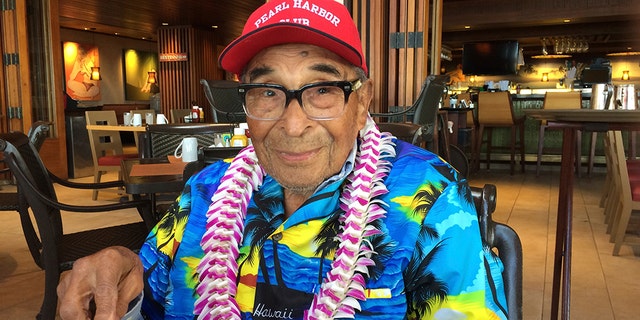 Before his death, Chavez visited the White House to meet Trump. Afterward, the president called him an "inspiration to all who are here today and all of our great country," according to NBC.

After Chavez’s death, Trump said, "His legacy is forever etched into our country’s rich history."

Chavez always felt a close connection to Pearl Harbor and his fellow service members, even decades after the war.

"I still feel a loss," the veteran said during a 2016 ceremony on the attack’s 75th anniversary, according to The Hill.

"We were all together. We were friends and brothers. I feel close to all of them."

Last year, Kathleen Chavez, Chavez’s daughter and a fellow Navy veteran, said her father would feel humbled to have a post office named after him.

"I think he’s probably looking down from heaven right now and saying, ‘I don’t know what they’re making such a big deal about.’ He was always so humble about his service in World War II and would probably say, ‘I was just doing my job like everyone else,'" she told the San Diego Union-Tribune.

"But also I think he’d be very pleased and I think he deserves it."

This article first appeared in the New York Post.