New York: In a speech he could only have delivered remotely as a trip to New York could have meant arrest, Venezuelan President Nicolas Maduro told the United Nations General Assembly on Thursday (AEST) that all "countries that defend peace" should rally against US sanctions clamped on the South American country and its allies like Cuba, Nicaragua and Syria.

Even though he has UN diplomatic immunity, Maduro would be taking a risk by travelling to the US where there is a $US15 million ($21 million) bounty for information leading to his arrest. The socialist leader is not recognised as a head of state by the US. He skipped last year's assembly, but this year's COVID-induced virtual meetings, afforded him a spot on the speakers' list. 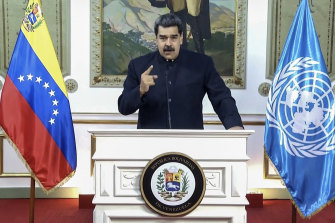 Nicolas Maduro, President of Venezuela, speaks in a pre-recorded video message during the 75th session of the United Nations General Assembly.Credit:UNTV/AP

In a lengthy, pre-recorded speech that ran more than twice the allotted 15 minutes, Maduro denounced what he called a "criminal, inhuman aggression" by the US aimed at ousting him from power, and said Venezuela would resist.

"The world must know that we are prepared to fight with the force of our history, our spirit, reason and international law," he said, standing before a giant portrait of South American independence hero Simon Bolivar.

The Trump administration has ramped up sanctions against Venezuela in the past two years as part of an effort to oust Maduro, who it accuses of corruption, human rights violations, and rigging his 2018 re-election.

Maduro has overseen a six-year economic collapse in the once-prosperous OPEC nation, which the opposition and most economists attribute to his country's interventionist economic policies. The ruling socialist party blames the US sanctions for the country's woes. 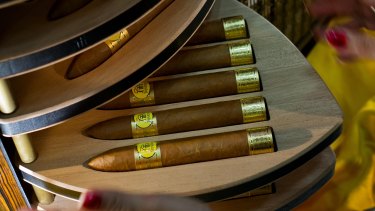 Trinidad cigars are displayed at the Cigar Festival in Havana, Cuba. US President Donald Trump has tightened import restriction on Cuban goods.Credit:AP

"We must demand the cessation of all unilateral coercive measures, of all the alleged sanctions, and that they allow our people to exercise their own rights," Maduro said.

Cuba and Nicaragua are two of Maduro's only remaining allies in Latin America, after left-leaning leaders lost power in countries like Brazil and Ecuador.

Trump on Wednesday banned US citizens from bringing home rum or cigars from Cuba and from staying at Cuban government-owned hotels, as he sought to lock in the Cuban-American vote in the swing state of Florida ahead of November's presidential election.

Since Trump took office in January 2017, he has been rolling back a detente with America's old Cold War foe pursued by his Democratic predecessor, Barack Obama.

Trump's aides believe his toughened stance has gone down well in the large Cuban-American community in south Florida, which includes Cubans who left the communist regime, an important voting bloc in a state where he and Democratic presidential candidate Joe Biden are locked in a tight race.

"Today, as part of our continuing fight against communist oppression, I am announcing that the Treasury Department will prohibit US travellers from staying at properties owned by the Cuban government," Trump said at a White House event.

"We're also further restricting the importation of alcohol and Cuban tobacco," the Republican president said at the ceremony honouring Bay of Pigs veterans.

In a later video address, Venezuelan opposition leader Juan Guaido – who is recognised as the legitimate president by dozens of countries including the United States and Australia – urged the international community to take "decisive action" to oust Maduro, without being specific.

"Today I call upon all representatives of the member states … to consider a strategy that contemplates different scenarios after the diplomatic route has been exhausted," Guaido told representatives of countries that recognise him.