The seven-months pregnant Duchess revealed the design to two young girls on a visit to a school in the Atlas mountains – where she wowed kids by speaking French. 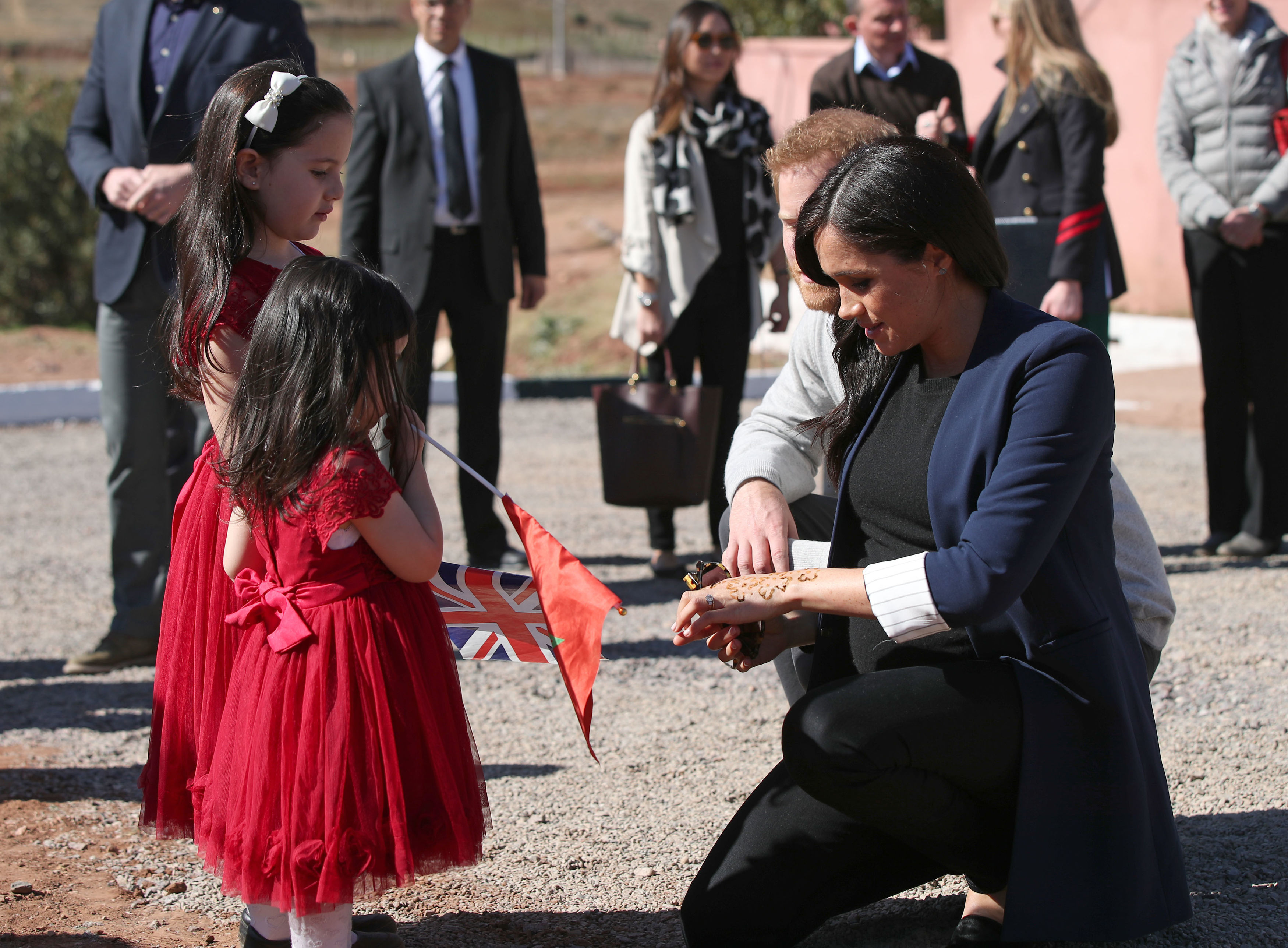 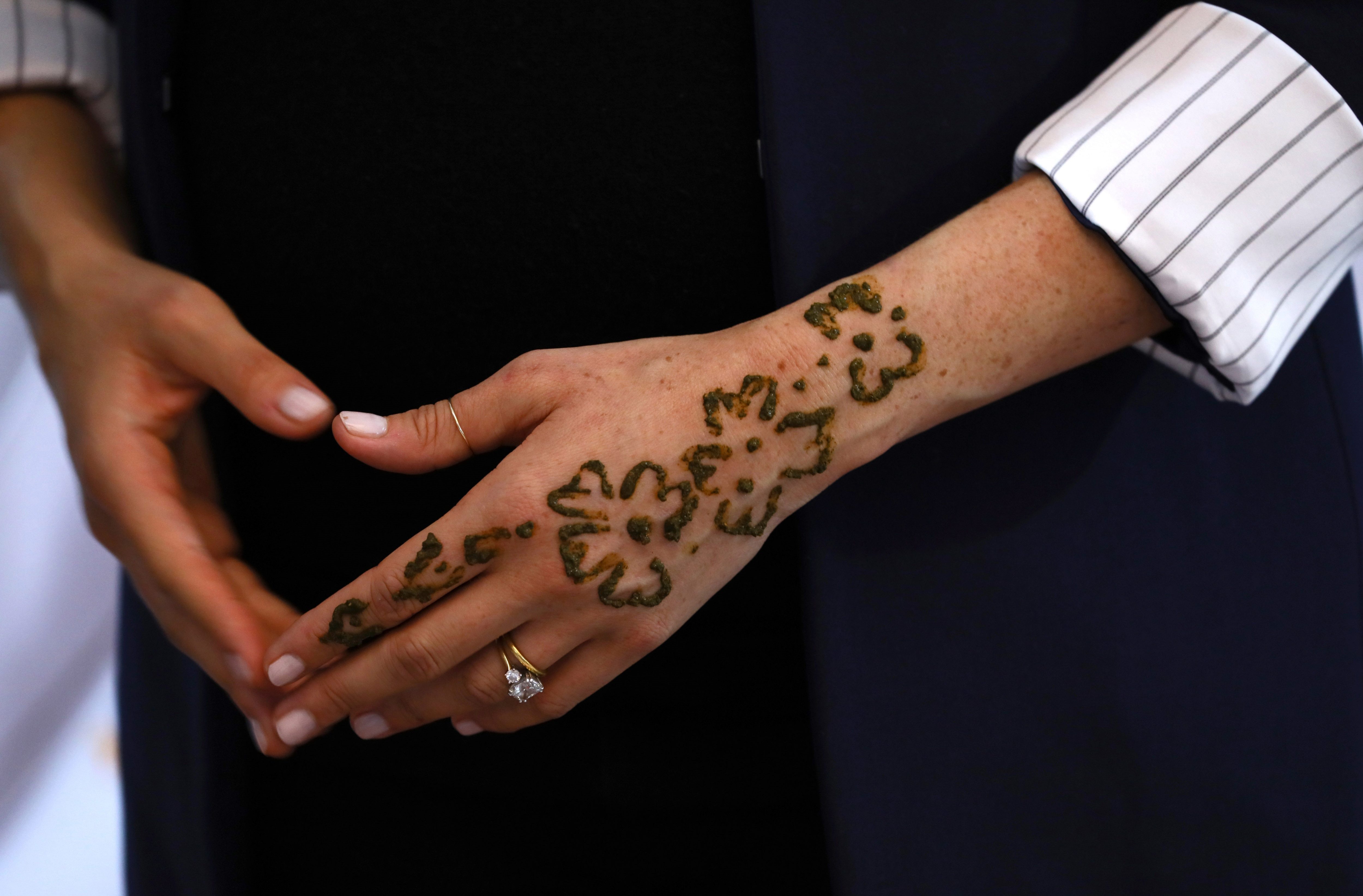 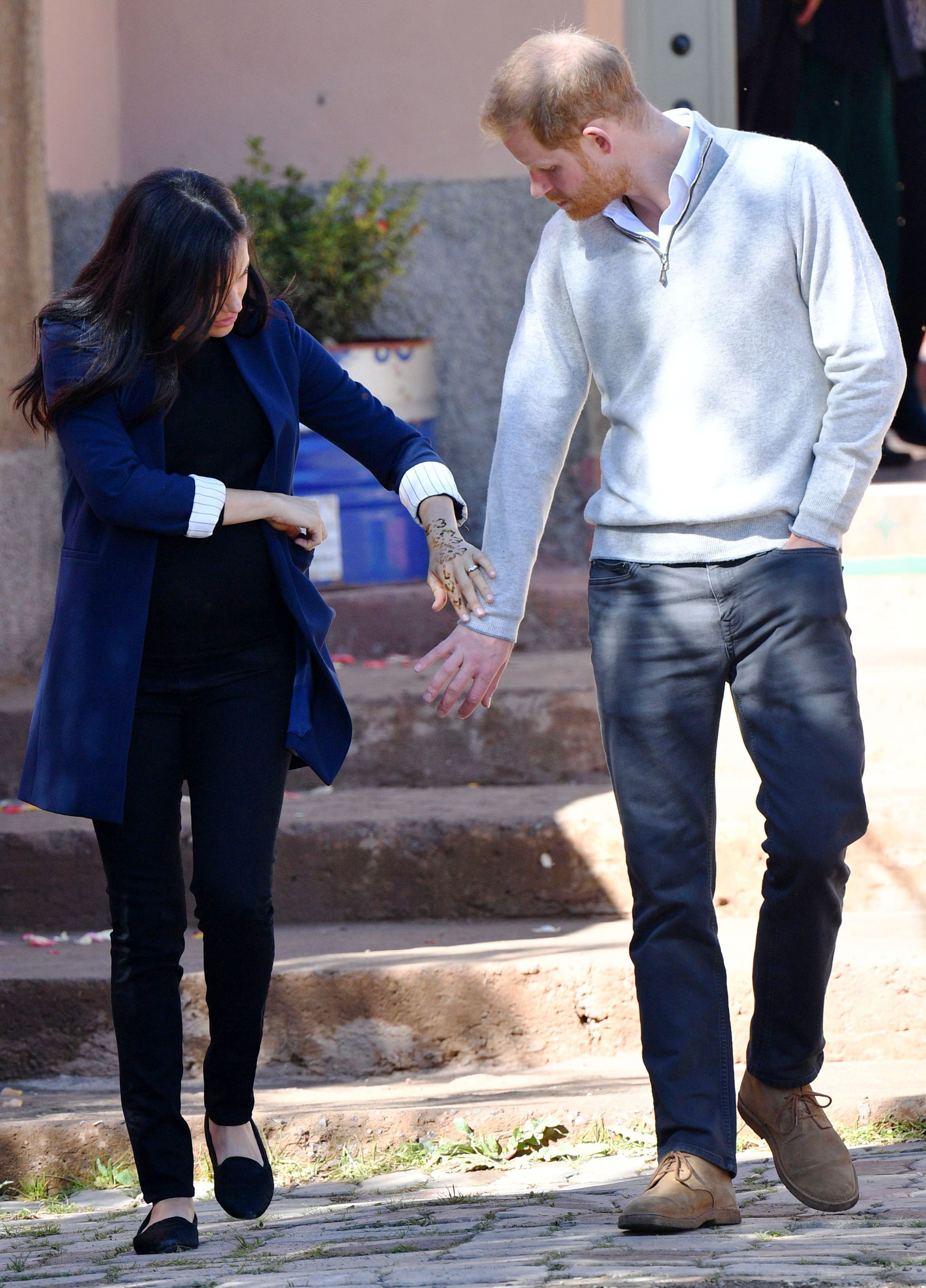 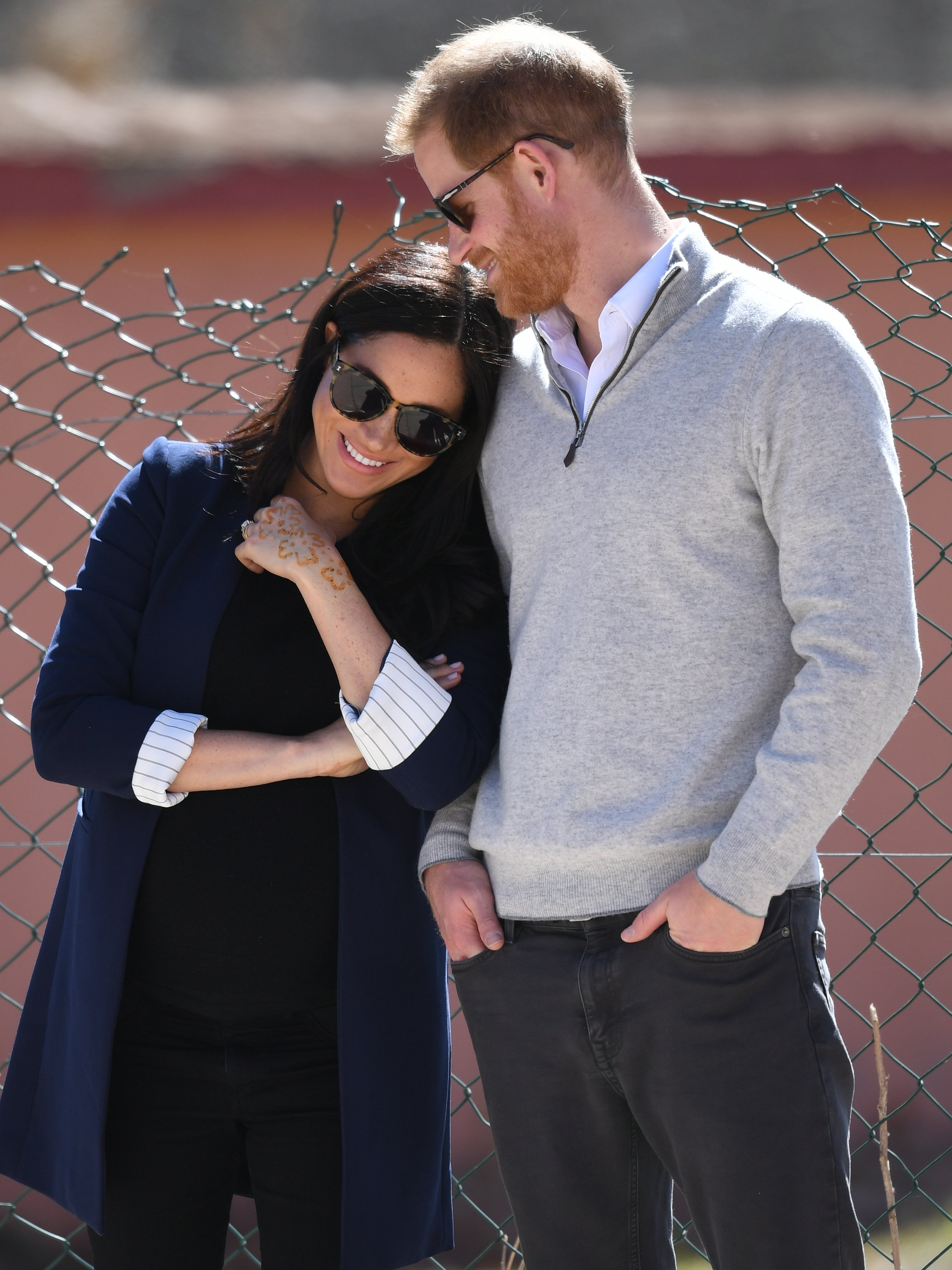 Meghan told Rania, five, and two-year-old Rayhanna: "Hi girls, so cute! What are are your names? So sweet!"

Showing them the henna she added: "Nice, isn’t it? So pretty!"

The plant-based ink – which is safe for expectant mums – is deemed a symbol of good luck and a blessing for any significant event such as a birth.

A teenage pupil drew the flower design during a visit to an educational boarding school the morning after the Duke and Duchess of Sussex were being greeted by a guard of honour as they landed in Casablanca.

In brilliant winter sunshine Harry and Meghan were welcomed to the village of Asni by pupils at a centre run by the Moroccan NGO Education For All, founded by Brit entrepreneur Michael McHugo.

Pupils waved Union Jacks and Morocco flags as their guests arrived from the capital Rabat by helicopter.

Meghan and Harry walked along a line of waiting teenagers and following local custom touched a hand to their heart each time they shook the hand of a student.

Inside, the Duchess showed off her impressive French as she asked two girls: “Ce que tu veux etre quand tu quitte l’ecole?” – meaning, what do you want to do when you leave school?

She also asked: “Vous voulez aller a l’universite” – do you want to go to university. 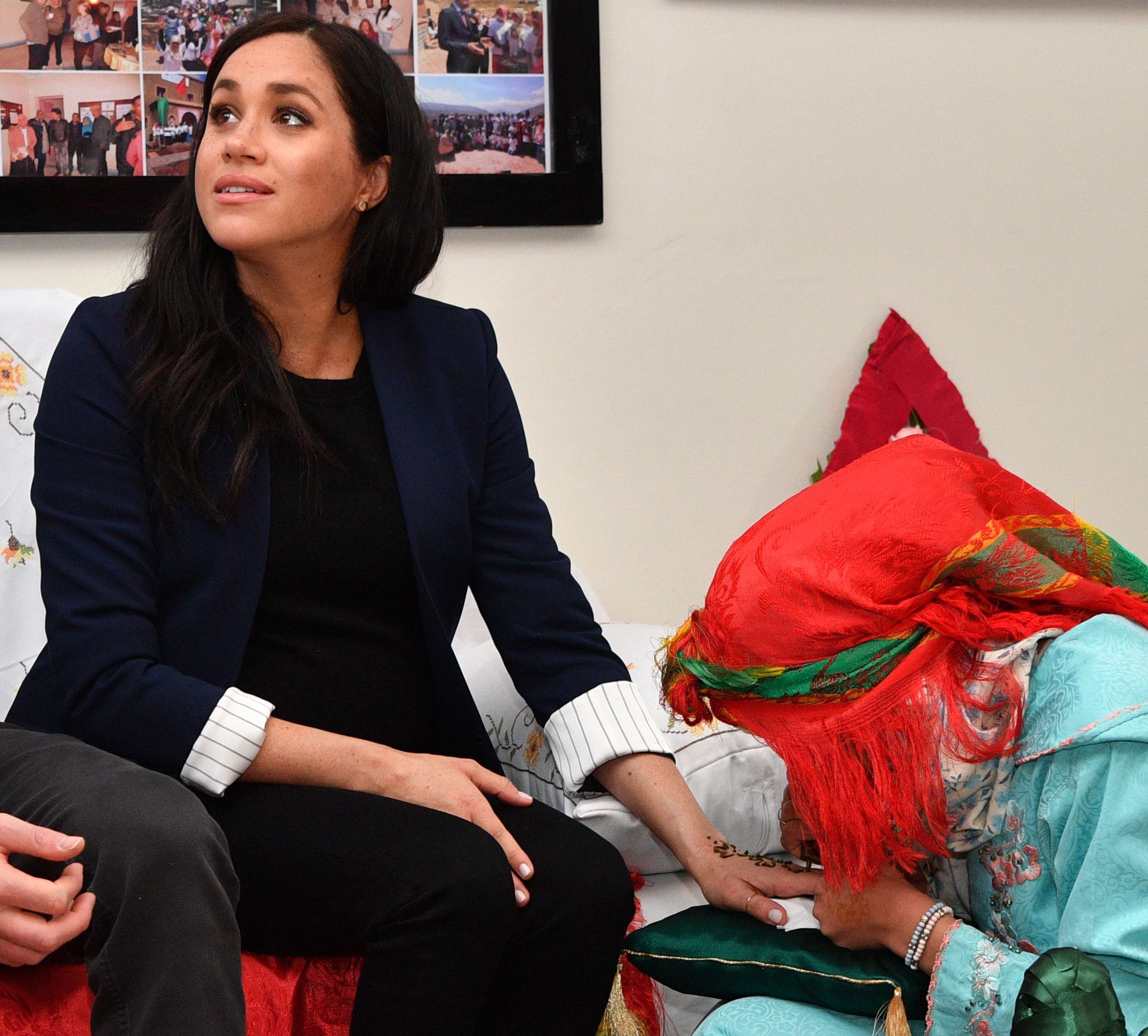 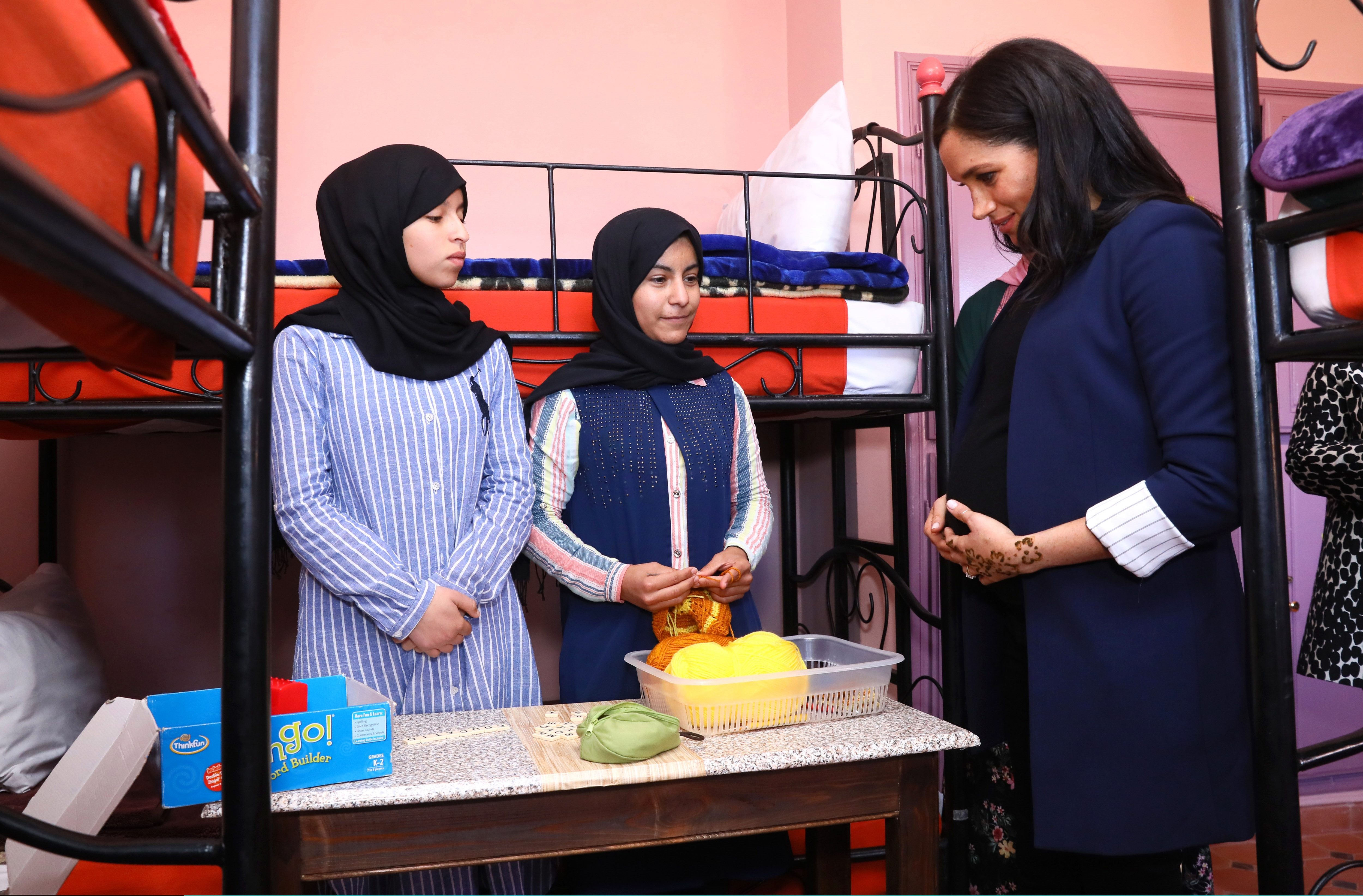 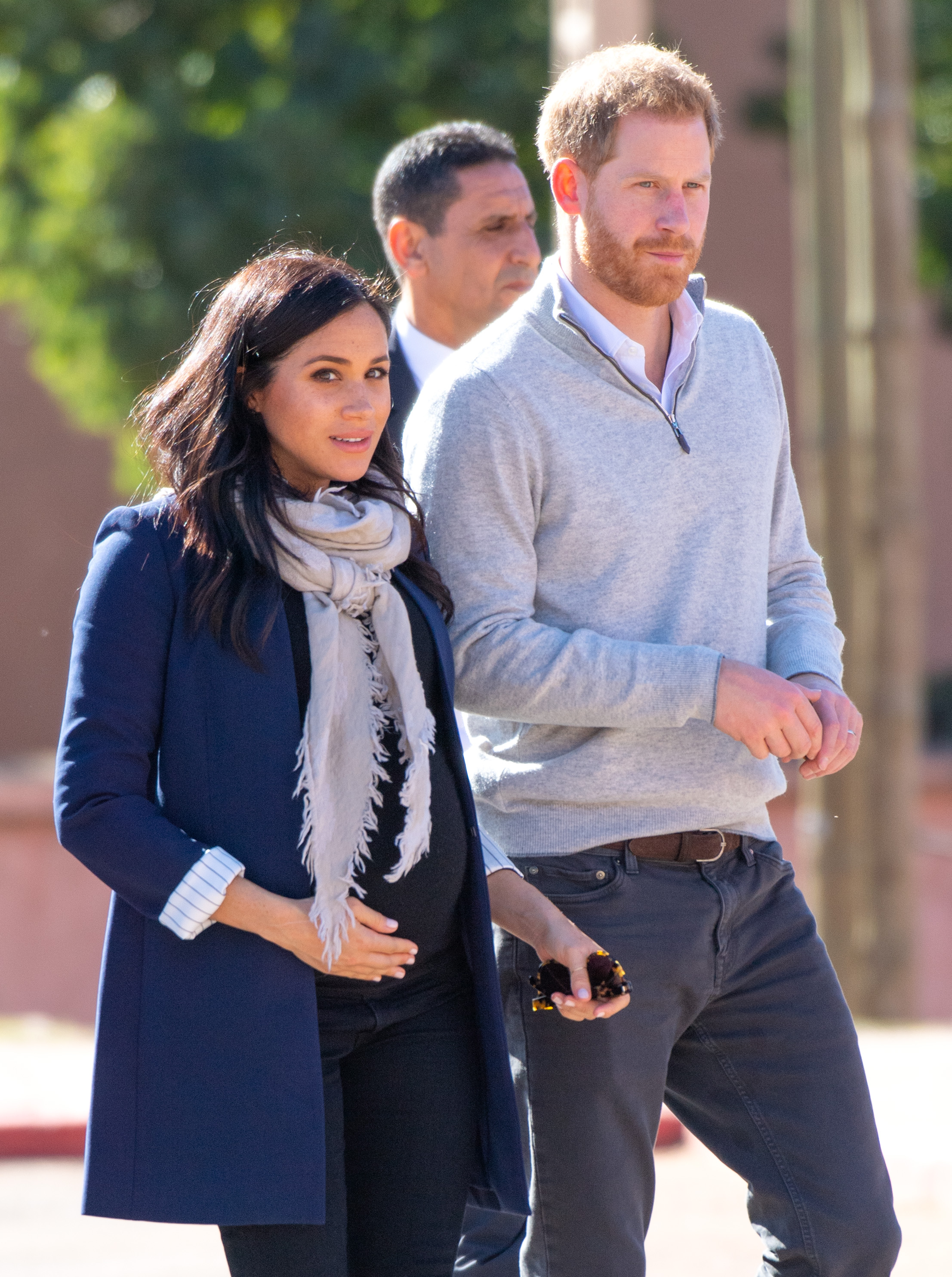 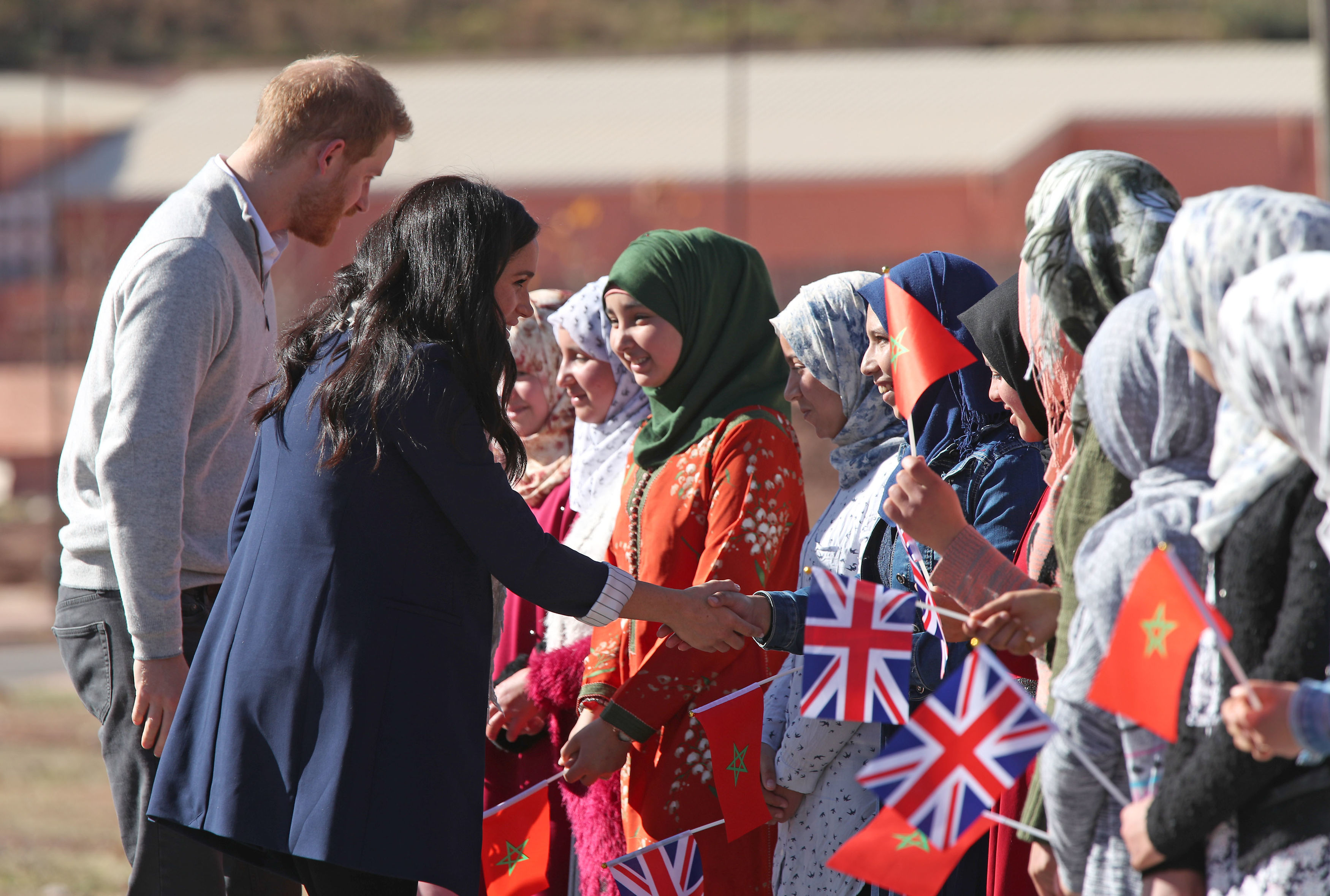 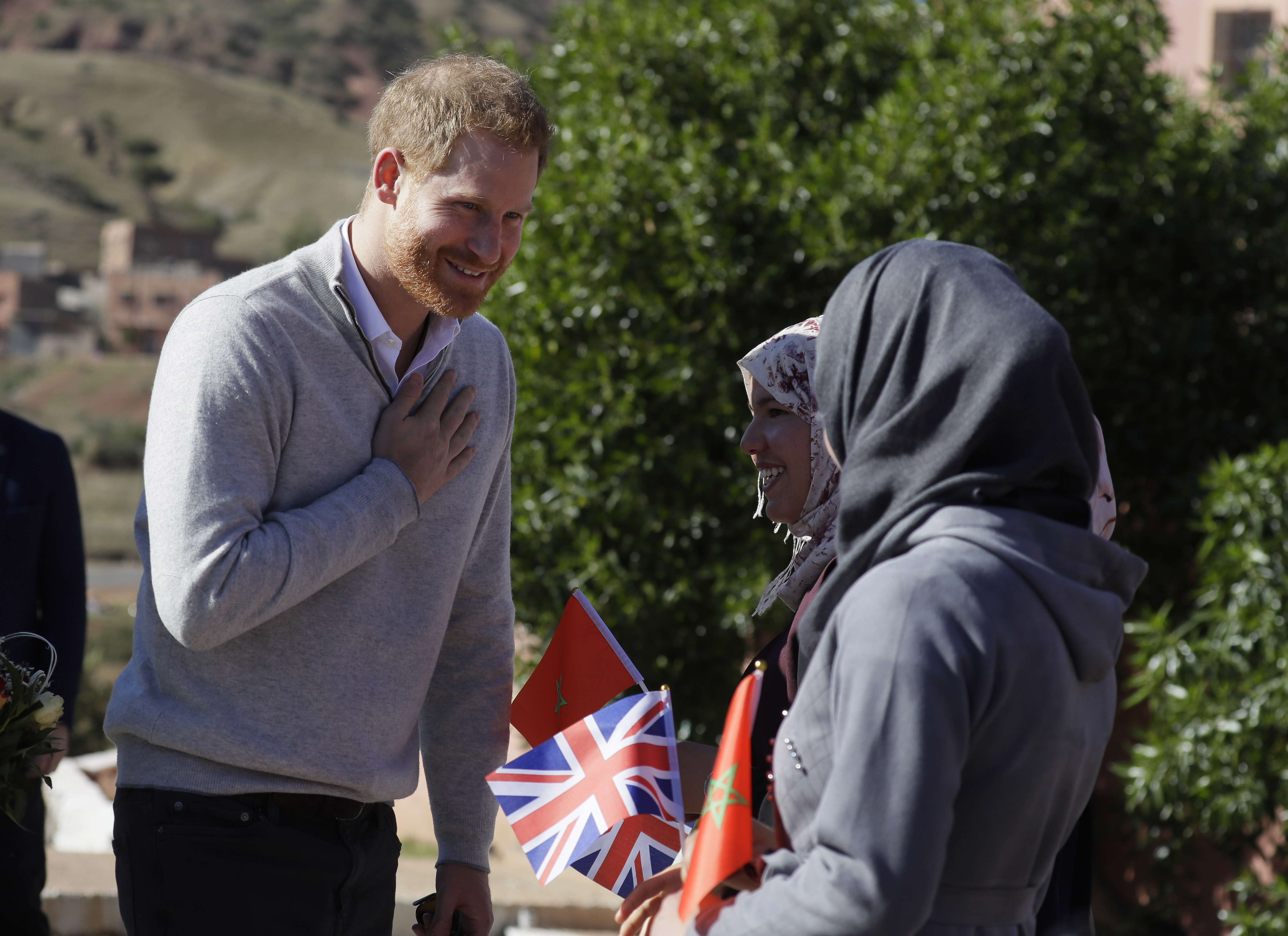 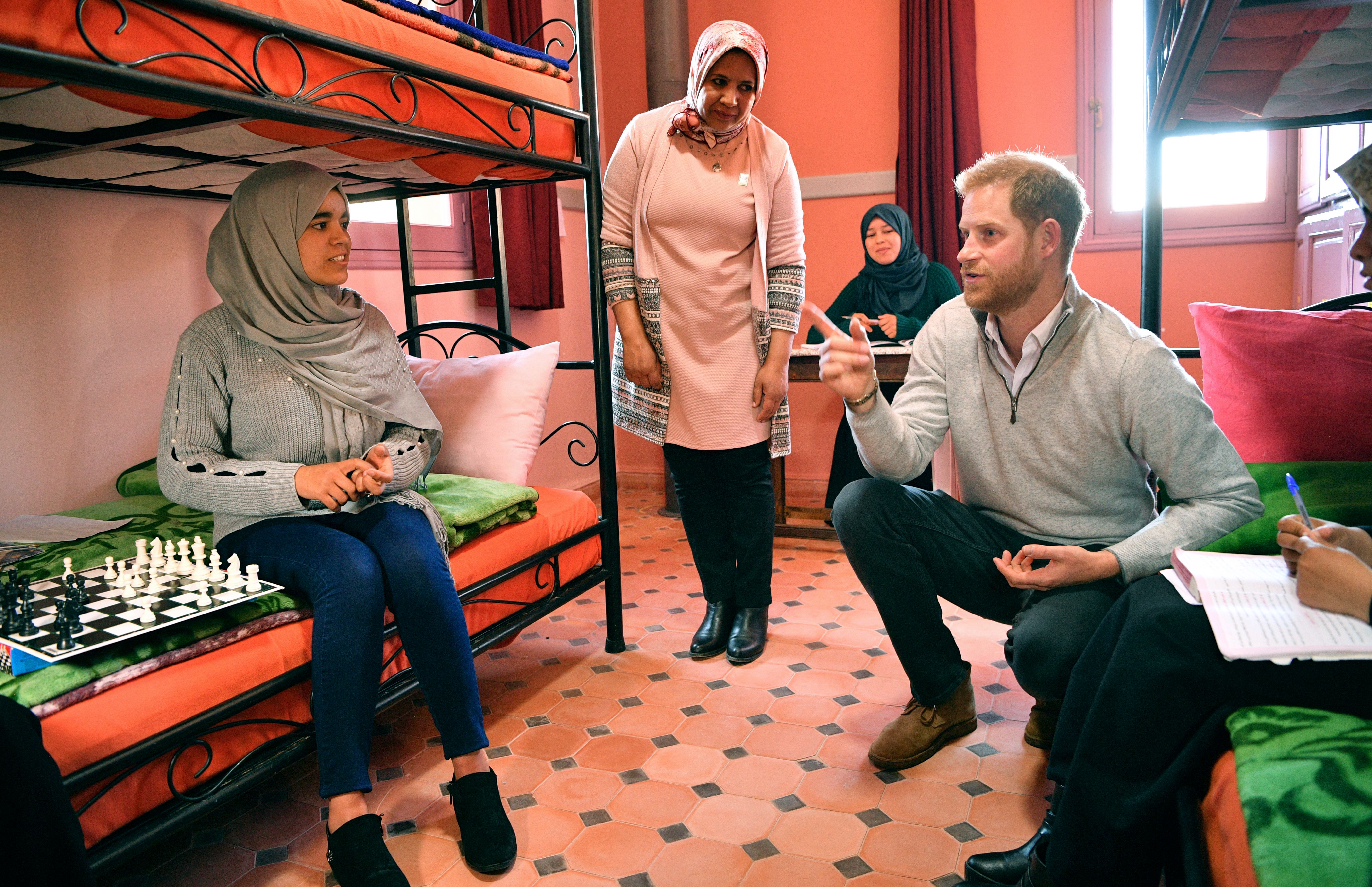 Harry asked one pupil "Is this the best school in Morocco?" and as they were taken inside the boarding house he put his hand reassuringly on his heavily pregnant wife's back.

The students are from remote communities in the mountains whose parents would normally not be able to afford to send their daughters to school after primary education.

Harry and Meghan, wearing shades in the bright sunshine, tenderly held hands as they walked to watch a school football match.

The village is only nine miles from where two Scandinavian backpackers were butchered by a gang of ISIS sympathisers in December.

Mike McHugo, founder of Education for All, said: "The visit is a good news for the people of the area after such a tragic and isolated incident."

Meghan then had a quick change of outfit into a blouse and high heels and Harry put on a blazer and tie for a ceremony to award Mr McHugh an MBE for gender equality in Morocco.

Later today they are expected to attend a formal reception hosted by the British Ambassador in Rabat.

On Monday their itinerary takes them on a visit to the Moroccan Royal Federation of Equestrian Sports, which helps support children with special needs.

There they will watch a riding demonstration and attend a horse-grooming session with some of the kids.

They will then go to Villa Des Ambassadors, which teaches disadvantaged children how to cook traditional recipes and will meet disabled kids who work in a specially-designed restaurant.

Finally they will visit a market run by social entrepreneurs and meet young people. 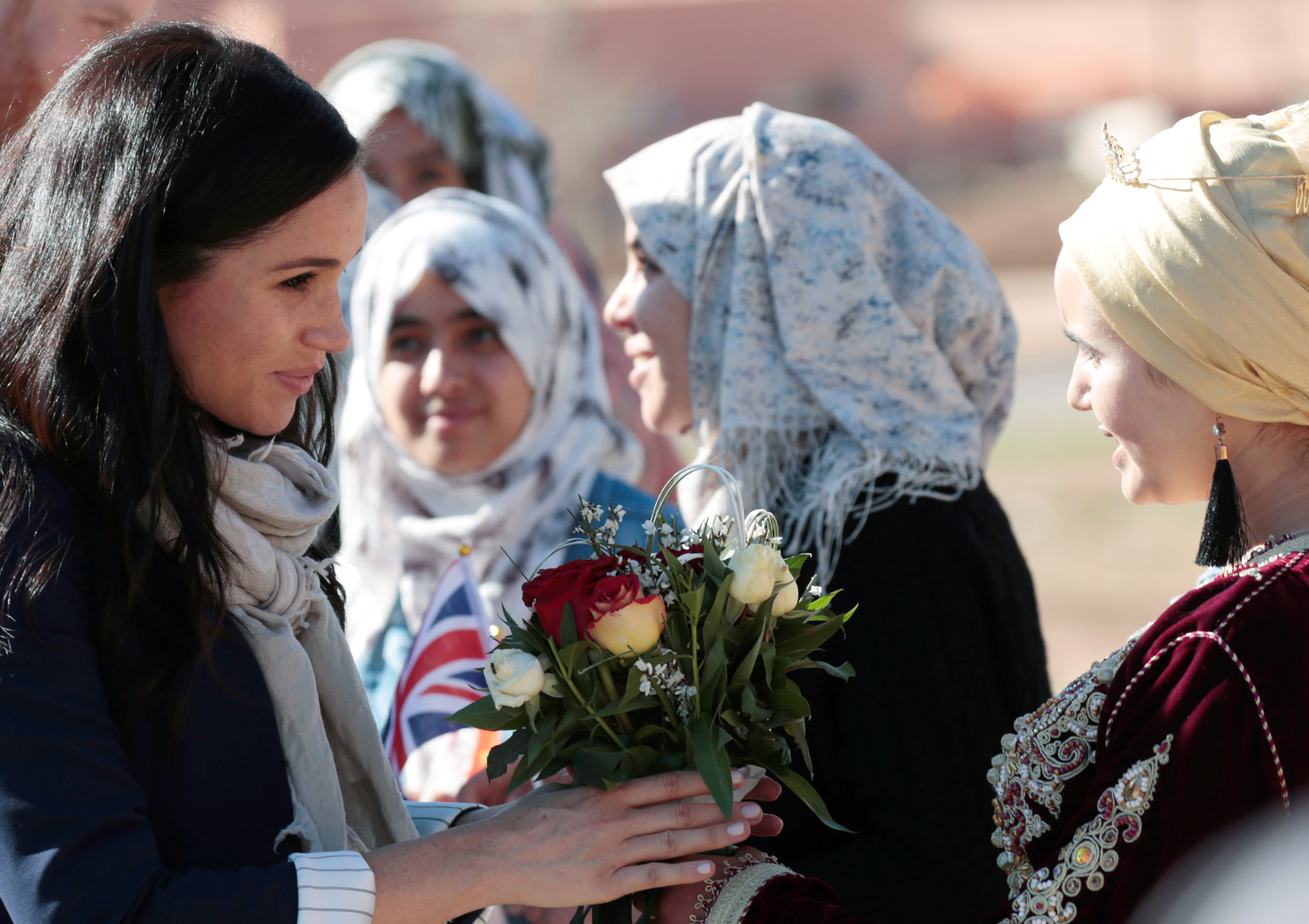 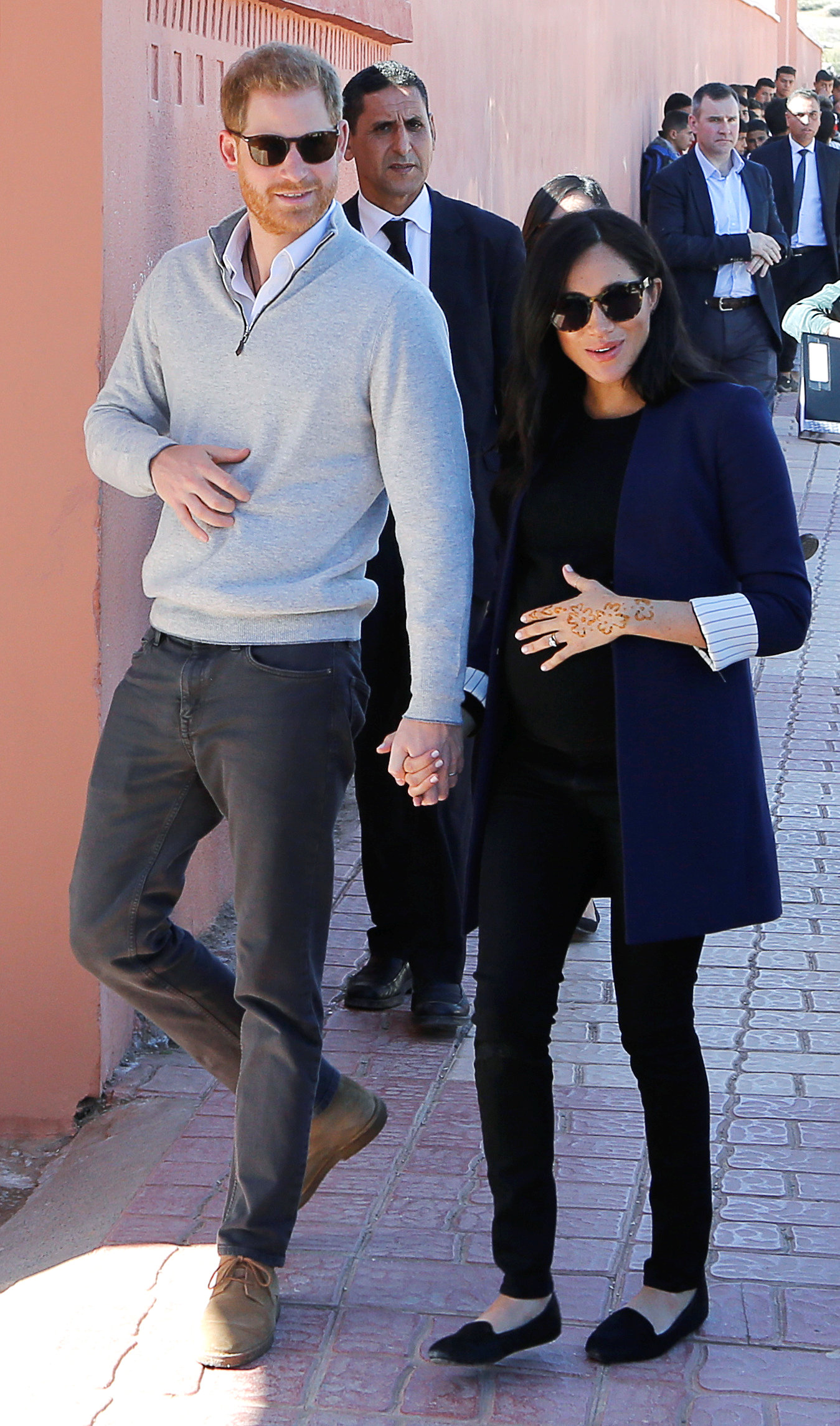 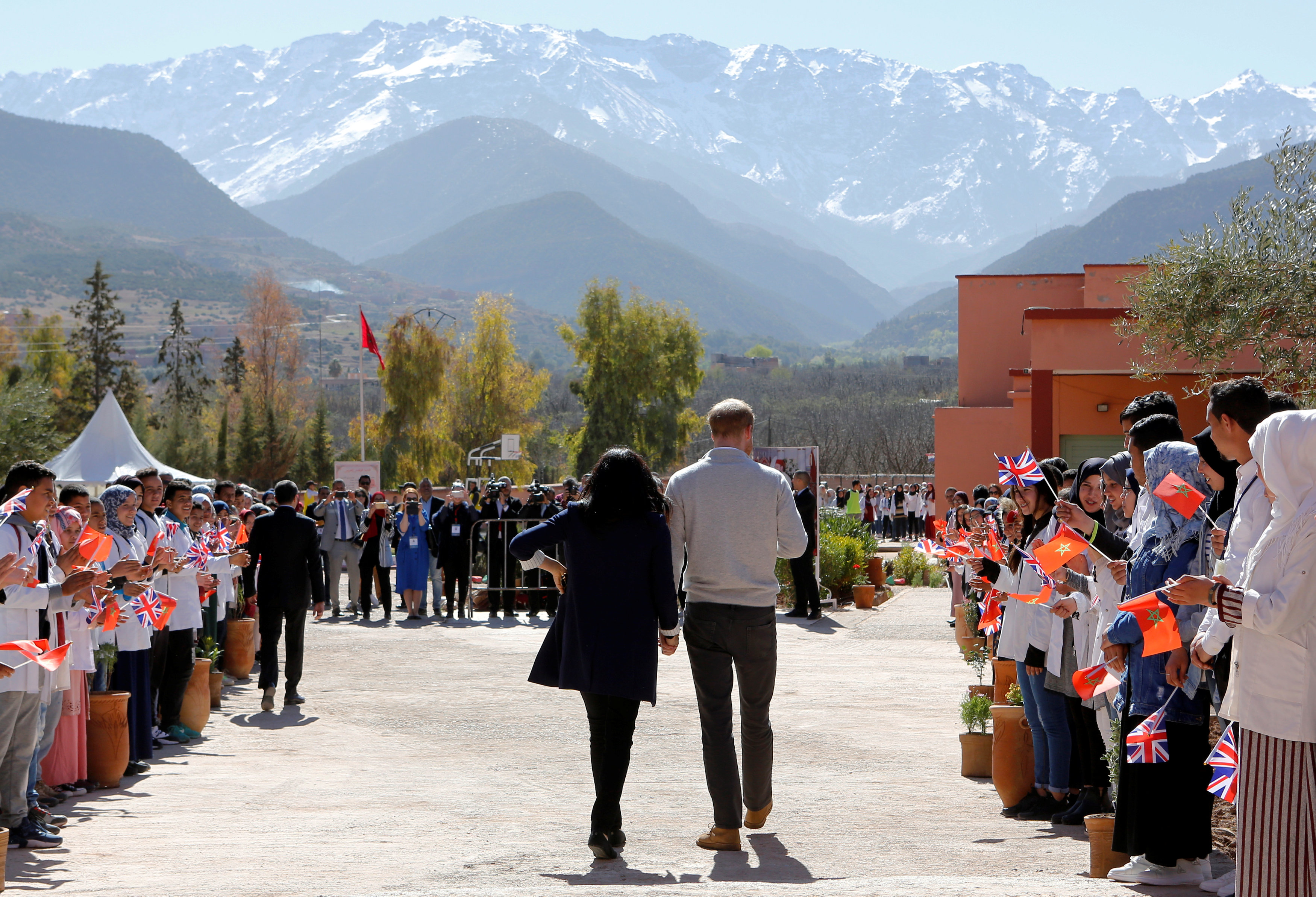 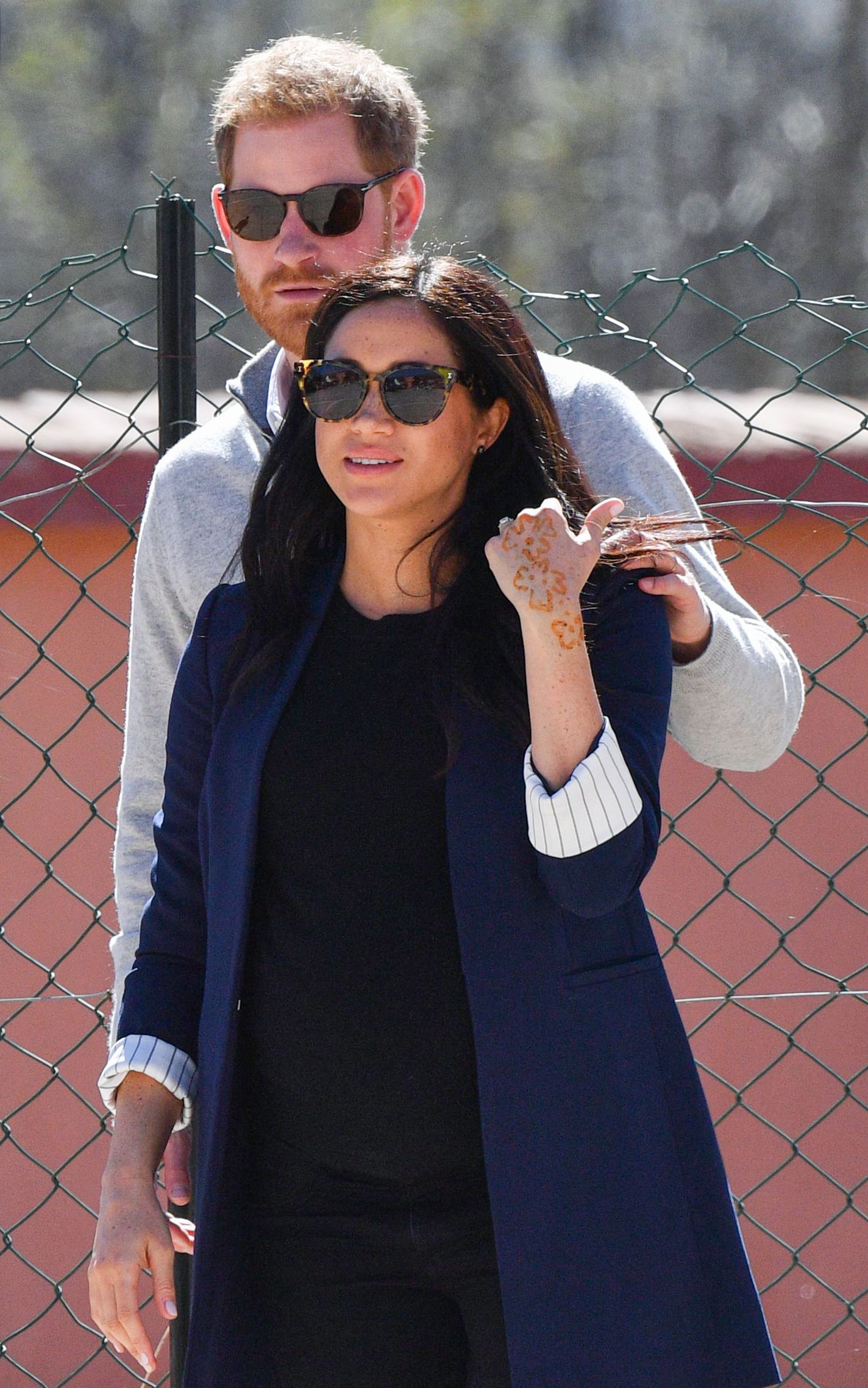 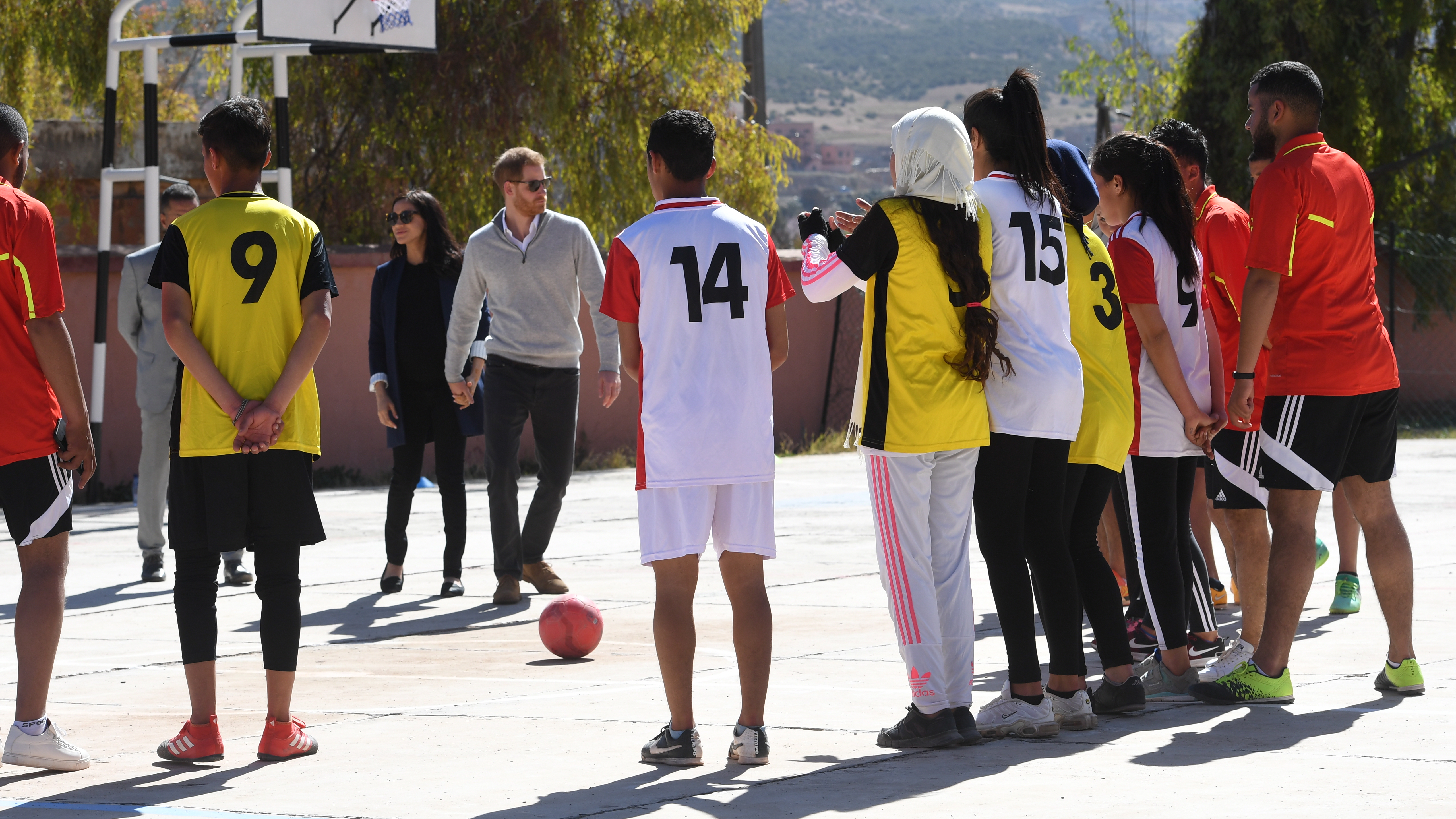 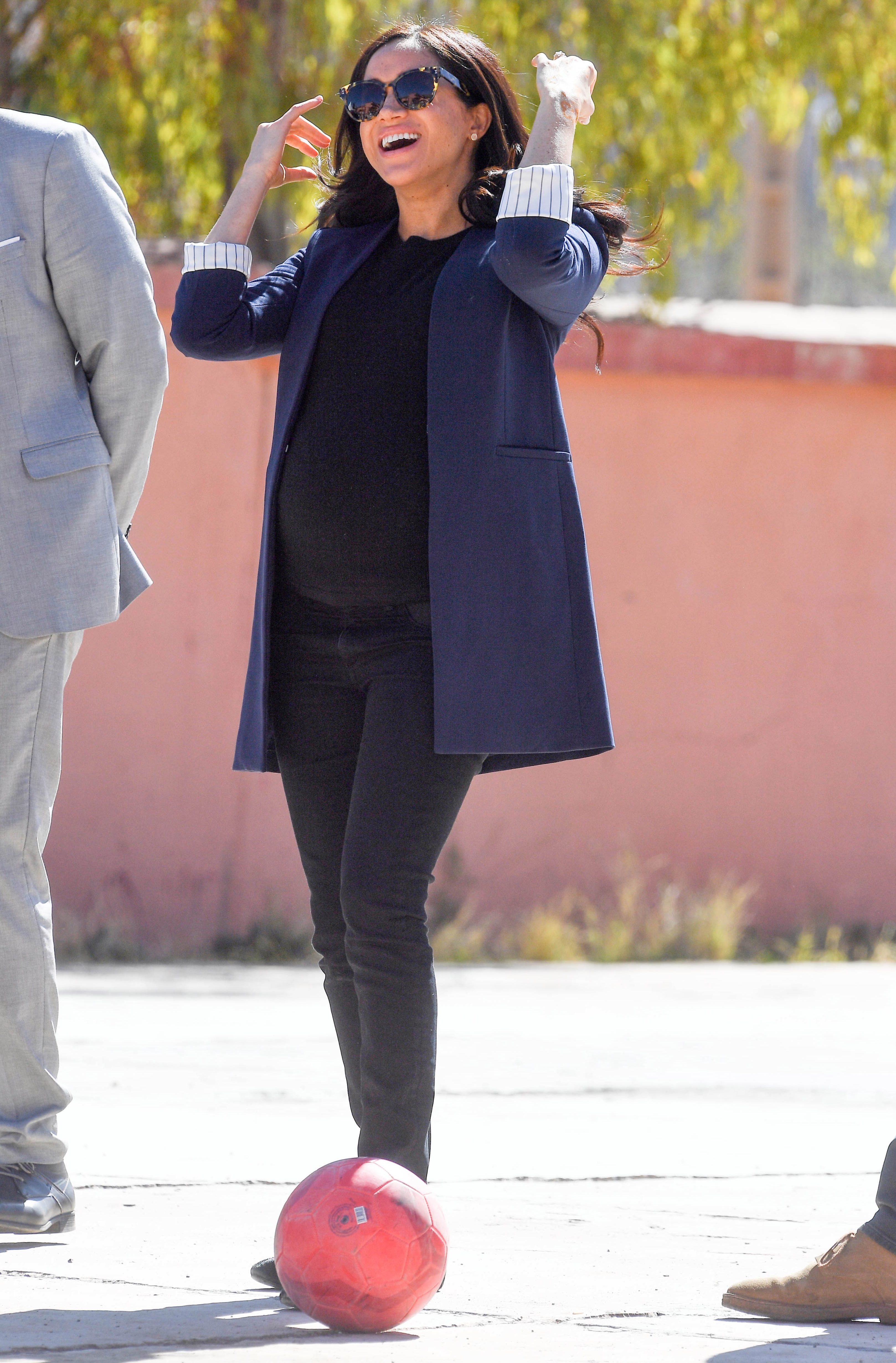 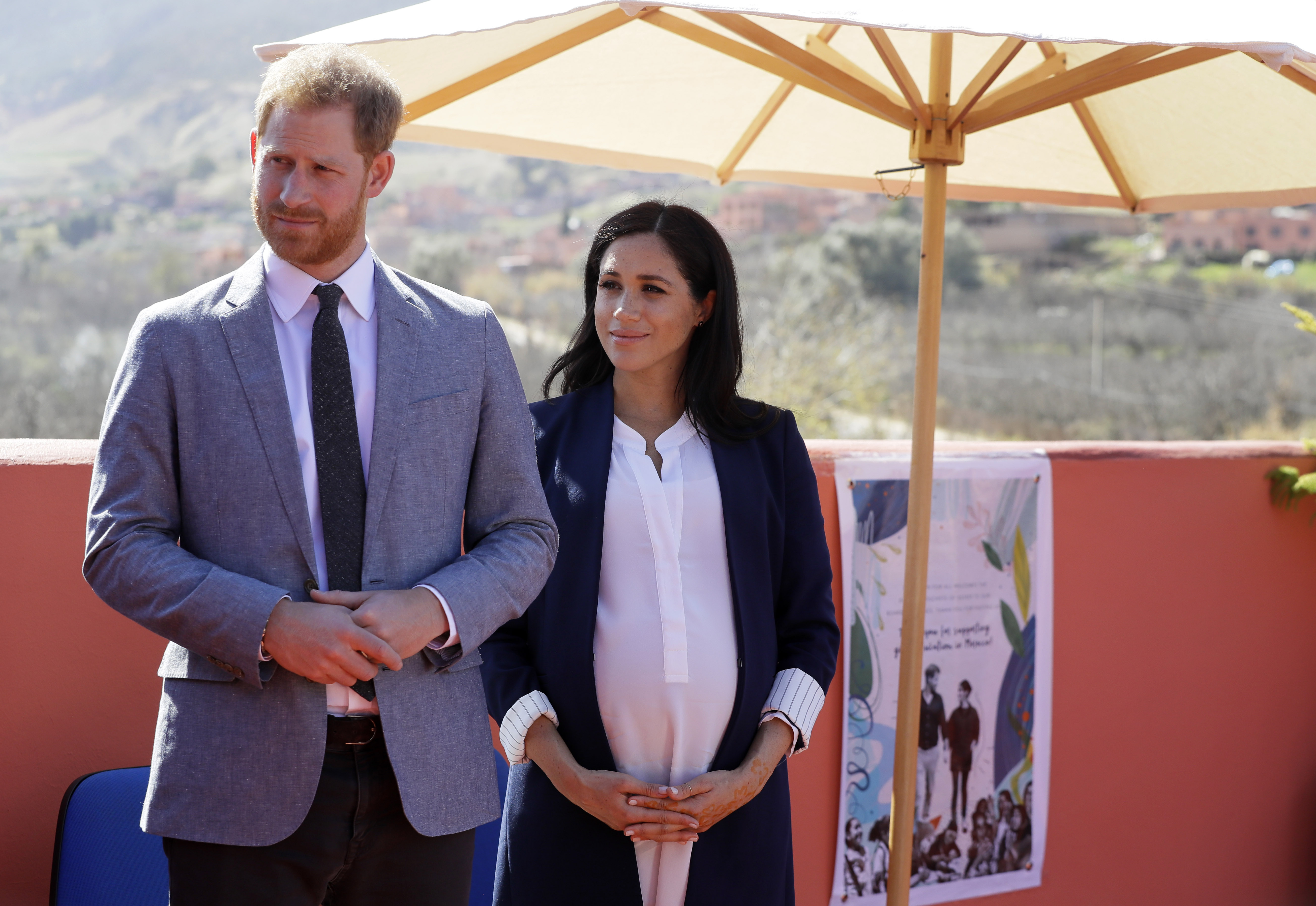 Last night the Duke and Duchess of Sussex were delayed by two hours after their commercial flight was late taking off following the knock-on effects of an earlier delay to their scheduled plane.

Meghan and Harry were welcomed to the country by the British ambassador Thomas Reilly and his wife Alix.

The Duchess kicked off the tour in style, wearing a red bespoke Valentino dress with a pink handbag and gloves and matching high heels by Christian Dior.

The Duke of Sussex also looked stylish in a grey suit as he inspected a guard of honour in dazzling white uniforms.

The royals then walked along a red carpet that led to Casablanca Airport's royal suite where they were offered milk and dates.

A motorcade of black limousines was on hand to take them to meet the country's Crown Prince Moulay Hassan, 15, who welcomed them at the entrance to their villa in the grounds of the royal palace.

They will be staying as guests of Morocco's King Mohammed VI.

Mr Reilly said: "It’s hugely exciting to have their royal highnesses the Duke and Duchess of Sussex here for the the next few days and I’m really excited to showcase the vital roles that girls education and youth employment are playing in shaping modern Morocco.

"This official visit by the Duke and Duchess of Sussex will highlight Morocco’s focus on women’s empowerment, girls education, inclucivity and the encouragement of social entrepreneurship."

The pair are making only their third official overseas trip together, following visits to Dublin and a tour of Australia, New Zealand and the South Pacific last year.

The royal couple are set to have a busy few days with seven official engagements lined up.

Security fears had been sparked for the royal visit after riots erupted in Rabat earlier this week during a march by teachers demanding more pay.

Royal protection officers are said to be worried about the situation and have banned the royal couple from walkabouts.

The tour comes days after Meghan enjoyed a baby shower in New York with pals including Serena Williams.

Meghan's trip to the Big Apple was criticised in some quarters after the lavish visit was said to have cost £330,000.

Harry's dad Prince Charles visited Morocco in 1995 and then again in 2011 with the Duchess of Cornwall. 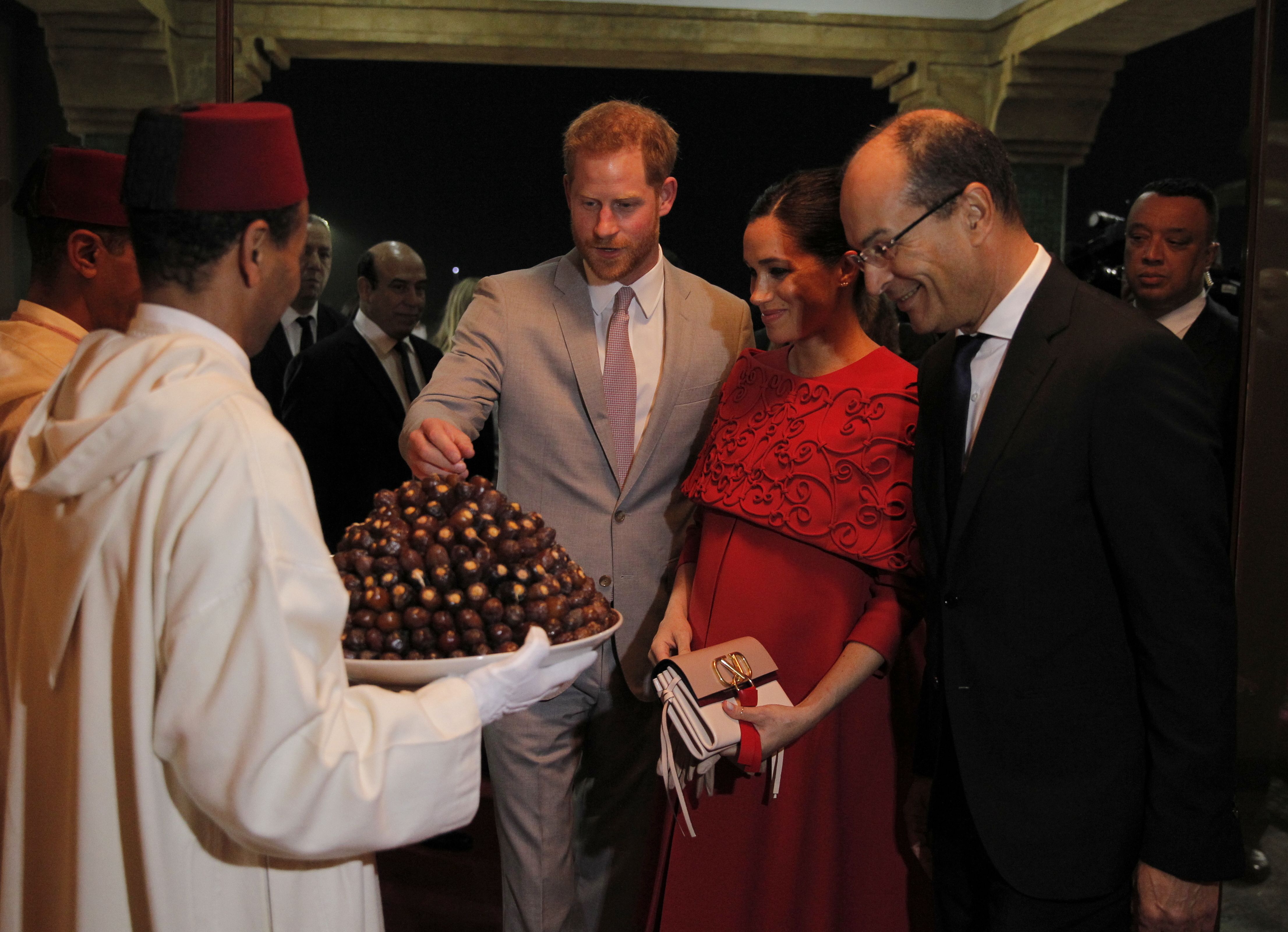 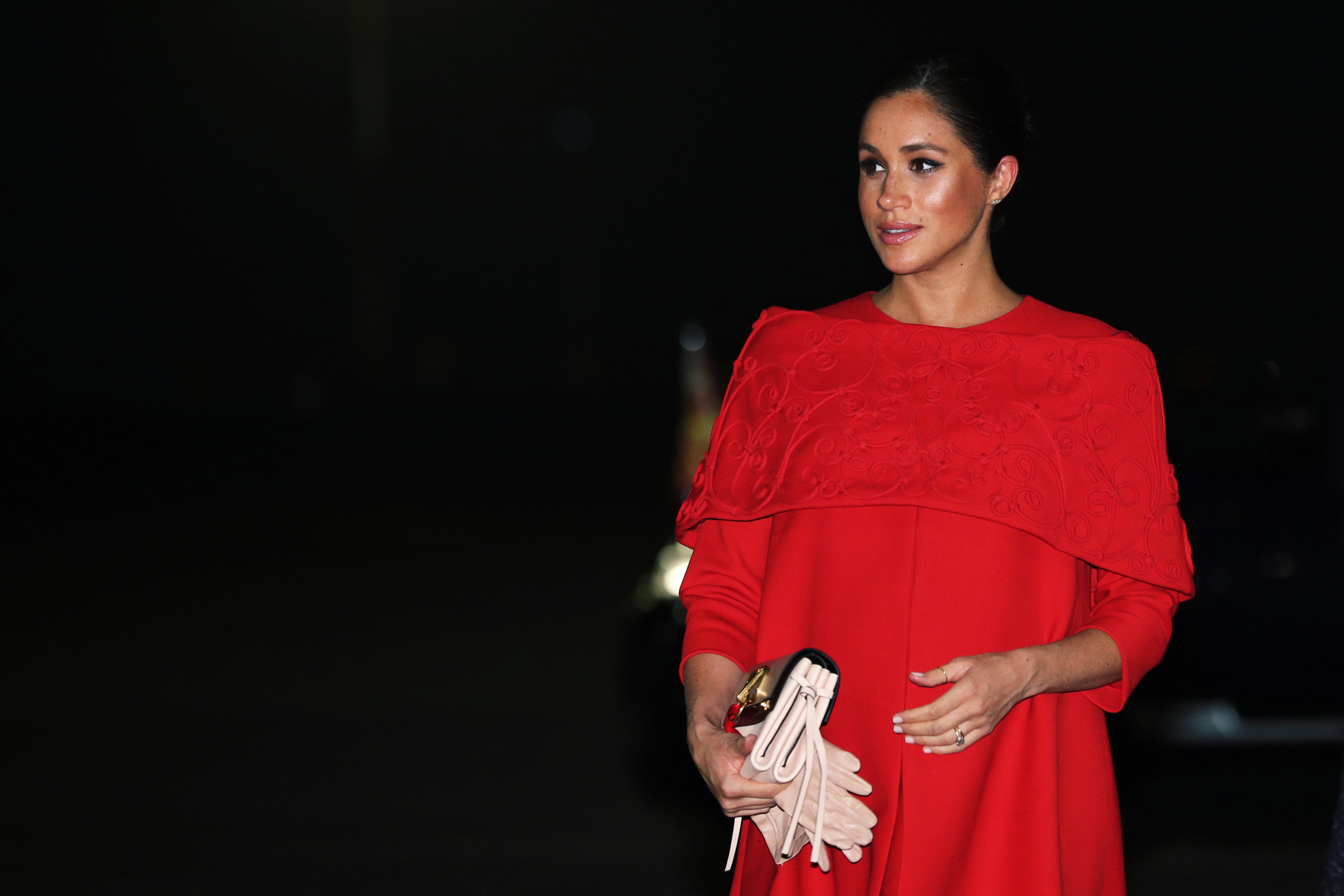 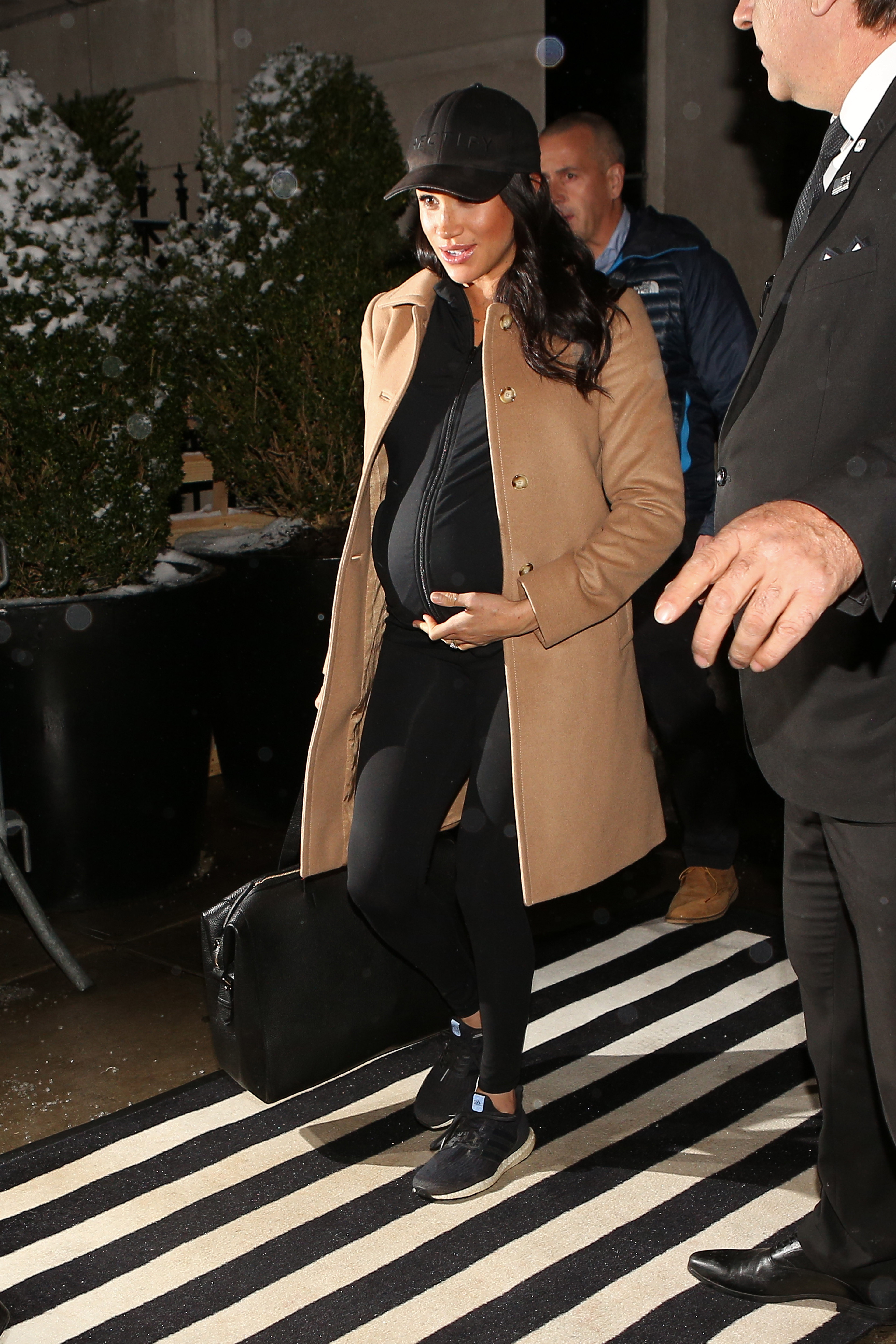