Would you pay £6,000-a-night to stay in a PIGSTY? Soho Farmhouse – the ‘Butlins for toffs’ that’s popular with celebrities and home of Meghan’s hen party – unveils its new ‘piglet’ cabins

With guests like Meghan Markle, David Cameron and Cara Delevingne, Soho Farmhouse is the ultimate countryside retreat for the rich and famous.

Located in an exclusive pocket of rural Oxfordshire guests are made to feel they have the entire English countryside at their disposal, away from the stresses of life on the A-list.

Club members can choose from staying in the main farmhouse, farm cottages or opt for something a bit different and sleep in a log cabin or a ‘bell tent’.

But most extraordinary of all are Soho Farmhouse’s new ‘piglet’ cabins. The converted pig sties are smaller versions of their wooden cabins, made to look like animal huts on the outside and luxury alpine lodges on the inside.

While prices vary and bookings are largely only available to Soho House club members, a night in a ‘pig sty’ will cost you around £6,000. 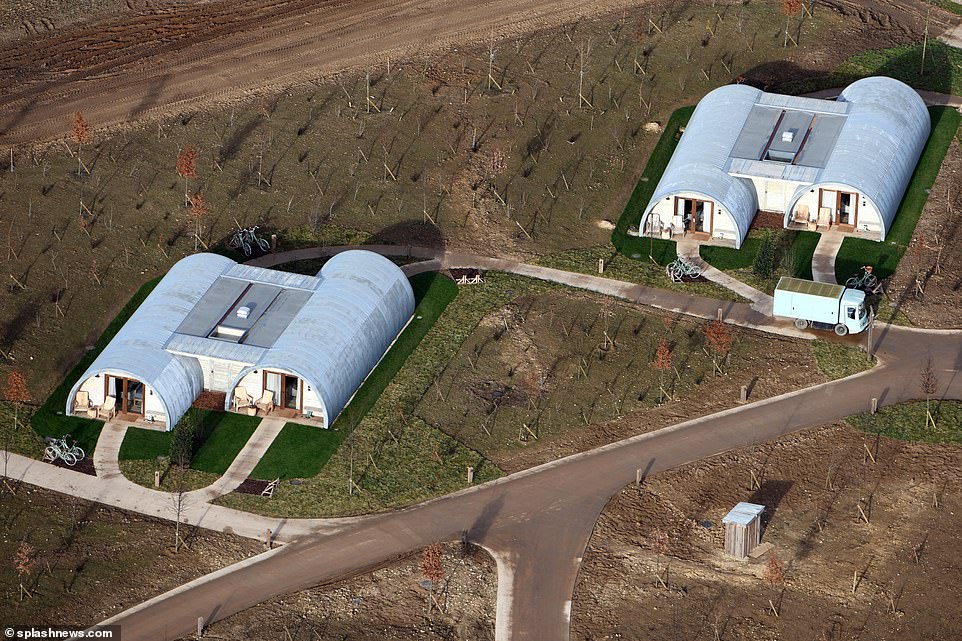 The Duchess of Cambridge’s favourite countryside getaway Soho Farmhouse includes ‘piglet rooms’ (pictured from above) converted from old pig sties. They sit in clusters in a meadow near the main farmhouse in an exclusive part of Oxfordshire 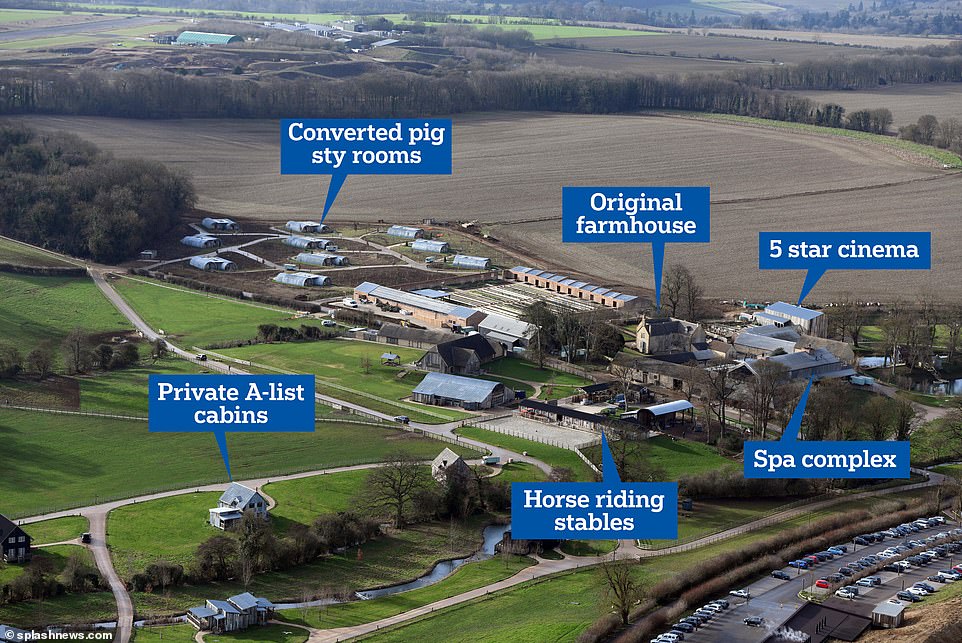 A map of the Soho Farmhouse estate shows the extent of different accommodation on the site. From the main luxury farmhouse, five-star cinema, spa complex and private A-grade cabins to the converted pig sties to the rear 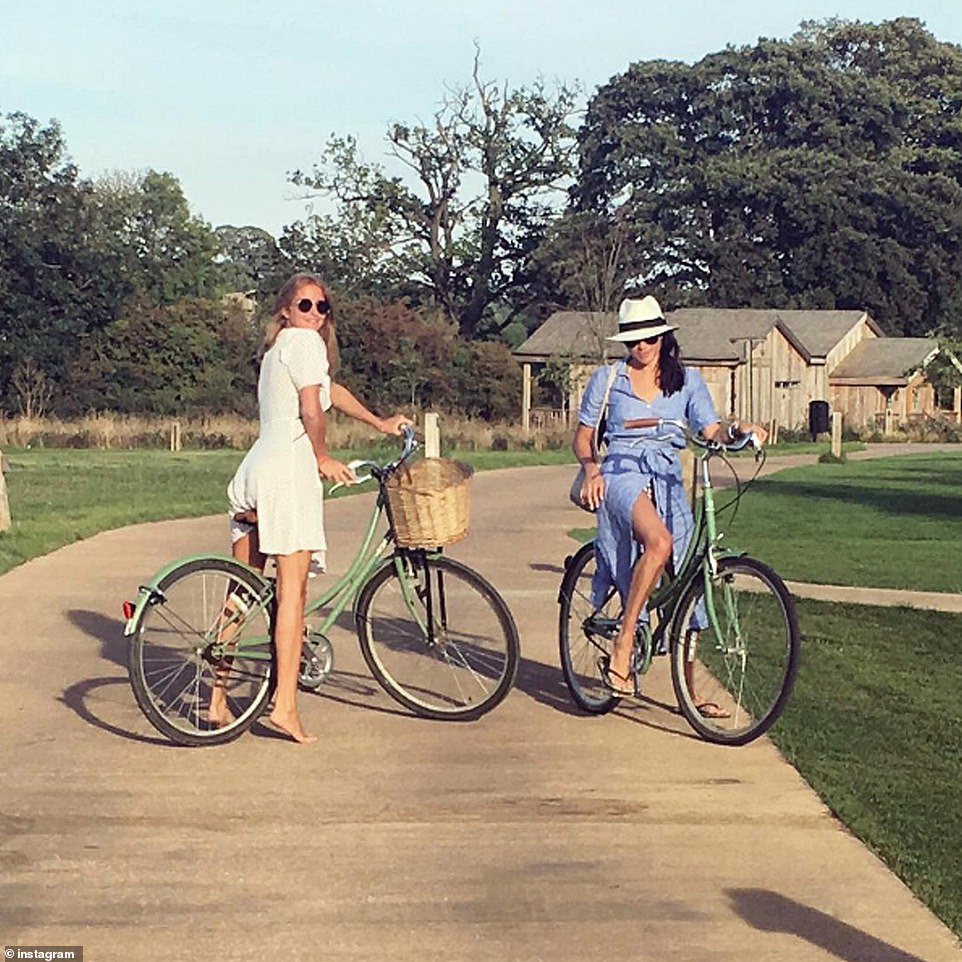 Meghan stayed at Soho Farmhouse with her friend Millie Mackintosh before her engagement to Prince Harry was announced. She is pictured on a bike available to rent from the retreat with the former Made In Chelsea star in the summer

On the club’s website, they are described as: ‘Smaller rooms that sit in clusters of four in a secluded wildflower meadow.

‘Each Piglet cabin features an emperor-size bed and sofa, plus a private bathroom with rainforest shower. Interiors feature Moroccan-inspired textiles with a country twist.’

Each piglet cabin comes complete with its own bikes so guests can cycle off into the Cotswolds and are located in one of the meadows away from the main farmhouse.

Aside from the novelty of staying in a pig sty, an infinity pool, spa, yoga centre, five-star cinema and Japanese restaurant can all be found on the estate. 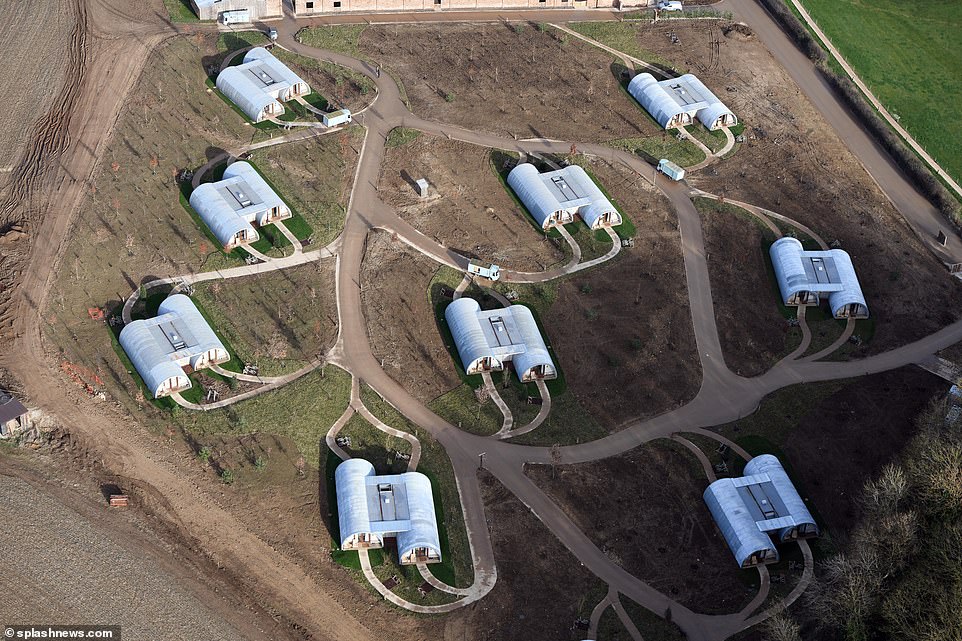 On its website Soho Farmhouse describes the piglet accommodation: ‘Our Piglet cabins are smaller rooms that sit in clusters of four in a secluded wildflower meadow. Each Piglet cabin features an emperor-size bed and sofa, plus a private bathroom with rainforest shower. Interiors feature Moroccan-inspired textiles with a country twist.’ 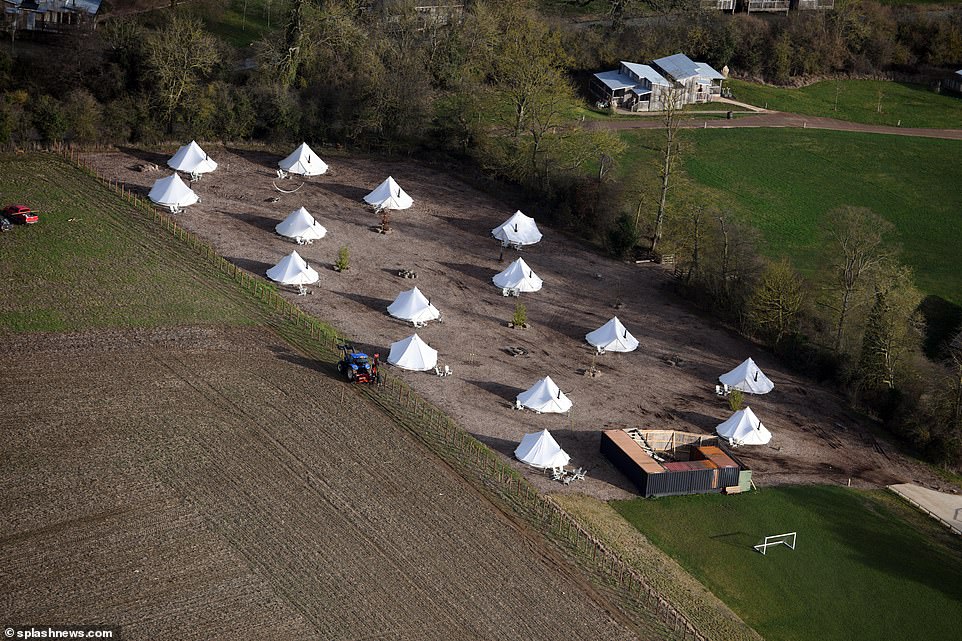 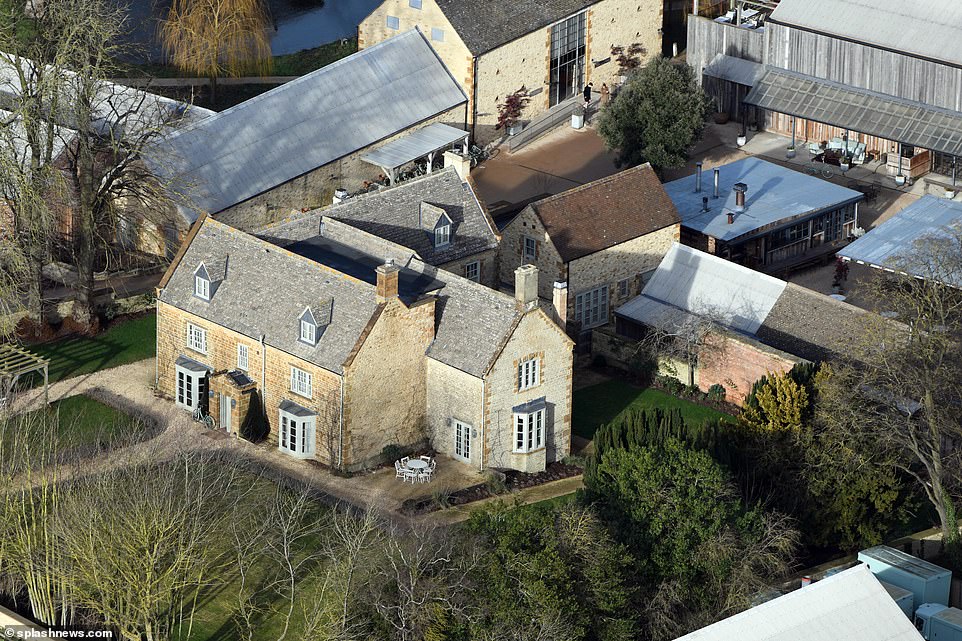 Celebrity retreat: The main Soho Farmhouse is pictured from above. Guest facilities include a yoga suite and a Japanese grill restaurant where A-listers can fill up on raw fish salads

Meghan is a well-known fan of the Farmhouse, staying there with Prince Harry and for her hen party in 2018.

She also enjoyed a weekend there in 2016 with her reality TV star friend Millie Mackintosh, previously of Made In Chelsea.

The site itself isn’t far from the Cotswold hills where the likes of the Beckhams and now Harry and Meghan themselves have a second home. 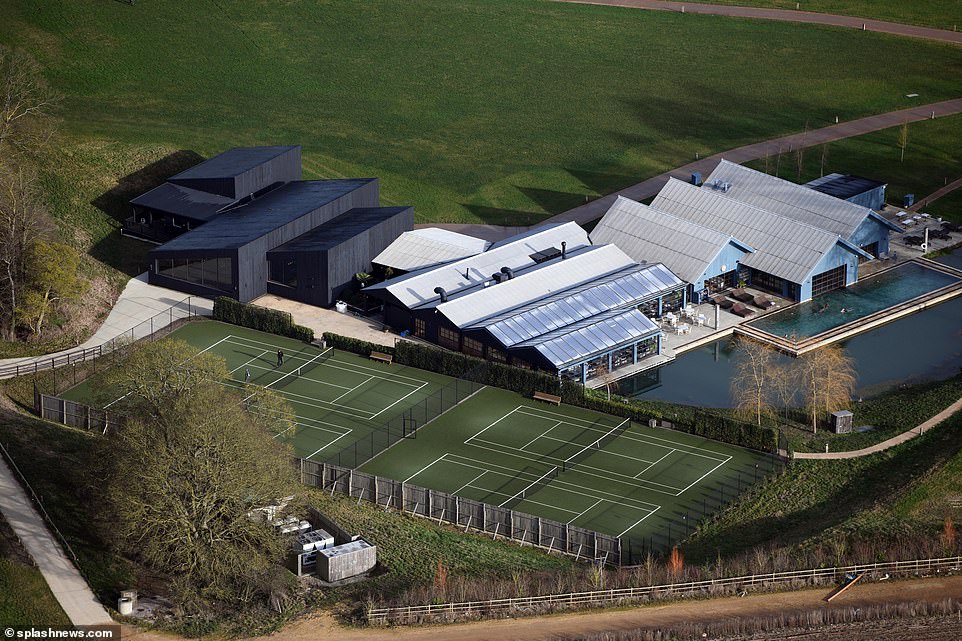 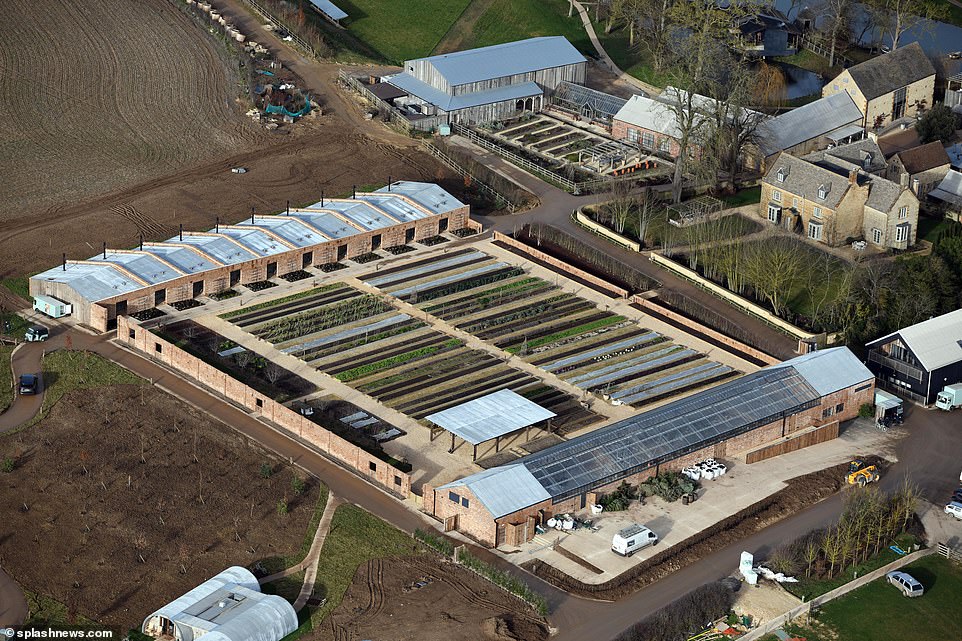 The sprawling Soho Farmhouse estate has a wide range of accommodation and has hosted countless celebrities from Meghan and her friends on her hen do, to David and Samantha Cameron to the socialite Delevingne sisters 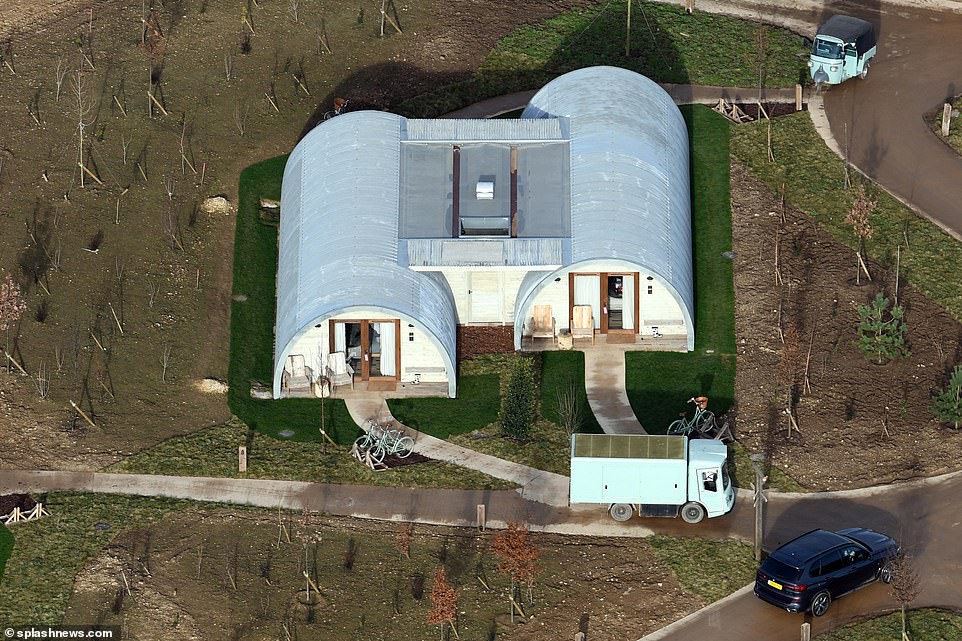 Meghan is believed to have stayed at Soho Farmhouse twice with her husband Prince Harry and with her mother and friends for her hen party. Pictured is one of the piglet cabins complete with outdoor patio and bikes parked outside 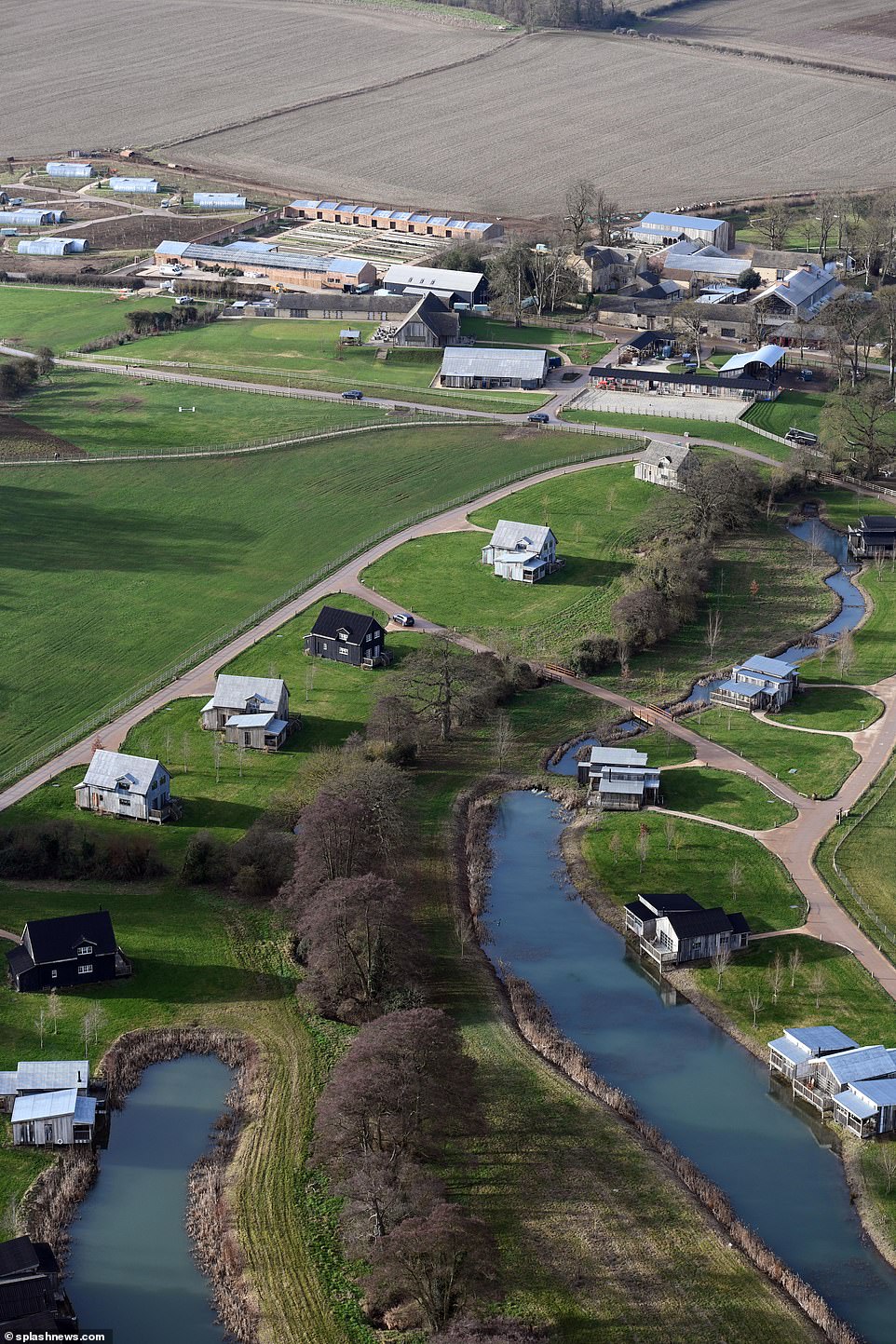 An aerial image shows the scale of Soho Farmhouse’s luxury Cotswold estate, with an artificial river and lake running through it

Soho House membership is £1,200 with an additional £200 registration fee. While it is open to non-members, it is almost permanently booked out, with the seven-bedroom cottage particularly popular as a 40th birthday destination.

The original Soho House was opened in 1995 in London by Nick Jones, who is married to TV and radio presenter Kirsty Young.

It began as a private members’ club for the film, media and creative industries and has since expanded across the globe. 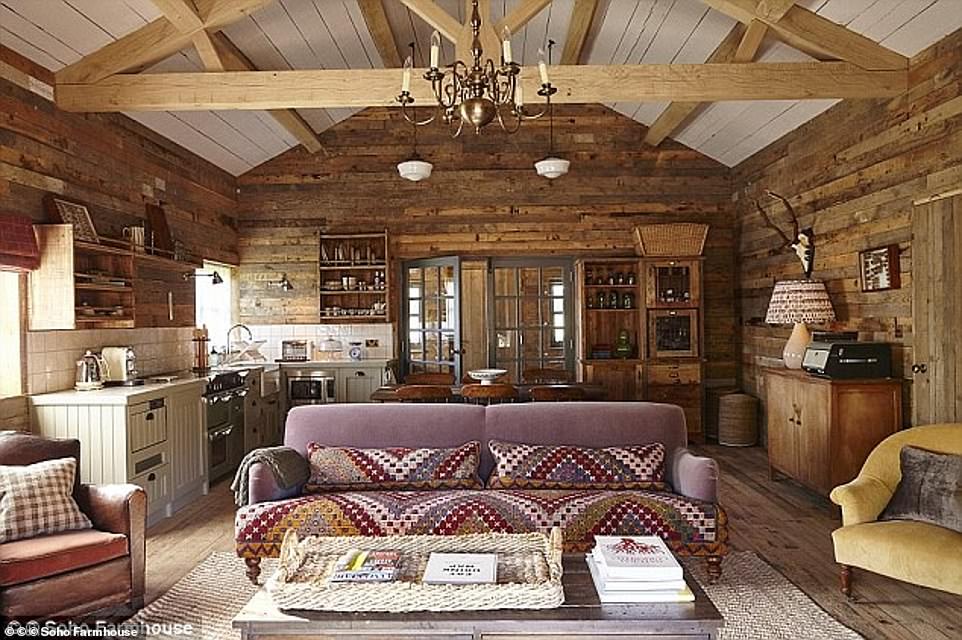 This is the view from inside one of the wooden cabins on the Soho Farmhouse Oxfordshire estate. It is kitted out with rustic textiles and quirky features like an old radio and reindeer head 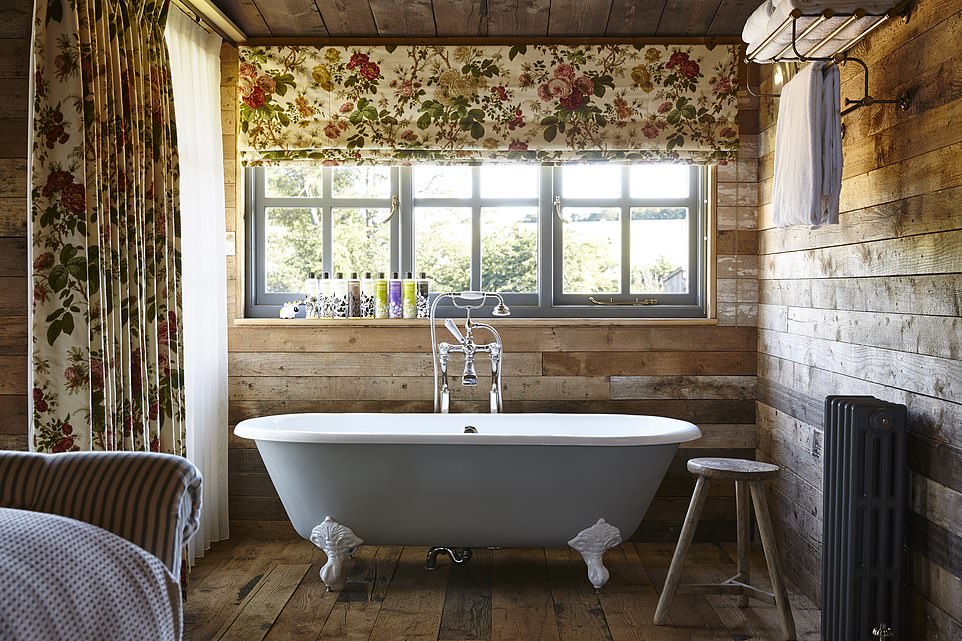 A bath fit for a Duchess: One of the outdoor wooden cabins features a roll top bath in the same room as the king-sized bed 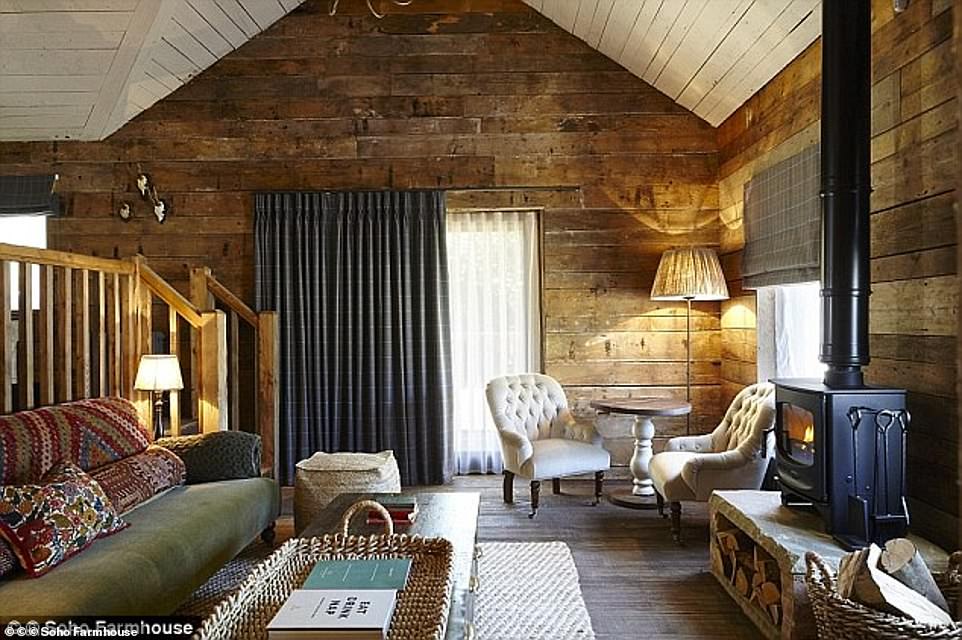 Another room in one of the larger cabins features a wood-burning fire, large sofa and a selection of high-end coffee table books for guests to browse when they are not in the spa, cinema or restaurant 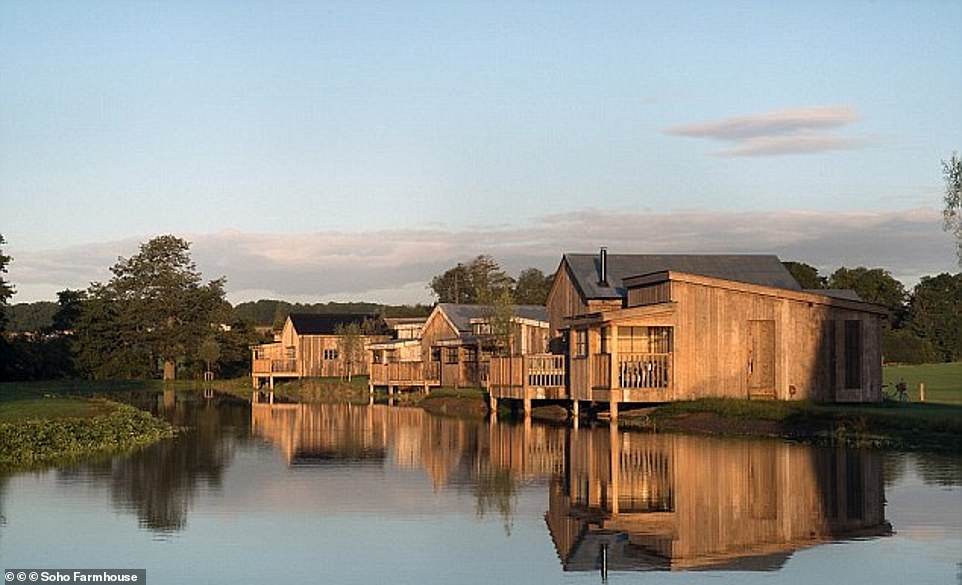 Secluded: Some of the larger wooden cabins sit at the side of a river, with guests able to dine out on their waterside balconies