Washington: In a warm shallow sea about 240 million years ago in what is now south-western China, a large dolphin-like marine reptile attacked and swallowed an almost equally big lizard-like marine reptile in a savage encounter that left both beasts dead.

Scientists on Thursday described a fossil unearthed in China's Guizhou Province that reveals this Triassic Period drama in exceptional detail and changes the understanding of "megapredation" in prehistoric seas. 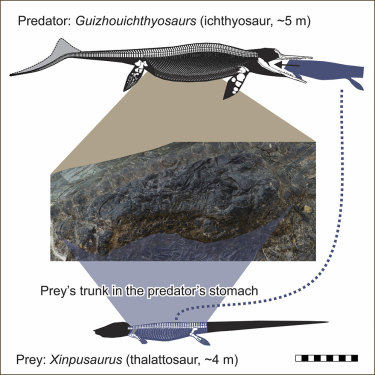 The Guizhouichthyosaurus dolphin-like marine reptile found in China with almost as large prey in its stomach. Credit:iScience

While it long has been presumed that large apex predators preyed upon other big animals – megapredation is defined as feeding on prey of human size or larger – the Chinese fossil represents the first direct evidence of it, as demonstrated by a prehistoric animal's stomach contents.

The fossil shows the skeleton of a five-metre-long Guizhouichthyosaurus, a type of marine reptile called an ichthyosaur. Its body design married elements of a dolphin and a tiger shark though it lacked a dorsal fin, also boasting four strong flippers and a mouth full of powerful but blunt teeth.

Inside its stomach was the torso of a 1four-metre-long Xinpusaurus, a type of marine reptile called thalattosaur. Its body design resembled a komodo dragon with four paddling limbs and teeth equipped for crushing shells. The Xinpusaurus was beheaded in the melee and its tail severed. 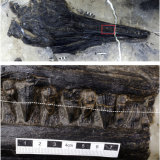 "Nobody was there to film it," but it is possible to interpret what may have occurred between the two animals, said palaeobiologist and study co-author Ryosuke Motani of the University of California, Davis.

The Guizhouichthyosaurus literally may have bitten off more than it could chew.

"The prey is lighter than the predator but its resistance must have been fierce," Motani said. "The predator probably damaged its neck to some extent while subduing the prey. Then it took the head and tail of the prey off through jerking and twisting, and swallowed the trunk using inertia and gravity."

Motani added, "These activities may have expanded the damage of the neck to the point it was fatal. The neck vertebral columns of these ichthyosaurs are quite narrow and once they could not hold the skull in place anymore, the predator could not breathe. Soon, it died not far from the site of the predation, where the detached tail of the prey lay."

The fossil bore evidence of this broken neck. The prey in the stomach showed little signs of digestion, indicating the ichthyosaur died soon after swallowing it.

It is among the more dramatic fossils on record, joining others such as one showing the Cretaceous Period dinosaurs Velociraptor and Protoceratops locked in combat and another of the large Cretaceous fish Xiphactinus that had swallowed whole another sizeable fish.

Guizhouichthyosaurus was the largest-known marine predator of its time, about 10 million years before dinosaurs appeared. Its teeth, however, were not the type thought to be needed for megapredation: blunt rather than having cutting edges for slicing flesh.

"Its teeth look like they are good for grasping squids. So, it was a surprise to find such large prey," said Peking University palaeontologist Da-Yong Jiang, lead author of the research published in the journal iScience.

"Megapredation," Motani said, "was probably more common than we used to think."