More than 3 million people in the United States have active coronavirus infections and are potentially contagious, according to a new estimate from infectious-disease experts tracking the pandemic. That number is significantly larger than the official case count, which is based solely on those who have tested positive for the virus.

The vast – and rapidly growing – pool of coronavirus-infected people poses a daunting challenge to governors and mayors in hard-hit communities who are trying to arrest the surge in cases. 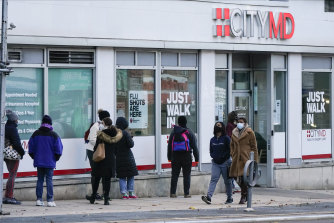 People line up outside a medical clinic for coronavirus tests in the Brooklyn borough of New York this week.Credit:AP

Traditional efforts such as testing, isolation of the sick and contact tracing can be overwhelmed when a virus spreads at an exponential rate, especially when large numbers of asymptomatic people may be walking around without even knowing they are infectious.

To put the 3 million-plus figure in perspective: It is close to 1 per cent of the population. It is about equal to the number of public school teachers in the country, or the number of truck drivers. If the University of Michigan's football stadium were packed with a random selection of Americans, about a thousand of them would be contagious right now.

Columbia University epidemiologist Jeffrey Shaman said his team's model estimated that 3.6 million people are infected and shedding enough virus to infect others. That's a 34 percent week-to-week increase that followed a 36 per cent increase in the previous seven-day average, he said.

The estimate does not include an approximately equal number of latent infections among people who caught the virus in recent days and can't pass it on yet because it is still incubating.

"It's bad; it's really, really bad," Shaman said. "We're running into Thanksgiving now and that's only going to make it worse. We're going to go through a lot of people being infected between now and the end of the year, unfortunately."

Separately, modellers at the University of Washington's Institute for Health Metrics and Evaluation estimated on Tuesday that approximately 3.2 million people have been infected just since election day on November 3, a figure significantly larger than the approximately 1.95 million official cases tracked over the same period by The Washington Post through reports from state health departments.

The IHME model forecasts continued daily increases for a month and a half, estimating that 245,000 people would become newly infected on Tuesday alone.

"When do you want to hit the brakes? That's the question," said Ali Mokdad, an epidemiologist at IHME who is among many scientists and doctors urging action by the government and general public to reverse the trend lines.

"When you have a fire, you send the firetruck. You don't wait and say, 'OK, let me wait a little bit, maybe that fire isn't going to spread that much' … We already moved into exponential growth. Just hit the brakes as soon as you can."

This autumn wave of infections and hospitalisations is different in several ways from the one in the spring. The outbreaks are widespread now, with 49 states showing rising coronavirus hospitalisations, in contrast to the spring's concentration of cases in the north-east and a few large cities. Doctors are better at treating severe cases of COVID-19, the disease caused by the virus, and so it is less likely to be fatal.

But the biggest difference is that this autumn wave is still swelling, and is probably many weeks from cresting. This pandemic is following the seasonal pattern of the 1918 influenza pandemic, the worst such plague in US history, in which the autumn wave was worse than the first one in the spring of that year. Even after more than 11 million confirmed infections since early in the year, more than 8 in 10 people in the US remain susceptible to the coronavirus, experts estimate. 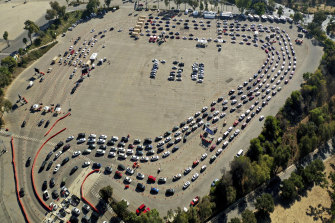 Drivers queue at a COVID-19 testing site in a parking lot at Dodger Stadium in Los Angeles this week.Credit:AP

President Donald Trump, who refuses to concede that he lost the election, remains the point man for a largely hands-off approach to the contagion. Trump has embraced the view of his adviser Scott Atlas, a radiologist, that it is better to focus on protections for highly vulnerable people and otherwise allow the virus to spread among the rest of the population to hasten herd immunity.

The nation's leading infectious-disease experts say that strategy will lead to many tens of thousands of avoidable deaths because it is impossible to separate the most vulnerable from the rest of society.

"This nonsense of herd immunity means we give up," Mokdad said. "It's unethical. It means we let people die. That's not acceptable."

On Sunday, Atlas took to Twitter to urge residents in Michigan to "rise up" against Democratic Governor Gretchen Whitmer's new restrictions designed to control the contagion. Many Trump supporters have also bought into his argument that the pandemic has been exaggerated by the news media and scientists as a way of hurting his reelection chances.

Before the election, Trump predicted that news coverage of the pandemic would end on November 4. The opposite has been true – the pandemic remains on the front pages of newspapers and leads the nightly news broadcasts. But the cultural divide remains, with the wearing or non-wearing of masks seen as a political identifier.

The current strategy in many states – patchwork restrictions, combined with widespread public disregard of public health guidelines – portends a brutal winter for the country in which hospitals could be strained to their limits or beyond, something that is already happening in the Dakotas and other communities of the Upper Midwest and Great Plains, as well as El Paso.

"We're getting the herd immunity strategy whether we want it or not," said Andrew Noymer, an epidemiologist at the University of California at Irvine. "We have a totally out-of-control epidemic and we are taking baby steps."

The only period comparable to the current one in terms of the size of the infected cohort was in late March and early April. Tests were hard to come by early in the pandemic. Robert Redfield, director of the Centres for Disease Control and Prevention, estimated that the number of infected people was 10 times the official count.

Now the multiplier is surely lower – the model developed by Columbia University researchers uses 5.5. By that measure, as many as 10 million people in the US have been infected in the past two weeks.

Researchers at IHME estimate the number of daily new infections by working backward from the known numbers of deaths. The institute relies on an estimated infection fatality rate of 0.6 per cent across all populations, Mokdad said.

These are models, and they rely on a series of assumptions about a virus for which much remains unknown – including how long, exactly, a person who is infected will remain contagious.

But the big picture is clear.

Get our Coronavirus Update newsletter for the day’s crucial developments and the numbers you need to know. Sign up to The Sydney Morning Herald’s newsletter here and The Age’s here.