Rakhine migrants move to parts of Rakhine State ‘cleared’ of Rohingya as part of plan to establish ‘Muslim dry’ zones. 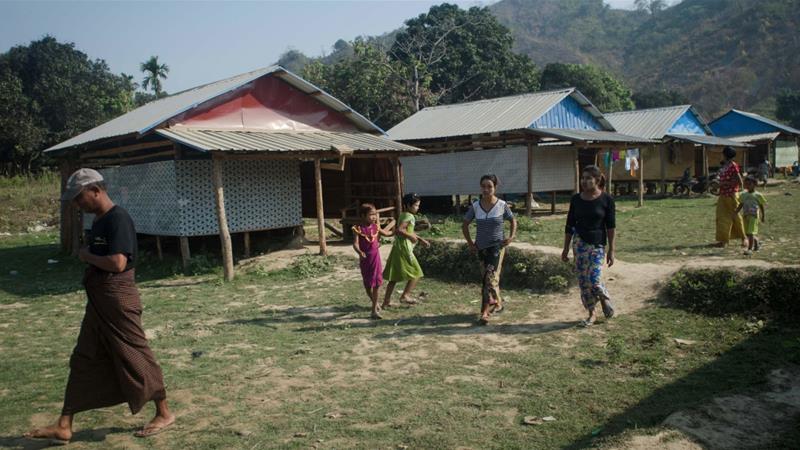 Buddhist flags hang limply from bamboo poles at the entrance to Koe Tan Kauk, a “model” village for ethnic Rakhine migrants shuttled north to repopulate an area once dominated by Muslim-majority Rohingya.

The new arrivals are moving to parts of Rakhine state mostly “cleared” of its Rohingya residents, whose villages were bulldozed and reduced to muddy stains on a landscape of lush farmland.

The Rakhine migrants, who come from the poor but relatively stable south, are – for now – few in number.

But they carry great expectations as the pioneers of a donor-led “Rakhinisation” plan to upend the demography of the once majority-Muslim area.

“We were really afraid of those Kalars and didn’t plan to come here,” Chit San Eain, a 28 year old who has moved with her husband and toddler into a basic hut in Koe Tan Kauk told AFP news agency, using a pejorative term for Muslims.

“But now that they are no longer here, we have the chance to meet again with our relatives who live up here,” she added, the ruins of a Rohingya settlement lying a few kilometres away.

Nearly 700,000 Rohingya have been driven from northern Rakhine into Bangladesh since August 25 last year by the Myanmar army, which has used attacks by armed Rohingya fighters as a pretext for its brutal campaign.

Another 300,000 Rohingya were pushed out from the south and centre of Rakhine by army campaigns stretching back to the late 1970s.

The UN has branded last year’s military crackdown as ethnic cleansing, with a top official saying it carried all the “hallmarks of genocide”.

Myanmar vigorously denies the allegations and says refugees are welcome to return.

But so far it has agreed to allow back only 374 of 8,000 refugees whose names have been put forward for the initial phase of repatriation.

Many traumatised Rohingya in Cox’s Bazar camps are also refusing to be repatriated to Rakhine – where holding camps and hostile neighbours await them.

In their absence a blizzard of development projects, government and army-sponsored or privately funded, are transforming northern Rakhine. 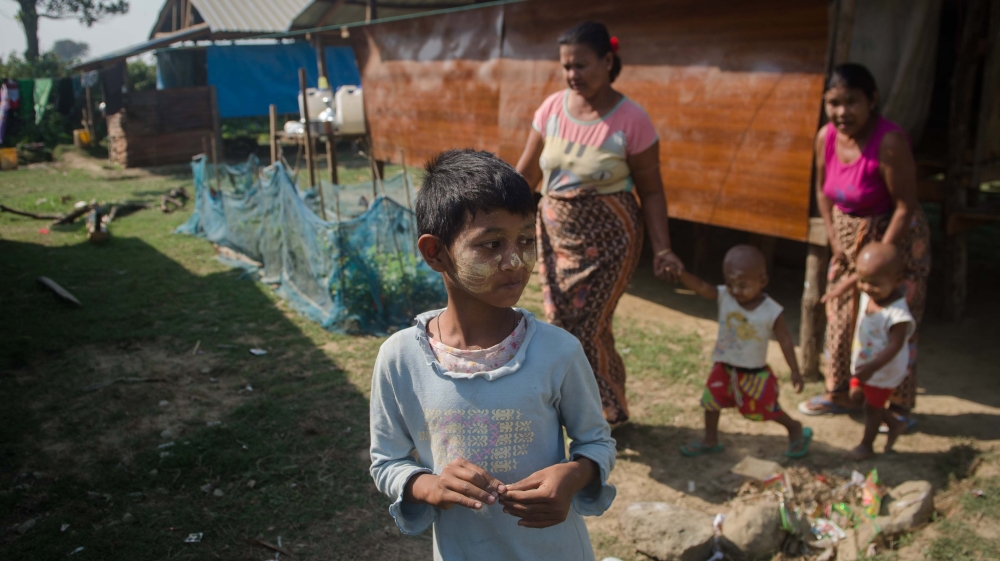 Taking space vacated by fleeing Rohingya is an old game in a state seen as the front line of a Buddhist nation’s fight against encroaching Islam.

“The military has been engineering the social landscape of northern Rakhine State so as to dilute the Rohingya population since the early 1990s,” says Francis Wade, author of Myanmar’s Enemy Within: Buddhist Violence and the Making of the Muslim ‘Other’.

The Muslim minority are denied citizenship and labelled “Bengalis”, outsiders who – the logic runs – have successfully been pushed back to their country of origin.

In a pattern with echoes of “the Israeli settler project in the West Bank” Buddhist communities then move in, altering the “facts on the ground” gradually rubbing out Muslim rights to the land, he added.

“I’d expect to see more Buddhists settle there over the coming years. And then we’ll forget what the area once was, and that process of erasure will be complete.”

Rohingya out, Rakhine in

Chit San Ean is the beneficiary of the Ancillary Committee for the Reconstruction of Rakhine National Territory in the Western Frontier (CRR), a private scheme established shortly after the refugee crisis began.

In a zone under a strict army lockdown the resettlement plan could not fly without military consent.

Funded by ethnic Rakhine donors, the CRR’s ambition is to establish a “Muslim-dry” buffer zone running the nearly 100km from state capital Sittwe to Maungdaw town, according to Oo Hla Saw, a Rakhine MP who advises the committee.

“All of this area was under the influence of Muslims. After the military operations, they had to flee … so we have to establish this area with the Rakhine population,” he told AFP.

The CRR will fund jobs and homes “so this little population can grow and grow,” he added.

They are among the poorest of the poor, mostly daily wage labourers from Thandwe around 600km to the south or squatters from Sittwe.

Two village tracts, Koe Tan Kuak near Rathedaung and Inn Din near Maungdaw, have been designated for the scheme so far.

The army concedes the second site was the scene of extrajudicial killings of Rohingya captives as violence engulfed the region last August.

Koe Tan Kauk was a similarly mixed settlement of Buddhist and Muslim homes. 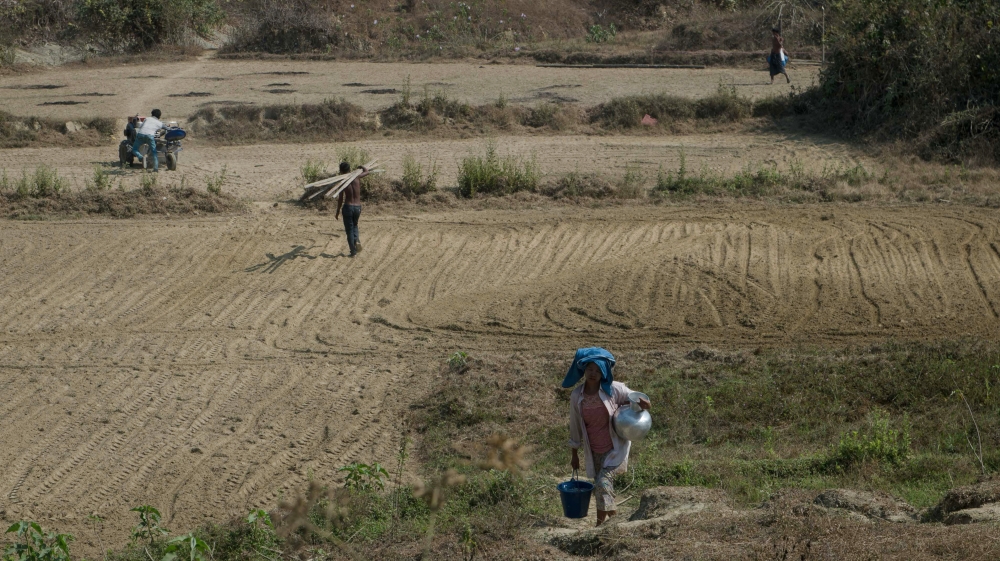 There is little work, no electricity or running water but donors have gifted each family a $450 shack on stilts, made from plywood and metal sheeting.

New residents hope to eventually own land, a prospect previously beyond their reach in Myanmar’s second-poorest state.

Rakhine nationalists say the CRR is a bulwark against Islam and a means to ensure their ethnic group has a say in development projects driven by the Burmese-dominated central state, who they distrust deeply.

“Who should be given priority other than Rakhines in Rakhine State?” explained Than Tun, General Secretary of the CRR.

For its part, Myanmar’s government has enlisted powerful businessmen to rebuild the infrastructure of the battered state.

The army is running other projects including beefing up its security apparatus – in what appears to be a multi-pronged effort to keep out the Rohingya.

An Amnesty International report this week detailed how roads, helipads and security installations are being built, often on top of razed Rohingya settlements.

They labelled the activity a massive “land grab” that threatens to erase evidence of alleged atrocities, including at Inn Din.

Across northern Rakhine, abandoned land and rice fields have been commandeered by the army in an area with access tightly controlled to media, investigators and most aid groups.

The Rohingya lost their legal status in 1982, under a junta-era Citizenship Law. Now their ancestral lands are being stripped away.

That makes return impossible, according to legislator Oo Hla Saw.

“These people want to be recognised as ‘Rohingya’ ethnicity … to enjoy citizenship, to resettle in their native grounds,” he says. “Their demands are unreasonable.”

Despite their dangerous new neighbourhood, the arrivals at Koe Tan Kauk say they are there to stay.

“I will end my life here,” said a 69-year-old woman called Osar. “I’m not going anywhere.”