Every January in the small Spanish town of San Bartolome de Pinares, daring locals ride their horses through bonfires in a five hundred-year-old festival known as Las Luminarias.

The tradition is a nod to the patron saint of animals, Saint Anthony, and takes place every year on the eve of his feast day – January 16. The fire and smoke is believed to help purify the horses and protect them from disease in the coming year.

Incredible photographs show the masked riders making their way through a series of blazing bonfires in the town’s narrow streets. The riders steer their horses into the flames as part of a jumping tradition that lasts until midnight, but the drinking and celebrating continues until dawn.

The horses are doused with water just before they enter the flames to prevent their coats from singeing, and villagers maintain that the animals are used to it and do not suffer.

But animal rights groups have long been critical of the event, which they say is ‘clear animal abuse’. Last year the town’s mayor hit back, saying that two vets are onsite and each year an independent report on the festival is produced, which has always been favourable.

The exact origin of the Las Luminarias, which dates back to the middle ages, is unknown, though it is thought to have began at a time when animals were contracting unexplained illnesses and dying in huge numbers. 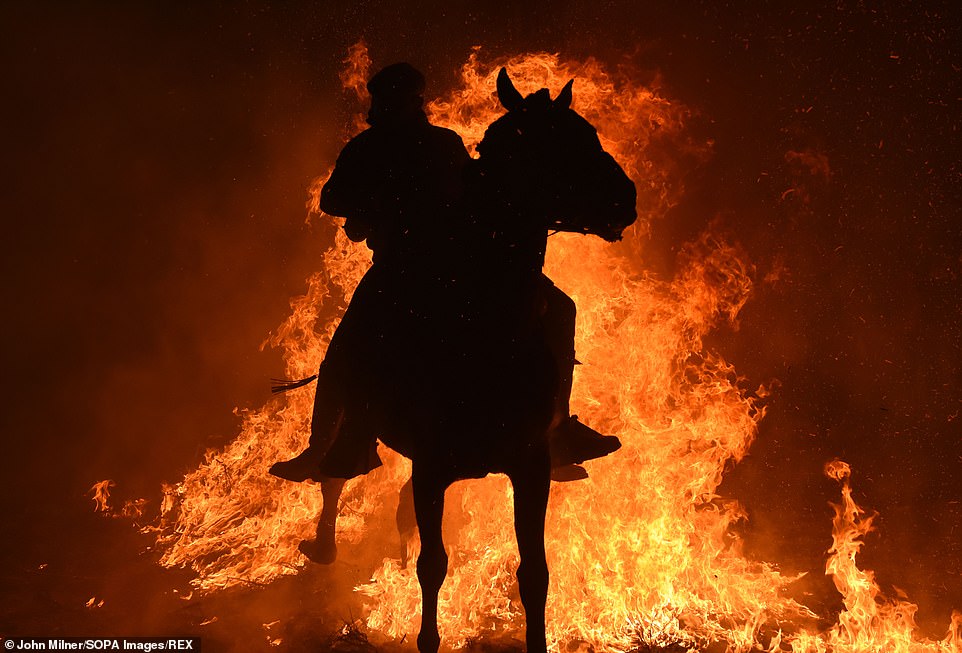 The silhouette of a man on horseback as he rides through a bonfire on the eve of Saint Anthony’s day as part of Las Luminarias Ritual in San Bartolome de Pinares, Spain 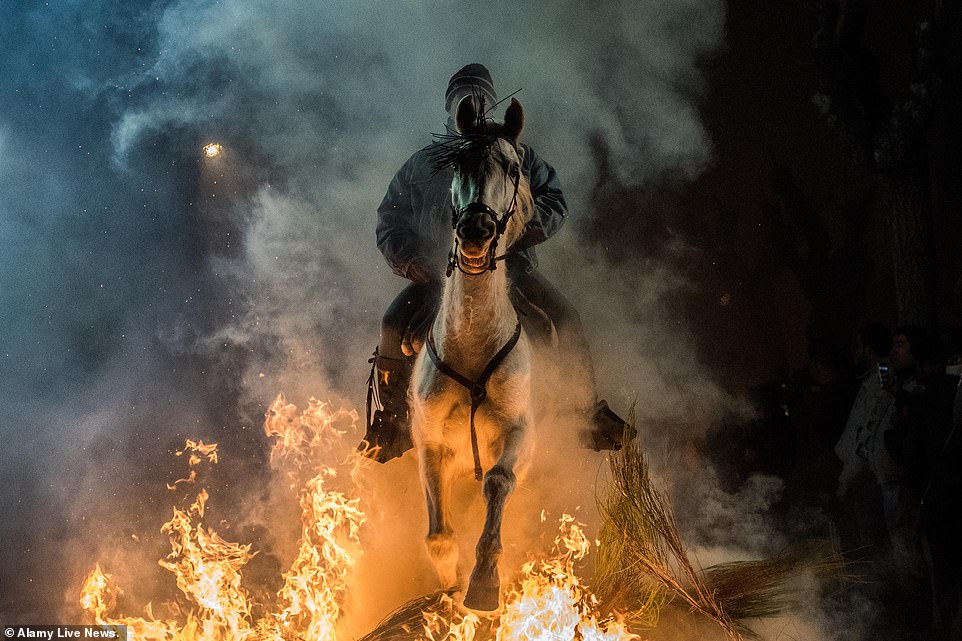 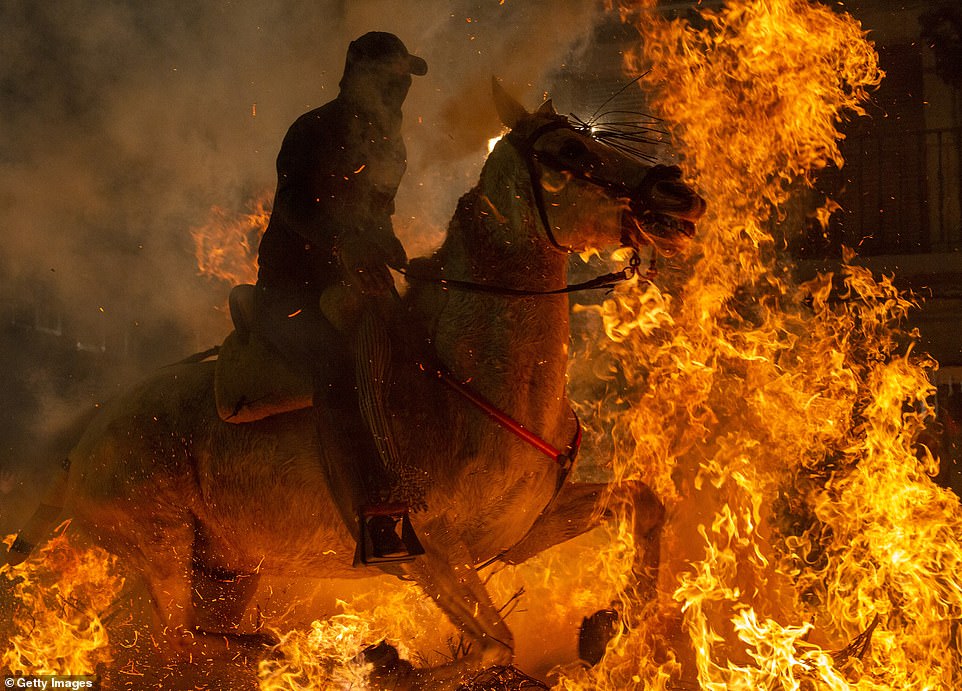 The traditional festival, which is hundreds of years old, is meant to purify and protect the animal from illnesses in the coming year 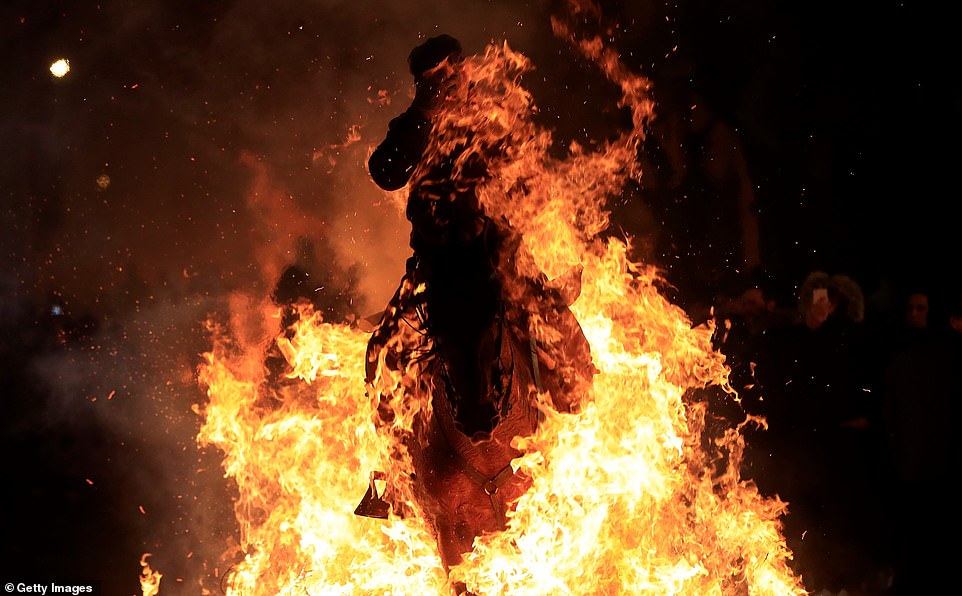 A man rides his horse through bonfire made with pine tree branches after horses were blessed by a priest in order to protect and purify them for the year ahead, during the annual ‘Las Luminarias’ festival 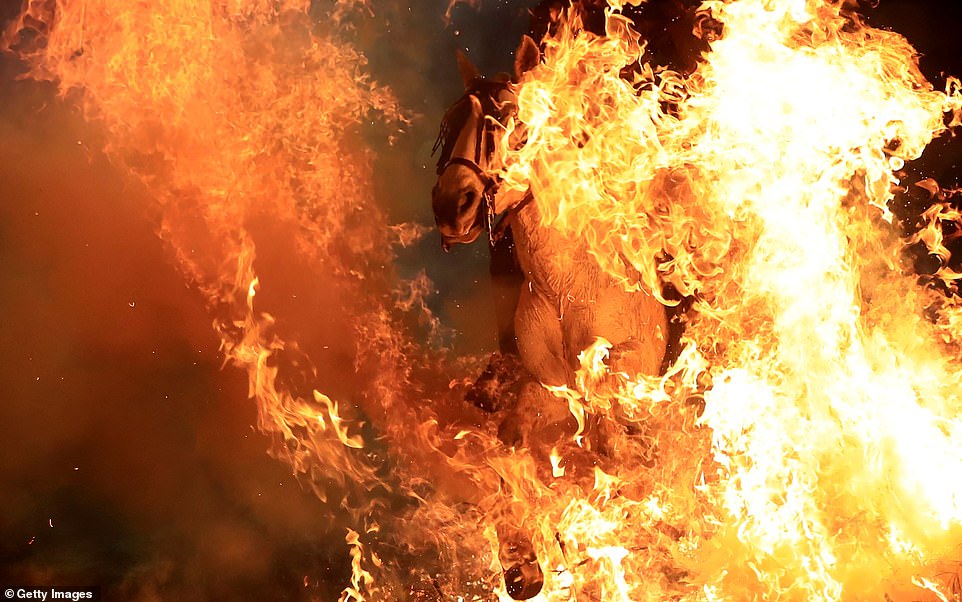 Animal rights activists have raised objects to the festival, but participants say the animals are doused with water before jumping through the flames and do not suffer 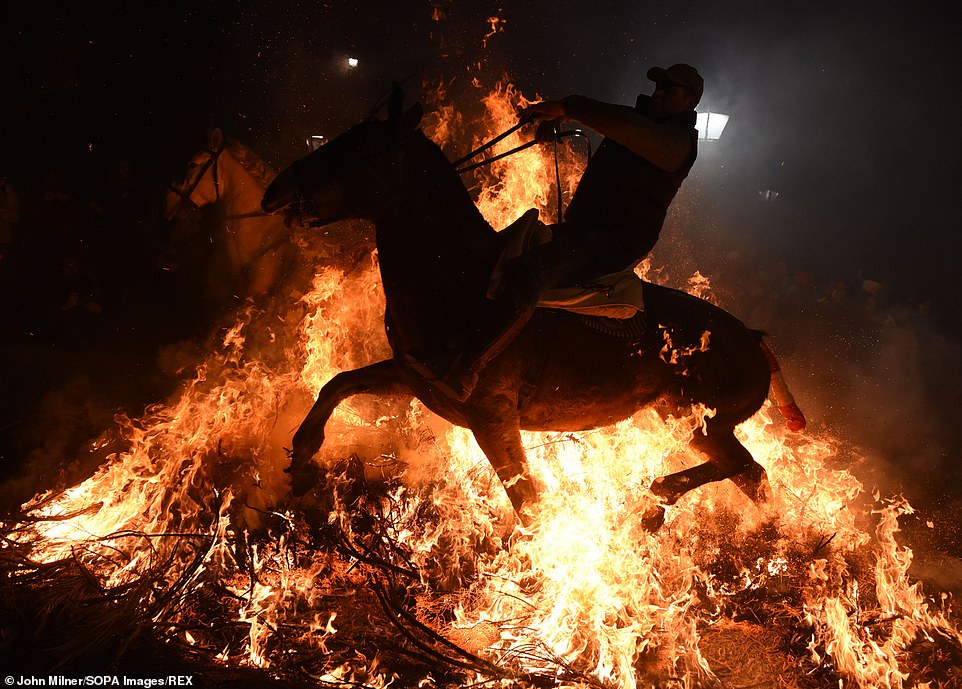 The festival, which dates back to the middle ages it is thought to have started as a superstitious ritual that began at a time when animals were contracting unexplained illnesses 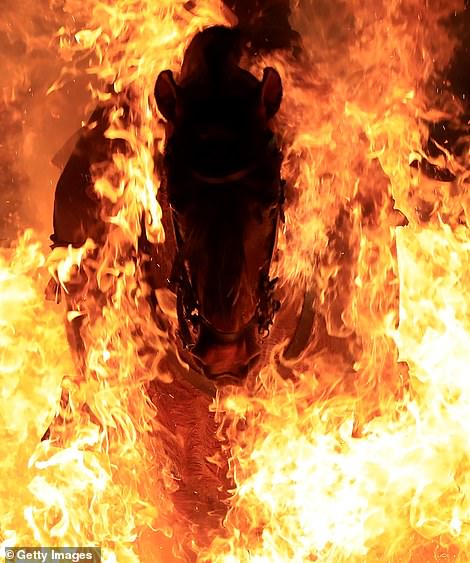 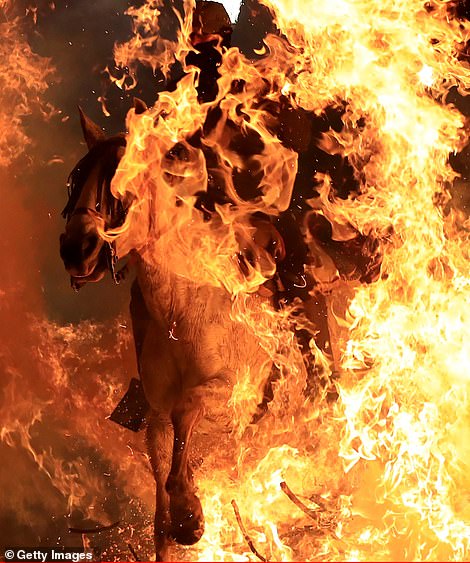 The festival, dubbed Las Luminarias, takes place every January in the town of San Bartolome de Pinares, northwest of Madrid 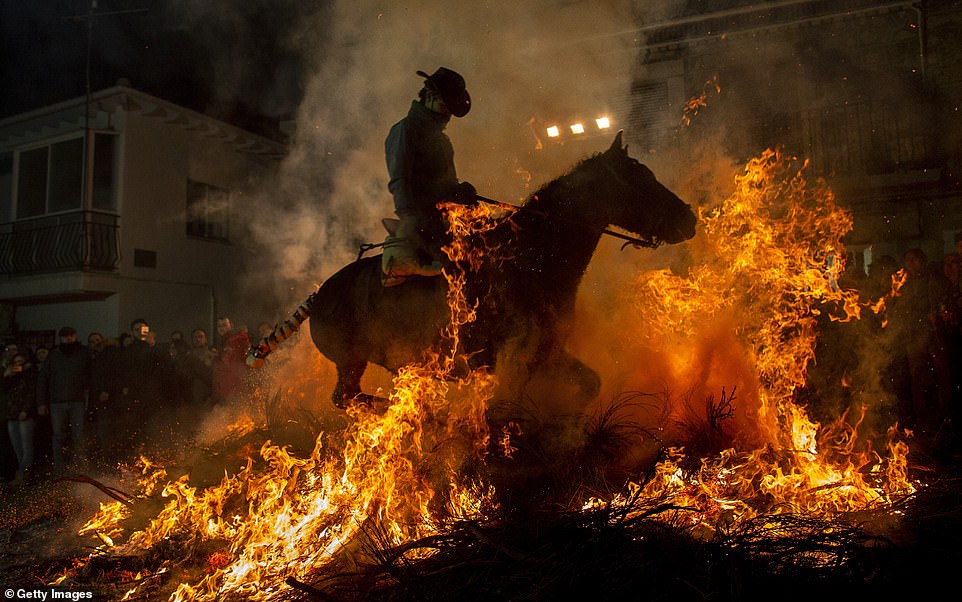 The horse’s tail in covered to prevent it catching fire as it rides through specially-constructed bonfires laid by townspeople for the ‘Las Luminarias’ Festival on January 16, 2019 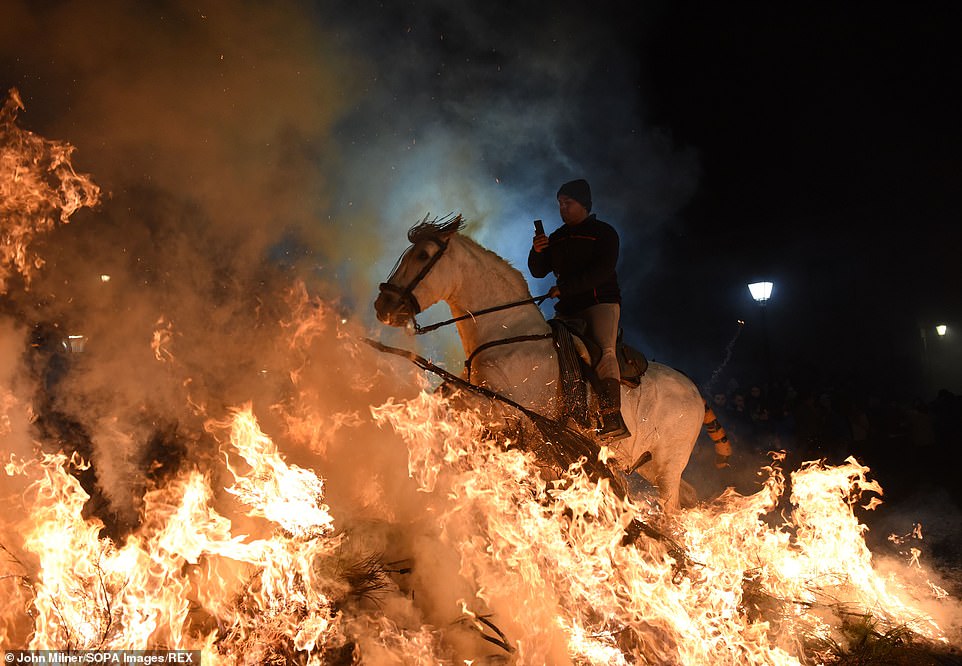 A man rides a horse through a bonfire as part of a ritual in honor of Saint Anthony the Abbot, the patron Saint of domestic animals 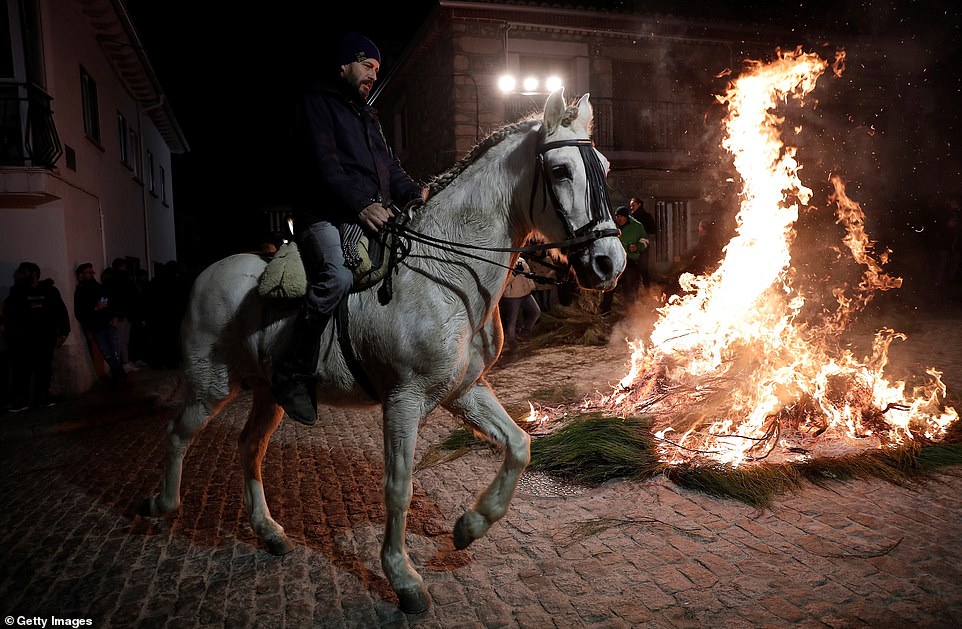 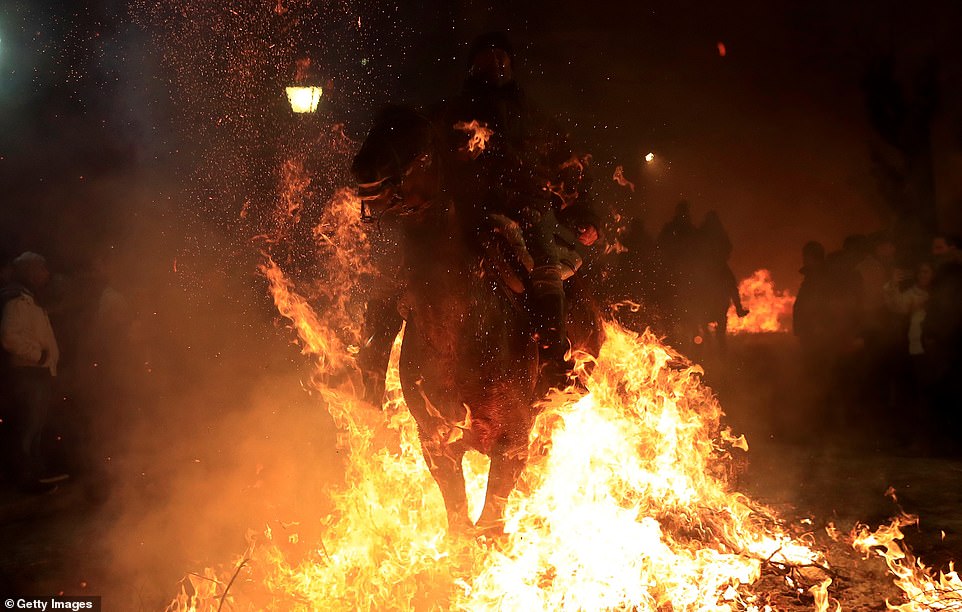 The government of Castilla and Leon assign a vet and the City Hall hires another one, who makes rounds throughout the village during the festival to ensure the animals are safe and healthy 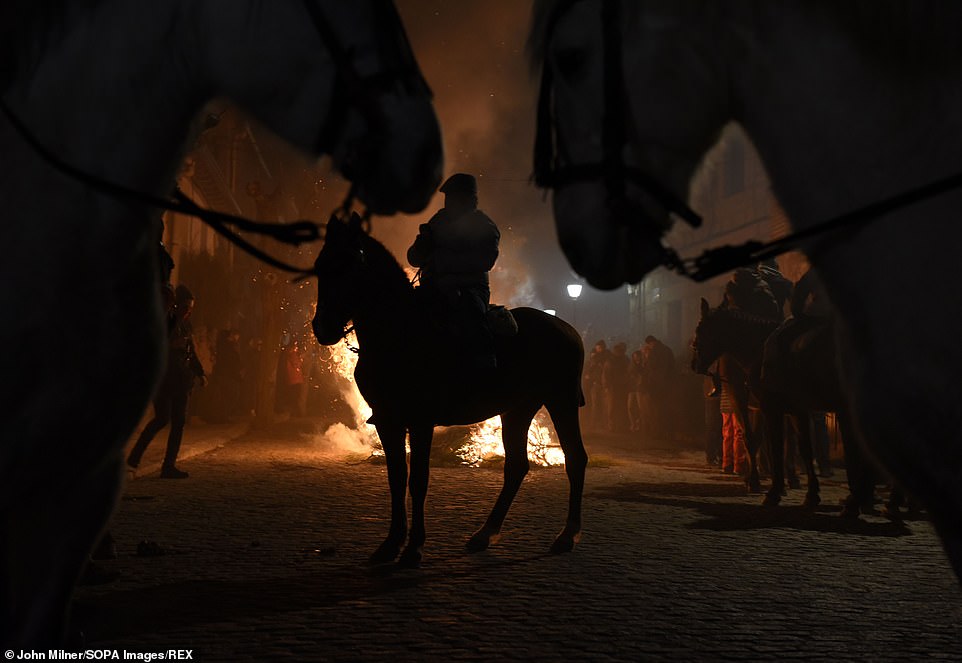 A man wait his turn to rides a horse through a bonfire as part of the ritual in honor of Saint Anthony the Abbot, the patron saint of domestic animals, in San Bartolome de Pinares, Spain 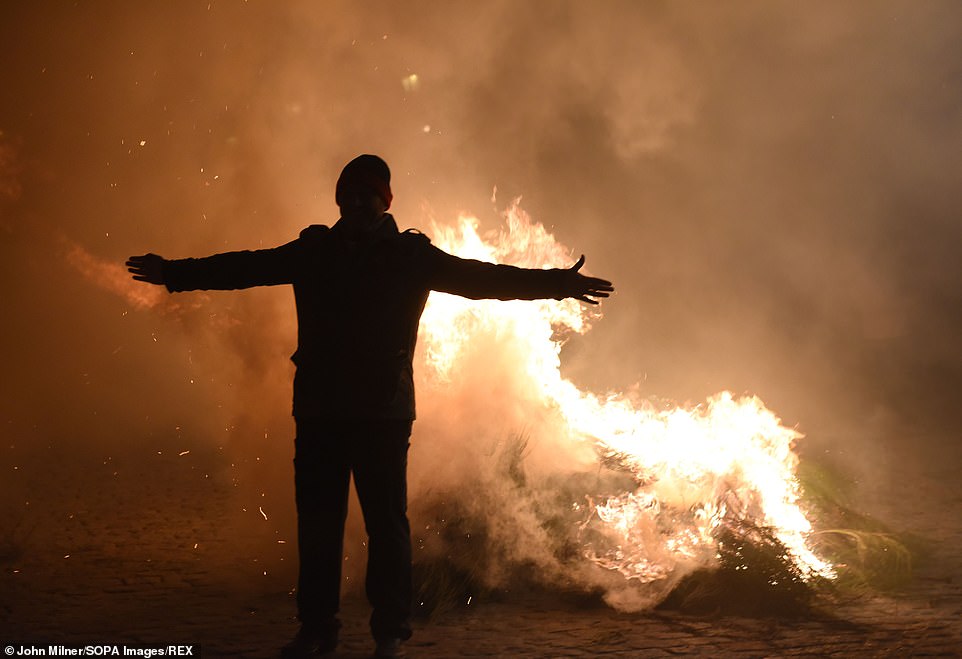 A man poses for a picture during the opening of the traditional Christian religious festival ‘Las Luminarias’, on January 16 – the eve of Saint Anthony’s feast day 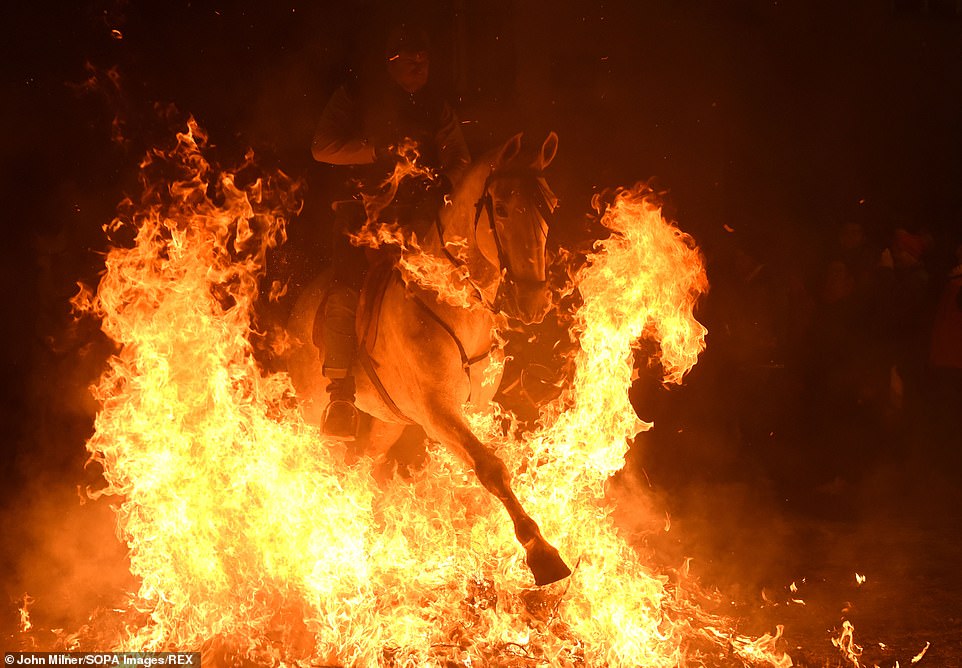 Animal rights groups have called said the event is abusive to the animals, but its organisers disagree, citing on site vets and independent reports produced each year 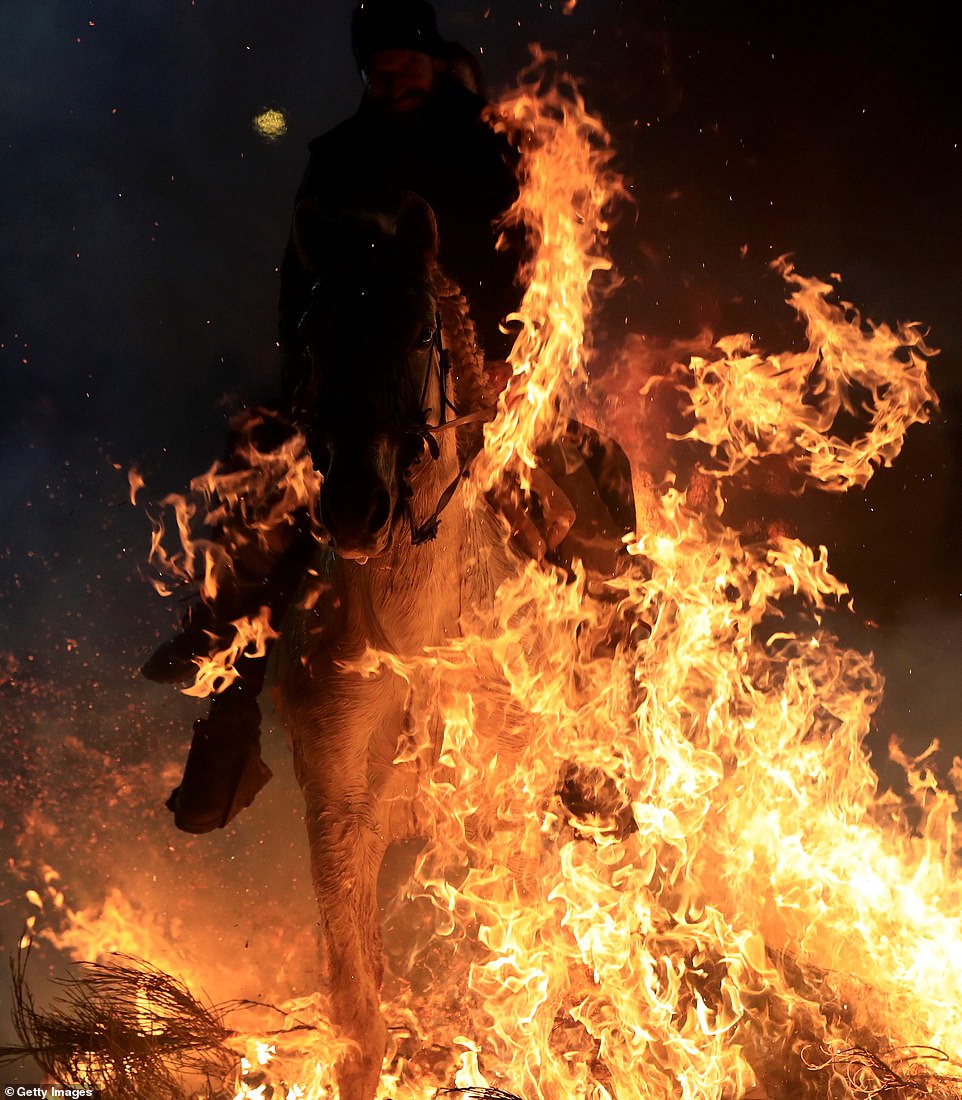