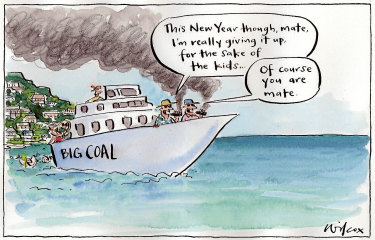 To submit a letter to The Age, email letters@theage.com.au. Please include your home address and telephone number.

There is much to support in Jeff Kennett’s views on a national inquiry into Australia’s performance during the coronavirus pandemic (‘‘Virus royal commission has much to recommend it’’, 30/12 ). Kennett’s view that an ‘‘educative’’ inquiry is needed because there could be another crisis in the future and lessons needed to be learnt may well be prescient.

If a royal commission or other inquiry is eventually held, its chair and counsels assisting need to be independent and of the highest quality. The inquiry should have a no-blame culture and as Kennett says, an educative focus, learning from both the things which were done poorly as well as the things which were done well and the inquiry’s outcomes should produce templates for nationally co-ordinated disaster plans, border closures, testing regimens, isolation criteria etc which various authorities, bodies and governments could adopt.
George Greenberg, Malvern

Federal responsibility
Ah, the irony (‘‘Farmers’ crop hopes wilt in hot air between MPs’’, 30/12). The Morrison government has spent almost the entire year avoiding responsibility for practically everything (COVID-19, aged care, border control, quarantine, robo-debt, rorts and scandals to name a few). For Minister Littleproud to try and blame the Andrews government for issues regarding farm labour is ridiculous.
If the Morrison government had taken responsibility for border control and quarantine as they should have then the farm labour issues would be entirely in their control to solve. But, they instead shoved these federal responsibilities onto the states and are now left in the embarrassing situation of having to plead with the states to solve problems that were entirely avoidable.
Ross Hudson, Mount Martha

Logistics on farm
Our family market gardening business at Bacchus Marsh employed two workers to grow and pick crops on 26 acres of land from 1960-1975. It never made much money, but we lived a simple life, and nothing went to waste. Big agricultural businesses with itinerant workers risk a lot when logistics break down.
Andrew Smith, Leongatha

Strong leadership call
We have learnt that strong government action is what is needed in a crisis. Now we are facing an even bigger one as climate change hits our lives and economy across the world. We showed the way with COVID-19. Let’s do it with our fossil fuel based economy with strong government leadership. Has to be done, and our leaders, informed by experts, are key – as we now know.
Carolyn Ingvarson, Canterbury

More bike pain
I am shocked to see the Jump e-bikes around the City of Port Phillip. They are causing the same problems as the yellow bikes. Recently I parked my car at the Palais car park and was appalled to see one bike standing across a parking place, another on the path obstructing pedestrians and another two on footpaths.

Weighing 30 kilograms one is unlikely to be able to move them aside. They are dangerous, obstructing pedestrians, take up car parking space, are an eyesore and a blot on the environment.
Irene Ritchie, Balaclava

Message is clear
How is it that millions of Australians, 9000 VALE (vets against live exports) and the RSPCA all demand the live sheep export trade be banned and yet the industry just keeps on keeping on. Caring about animal welfare is simple decency or a lack of it.

Politicians’ first duty is to listen to the people who gave them a mandate, and their message is loud and clear. Ban the live sheep export trade.

This is a horrific industry that doesn’t care about animal welfare, only money.
Future generations will view this period as our darkest hour of animal cruelty.
Anne Leeson, Willetton, WA

Level of JobSeeker
The economists who call for the federal government to permanently increase unemployment benefits are quite right. Should JobSeeker payments revert to their pre-COVID-19 level – below the poverty line – the unemployed will find it difficult, or impossible, to dress for and attend job interviews, or provide adequate healthy food for their families and/or themselves.

Engage and then vote
I totally agree with Peter Thomson (Letters, 30/12) that we must continue to engage, engage, engage to keep refugees and climate change issues alive while our government continues to ignore them.
And most importantly, when the time comes to exercise our democratic right, we must remember to vote, vote, vote for the right people to implement these long-awaited policies.
Vivienne Fry, Beaumaris

Assange decision
The verdict of Julian Assange’s extradition trial will be announced on January 4. Press freedom hangs in the balance.

Where is the outrage, the indignation, the analysis of the rights and wrongs of the case? Where is the rebuttal of Peter Greste’s erroneous assertion that Assange is not a reporter? Since when is someone who reports the truth in the public interest not a reporter?
Paul Spencer, Ascot Vale

Absence of empathy
The planned cuts to JobSeeker and welfare payments of $205 million a fortnight show the federal government and the Treasurer, Josh Frydenberg, really have absolutely no empathy for low-income people.

Margaret Thatcher’s massive cuts to welfare spending in Britain threw millions of people into poverty. Tax rates for the rich were also reduced. In response, the British economy performed only moderately during this time. Thatcherism failed because growth in welfare and public sector spending is essential to sustain a modern economy dependent on strong aggregate demand.

Without some empathy behind economic policy we are likely to only see more growth in inequality and poverty with cyclical contractions in aggregate demand.
John Glazebrook, Jan Juc

Embrace diversity
If we lived in a perfect world, then plainly the duplication, inconsistent policies and other matters referred to by Derek Shepherd (Letters, 23/12) would be unacceptable. But politicians and civil servants are human, with all the failings that brings.

As the coronavirus took hold, if the federal government had been able to prevent the actions that were taken by the states, which plainly they were trying to do, then we would probably be in a similar situation as Boris’ Britain and Donald’s un-United States.

If the policies that made the situation in the late 1980s, early 1990s in Victoria worse than in the rest of Australia, had been applied nationwide by a centralised government, all of Australia would have been in dire straits, not just Victoria.

And with a federal government that seems to be promoting the short-term interests of major donors, it is largely the actions of state governments, some companies and private citizens that are addressing the reality of climate change and the need to move to a sustainable economy.

As in biology, there is resilience in diversity, and that too must be considered, if and when the question of federation in Australia is ever put to the people.
David Williamson, Hampton Park 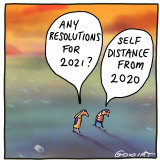 Hello, goodbye
So glad Melbourne is not ushering in 2021 with a mega-polluting event. No fireworks is a relief for the waterways (where poisonous residue falls) and the air.
Rilke Muir, Kensington

2020 was a year when banks had notices prohibiting customers from entering wearing motorcycle helmets while having notices demanding that masks be worn.
Malcolm Just, East St Kilda

Willing workers
A lack of fruit pickers. How about the refugees still locked up in hotels? Surely they have been in quarantine long enough to qualify?
Elizabeth Meredith, Surrey Hills

So Jeff Kennett wants a royal commission into handling COVID-19. Will this include his closure of the Fairfield specialist infectious diseases hospital?
Jeffrey Newman, East Ivanhoe

Cricket
It seems the criterion for playing Test cricket for Australia is not to make runs.
Brian Morley, Donvale

Joe Burns and Travis Head keep reminding us of the old saw that it’s harder to get out of our Test team than to get into it.
John Walsh, Watsonia

Furthermore
I think Trump is fibbing about his golf handicap. He always seems to be in the ‘‘rough’’.
Gary Bryfman, Brighton

The PM’s ‘‘unfunded empathy’’ jobseekers should be grateful. They will be protected by the billion-dollar investments in fighter aircraft and state-of-the-art submarines.
Bob Jeffs, Mooroolbark

I wonder how Reignite Democracy would have reacted to the Black Death. ‘‘’Tis but a scratch’’?
Les Aisen, Elsternwick