The daily press conferences which became a fixture of the crisis and only ceased last week were watched by millions of people.

Number 10 apparently believes continuing with such events will ‘introduce a culture of transparency and openness’ and help keep the public better informed.

The televised press briefings will take place in the afternoon and will be hosted by an experienced broadcaster. 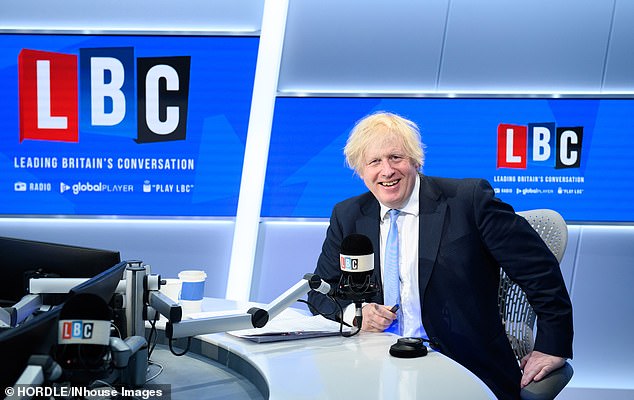 Boris Johnson, pictured during an appearance on LBC Radio this morning, is set to introduce televised daily press briefings from October, according to reports 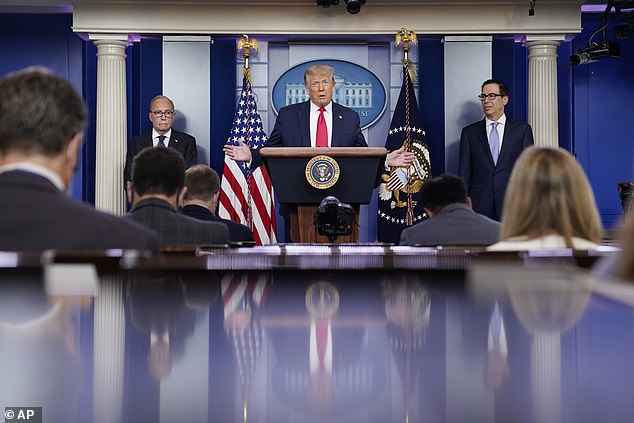 The briefings will inevitably draw comparisons to daily press briefings at the White House which see reporters grill the president of the day’s press secretary. Donald Trump is pictured in the White House press room yesterday

They will replace one of the two daily off camera briefings with the Prime Minister’s Official Spokesman which were attended by political journalists before the deadly outbreak.

A morning off camera briefing for reporters will continue as normal, according to The Times.

Televised press briefings have long been in existence in the US, allowing journalists to grill the president of the day’s press secretary.

However, the move by Downing Street to follow suit could prove controversial, with Tony Blair and Gordon Brown both having toyed with the idea before deciding not to go ahead with it.

While some will welcome it as potentially good for transparency critics will be concerned that time constraints could lead to questions being curtailed.

A Downing Street source told Politico: ‘The daily COVID press briefing showed there is a huge public appetite for more information about what the government is doing and why, and we want to continue with the accountability and transparency they provided.’

The briefings are expected to take place in Number 9 Downing Street which will be transformed into a media suite – like the one at the White House.

The recruitment process for the host broadcaster will get underway this month ahead of a scheduled launch in October.

Number 10 is also believed to be pushing ahead with a shake up of Whitehall communications teams.

Currently there are 4,000 communications workers across the government but a significant number of jobs are expected to be axed.

Each department will be limited to having a maximum of 30 communications staff.

Meanwhile, the chain of command will also reportedly be changed so that all press offices in Whitehall will be directly answerable to the Cabinet Office rather than to someone within their department.