SEOUL, South Korea – North Korean and U.S. officials are holding "behind-the-scenes talks" to arrange a third summit between President Donald Trump and North Korean leader Kim Jong Un on the fate of the North's expanding nuclear arsenal, South Korea's president said, four months after a second meeting between the leaders in Hanoi collapsed without any agreement.

There have been no public meetings between Washington and Pyongyang since the breakdown of the Hanoi summit. But the prospects for a resumption of U.S.-North Korea diplomacy have brightened since Trump and Kim recently exchanged personal letters. Trump called Kim's letter "beautiful" while Kim described Trump's as "excellent," though the contents of their letters have not been disclosed. 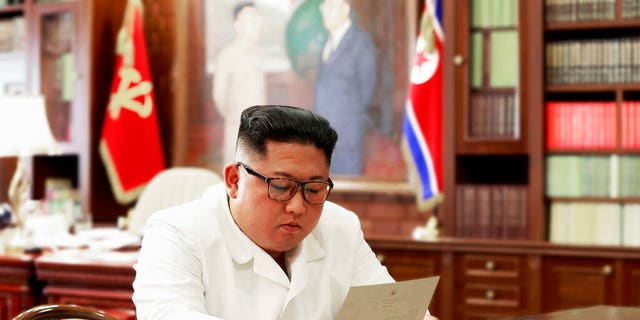 In a response Tuesday to questions by The Associated Press and six other news agencies, South Korean President Moon Jae-in said that Trump's and Kim's "willingness to engage in dialogue has never faded" and that their recent letter exchanges prove that.

Moon, a liberal who met Kim three times last year, has made dialogue with the North as a route to forging peace on the Korean Peninsula a centerpiece of his presidency. He has played a central role in facilitating U.S.-North Korean negotiations, even if those efforts have at times been overshadowed by the Trump-Kim talks that he helped broker.

Moon said he doesn't see the Hanoi summit as a failure. He said he thinks the meeting served as a chance for both Washington and Pyongyang to better understand each other's positions and "put everything they want on the negotiating table."

"The success of denuclearization and the peace process on the Korean Peninsula cannot be determined by a summit or two," Moon said, adding that discussions in Hanoi will form the basis for future talks. "Both sides clearly understand the necessity for dialogue," he added.

Despite the deadlocked nuclear negotiations, both Trump and Kim have described their personal relationship as good. When asked whether Kim's recent letter included a mention about another summit, Trump said, "May be there was."

"But we, you know, at some point, we'll do that," Trump told reporters at the White House on Tuesday. "Getting along very well. He's not doing nuclear testing," he said.

In yet another reminder of North Korea's continued mistrust of the United States, its foreign ministry said earlier Wednesday it won't surrender to U.S.-led sanctions and accused Washington of trying to "bring us to our knees."

Kim has said the North would seek a "new way" if the United States persists with sanctions and pressure. Following his setback in Hanoi, Kim traveled to the Russian Far East in April for his first summit with Russian President Vladimir Putin. Kim also hosted Chinese President Xi Jinping in Pyongyang last week for their fifth summit since March last year, and experts say the North's outreach to its traditional allies is aimed at strengthening its leverage with the Trump administration.

Moon said he views the North's expanding diplomacy with Beijing and Moscow as a positive development in efforts to resolve the nuclear standoff.

"China and Russia have continued to play constructive roles so far to peacefully resolve the Korean Peninsula issue," he said. "I hope that China and Russia will play specific parts in helping the North resume dialogue at an early stage."

Moon didn't elaborate whether U.S and North Korean officials had face-to-face meetings and if so where they took place. He also didn't clarify who were interlocutors or how close they were in setting up a third Kim-Trump summit.

Trump's top envoy on North Korea, Stephen Biegun, is to visit South Korea on Thursday, and some experts said he may use his trip as a chance to meet North Korean officials at a Korean border village. Secretary of State Mike Pompeo said Sunday the U.S. was prepared to resume talks with North Korea "at a moment's notice" if the North signaled it wanted discussions about denuclearization.

Despite a possible restart of negotiations, it's still unclear whether Washington and Pyongyang can eventually achieve agreements that can satisfy both sides. The Hanoi summit fell apart after Trump rejected Kim's calls for major sanctions relief in return for dismantling his main nuclear complex, something that U.S. officials see as a partial denuclearization step. 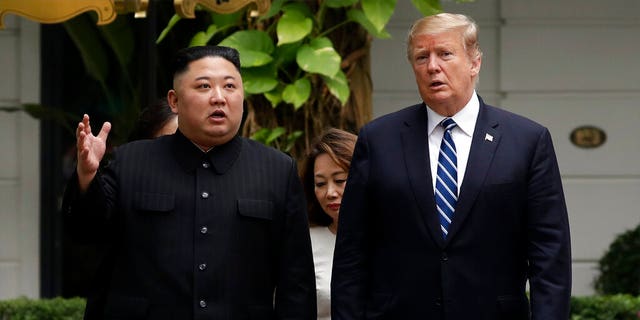 Kim has since fired missiles and other weapons into the sea and asked Trump to work out mutually acceptable agreements by the end of this December. U.S. officials maintain sanctions on North Korea would remain in place until North Korea takes significant steps toward nuclear disarmament.

North Korea has long bristled at the significant U.S. military presence in South Korea, and wants assurances it will not be targeted by the U.S. and South Korea. It sees its pursuit of nuclear weapons and ballistic missiles as an insurance policy against military action.

In his written replies, Moon said he has found Kim to be a "flexible yet resolute person" during their talks. He said he believes that Kim's "unequivocal resolve is to move from the past to the future" by pursuing economic growth over building up a nuclear arsenal.

The South Korean leader repeated that Kim has never linked denuclearization with South Korea's military alliance with the U.S. or a pullout of American troops when they met.

Separately from the unofficial Washington-Pyongyang talks, Moon said the two Koreas have also been holding dialogue via unspecified "diverse channels" and repeated that he's ready to meet Kim again at any place and time.

"It depends on Chairman Kim Jong Un," Moon wrote. "I am prepared to meet with Chairman Kim in person at any given moment without being restrained by time, place or formalities."

Last year saw a flurry of inter-Korean exchanges and cooperation programs between the Koreas, which have been split along the world's most heavily fortified border since the end of the 1950-53 Korean War. But North Korea has significantly reduced its dialogue and engagement with South Korea since the end of the Hanoi summit.

South Korea is now solely proceeding with a search of Korean War dead at the border, which it was supposed to jointly conduct with North Korea. North Korea has also ignored South Korean proposals for joint efforts to stem the spread of highly contagious African swine fever following an outbreak in the North.

Moon, who has stressed that South Korea should be in the "driver's seat" in international efforts to deal with North Korea, reiterated his view that the resumption of inter-Korean economic projects currently held back by the U.N. sanctions would help induce further denuclearization steps from the North. Following the Hanoi summit, Moon had said Seoul would "consult" with Washington on resuming operations at an inter-Korean factory park in the North Korean border city of Kaesong and restarting South Korean tours to the North's scenic Diamond Mountain resort.

While acknowledging that the resumption of such joint inter-Korean projects would depend on a substantive progress in U.S.-North Korea talks, Moon said improved economic relations between the Koreas would be "conductive" to the larger nuclear negotiations.

He said that the dismantling of the Yongbyon nuclear complex, which Kim offered in Hanoi, could mean that the North's denuclearization process has entered "an irreversible stage" if it's completely demolished and verified. He said "substantive process" in U.S.-North Korea diplomacy could also help the international community seek a partial or gradual easing of the U.N. sanctions.

Yongbyon has facilities to produce both plutonium and highly enriched uranium, two key nuclear ingredients. North Korea has called the complex "the heart" of its nuclear program, while many outside experts say it's an aging facility and that North Korea is believed to have additional multiple secret uranium enrichment facilities.

Moon repeated earlier claims that Kim has genuine willingness to trade his nuclear weapons for economic and security benefits, but that it would be important to create an environment where the North could focus on taking relevant steps toward disarmament.

"Chairman Kim should be helped along the path toward that goal in a way that sustains his commitment to nuclear dismantlement," Moon wrote. "I think creating a security environment where Chairman Kim can decisively act on nuclear dismantlement without worries is the fastest way to achieve denuclearization diplomatically," Moon added, without specifying the security concessions Washington and Seoul could make.