Police stop eco-mob BEFORE they can strike: Officers swoop on Insulate Britain activists as they attempt to halt rush-hour traffic at J23 on M25

Police officers swooped to haul away a group of Insulate Britain eco zealots today before they even made it onto a major junction of the M25 during the morning rush hour.

The environmental activists hoped to blockade the motorway at junction 23 for the South Mimms service station in Hertfordshire, but police stopped them getting onto the road before they could cause mayhem.

The protesters were carrying out their 17th day of road demonstrations in seven weeks. A Hertfordshire Police spokesman said: ‘Police were called at 7.45am today to reports of protestors near junction 23 of the M25. Officers are at the scene and working to resolve the disruption as quickly as possible. Several people have been arrested.’

Insulate Britain has brought chaos to motorways and A roads across the capital since September 13 with 146 people taking part in the campaign and 749 arrests made so far – but no one has yet been charged.

The activists were effectively banned from all major roads in England on Monday last week after a major High Court ruling, and a hearing was told just three days of their protests had an ‘economic cost’ of almost £900,000.

But their protests have continued regardless – and over the weekend Greta Thunberg voiced support for their tactics, saying sometimes you have to ‘p*** people off’ to protect the environment. 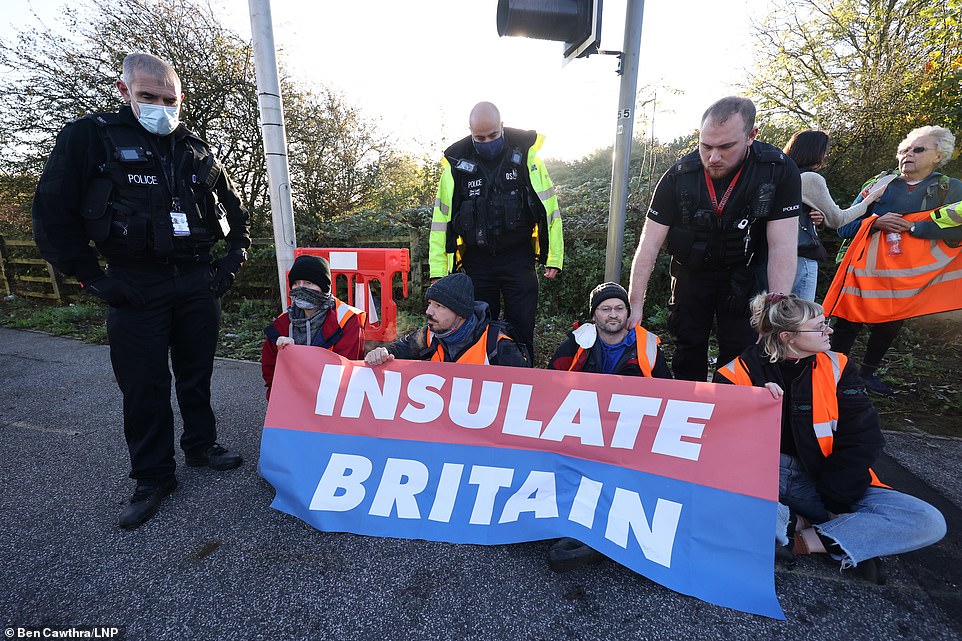 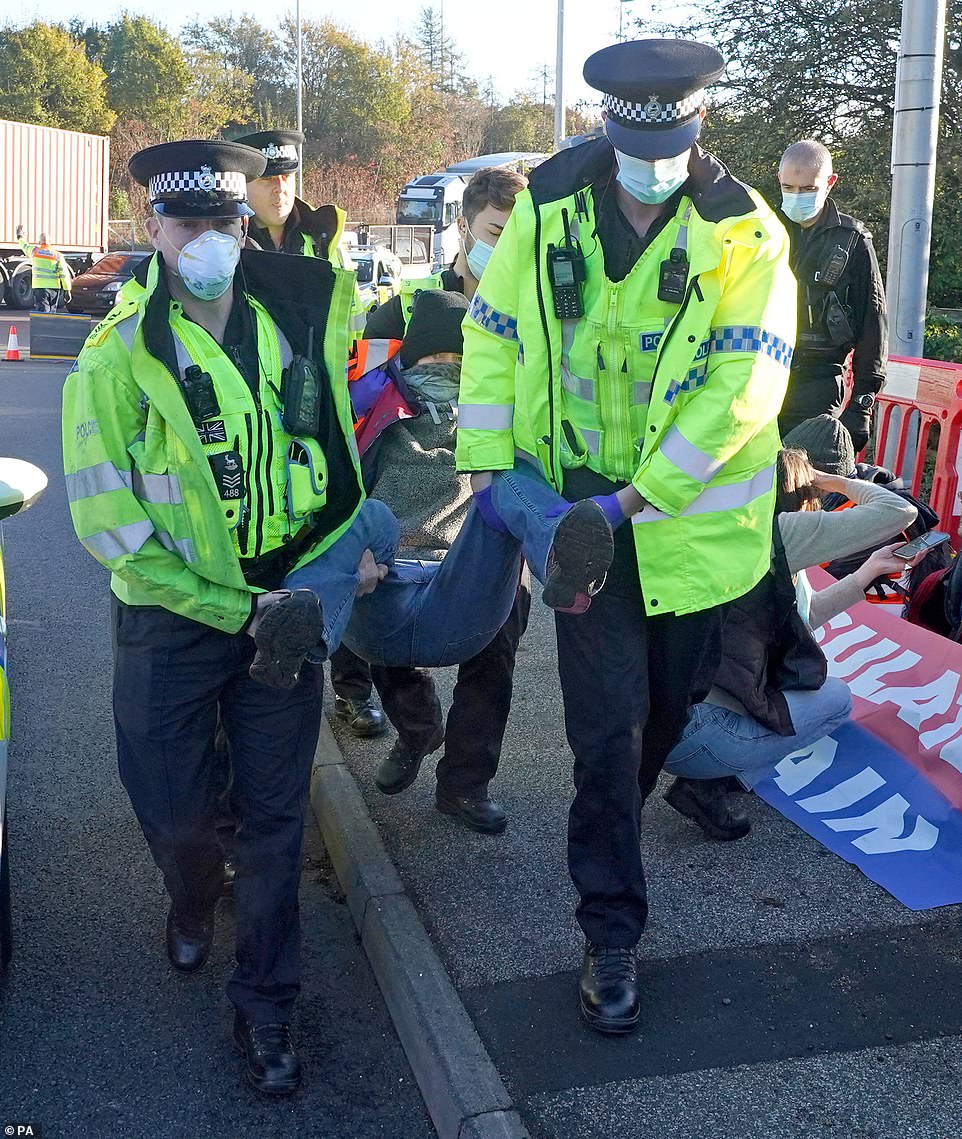 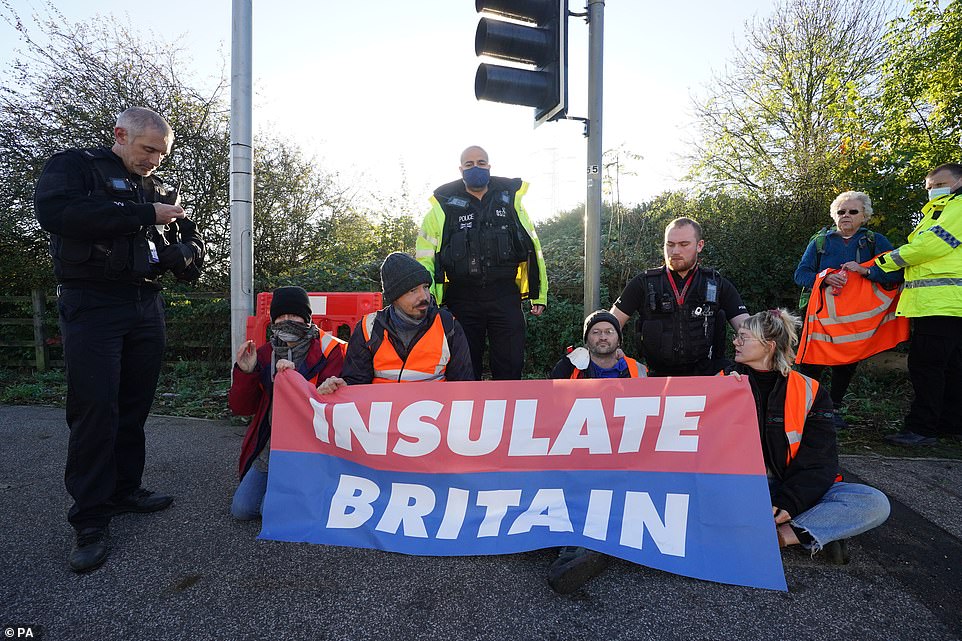 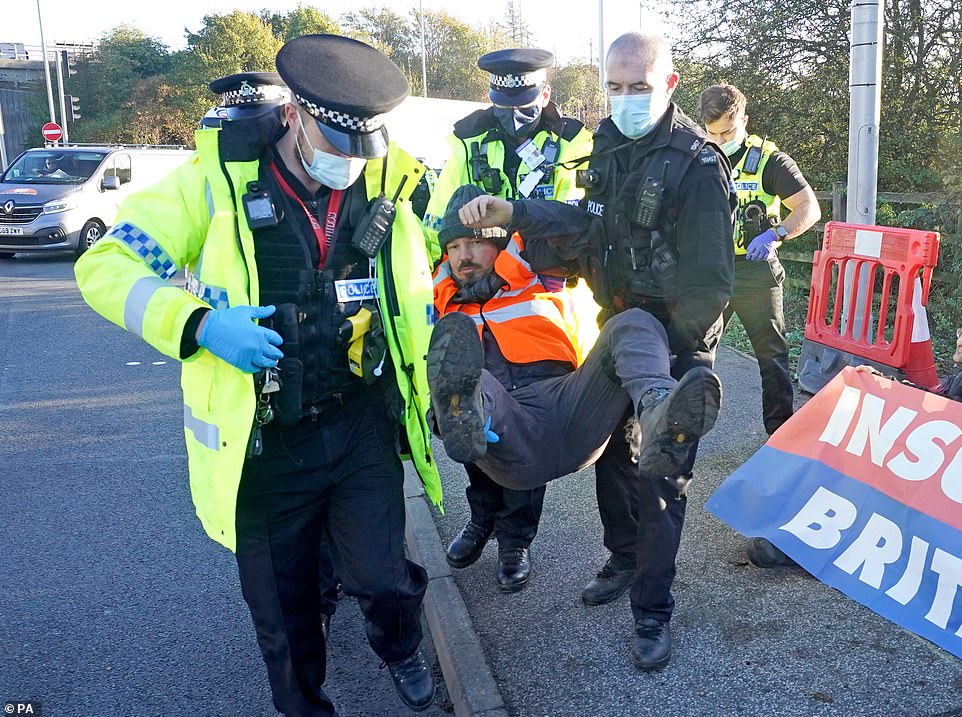 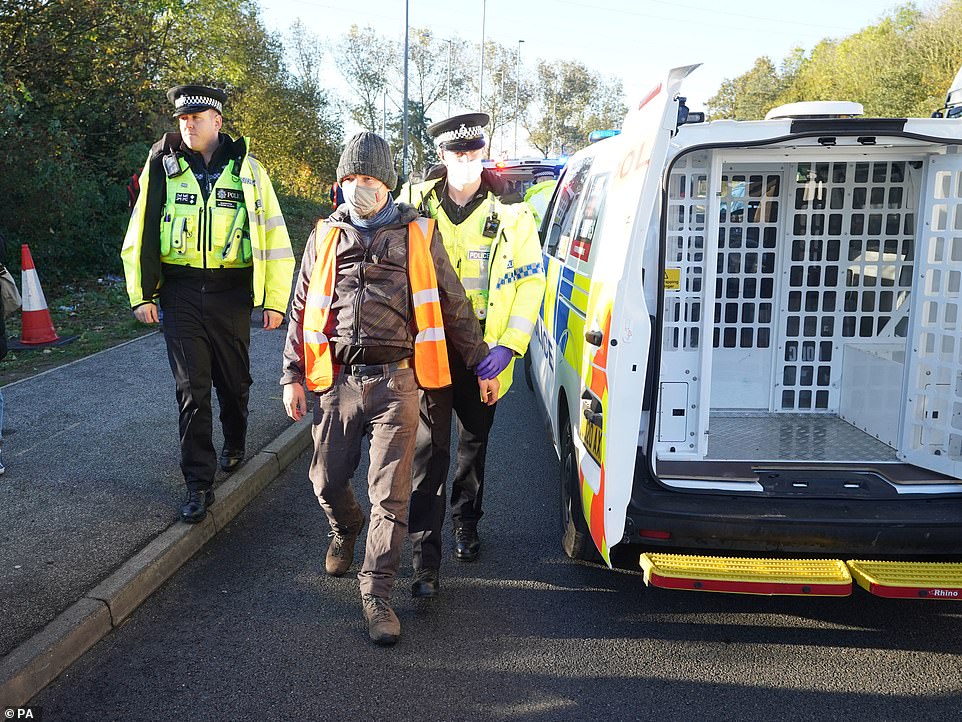 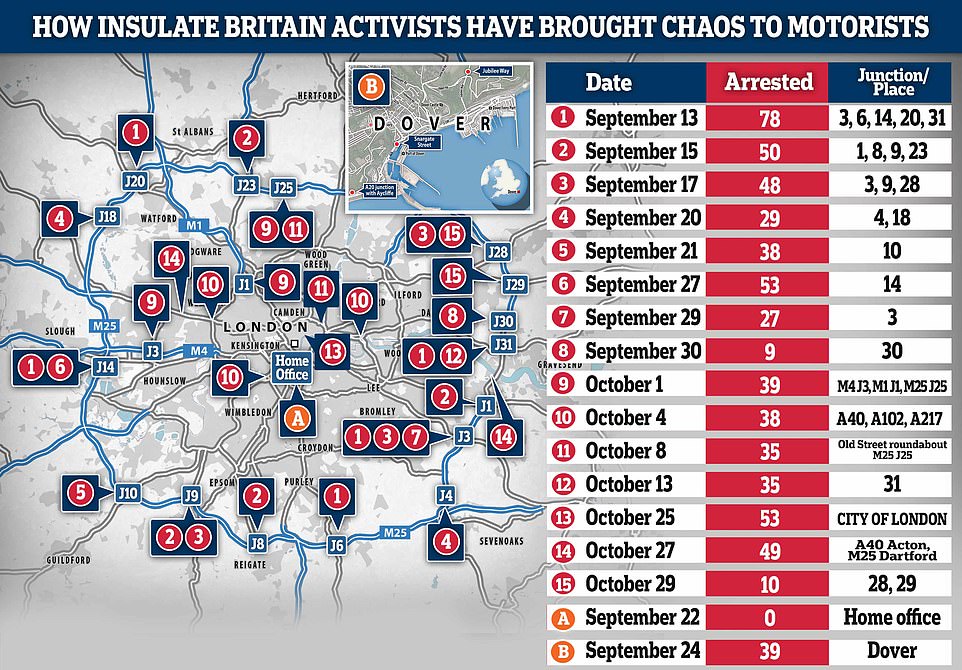 The Swedish activist spoke out as representatives of 200 nations gather in Glasgow to thrash out a deal to try to limit global warming to 1.5C at the landmark Cop26 climate change conference.

The 18-year-old was asked on the BBC’s Andrew Marr Show on Sunday whether ‘blocking roads’ was justified, and replied: ‘To make clear, as long as no one gets hurt… then I think sometimes you need to anger some people.

Insulate Britain: How activists have made a mockery of the law

September 21 – Protesters risk death by running into moving traffic to block the carriageway near Junction 10. Some 38 arrests are made. National Highways obtains an injunction against further protests on the M25

September 22 – Protesters burn copies of the injunction outside the Home Office, blocking the road outside the ministry. No arrests are made

September 24 – 39 protesters arrested after blocking roads at three locations in Dover. They are all released under investigation. National Highways obtains a second injunction covering Dover.

September 27 – 53 protesters are arrested for blocking a slip road at Junction 14 of the M25. They are all released under investigation.

September 30 – Protesters return to junction 30 at Thurrock in Essex, and nine are arrested

October 2: Third injunction bans them from obstructing traffic and access to motorways and major A roads in and around London

October 4: 38 arrests after protesters block three major roads in London – the Blackwall Tunnel, Wandsworth Bridge and A40 and North Circular at Hanger Lane.

October 8: 19 arrested over protest at Old Street roundabout and a further 16 on the M25 at junction 24. Transport for London gets a High Court injunction to ban them from obstructing traffic in 14 locations in London.

October 13: Protesters return to the M25 at junction 31 and a nearby industrial estate, with 35 people arrested.

October 27: Protesters blockade the A40 in North Acton, West London, and a major roundabout next to the Dartford Crossing in Kent. Kent Police arrested 32 protesters, while the Metropolitan Police detained 17.

October 29: 10 activists are arrested after walking onto the M25 between junctions 28 and 29 in Essex

November 2: Police arrest activists before they can even get onto the M25 at junction 23 for South Mimms

‘Like, for instance, the school strike movement would never have become so big if there wasn’t friction, if some people didn’t get p***** off.’

She said she speaks to activists in countries like China where they do not have the same rights, and added: ‘It makes you just feel so grateful that we are actually able to protest and that just puts more responsibility on us who actually have the right to protest, to use that right.’

Last Friday, Insulate Britain caused yet more traffic chaos and diced with death by walking onto the M25 in morning rush hour. They later boasted about causing ‘major disruption in several locations’ on the motorway.

A group of 14 walked up and down the painted white lines between lanes in live traffic, causing tailbacks. At one point, three sat and laid down in the middle of the carriageway, bringing traffic grinding to a halt.

In a press release the group said activists had gone ‘walking on the motorway’ and were ‘demanding that the Government gets on with the job of insulating Britain’s homes’. Ten arrests were made after the stunt, between junctions 28 and 29 near Brentwood in Essex.

The group acknowledged it is knowingly breaching a High Court injunction that aims to prevent its disruptive activities. The activists were effectively banned from all major roads in England last week after a court ruling approved an injunction against protests on 4,300 miles of motorways and A-roads, also known as the Strategic Road Network.

This was extended until November 11 at another hearing on Thursday. Breaking the injunction can lead to unlimited fines or even jail for contempt of court.

The High Court was told on Thursday how just three days of protests had cost taxpayers almost £900,000.

It wants this done by the end of the decade, with a ‘legally binding’ national plan published within four months. They claim it would avoid 8,500 deaths due to fuel poverty and help struggling families pay their energy bills.

Cabinet minister George Eustice has condemned the eco mob’s actions as ‘highly irresponsible’, ‘a safety risk on our roads’ and said Home Secretary Priti Patel was looking at beefing-up the law to give police more powers to tackle the protesters.

Last week the Daily Mail revealed that eco warriors are plotting to exploit gaps in Scottish law to wreak havoc at the Cop26 summit.

Conspirators noted a recent High Court injunction banning road blockades does not apply in Scotland – and that officers will be ‘overwhelmed’ by the scale of the protests.

It was also hinted protesters with charges against their name in England may get a blank canvas across the border as forces ‘don’t always communicate to each other’.

It comes amid growing alarm among rank-and-file officers about the potential for chaos as police brace for the ‘most complex and complicated policing operation ever seen in Britain’.

Hundreds of thousands of protesters from around the world are expected to descend on the two-week summit. XR’s Scottish spokesman Myke Hall has said ministers should be ‘very worried’ about their plans to disrupt the event.

Top brass in Scotland have warned Cop26 could prove a magnet for anarchists and believe some extremists could use children as human shields during violent standoffs, a tactic seen during the storming of the Capitol in the US in January. 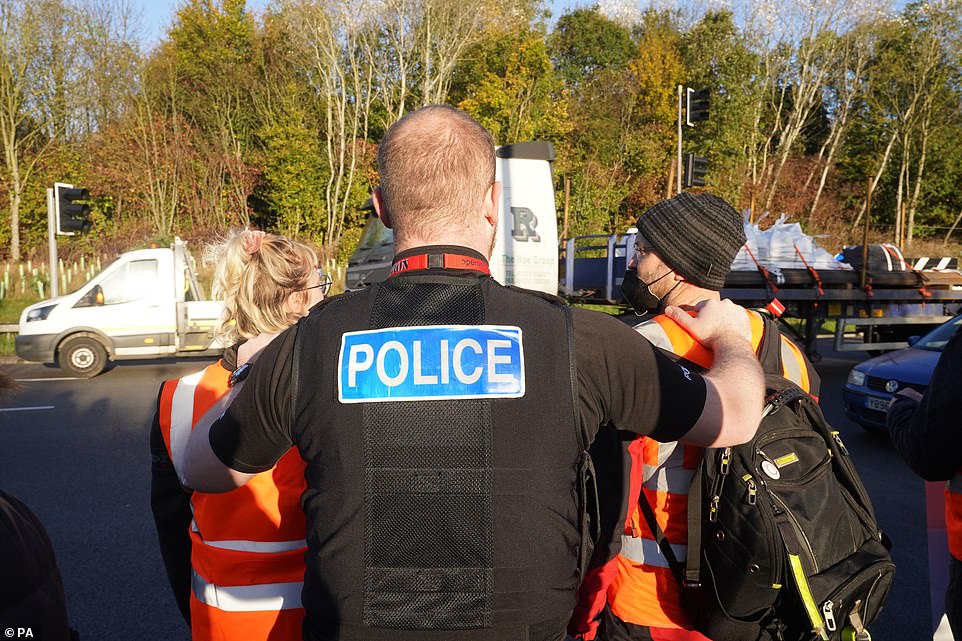 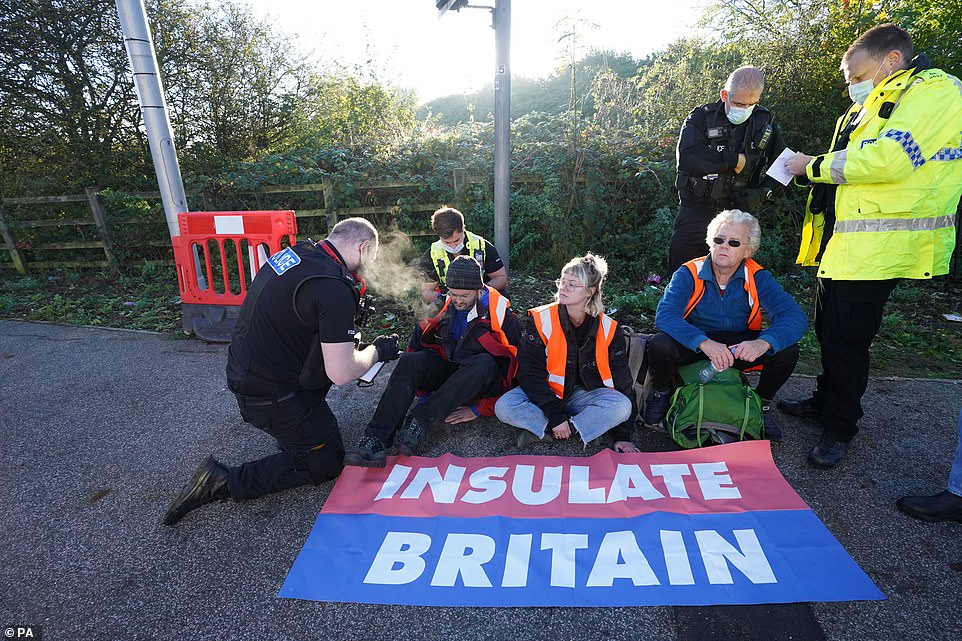 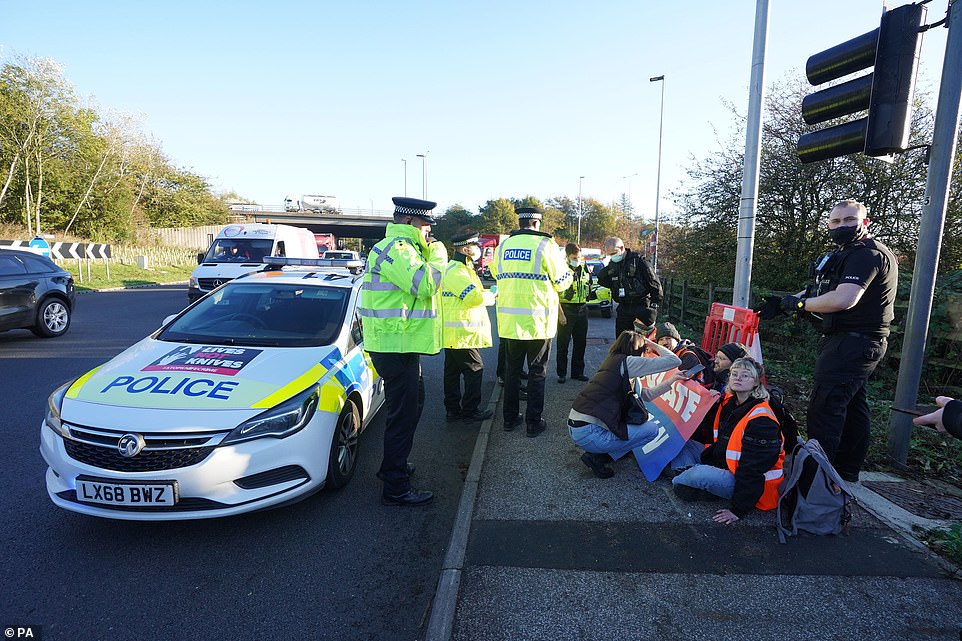 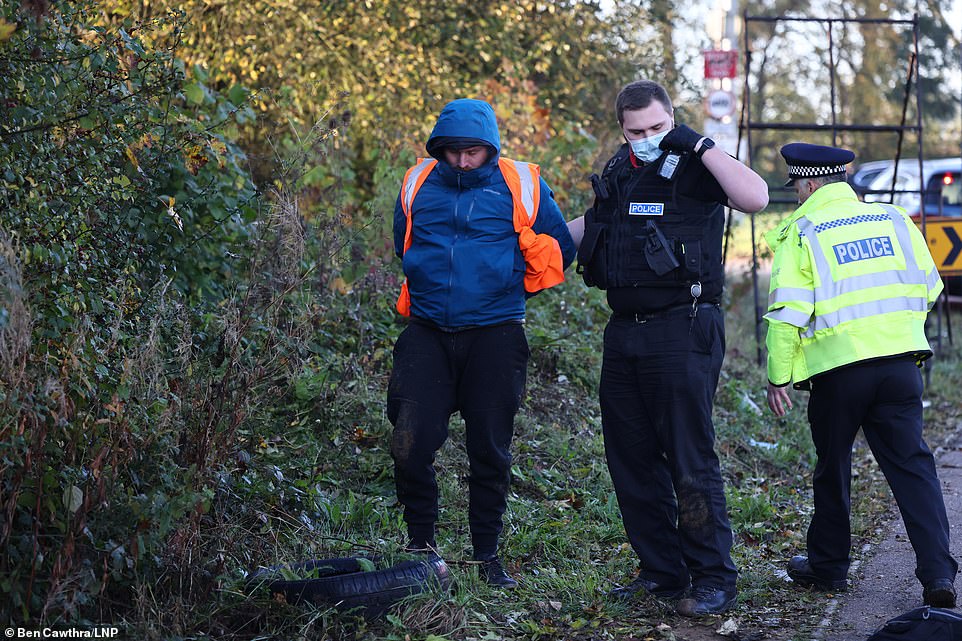 At the start of the two-hour protest meeting last Tuesday, attendees were asked ‘not to say anything specific about actions that you have been involved with, or are planning’, due to fears of infiltration within the group.

But during an extensive Q&A session, rebels probed potential weaknesses in the police and criminal justice system that hinted at plots to blockade roads and outwit officers.

Know Your Rights Training was provided by the Scottish Community and Activist Legal Project, which is providing legal support to XR during Cop26.

Representatives fielded a series of searching questions including whether an injunction against road blockades aimed at curbing Insulate Britain protests in England applied in Scotland and if protest-related charges in England would be passed on to Police Scotland.

A spokesman said the injunction did not apply in Scotland, while it was also suggested police will only make arrests ‘if they need to’ for fear of being ‘overwhelmed’.

John Scott QC, an adviser to Police Scotland on Cop26, told the Mail ‘there is a very different tone and style’ to policing in Scotland, ‘with an emphasis on encouraging peaceful protest’.

But there are fears protesters who break the law could go free as a shortage of cells could force police to let some off with warnings.

One demonstration on November 6 is expected to attract more than 150,000 protesters and smaller groups such as Insulate Britain are expected to take part in acts of disorder, which could result in a significant number of arrests.