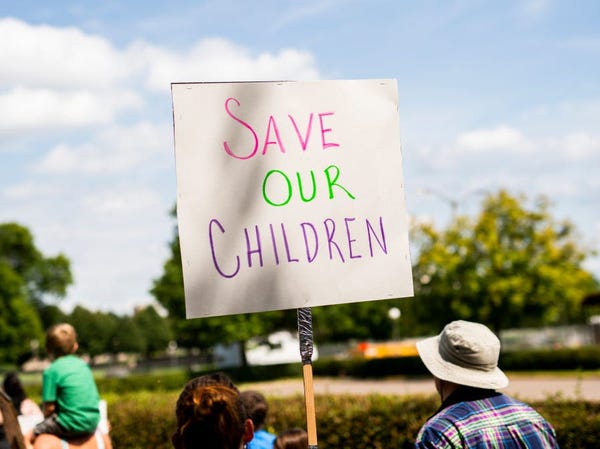 An Oklahoma man accused of killing his girlfriend's 10-month-old infant has repeatedly made Facebook posts in support of the #SaveOurChildren movement, which is linked to the QAnon conspiracy theory.

The man, Joshua Jennings, 33, was arrested by the Canadian County Sheriff's Office in El Reno, Oklahoma, Friday on charges of first-degree murder.

The Oklahoma City Police Department said in a statement provided to Insider that the infant, the child of Jennings' girlfriend, was brought to the emergency room with critical injuries before she died.

Insider has reviewed several posts from the Facebook page that appears to belong to Jennings promoting the "Save Our Children" or "Save the Children" movement, which has recently been co-opted and amplified by QAnon conspiracy theorists.

The QAnon conspiracy theory centers on the belief that President Trump is fighting to destroy a deep-state cabal of elite figures who run a child trafficking ring. That obsession with false allegations of human trafficking, which experts say is misguided, has helped bolster QAnon throughout the country and the world, as the easily digestible anti-pedophilia messaging spreads rapidly.

Jennings appeared to become interested in the movement in August, when the QAnon rebrand started to take over social-media platforms, particularly Facebook.

Jennings does not appear to have directly referenced QAnon on his Facebook page.

On August 12, Jennings wrote, "This #SaveOurChildren movement train I will GLADLY hop on."

The next day, Jennings shared someone else's post that again referenced murder. "I'd kill for your kid, I hope you'd do the same for mine," it said.

While the rest of Jennings' Facebook page is largely innocuous, one April 2016 post said, "F—ing pissed right now… It's going to take a miracle for me to not go to prison for murder tonight."