President Trump and first lady Melania Trump traveled to Shanksville, Pa., on Friday to participate in a solemn ceremony honoring the 40 passengers and crew of Flight 93, which crashed into a field there on Sept. 11, 2001.

Trump spoke after their names were read. Two bells tolled after the reading of each name.

“Nineteen years ago, on this day, at this hour, on this field, 40 brave men and women triumphed over terror and gave their lives in defense of our nation,” Trump said. “The heroes of Flight 93 are an everlasting reminder that no matter the danger, no matter the threat, no matter the odds, America will always rise up, stand tall and fight back.”

Trump made a point to honor those whose lives have been lost since 9/11.

“We express our undying loyalty to the nearly 6 million young men and women who have enlisted in the United States armed forces since Sept. 11, 2001,” he said. “More than 7,000 military heroes have laid down their lives since 9/11 to preserve our freedom. No words can express the summit of their glory or the infinite depth of our gratitude. But we will strive every single day to repay our immeasurable debt and prove worthy of their supreme sacrifice.”

It was Trump’s second visit to the Shanksville memorial as president. He previously visited the site on Sept. 11, 2018.

En route to Shanksville aboard Air Force One, the president and first lady observed a moment of silence at 8:46 a.m. ET, the moment the first hijacked plane struck one of the two World Trade Center towers. 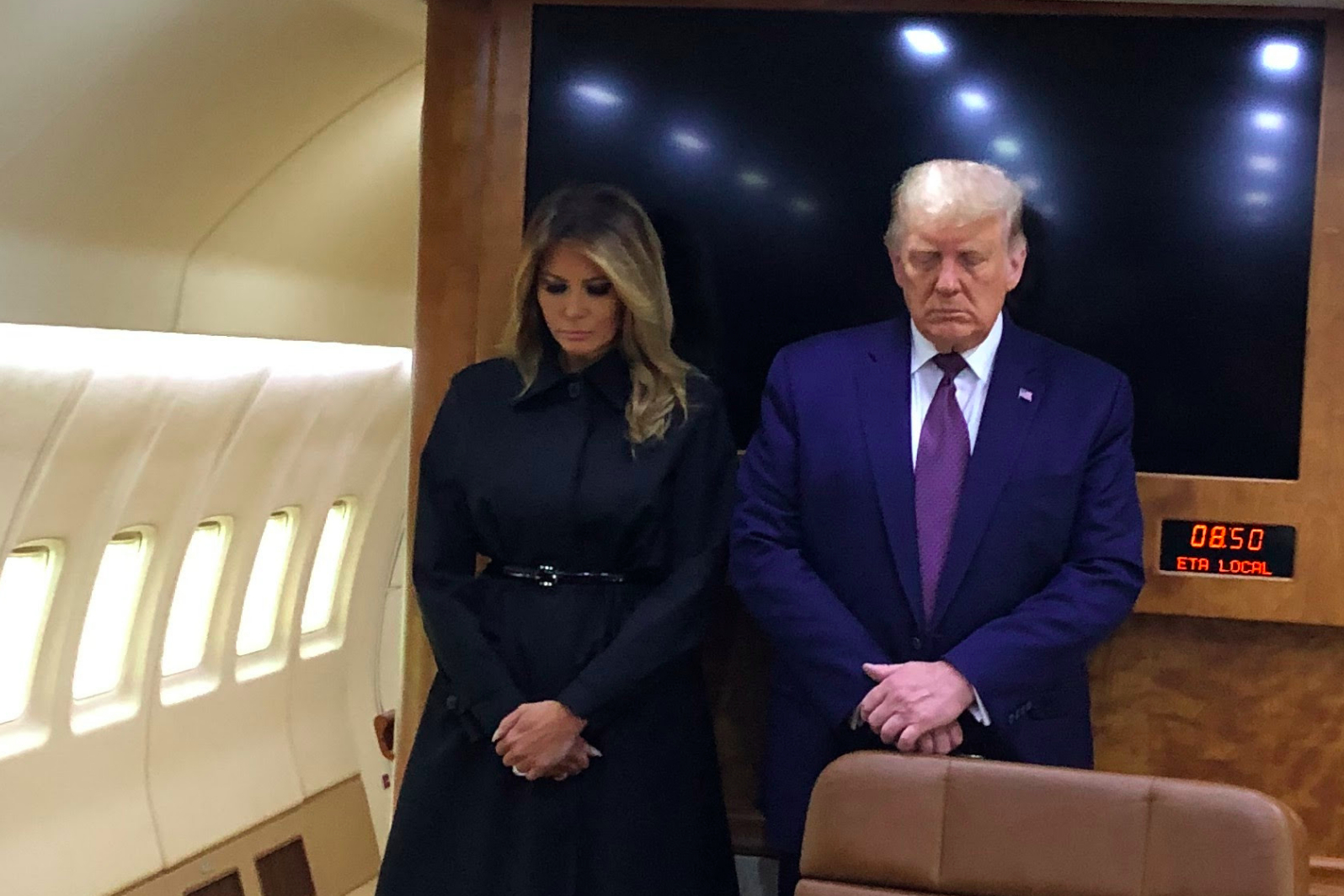 In New York City, both Vice President Mike Pence and former Vice President Joe Biden attended a ceremony at the World Trade Center memorial site in lower Manhattan. Pence and Biden, who were both wearing masks due to the ongoing coronavirus pandemic, spoke to each other briefly and touched elbows.

That ceremony also included a moment of silence at 8:46 a.m., followed by a prerecorded reading of the names of the nearly 3,000 victims inscribed in bronze at the memorial.

Organizers opted for the recording rather than a traditional live reading of names out of concern over the spread of the coronavirus, which has killed more than 190,000 Americans.

Biden, who traveled to Shanksville on Friday afternoon, did not speak publicly at either ceremony.

“I’m not gonna make any news today,” he told reporters in Wilmington, Del., before departing for New York. “I’m not gonna talk about anything other than 9/11. We took all our advertising down. It’s a solemn day, and that’s how we’re going to keep it.”

Asked by a reporter at the New York City memorial what 9/11 means to him, Biden replied: “It means I remember all my friends that I lost.”

“It takes a lot of courage for someone that lost someone to come back today,” he explained. “I know from experience, losing my wife, my daughter, my son, you relive it, the moment, as if it’s happening. It’s hard. It’s a wonderful memorial, but it’s hard. It just brings you back to the moment it happened, no matter how long, how much time passes. So I admire the families who come.” 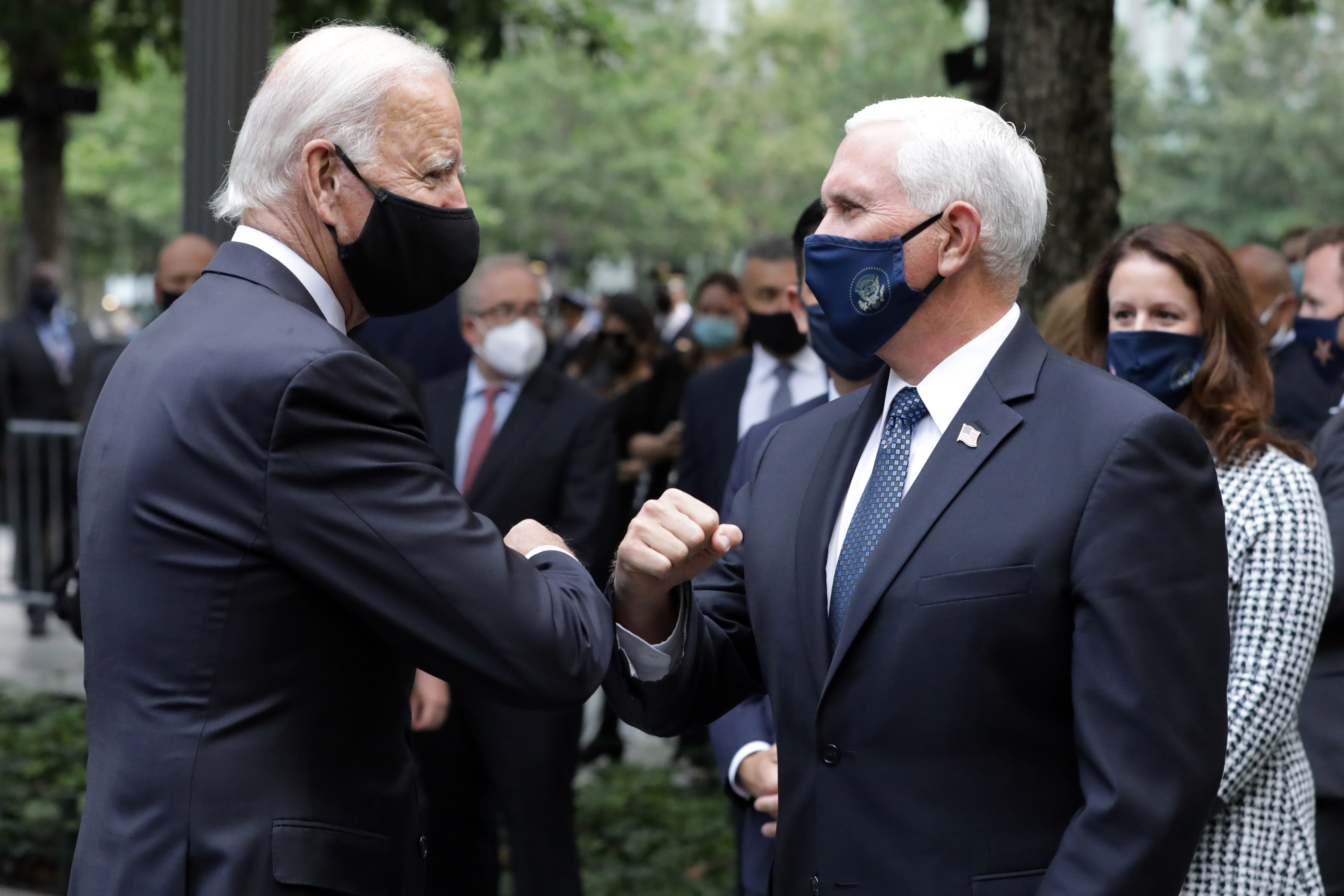 Pence attended a second event in New York honoring Stephen Siller, a firefighter — off duty that morning — who ran through the Brooklyn-Battery Tunnel to reach the towers and was killed in the collapse. The vice president delivered brief remarks that included a biblical verse.

Pence also made a stop at a firehouse near Ground Zero that was the first to respond to the attack. He spoke there too.

Pence’s remarks came amid a New York Daily News report that the Trump administration has “siphoned nearly $4 million away from a program that tracks and treats FDNY firefighters and medics suffering from 9/11 related illnesses.”

Sen. Kamala Harris, the Democratic vice presidential nominee, was in Fairfax, Va., where she spoke at an event honoring 9/11 victims and first responders.

Harris said the anniversary is a moment to remember the lives lost on 9/11 as well as to “remember who we are — we stand together.”

“As we honor them, let’s remember that,” she added, “about who we are as a nation.”

For the candidates, the 19th anniversary was less eventful than the 15th. That year, in 2016, both Trump and Democratic nominee Hillary Clinton attended the Ground Zero memorial in lower Manhattan. Clinton abruptly left the ceremony, complaining she was overheated, and was captured on video struggling to step into a van.

It was later revealed that she had been diagnosed with pneumonia.