Raleigh: About one in ten young adults in America think Jewish people caused the Holocaust, a new survey finds.

And 10 per cent of people in that age group say they don't believe that the Holocaust happened or aren't sure that it took place, the Conference on Jewish Material Claims Against Germany said in results published on Wednesday, local time. 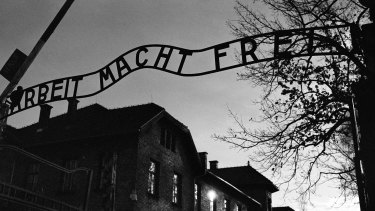 The main entrance at the former Nazi death camp of Auschwitz in Oswiecim, Poland, with the inscription, ‘Arbeit Macht Frei’, which translates into English as ‘”Work will set you Free”.Credit:AP

The findings come as almost half of Millennials and people in Generation Z reported seeing "Holocaust denial or distortion posts on social media" or elsewhere online, results from the organisation show. The Holocaust occurred around the time of World War II, when the German Nazis killed millions of people who were primarily Jewish as well as lesser numbers of other minorities.

In the United States, "there is a clear lack of awareness of key historical facts; 63 per cent of all national survey respondents do not know that six million Jews were murdered and 36 per cent thought that 'two million or fewer Jews' were killed during the Holocaust," the Claims Conference said in a news release.

When young adults were asked about their views, the survey found "23 per cent of respondents believe the Holocaust happened, but the number of Jews who died has been greatly exaggerated, is a myth and did not happen, or are unsure."

Groups have long said the Holocaust didn't exist, using the denial as a way to try to promote anti-Semitic views, according to the Southern Poverty Law Centre.

"Holocaust denial delegitimises the suffering of Jews, and exacerbates intergenerational traumas by denying Holocaust history, and codifies antisemitic propaganda under the guise of academic research," the centre said.

The Claims Conference, which calls the new survey results "shocking," says it negotiates "with the government of Germany for payments to Holocaust victims and for homecare funding for elderly survivors."

To conduct the survey, the Claims Conference says it worked with Schoen Cooperman Research to analyse "1000 interviews nationwide and 200 interviews in each state" conducted between February 26 and March 28. Phone and online responses were gathered from people ages 18 to 39, results show.

Our weekly newsletter will deliver expert analysis of the race to the White House from our US correspondent Matthew Knott. Coming soon. Sign up now for the Herald‘s newsletter here, The Age‘s here, Brisbane Times‘ here and WAtoday‘s here.